This is the eleventh section in the back-to-school series for PCB Designers and those who may want to know more about it.

Thanks for sticking with me after that brutal lesson on flex circuits. Those same FPC’s form the ABC’s of multi-board systems. The rigid-flex designs are a culmination of years of putting things together in the most efficient way. The efficiency comes in the use of less overall volume (without the connectors).

While those interconnects are typically small in number, there are exceptions when the flex zone ends up with hundreds of connections. All of the various rigid areas are driven off of the same schematic. The flexes in between go along for the ride. Going for the rigid/flex investment benefits by bringing all of those connections under one roof.

Part of that investment is the RFPC design time. Lately, that design time is at home. Whether you are doing the rigid-flex or separate rigid and flex boards, it’s going to require a crisp hand-off from mechanical outline to PCB design rules. Saved by the internet! We can screen-share anywhere.

Design Review on Day One?

Right after importing the outline geometry is a good time to ask for a screen share with the Physical Designer. Getting a view of the big picture where a flex circuit is shown folded into its final location is next. Finding out where she can give you a little more or not is helpful. Can the PD explain how it is assembled?

Can you follow pin one by net name through the system interconnects from end to end? There is board A connected to flex B on to board C. All the connections on the inter-board flexes are meant to be straight shots with all of the traces running side-by-side. A high number of flexes are built to translate between two incompatible connectors. By getting those two PCBs to join, there’s some kind of new function to be had. Solving those incompatibility problems with something that isn’t a “science project” keeps the FPC designers busy. This path is usually shorter than the one where the two original PCBs are combined as one - even if you own the IP for both.

Note that connectors and custom cabling can also save your project if the inter-board routing is somehow compromised. There is a lead time and a tooling charge that will be highly dependent on where you go to ask for a one-off or limited run of connectors. It might be easier than searching for all of the possible connector configurations related to your parameters. There are a staggering number of off-the-shelf connectors. Cabling them up one way or another is just a thing. Call it out correctly and you’re done.

I’ve found the most synergy is gained in the wireless sector or wherever we’re sensing things. Sensors and antennas are especially nice to isolate. Ever wonder where they put the Wi-Fi antenna on your phone or laptop? When we’re talking about the phone coexistence of all of the different radios is a real chore. The little antennas are scattered as much as can be. You have to use the Wi-Fi to get the stream and the Bluetooth to hand it off to the speaker. Solving that conundrum on a watch takes some flexibility and usually lots of time. 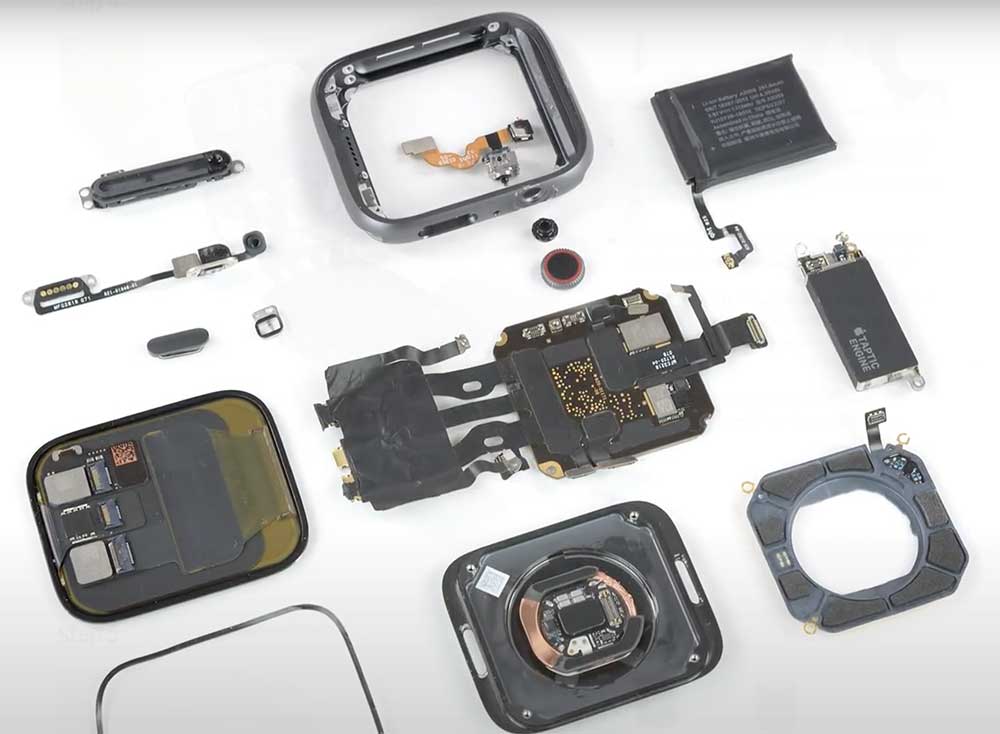 Figure 1. Image Credit: IFIXIT - A watch teardown shows several flex connectors and even a molded board on the left.

Whether it is capacitive charging or counting steps, the features run on some kind of hardware. It wouldn’t surprise me if the watch has a barometer. The integration of different circuit boards is astonishing. For a long time, all I wanted was for the housing of the device to be responsible for RF shielding. Just mold that shield into the cover!

They did that and more. Molded boards such as the one above and below are part of the external material. Several devices are mounted and routed. Of course, one-layer boards are the easiest. Note below a small PCB on the right and the housing both have a few components mounted. 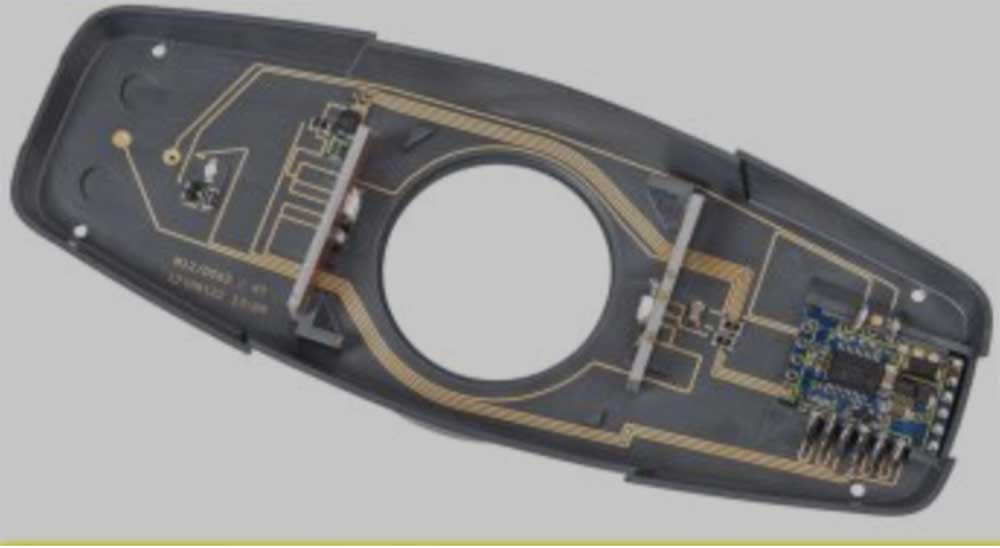 Two and three board systems are only the beginning. Before I got into PCB Design I was building seven-foot high equipment racks for AT&T. There would be six large card shelves stacked up between heat shields and a few two rack-unit enclosures. (1) Each of the shelves held two groups of eight boards plus a 48 VDC power supply.

That’s 54 big 10.5 x 14” boards and whatever was inside the smaller enclosures. Our little factory in Santa Clara stood up 350 of those racks in a quarter. An empty rack with just the back-panels (bristling with 640 pin connectors) sold for the price of a mid-size Mercedes.

Fill it up with analog to digital converters, D to A converters, modulators, demodulators, a very interesting analog T1 interface board and a couple of others. Now you’re talking about a mid-size Bay Area house. Times 350; all to become part of a massive multi-board system. The internet backbone is one wing of this system.

Once the internet was up and running, the world needed to shrink the computer and go mobile. So, after years of telecom, I got into consumer electronics. Below is a gut-shot of one of the laptops I got to do when I was with Google. We wanted the longest battery life, the highest resolution, the most accurate touch screen, etc, etc, etc.

The Pixel 2 laptop was a showcase of 2015 technology for developers to have all of the possibilities we could think of. My wife is not a developer but she uses hers every day. It still runs long, quietly, and cool with those two exhaust fans. Step 3 of the teardown instructions is optional but I highly recommend it. 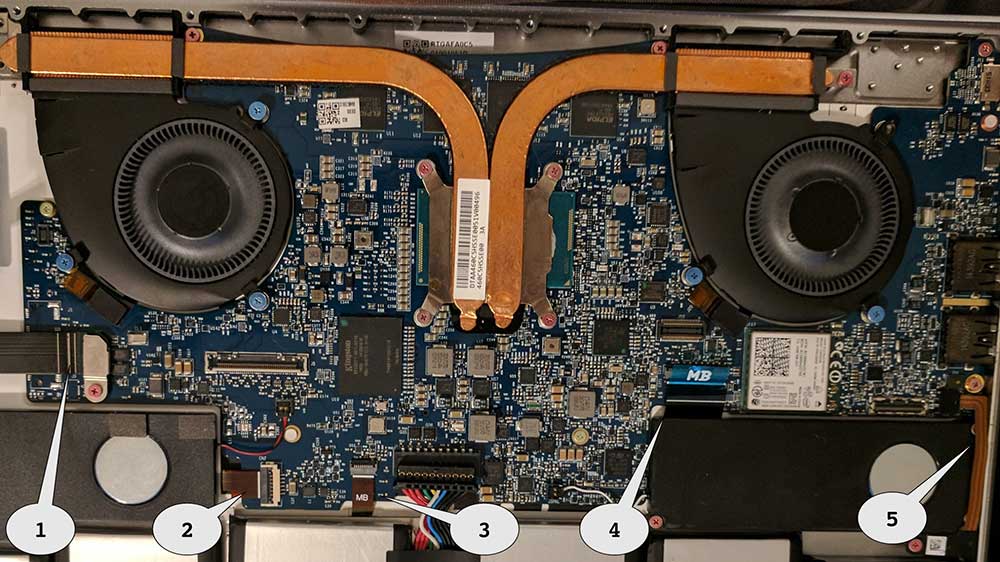 That first flex is special to me. One of the design goals was a rugged laptop. I don’t encourage you to try it but the laptop has been tested with a three-foot drop onto concrete. Drop it on it’s edge, on the corner, let it slam flat on the bottom or top first onto the concrete pad. Make note of whatever breaks and redesign it to be stronger. This laptop has a USB-type C connector on either side of the chassis; an industry first.

The one that is connected by the USB-flex failed when it became detached from the connector on the main logic card. As soon as I heard about the failure, I started re-routing all of the traces that passed by the board-to-board connector. Fortunately, a day later, the mechanical team came up with a one-screw solution that cantilevered out over the connector to keep it from disconnecting.

The thing we didn’t see coming was the stiffness of the flex. There are four superspeed lanes, two traditional USB 2 lanes, and two pairs of power pins along with ground. While only half of the connections are in use at any time, all of them have to be provisioned so that you can plug it in without wondering if it is upside down. A six-layer flex made sense but a wider four-layer FPC might have been better in hindsight.

So, when I’m looking at my wife’s laptop, I can picture the guts and plug into the USB port that is soldered directly to the main logic board. If you need to review section 10 on flexes, you’ll note that the USB flex image is that exact one. The Pixel doesn’t fall far from this PCB designer.

(1) Rack units are 1 ¾ inches high and 19 inches wide. The bolt pattern of the “rack ears” is common to many racked products like telecom but also pro-audio gear. Our shelves were six rack units and the boards were installed vertically like books but into card guides that aligned the board connectors with the back-plane connectors.

Next - Section 12 – PCB Design: How to Design For Test