This is the first section in the back-to-school series for PCB Designers and those who may want to know more about it.

The first thing to understand about printed circuit boards is the stack-up. A stack-up is made of alternating layers of conductors and dielectric materials. Most PCBs rely on dielectric material consisting of strands of glass woven into a resin material. Glass resin has insulating properties much like the fiberglass that is used in home insulation. While the home insulation uses air between the fibers, the stack-up employs certain types of resin and varying compositions of glass and other materials such as aramid paper.

Just as the clothing industry weaves cotton or synthetic materials in different ways, so too does the PCB industry. The nature of the resin and method of the weave are broken out into what is called slash sheets by the IPC. (1) They have two main documents that are relevant to rigid stack-up materials; IPC-4101 for typical materials and IPC-4103 for high speed/high-frequency materials. Flexible materials are catalogued in IPC-4102 and high density interconnect materials are covered by IPC-4104.

Calling out these materials is part of the fabrication drawing notes. The most famous PCB material is called FR4. If you want to have a clear note, avoid commercial terms like that and stick to specific terms like this. LAMINATE AND PREPREG MATERIAL SHALL BE WOVEN E-GLASS / EPOXY IN ACCORDANCE WITH IPC-4101/126. SEE STACK-UP DIAGRAM FOR DETAILS. 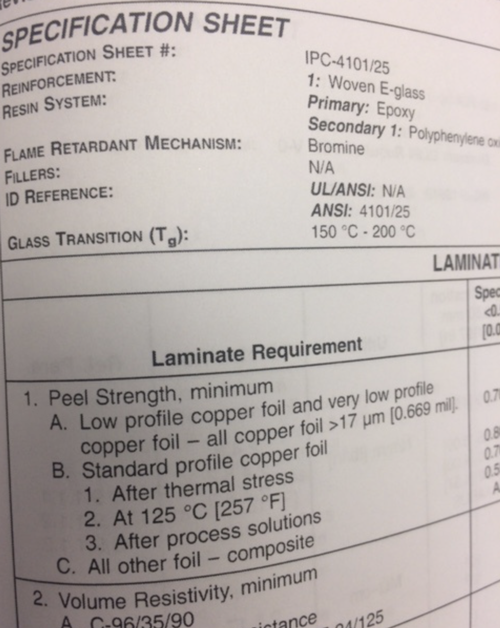 Establishing a set of dielectric materials in this way includes factors such as the maximum operating temperature and the coefficient of thermal expansion.

Calling these attributes out individually is more of a feel-good thing. Material will meet the Reduction of Hazardous Substances (RoHS) rules or it won’t. The slash sheets have that covered.

That statement comes from doing defense projects. In an alternate universe of reference designs or globally sourced boards, the words “OR EQUIVALENT” would follow the slash sheet designation. At that point, it becomes useful to spell out the attributes, especially the Tg minimum and the RoHS requirement.

Fab shops in other countries will use locally sourced materials that are similar but may not meet the high-temperature requirements for lead-free processing or may contain the bromides that are prohibited for mass production in Europe. The stack-up will be further described in a diagram that details the layer thickness of all dielectrics, copper, solder mask, and even ink if necessary.

Laminate materials come in two basic forms. The core material is a fully formed sheet with a cured layer of dielectric sandwiched between two layers of copper. Prepreg is basically a sheet of copper with an uncured layer of resin/fiber that is kind of like glue. A PCB stack-up is built around a core to which prepreg layers are added.

Higher layer-count stack-ups may have multiple cores with prepreg layers used to combine them. The variations are practically unlimited. Guessing the exact material layup that your vendor is going to use for a 24-layer board would be like winning the lottery. Even an eight-layer board can be stacked up a thousand different ways. Anything more than two layers means that I will defer to the vendor for the actual materials.

When it comes to flexible printed circuits, a whole list of possibilities are in play. In addition to the polyimide base material and copper, there is additional copper plating that is specified. From there, adhesive and coverlay are added. Where components and edge connectors reside, there are additional call-outs for more adhesive and stiffeners under the components as well as the solder mask and ink on the component side.

Flexes and rigid-flexes are distinguished by the fact that the stack-up normally varies from one location to another. All of these segments should be specified on the fab drawing and a separate stack-up diagram would be used for each area. It can also be handled in tabular form. There will be at least two areas and often more depending on the nature of the flexible printed circuit. We’ll get into these attributes along with bend regions and other design rules for flexes in another chapter.

The main thing that distinguishes a stack-up is the number of layers of copper. Although every PCB has a top and a bottom side, there are many PCBs that are considered to be one layer. All of the circuitry is located on the primary side. (2)

On a single-layer board traces that cross over are handled by routing one trace through a resistor while the other trace crosses between the pads of the resistor. Another option is to go around the long way or being creative with placement. Single layer boards are bound to be simple circuits. A lot of makers fabricate this type of PCB in their garage. A single-layer flex is often used as a custom flat cable.

The stack-up diagram will show the overall thickness along with the “weight” of the copper. This is a peculiarity of printed circuits where we refer to the thickness of the copper as a weight. If we took one ounce of copper and rolled it flat to the point where it covered one square foot, then the copper would end up being 0.0014 inches thick. That is one-ounce copper.

Copper weights can be less or more so we can work in fractions of an ounce or multiple ounces for higher current capacity. Note that thinner lines will require thinner copper to be producible. Half-ounce copper is traditional for inner layers but would be less for fine-line etching. One ounce is normal for outer layers but they start with a half-ounce and plate up.

As the fab-shop adds the plating to the outer layers, they’re also plating the surface of the holes. They do this plate-up prior to etching away the circuit pattern for the outer layers. This is why the outer layers will have a greater minimum trace width and air-gap than the inner layers. Vias are a vital part of PCB construction and will be covered in another chapter. They are introduced here so we can move on to multi-layer boards.

What about PC Boards With Multi-Layer Stack-ups?

A two-layer board will have a circuit pattern etched into both sides. This makes it easier to deal with crossed signals. It is also the starting point of what we normally consider for fabrication using vias and larger plated through holes to mount components.

With careful placement and routing, it is possible to support areas of controlled impedance. In this case, the secondary side of the PCB is mostly a ground plane with a few short traces or localized power planes mixed in. The idea is to keep a ground plane under any high-speed or high frequency lines. 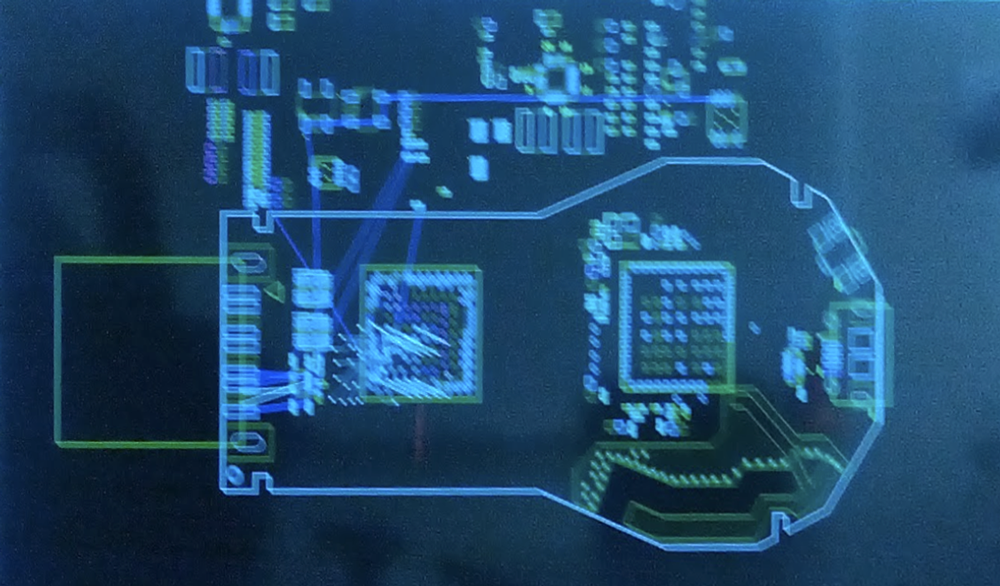 Figure 2. Image Credit: Author - An early version of Chromecast where my job was to reduce the layer count from eight to six. It was a complete do-over but the product sales warranted the investment.

When density increases, the venerable four-layer board comes into play. A typical four-layer board will be 0.062 inches in thickness with a relatively thick core between layers 2 and 3. In many cases, layer-two is a full ground plane and layer-three is a power plane or a mixture of planes and signals. The reason to allocate some ground plane to layer-three is if there is any controlled impedance used on layer-four.

The main reason designers wind up using more than four layers has to do with circuit density. Some component packages will require more layers to successfully fan-out the chip. Some devices will require more layers for additional power domains, even redundant layers for the same voltage. Optimizing the layer-count starts with the device with the highest level of integration. Isolating noisy traces and protecting victim traces requires more layers to avoid cross-talk.

As I mentioned, the number of potential stack-ups is endless. The copper can be varied with additional thickness used on layers that carry high current. The hallmark of a good stack-up is balance. Starting from the central core dielectric layer, the layers should be a mirror image working from the center up and the center down.

All multi-layer rigid boards will thus have an even number of layers. There can be multiple cores in a PCB stack-up and each will have metal on both sides. When prepreg layers are added, they always go on both sides of the core in equal distribution with one layer of copper added per layer of prepreg. If the vendor tries to add one layer without the other side getting one, the stack-up will be unbalanced and prone to warpage. 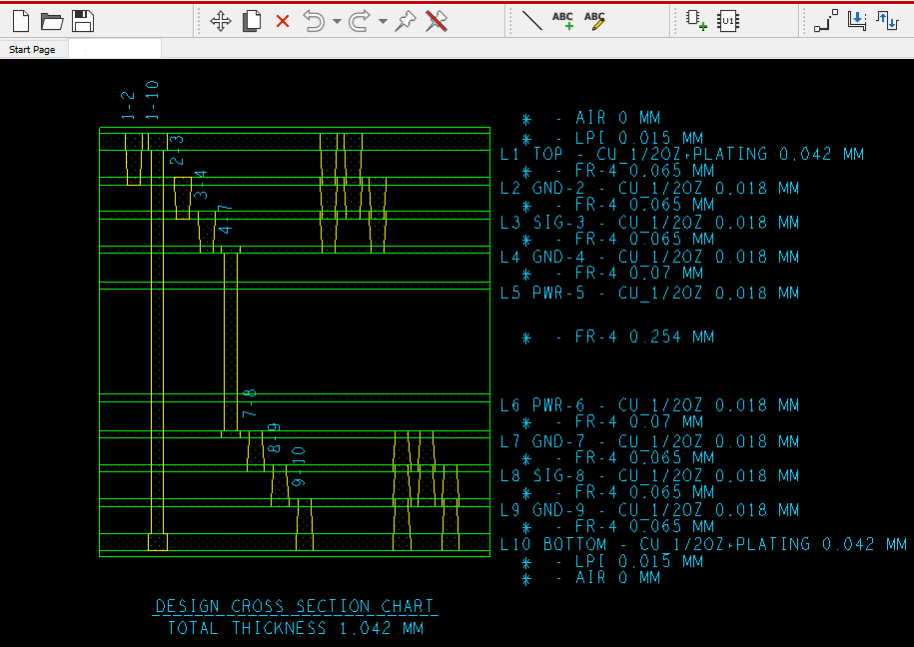 Figure 3. Image Credit: Author - This would be known as a 3-N-3 stack-up to denote three sequential lamination cycles and N number of layers for the initial lamination. In this case, N = 4. Lamination takes time and uses a press which is an expensive piece of equipment. A through-hole board uses one lamination cycle while an HDI board will use an additional cycle for each layer of micro-vias. It’s a layout advantage that comes at a cost.

Capturing all of that data can be tedious, especially if you wind up translating the data from one unit of measure to another. Beyond the stack-up, there is also the matter of line widths and air-gaps for controlled impedance requirements. One way to reduce potential errors is to ask your vendor to share the stack-up as IPC-2581 data. I don’t know about all ECAD tools but the ones I do know will import the data seamlessly. In any case, work with the vendor. Don’t try this at home!

Meanwhile, it is common for rigid-flex stack-up geometry to use from one to three layers of flexible material as the core. The rigid layers are built above and below the flex layers in equal measure. Three layers of flex material work out well as the flex circuit can have traces on the inner layer with a mesh of ground on the outer two layers. These three layers would protrude out from the rigid section with another rigid section added to the end of the protrusion. When flexibility is more important than EMI/EMC, a single layer of flex material is another possibility. We’ll explore flexible printed circuits in more detail later on.

(1) What does IPC mean? It used to stand for Institute of Printed Circuits but they’ve broadened their scope while retaining the initials. IPC is a trade group that sets and documents the industry standards. The relevant information on a given topic can be hard to find among the many publications. I will be referring to some of those documents while distilling the knowledge into a manageable form.

(2) We used to call the side with components the top side. Primary and secondary have replaced top and bottom. Primary refers to the side with the majority or all of the components. Secondary indicates fewer or no components. The Primary side isn’t always facing up in the product. The orientation is typically defined by the physical design team along with the board outline and interconnects.