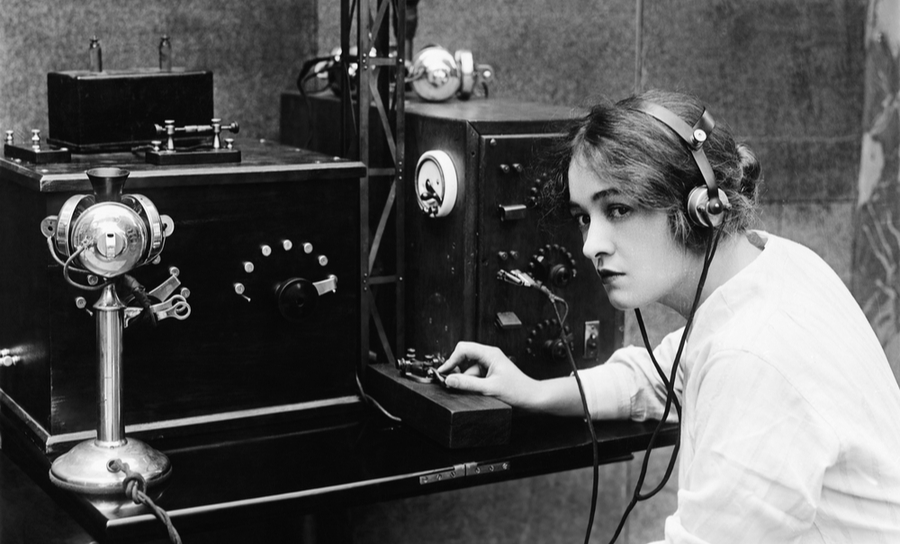 The RF guys must have it difficult with the alphabet soup of modulation techniques. ASK, OOK, PAM, QAM, FSK…, the list of amplitude, frequency, and phase modulation methods goes on. No matter which modulation technique you use to transmit data along a carrier signal, you’ll need to demodulate the received signal to retrieve analog or digital information.

Most folks are likely familiar with analog amplitude modulation (i.e., AM), where a low frequency analog signal forms an amplitude envelope that is superimposed over a high frequency carrier using a multiplier (mixer) or other modulator circuit. This is the standard method used in analog AM radio. The amplitude envelope can then be retrieved from the carrier using an envelope detector. This consists of peak detection with smoothing. You can also lock a local oscillator to the received carrier with a PLL, mix the received signal with the local oscillator, and pass the multiplied signal through a low pass filter. The output from the low pass filter is your amplitude envelope. Both methods are simple enough to simulate in the time domain.

As was mentioned above, analog amplitude demodulation is simple enough as it uses an envelope circuit. Digital demodulation can become complicated as you need to extract a discrete signal level from the carrier, and the extracted digital signal in amplitude demodulation has wide bandwidth. This makes filtering difficult when working at low levels with high noise floor as you risk recovering a distorted version of the signal. This often must be done in the presence of jitter superimposed at the receiver. Once you are working with MLS channels, you have to confront intersymbol interference (ISI), and the demodulated digital data must be distinguished with an equalization scheme to reconstruct the transmitted digital data.

With ASK, NRZ, and OOK, the signal has a well-defined envelope, even if the transmitted signal was constructed using bandlimited digital data (this is standard practice). The data rate is normally equal to the carrier frequency divided by some integer, meaning changes in the envelope correspond to complete periods of the carrier signal. This is shown in the above image. You can use peak detection in an envelope circuit to extract the digital data, which will reproduce the band-limited version of the transmitted data. This requires some subsequent amplification and clipping to retrieve clean digital signals. 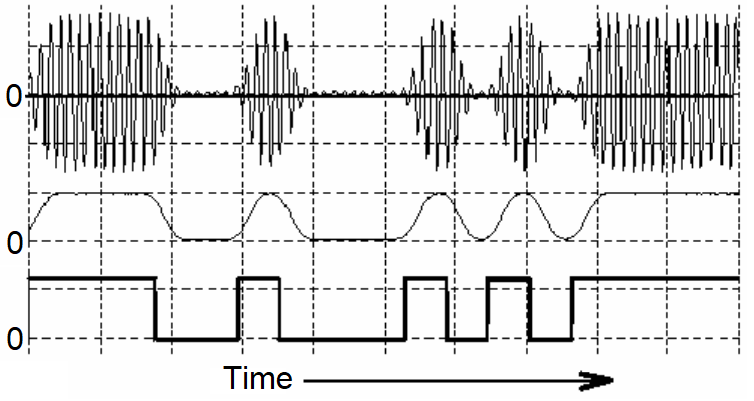 Note that PAM and QAM also have well-defined bandlimited envelopes, but the residual ripple produced by a peak detector envelope circuit can become a major problem that increases ISI when signal levels in the received signal are closely spaced. The natural choice would be to amplify the signal, but the amplifier will generate a large number of intermodulation products when amplifying digital amplitude-modulated signals, which can also increase ISI. This also requires an extremely broad bandwidth amplifier with a large linear range and high 3OIP intercept point. If you can afford these specialized components, then you can use peak detection for amplitude demodulation as long as you apply subsequent equalization.

The alternative with multilevel signalling is to lock a reference frequency and the carrier with a PLL, remove the carrier by mixing the received signal with the reference, and pass the mixed signal through a low pass filter. This will reproduce the multilevel bandlimited data that was originally transmitted. You’ll still need to use equalization and Grey code to recover the original bit stream as serial data, but this avoids the problem of ISI due to ripple in a peak detector. This means that this scheme is better for higher data rates as there will be less ISI in the demodulated signal.

We’ve shown two options for LMS with different bit depths, but each method will need to be optimized for particular symbol rates and carrier frequencies. Regardless of bit depth, ripple leads to greater ambiguity in the signal level as the symbol rate becomes similar to the carrier frequency. At lower symbol rate, you’ll need to determine which of these options is best for your bit depth. As much as we would like, there is no rule regarding which method to use for different conditions, and designers will need to carefully model their interconnects during the schematic and layout phases to determine which is best.

No matter which amplitude demodulation circuit or IC you want to use, you can create your schematics and layout, and analyze the behavior of your system, when you use the right PCB design and analysis software. Allegro PCB Designer can help you create and simulate your next system and examine potential signal integrity problems during amplitude demodulation with a full suite of analysis tools.