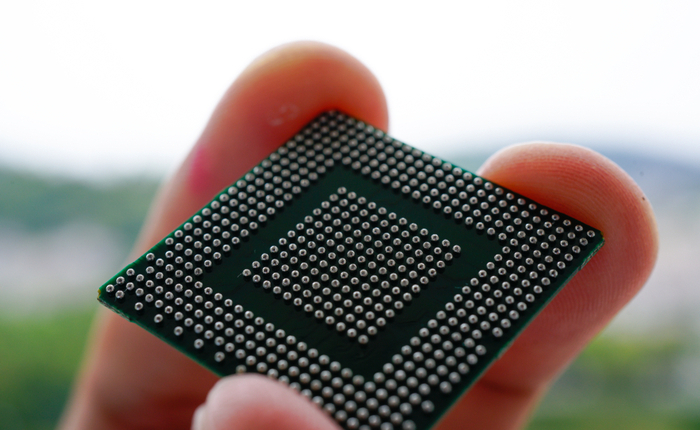 For a long time now, the Peanut Butter Cup has been one of the most popular snacks that you can purchase. Originally marketed as “Two great tastes that taste great together,” the candy makers realized that you can have more success with a combination of ideas than those ideas would have on their own. A few other great examples are chocolate sauce on ice cream, multiple blades in a Swiss army knife, and putting vias in surface-mount pads on printed circuit boards.

Although using vias in the pads of a circuit board is very convenient for the designer, there are also many other advantages to this process. At the same time, there are some concerns you should be aware of as well. Let’s take a further look at what via-in-pad (VIP) design is and how it can help you when laying out your printed circuit boards.

A Refresher Course on Vias in PCB Design

Let’s first start with a look at the different types of vias:

There is a cost to using vias, however, that designers need to be aware of. Just as a trace on a circuit board creates inductance, so do vias, and they can impact the signal integrity of high-frequency nets. Therefore, there are many considerations for how you use vias in your PCB design. And yet, vias are essential to successfully routing a board. As component pin-counts continue to rise, finding ways to route all of the nets that connect to these devices becomes increasingly difficult, which is where via-in-pad technology can be a real help.

What You Need to Know About Via-in-Pad Design

Via-in-pad design is the practice of putting a via into the metal pad of a surface-mount component footprint. There are many advantages to using VIP design, and here are a few of them:

The trade-off of using VIP design is that it involves more time and expense when the board is being manufactured. For traditional via escape routing, the circuit board’s solder mask will cover or “tent” the vias. This prevents solder from wicking down through the via holes during assembly. In VIP design, however, this isn’t an option because it would prevent the parts from being soldered to the board. To get around this, the VIPs must be covered, or “capped,” requiring an additional step in the manufacturing process.

The caps used for VIPs must be a material that can be soldered to since it is part of the pad that the component will be attached to. The caps, however, pose another problem as trapped air within the via holes can outgas during assembly. With the vias in the pads, any outgassing can potentially break the solder joint that is being formed during the assembly process. To prevent this, the via holes must first be plugged. Usually, an epoxy compound is used for this, which adds yet another step to the manufacturing process of the board.

Vias in pads can be created by either drilling them mechanically or with a laser. The type of via you choose to use will depend on the design needs of the board, the capabilities of your manufacturer, and the price you want to pay:

As you can see, via-in-pad technology can be very beneficial to your design. The next step is setting up VIPs in your PCB design tools. 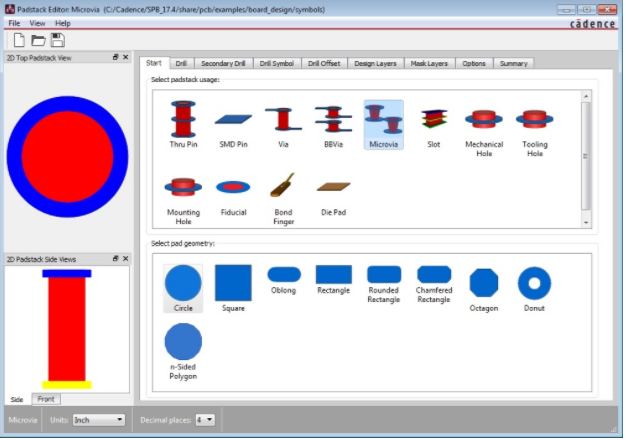 Using Padstack Editor, by Cadence, to create a microvia for a PCB design

How to Create Precision Via-In-Pads in Your PCB Design

You can probably force most PCB design systems to put a via into a pad, but you may end up dealing with a lot of design rule checking errors if the system isn’t already set up for this technology. When using a software system that is designed to support this type of technology, you first need to create the via you need, as you can see in the picture above where a microvia is being created using a padstack editor. Next, you need to set up the rules for the VIP within the system so that it accepts the vias where you place them.

To efficiently design modern PCBs, you need a PCB design system that gives you the ability to create multiple via shapes and structures and that also has the rule editing capabilities to set up your design for via-in-pads.

Allegro PCB Designer is the design system that you need for this type of work. With its advanced via padstack creation tools, as well as its fully-featured design rules and constraint editor, you can set up any technology you need when designing your next printed circuit board.