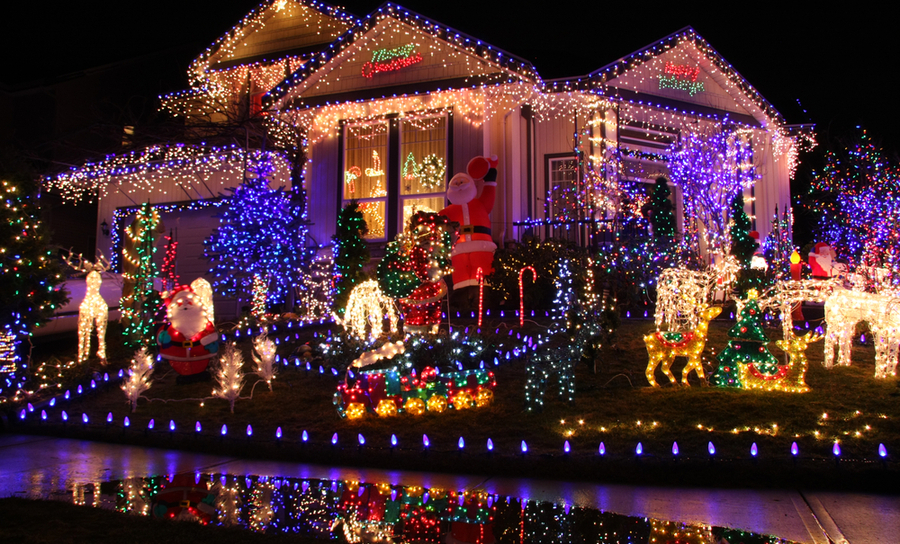 The goal of technology is to either simplify your work, or make it possible to accomplish more. If you can do both then you’re really in the sweet spot. For years during the holiday season I would run around the house plugging in all the Christmas lights at dusk, and then pulling those plugs out before going to bed. Eventually I upgraded to plug-in timers, and now I use smart plugs which are automatically scheduled or controlled with a voice command. The task of turning the lights on and off has gotten easier, and I’ve added more lights to the annoyance of my wife.

In PCB design we are also constantly on the lookout for new technological improvements to simplify our work, and accomplish more as designs become smaller and more dense. One of those improvements is the microvia. These laser drilled vias are smaller than regular vias and have different aspect ratios. With their smaller size they simplify the task of routing traces allowing us to pack more routing in tighter spaces. Here is some more information on microvia aspect ratios, and how using microvias can help with your PCB Design.

First of all, let’s go over some basic information on vias and how they are used in printed circuit boards. Vias are holes drilled through the PCB that are plated to conduct electrical signals from one layer to another. Just as traces conduct signals horizontally in a PCB, vias conduct those signals vertically. Vias can range in size from small to large, with the larger vias being used for power and ground nets, or even to attach mechanical features to the board. Standard vias are created by mechanically drilling them, and fall under three categories:

Microvias on the other hand differ from standard vias in that they are drilled with a laser, which allows them to be smaller than a regularly drilled hole. Where a mechanically drilled hole is usually no smaller than 0.006 inches (0.15 mm) depending on the board width, microvias start at that size and get smaller. Another difference with microvias is that they usually only span two layers, as plating the copper inside these small holes can be difficult for fabricators. If a direct connection needs to be made through more than two layers, the microvias can be stacked on top of each other.

Microvias that start on a surface layer are not required to be filled, but buried microvias will be filled with different materials depending on the application. Stacked microvias are usually filled with electroplated copper for connectivity between the stacked vias. Another method of connecting microvias through the layer stack is to stagger them and connect them with short traces. As you can see in the image below, a microvia has a different profile than a regular via resulting in a different aspect ratio. 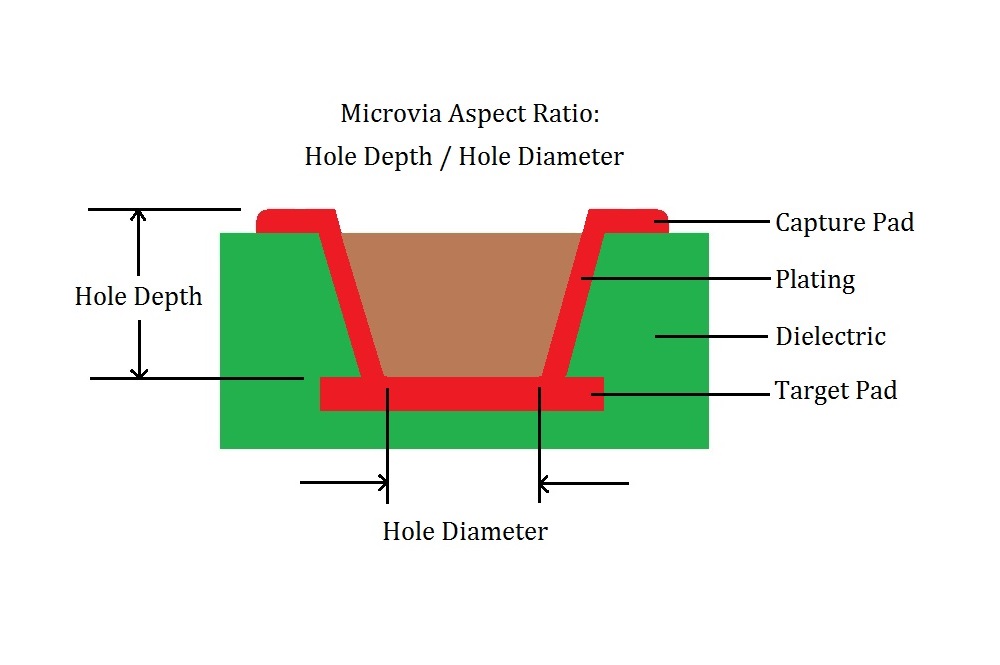 A diagram of a microvia

What is the Microvia Aspect Ratio, and Why is it Important to PCB Design?

The aspect ratio of a via is the ratio between the depth of the hole and the diameter of the hole (hole depth to hole diameter). For instance, the aspect ratio for a standard circuit board at 0.062 inches thick with 0.020 inch thru-hole in it, would be 3 to 1. This ratio is used as a guide to make sure that the fabricator doesn’t exceed the capabilities of their equipment when drilling the holes. For standard drilled holes, aspect ratios usually shouldn’t exceed 10:1, which would allow for a 0.062 inch board to have a 0.006 inch (0.15 mm) via drilled in it.

With a microvia, the aspect ratio is much different due to its size and depth. Plating smaller holes can be difficult, and trying to plate a small hole going through 10 layers of a circuit board can cause a lot of problems for a PCB fabricator. If the hole only spans two of those layers however, then the plating becomes much easier. IPC used to define a microvia based on its size, which was equal to or smaller than 0.006 inch (0.15 mm). Over time though that size became common, and IPC decided to change its definition to avoid having to continually update its specifications as technology changed. Now IPC defines a microvia as being a hole that has a 1:1 aspect ratio as long as the hole doesn’t exceed a depth of 0.010 inches or 0.25 mm. 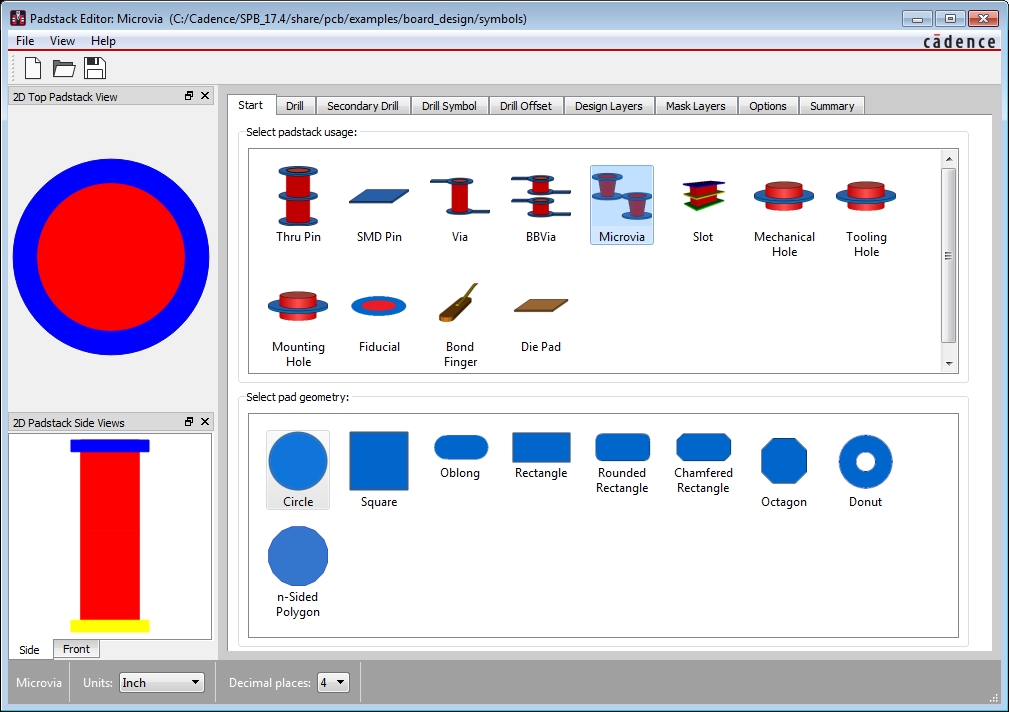 With the Cadence Padstack Editor, creating microvias in OrCAD is simple

The name of the game in PCB design is to get more trace routing into smaller areas as PCB technology increases its density. This has led to the use of blind and buried vias as well as embedding vias in surface mount pads. However, blind and buried vias are more difficult to fabricate because of the extra drilling steps involved, and the drilling can leave material in the holes resulting in manufacturing defects. Regular vias are also usually too large to be embedded in the smaller surface mount pads in today’s high density devices. The microvia however can help with all of these problems:

Microvias are an advanced method of PCB fabrication, and if your board doesn’t have the need for them you will obviously want to stay with standard vias to reduce cost. But if your design is dense and you need the extra room, take a look whether or not using microvias could help. As always, it is a good idea to check with your contract manufacturer first on their capabilities before you design a PCB with microvias in it.

Precision Use of Microvias Depends on Your PCB Design Tools

Once you are set up with your manufacturer, your next step will be to configure your PCB design tools for working with microvias. There’s a lot that you will need to do in the tools to efficiently work with the details of microvia design. This will include new via shapes as well as the design rules that go along with them. Microvias can be stacked, which you wouldn’t normally do with regular vias, so your tools need to be able to contend with that as well.

Fortunately the PCB design tools that you need for working with microvias are already available from Cadence. Among their different schematic, library, simulators, and design tools is Allegro, which will give you the power and control you need for microvia design.