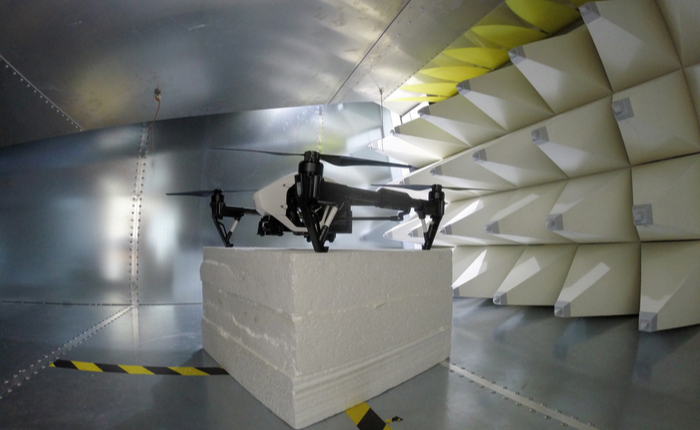 EMC testing for a drone in an anechoic chamber.

Any product you create for operation in an electrically noisy environment will need to pass stringent EMC tests under the International Special Committee on Radio Interference (CISPR) standards. An “electrically noisy” environment encompasses just about any possible environment, whether it’s in a consumer’s home or in military aircraft. EMC tests and EMI suppression (both radiated and transmitted) are linked to your PCB layout, but there are some basic circuit design choices that can help ensure your next product will pass EMC tests.

Any circuit simulation will be phenomenological and will not show you the true electrical behavior of a PCB layout. Although the results you receive are approximate, they give you enough detail to pinpoint specific circuits that may be susceptible to receiving broadband noise from external EMI sources. If you can find these circuit blocks and modify them early, you’re more likely to pass EMC tests. Here’s how you can create a SPICE EMC simulation for your system and how you can model EMI susceptibility.

The goal of any SPICE EMC simulation is to replicate the EMI testing process for any radiated EMI the device might receive from an external source. Similarly, a SPICE EMC simulation can be used to identify EMI sources within the board under test, which can then be corrected early with a variety of methods. This requires modeling EMI received from external sources and the electromagnetic field that might be admitted from within the board under test.

Any board has multiple sources of EMI, ranging from switching components in a power regulator to broadband noise from analog components, as well as harmonics from noisy clocks. These same sources of radiated EMI might cause your board under test to receive excessive noise. The goal in a SPICE EMC simulation is to examine  the following aspects of your board’s functionality:

When you have schematics with different sets of circuit blocks, it can be difficult to pinpoint exactly how these circuits will be susceptible to EMI. Reception of EMI depends partially on your PCB layout and on the components that make up your circuits, but these elements also determine how your system will respond to EMI in the event it does couple strongly into your board.

CISPR standards on EMC are defined in terms of the electromagnetic energy radiated by an aggressor device across a range of frequencies. The goal in your design is to reduce EMI emitted by the device, which will protect external devices and circuit blocks within your own board from receiving EMI and malfunctioning.

For a SPICE EMC simulation, you can’t simulate emitted radiation directly. However, you can simulate how different circuit blocks produce current that will be a source of radiation emission. Any portion of a design containing a strong oscillating current will emit radiation into the surroundings. Transient currents in a switching MOSFET, transmission line, or power line need to be examined as these will emit strong electromagnetic radiation. When strong currents are identified in a transient simulation, you can apply isolation near these nets in your PCB layout.

A transient simulation is a fundamental time-dependent EMC simulation.

Modeling Received EMI in Your PCB

When EMI is received, it creates a disturbance in a circuit that can be modeled as a voltage/current source in your system. The source you need to use depends on the type of EMI received by the system.

A continuous source of EMI includes everything from harmonic sources to modulated sources. A modulated source will be broadband and will induce a complex time-dependent response. A transient analysis is also useful here as it shows you how the circuit responds to the temporal variation in the external EMI source. Here, you’re not worried about how the EMI source couples a signal into a circuit; this will depend in part on your PCB layout. Instead, you want to see how the circuit responds to both narrowband and broadband EMI.

As an example, consider an analog circuit running at 1 MHz (5 V amplitude) that receives a 1.2 MHz FM signal as EMI from an external source. In the example shown below, the received EMI signal has a 1.2 MHz carrier frequency, 200 kHz modulation frequency, and modulation index of 4.

The transient analysis results shown below illustrate the sensitivity of analog circuits—the 1 MHz signal initially shows a slight transient response with peak amplitude reaching up to 8 V. Modulation from the received FM signal is also seen overlaid on the voltage seen at the load. There is clear interference in this example, which will propagate into the load component.

Transient analysis results for an analog circuit running at 1 MHz. The modulation from the 1.2 MHz FM EMI signal appears superimposed on top of the desired 1 MHz signal.

Once you gather your transient analysis results, you can see how different frequency components in the received signal propagate through the circuit using a Fourier transform. The results below show the Fourier spectrum for the EMI signal received from an FM source. The circuit is designed to run at 1 MHz, as can be seen in the central peak in the graph. The voltage at the load in the time domain is transformed into the frequency domain to yield the graph below.

Fourier spectrum for a circuit running at 1 MHz, where the circuit receives a 1.2 MHz FM EMI signal.

This simple example should illustrate the importance of filtration with EMI filter circuits, particularly for analog circuits. These filter circuits can be designed from discrete components and included in your PCB layout. A more elegant and lower cost solution is to use grounded vias as shielding. Carefully planning your board layout will also help suppress EMI by taking advantage of ground planes in your layer stackup.

Obviously, a phenomenon like a lightning strike can be simulated directly in your circuit simulations. However, you can model the voltage induced in a circuit and evaluate whether your overvoltage protection circuit will produce low current as seen by a load. Any load component that has a low current rating and is at risk for failure should be protected with some voltage suppression circuit.

Using a pulsed source with high peak voltage in your schematic will simulate a strong ESD event in your system. The pulsed source can be placed anywhere in the circuit to simulate the location of the discharge event. You can then use a DC sweep or transient analysis up to kV levels and measure the current across different components to simulate the current induced in the load. A parametric transient analysis is very useful here as it shows you how the ESD event decays over time.

The image below shows a result from a transient SPICE EMC simulation where a TVS diode and capacitor are used to protect a resistive load from a TVS diode. The voltage of the simulated ESD event is 1.5 kV, but the TVS diode and the capacitor bring the magnitude of this pulse down to ~250 V.

For further analysis, the amplitude of the ESD event could be swept in a parametric sweep to show how the transient response changes at the load. The power in the load could also be compared with its power rating to determine whether this type of event will cause the load to fail. This is shown in the graph below. Because SPICE simulations calculate the voltage and current at each node, the power in the load component can be easily calculated and placed in a plot. From this graph, we see that the power dissipated in the load is ~5 kW, which is enough to destroy most components.

SPICE EMC simulation results showing the power dissipated in a load component during an ESD event.

Once you’ve qualified your circuits and you’re ready to examine your PCB layout, you’ll need to use a 3D field solver to simulate how radiation is emitted from your device during operation. This is one step that should be taken before EMC certification testing to ensure your layout does not produce concentrated radiation around the board. A multiphysics solver or a full-wave EM solver will build a model directly from your layout and will calculate the electromagnetic field emitted from your board while in operation.

The full suite of PCB design and analysis features and front-end design features from Cadence give you the tools you need for SPICE EMC simulations for your circuits. PSpice Simulator includes the tools you need to create schematics and run multiple analyses for your circuits, allowing you to identify susceptibility to different EMI sources. You can then use OrCAD PCB Designer to create your PCB and perform post-layout simulations.