Traces in a PCB design against the ground reference plane

In our day to day interactions with people, we all know that a good reference is essentially putting in a recommendation for someone else. There are social media platforms where you can leave a reference for how well the plumber you hired did their work, or who has the best sushi in town. In some cases, giving a reference can even result in you getting a bonus or reduced price by grateful service providers. By paying it forward, you can get a good return on your reference, which is not unlike a ground return path on your PCB design.

The signals that we so carefully route traces for in our designs have to return to their source. To accomplish this, they need a well-designed reference plane for a good return path. This is a critical stage in the overall design of the circuit board, however, and if care isn’t taken in designing the return path, the performance of the board may suffer. We’re going to examine how the return path in a PCB works, and some tips for successfully creating reference planes in your design. Ground Plane or Return Path, What is a Reference Plane?

Although it is common to refer to the traces of a printed circuit board as conducting the signal, the truth is that the trace works in tandem with the signal's return path to conduct voltage and current. These two paired conductors create the electrical and magnetic fields of the signal which travels through the space between the conductors, which is the dielectric layer separating the trace and the return path. As it has been said; just as people travel through hallways and not the walls which define the hallways, so does the energy of a signal, which travels through the spaces between the traces and not the traces themselves.

A signal will use the closest and easiest route that it can find on its own frequency for a return path. In a printed circuit board, this can end up being wires, shields, traces, or metal planes. Whatever the lowest impedance route that the signal can find, that is what it will use as a return path. Back when circuit boards were operating at slower signal speeds, the return signal was able to wander around more in order to find a path on its way back. As the signal speeds in circuit boards increased, however, it became more and more important to provide a clear return path so that the signal would have an uninterrupted loop for the current to move in.

The most ideal return path for a signal in a circuit board is a large area of metal, or a plane layer, which becomes the reference plane. Usually, this will be a ground plane, and it needs to be on an adjoining layer to the signal trace with a layer of dielectric between them. With a clearly defined trace and reference plane, the energy of a signal will be contained and won’t go beyond the plane to the next layer in the board stackup. This helps to prevent the energy of the signal from interfering with other signals in the area. But if the pairing of traces and reference planes is not done correctly, it can create the potential for problems in the performance of the PCB. 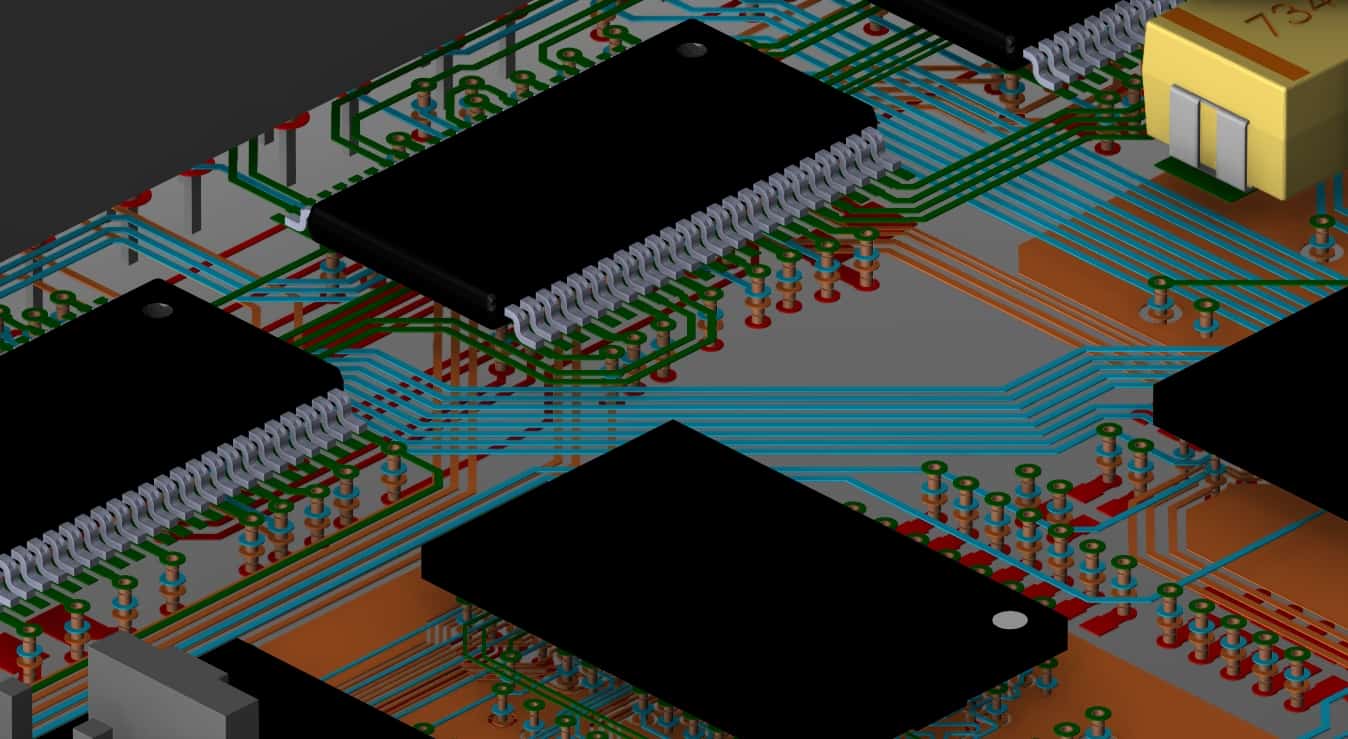 Problems That Can Happen Without a Good Reference Plane

As we mentioned above, the slower signal speeds of older circuits didn’t require as much from their return paths as today’s high-speed circuits do. A power distribution network (PDN) on those slower boards were often designed more for the convenience of the designer than for the clear return of signals. In today’s high-speed circuits though, the lack of good signal return paths could result in a lot of noise in the circuit board. This noise can disrupt the correct operation of a circuit by creating false signaling. The lack of a direct return path will also introduce impedance in that path and create a voltage drop on the ground plane leading to ground bounce.

Signal returns will couple to whatever they can find, and if a good reference plane isn’t available, then that energy may even couple with other traces. This is known as common mode energy, and it can create antennas where not expected and potentially generate additional noise. The reference plane is also intended to contain the signal energy fields that are generated around a trace. If there isn’t a sufficient reference plane close by for the signal on a trace, then those energy fields could extend into the rest of the board or out onto other devices.

As you can see, the correct design of a reference plane for clear signal paths is very important. Here are some ideas on how to do that.

To design a printed circuit board with good signal integrity requires a lot of engineering decisions starting with the materials and configuration of the circuit board layers. We won’t look at all of those details, but instead focus on some of the basics of good PCB design for an effective reference plane:

Keep routed signals on one layer as much as possible:

Successful transmission line routing depends on the traces being coupled with a reference plane for a good signal return. The best way to do this is to keep the trace routing on one layer, with a reference plane immediately adjacent to it. This isn’t very practical in the real world of PCB design though, and you will usually need to change layers to get all of your routing in. When you do change layers, try to go to the next layer adjacent to the same plane. This way your return path can continue uninterrupted on the same reference plane. If you do have to transition the trace further in the layer stackup however, you should use a ground transfer via.

You can see this illustrated in the diagram above. The red lines show the signal direction in the traces, while the blue lines show the return path on a plane. On the left side you can see where the trace extends down with a via through multiple layers, and a transfer via is used to connect the two ground planes together to give the return path an uninterrupted flow. On the right side the trace vias through to the next signal layer which allows the adjacent plane to serve as an uninterrupted return path for both signal layers.

Don’t route a transmission line across a split plane:

Splitting a ground plane that is being used as a reference plane will cut off the return path for any signals that are going through this area. This has the potential for creating a lot of noise in your board as the signals have to find other paths to return on. Those signal returns may jump over to other signal traces and create a lot of common mode energy on those lines. The best thing that you can do is to not split a ground plane.

However, if you do have to split a ground plane, make sure that you do NOT route over the split. In many cases two ground planes split apart will still need to be joined together at one point. It is over this spot that you should try to route any signals that need to cross over the split. Plane layers that have both power and ground split on them will offer very little in the way of an effective signal return. Another potential problem are slots, cut-outs, or clustered vias that could put a barrier in the reference plane to the return paths. In the picture below you can see how the line of vias in the ground plane has effectively blocked that area for clear return paths. 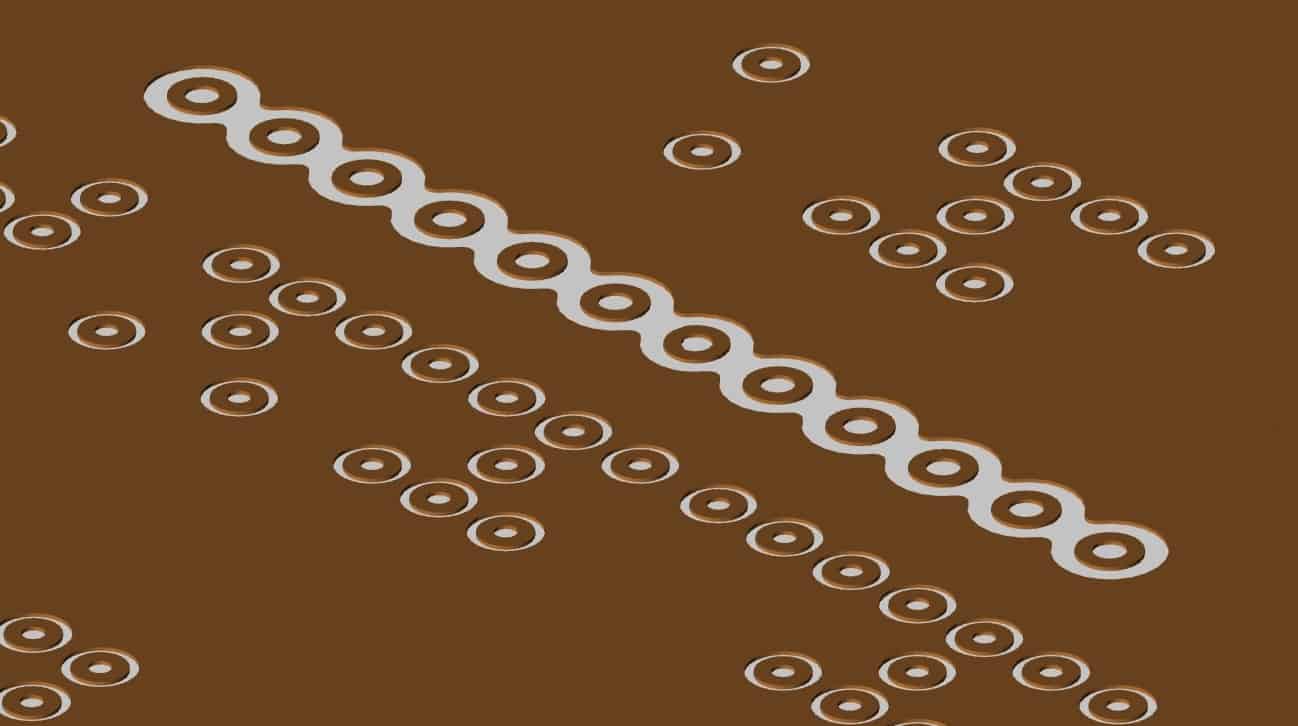 These parts can affect each other with the noise that they create, and they should be separated and not share the same reference plane for their signal returns. It is a good practice to use isolated planes for the different areas of circuitry when possible.

Although some high-speed traces do need to have length added to them for timing reasons, it is best to generally keep the traces as short as possible. This provides the most direct path for the signal and gives you the best chance of a clear return path. The shorter the trace is, the less time there is for problems to build up in it.

In order to keep up with all of these rules, plus the other requirements that go along with high-speed design, you need the capabilities of advanced PCB design CAD tools. Next, we’ll look at some ways that tools like Cadence’s Allegro PCB Designer can help. 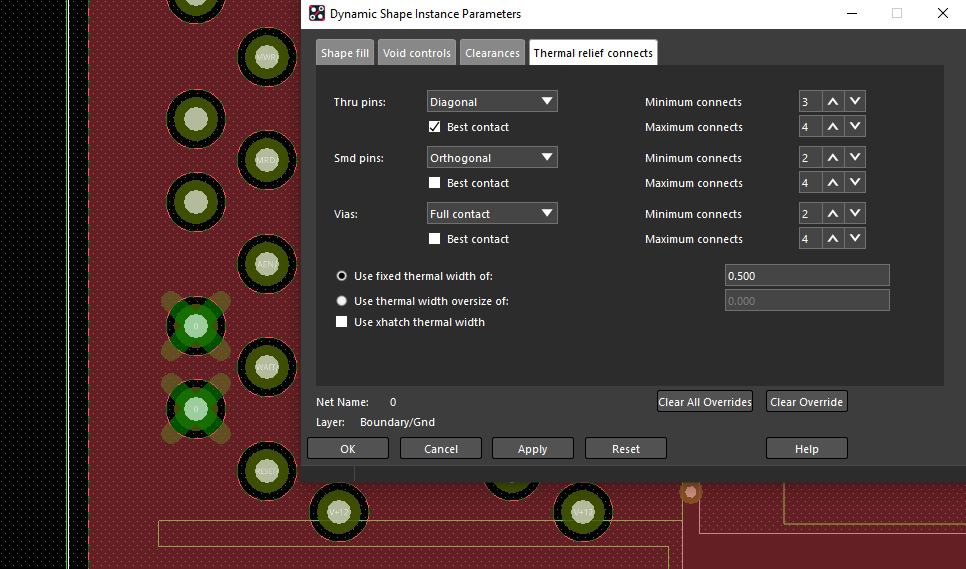 How Your PCB Design Tools Can Help with Plane Creation

The key to creating an effective reference plane is to work with PCB design CAD tools that give you complete control over the graphics in your design. With Cadence Allegro PCB Designer, you have control over all aspects of the plane shapes as you can see in the picture of the Dynamic Shape Instance Parameters menu shown above. You can use these features to configure your plane connections as well as how the plane will be filled and structured. This way you can create your reference planes according to the needs of the design the first time around.

Allegro also has a constraint management system that allows you to set up and manage all of your high-speed design rules and constraints in one application. Not only can you use this feature to configure regular trace width and spacing rules, but also trace length and topographies for high-speed lines and many other constraints as well. The constraint manager works between both the schematic and the layout allowing design engineers to work with high-speed rules as they design the circuits. This along with Allegro’s other capabilities will help you to be more productive in the design of your next PCB project.

For more information on how to work with and design high-speed transmission lines, please reference this E-book.