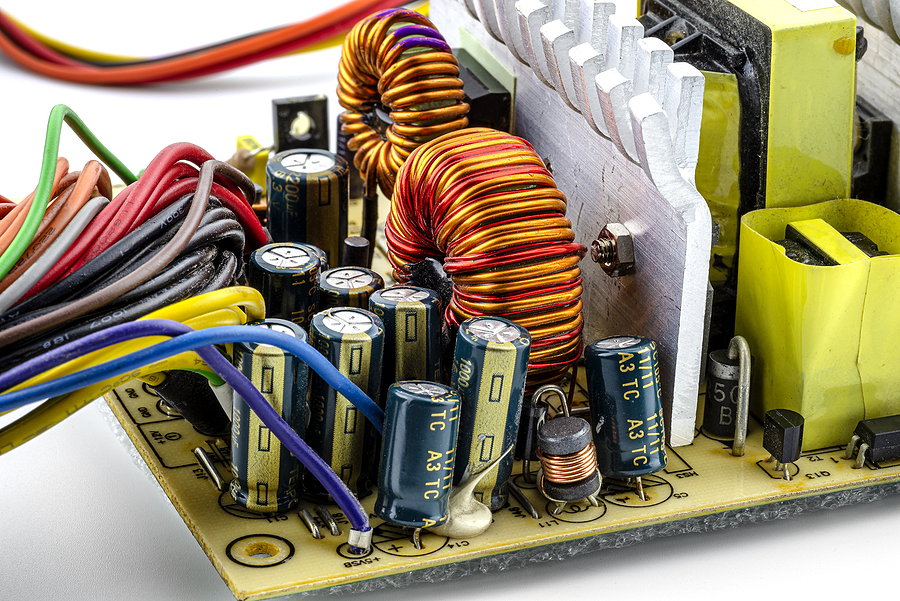 In this article, we’ll look at how the discontinuous conduction mode can arise and how component values + parasitics can play a role.

What Are DC/DC Converter Conduction Modes?

Most designs you’ll find online from semiconductor vendors are intended to operate in the continuous conduction mode. The same ideas and switching behavior of inductor currents can be found in other power circuits, namely a PFC circuit.

The two other modes are not necessarily bad or undesirable. In fact, in discontinuous mode, you can have stable regulation at the required output voltage, and you will have lower switching losses because the switching FET will be off for some period. However, because of the discontinuous current in the inductive section, there can be some additional noise compared to the continuous conduction mode case.

To keep a switching converter operating in the continuous conduction mode, you need to select components so that the inductance and capacitance in the output section are above some critical value. If these values are too small, the inductor current will quickly fall to zero. The diode or rectifier forward voltage must also be low enough to allow forward conduction during switching at the required inductor current, otherwise your diode will block conduction even when forward biased. 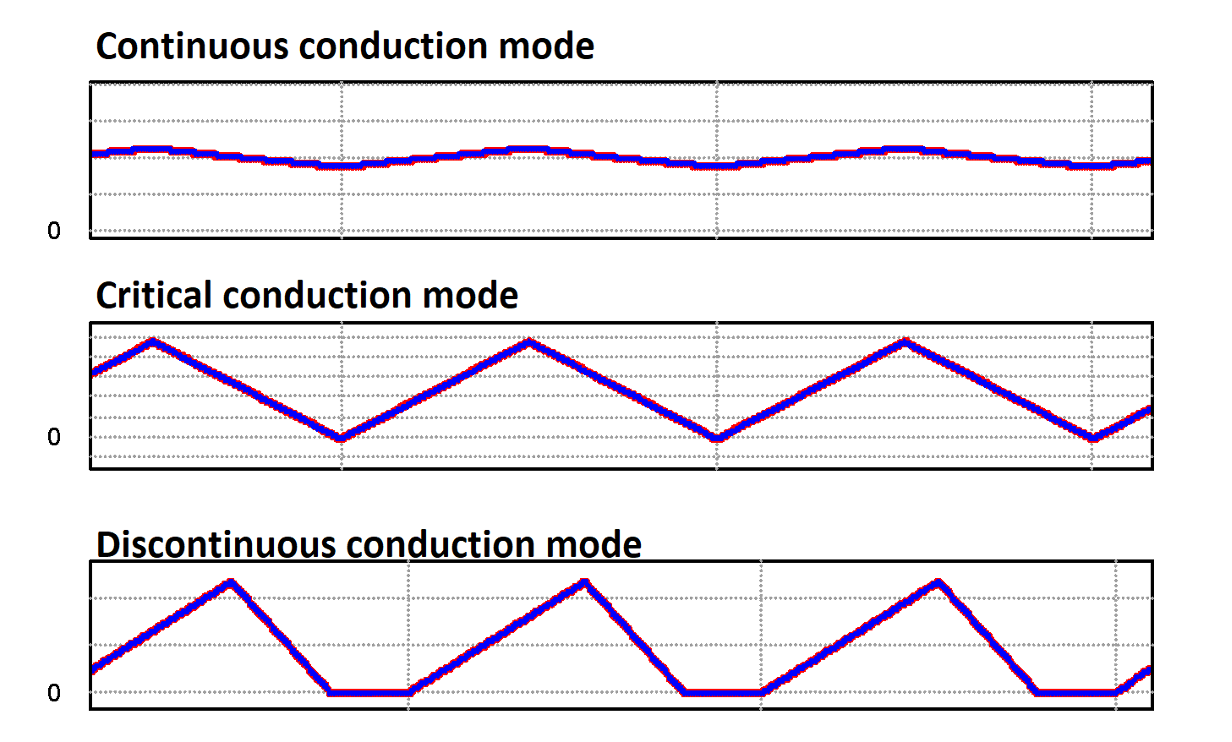 What can happen when we are not in continuous conduction mode? And how to parasitics play a role? Let’s look at an example.

This buck converter can operate in the discontinuous mode, and there will be component parasitics that influence the output voltage.

As we will see, this converter can operate in the discontinuous mode. The components selected above will also have parasitics that produce deviations from ideal behavior. In real converters, it is possible to observe oscillations due to ESL in the capacitors, parasitic inductance in the dI/dt loop, and the winding capacitance in the inductors. These components have self-resonant frequencies that correspond to an oscillation in the transient response.

Oscillations can be observed in the transient response in two instances:

If we just look at the case with a small inductor (3 uH) and low load of 10 Ω, we can see clear oscillation in the inductor current with 200 mA peak amplitude on the falling edge. The turn-on portion of the circuit is very severe, with huge overshoot reaching -17.6 A. In these conditions, the converter is operating in the discontinuous mode. 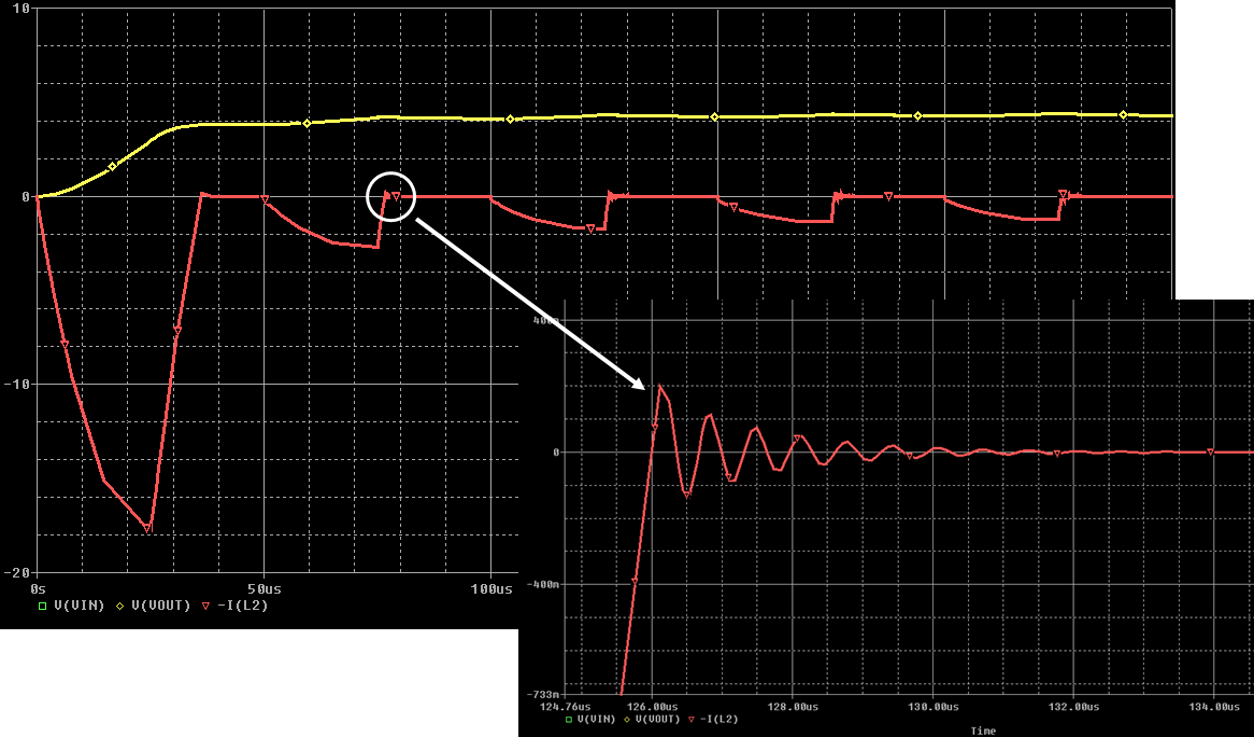 In discontinuous mode, there is an oscillation on the output due to the transient response in the LC section during switching.

In discontinuous mode, when the inductor current hits zero, the output can exhibit an underdamped oscillation. Just as is the case with output filtering, the simplest solution is to add some small amount of resistance (approximately 1 Ohm) on the output filtering capacitor. You can spot this behavior in a transient analysis simulation.

Now if we include parasitics in the simulation, we can see additional transient behavior. We can see both effects in the example below. When the winding capacitance (1 nF) and capacitor ESL value (10 nH) are included in the simulation, there are additional underdamped oscillations on the output voltage and the inductor current. The parasitic inductance in the capacitor accounts for two contributions: trace inductance, which is typically 5-10 nH/inch, as well as the ESL value, which is typically ~1 nH when vias and pads are considered. 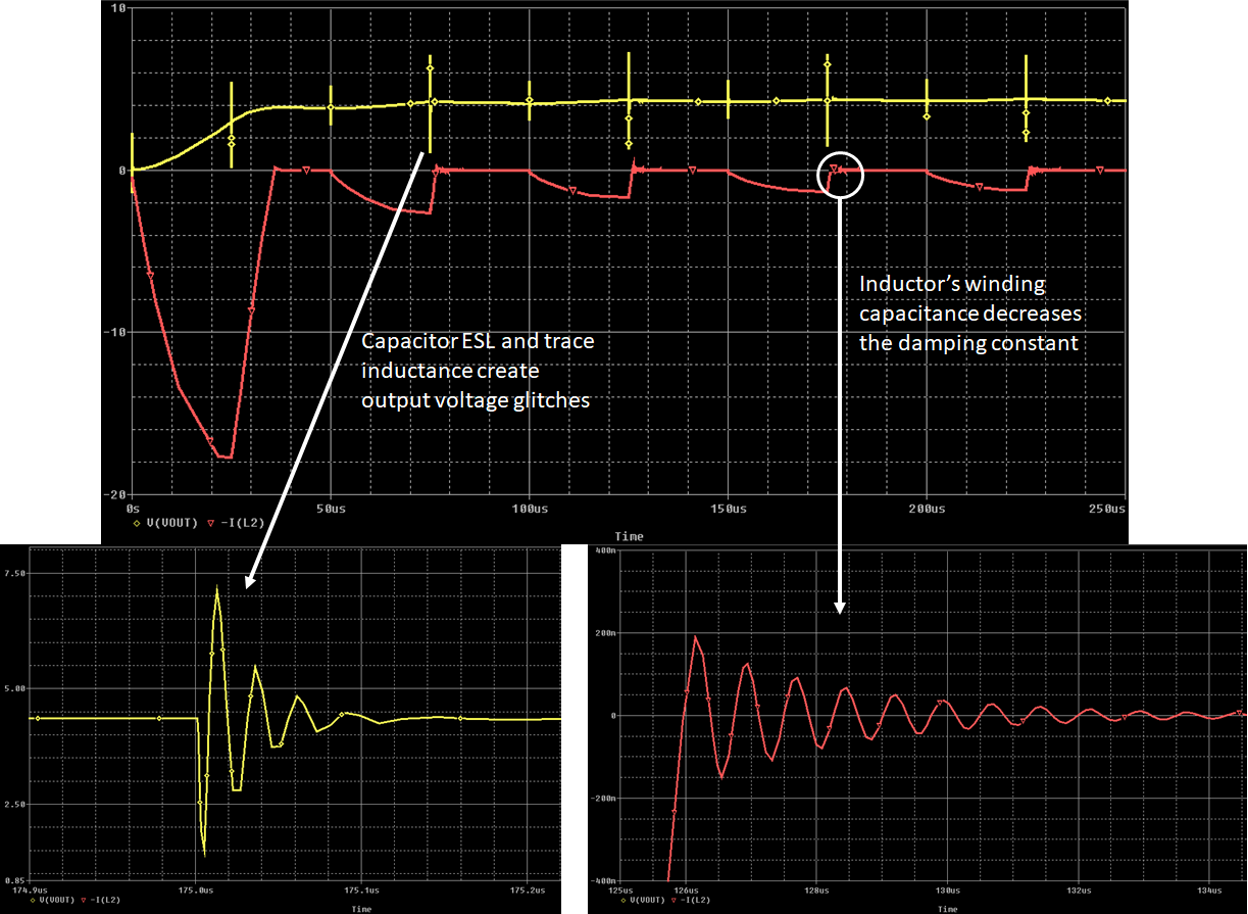 From these examples, we have an important conclusion: it’s critical to understand the parasitics in the circuit as these can cause the design to operate in an undesirable mode (discontinuous conduction) and with excessive oscillatory behavior on the output during switching.

Switching regulators that go beyond the standard buck, boost, or buck-boost circuits with a single element or a half-bridge switching stage can have more complex formulas for the minimum component values. If you intend to operate in continuous conduction mode, these formulas are an appropriate place to start to get some idea of minimum component values, but you should still simulate your regulator with an idealized load. Parameter sweeps with the component values will help you determine when the converter is operating in continuous conduction mode.

Everything we’ve talked about so far has focused on switching regulators, but the same ideas apply in bridge circuits for motor control, where a PWM signal is being used to modulate the current sent to motor windings. The only difference is we do not use a capacitor to smooth the output to a nominal DC value, we simply allow the PWM signal to turn fully off and the current to periodically fall to zero. Oscillations in motor driver circuits arise for the same reasons as in switching regulators: it is due to parasitics exciting underdamped transients as discussed above. When designing these circuits, it’s important to use transient analysis simulations to spot these oscillations.

When you need to perform simulations for evaluating power electronics circuits, use the best simulation and modeling features found in PSpice, the industry’s best circuit design and simulation software from Cadence. PSpice users can access a powerful SPICE simulator as well as specialty design capabilities like model creation, graphing and analysis tools, and much more.