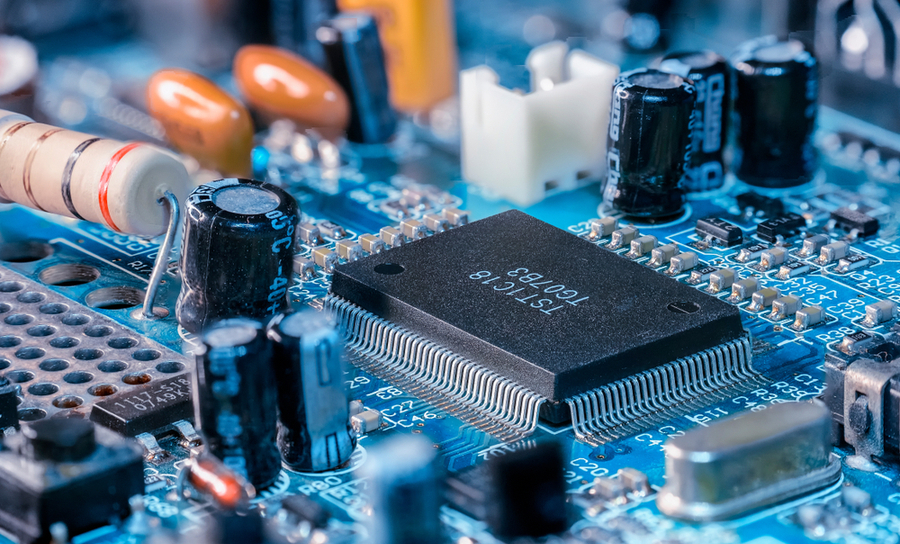 As more systems run at ever higher frequencies and switching speeds, capacitor design and selection have become even more important. The capacitor self-resonant frequency causes your capacitor to stop behaving like a real capacitor and start behaving more like an inductor at high frequency. This important effect is unnoticeable at low frequencies, but it becomes a major problem related to signal integrity, power integrity, and impedance matching at high frequencies.

The ideal model for a capacitor can be derived from Maxwell’s equations by defining a model with two infinitely large perfect conducting plates. A charge density is defined on one plate, with an equal and opposite charge density induced on the opposite plate. The two plates are separated by a dielectric with a known dielectric constant, and you can calculate the electric field between the two plates from Gauss’ Law. You can then easily calculate the potential difference that must exist between the two plates by integration. This allows you to define the simple equation Q=CV. You can also do this using the method of images.

For more complicated capacitors, such as circular-plate capacitors found in PCBs, you can still calculate an ideal capacitance value by hand using the method of images. Although these two principal methods can be used to determine the ideal capacitance, they completely ignore the behavior of a capacitor in a real circuit, including in a circuit board.

The value of C can be taken as the capacitance quoted in a component’s datasheet. The leakage resistance accounts for transient leakage that occurs in any capacitor after it has been charged and subsequently removed from its circuit. This value is usually large enough that it can be ignored in circuits that are driven continuously.

It is very important to note that the self-resonance frequency is not equal to the inverse square root of ESL*C, which is only true in the absence of damping. Although ESL and ESR both tend to be quite small, the damping constant in a real capacitor is equal to ESR/(2*ESL), meaning the damping can be appreciable, particularly in flat capacitors with larger area. This must be accounted for when performing simulations involving real capacitor models, and it determines how a capacitor responds to compensate ringing on a power bus.

As a real capacitor is actually a series RLC circuit, you can easily determine the capacitor self-resonant frequency using a SPICE model as long as you know the leakage resistance, ESR, and ESL. The capacitance value quoted in the datasheets can be used as C in the RLC network. Leakage resistance is usually large enough to be ignored in circuits that are actively driven, and it can safely be ignored when the capacitor is charged up to a high enough DC voltage. A capacitor self-resonant frequency can range from low MHz values to GHz values.

In measurements, you can easily determine the impedance spectrum of your particular capacitor using frequency sweeps and measuring the output with an oscilloscope. You can also easily do this with a vector network analyzer. You can then calculate the ESL and ESR values by measuring the transient damping rate and the resonant frequency of the capacitor in a simple test circuit.

Just as capacitors have a self-resonant frequency, inductors also have a self-resonant frequency. This means real inductors should also be modeled as their own RLC network. At a specific frequency, you will find that your inductor will have a peak in its impedance spectrum at a high frequency value, which depends on the parasitic capacitance, parasitic substrate conductance, and ESR in the equivalent inductor model.

As an example of how these factors affect signal integrity, consider the use of an undamped LC oscillator network for impedance matching in a high frequency analog circuit (e.g., a single-band antenna). You generally design the network it to have a specific impedance value at the LC oscillator’s resonance frequency (equal to the natural LC frequency), which is equal to the circuit element’s driving frequency. The real behavior of a capacitor and inductor can cause the LC oscillator’s actual resonance frequency to deviate from the ideal designed value. There may even be multiple resonance or antiresonance peaks in the network’s impedance spectrum. This also affects the bandwidth of the matching network.

As part of impedance matching with power circuits running at very high frequency in the nonlinear regime, and with other nonlinear circuits in general, you can determine the right impedance value you need using load-pull analysis at multiple frequencies spanning throughout the circuit’s bandwidth. This allows you to determine the proper impedance matching for a given input power value at multiple frequencies throughout the circuit’s bandwidth. For linear circuits, such as antennas and active circuits that run in the linear regime, you can use an AC frequency sweep to determine the impedance spectrum of the matching network without worrying about the input power.

Some designers may try to compensate the self-resonant frequency of a bypass or decoupling capacitor by placing two capacitors with different self-resonant frequencies in parallel. This is actually not recommended as you will unintentionally create a resonant oscillator that can radiate strongly at high frequencies and affect impedance matching in the circuit in question. This can also wreak havoc when if you do this to try and provide decoupling on a power rail, as it is possible to induce powerful ringing on a power bus when multiple circuits are driven simultaneously. Be sure to keep the capacitor self-resonant frequency in mind when selecting bypass/decoupling capacitors.

If you need to examine how the capacitor self-resonant frequency affects real circuits, the PCB design and analysis software from Cadence includes a number of simulations you can use to examine power and signal integrity in your designs. The SI/PI Analysis Integrated Solution for PCB Design package attributed with Allegro PCB Designer and Cadence’s full suite of analysis tools make it easy to perform important power and signal integrity simulations directly from your design data, offering a comprehensive view of the behavior of your circuits.