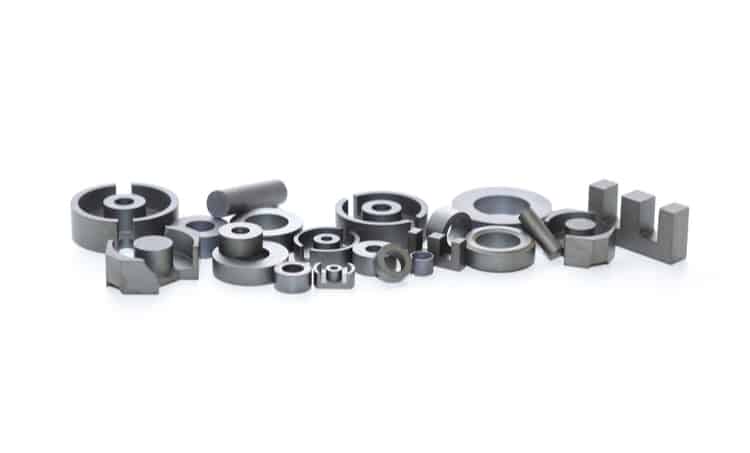 Ferrite cores are low-cost, simple, and easily fitted filters for your power cords

If you are looking for a low-cost, simple, and easily fitted filter for your power cord, consider ferrite cores. By inserting a ferrite core into a wire, you can achieve noise filtering of power cord signals. With ferrite core-based noise filtering in cables, you won't need any other circuit component, which will eliminate the need for a circuit redesign. And, fortunately, ferrite cores do not involve mechanical redesign either. With a simple ferrite core, you can improve the quality of the signal flowing through a cable. Let’s learn more about what a ferrite core is as well as its applications and characteristics.

So, what is a ferrite core? Ferrites are ceramic compounds with permanent magnetic properties. Ferrite cores are made of metal oxide ceramics containing a mixture of iron oxide and oxides of magnesium-zinc or nickel-zinc. The mixture is pressed and extruded to form the required core shapes.

There is a variety of materials available to make ferrite cores. Given the array of ferrite materials, the shape is another important parameter to consider during the ferrite core design stage. The packaging style of ferrite cores also plays an important role in their application as electromagnetic interference (EMI) filters.

How Do Ferrite Cores Suppress Noise?

At high frequencies, the quality factor of ferrite cores is low and offers minimum issues associated with resonance. When a ferrite coil is inserted into a conducting wire, it forms a coil inductor of one turn. When current flows through the coil inductor, magnetic flux is produced in the ferrite core. The electrical energy is converted into magnetic flux in the core. Whenever the current flowing through the conducting wire changes, it changes the magnetic flux linked with the coil. According to Faraday's law of electromagnetic induction, any change in current causes magnetic energy conversion to electrical energy. The conversion to electrical energy is subjected to magnetic losses called hysteresis losses.

Some fraction of the noise in the current flowing through the conductor or cable gets eliminated as magnetic losses. This way, the ferrite core greatly helps suppress noise or EMI in the cable. If you analyze the impedance characteristics of ferrite cores used in noise or EMI suppression applications, you may find resistive components dominating at the operating frequency. As the ferrite core becomes lossier at the operating frequency, the noise suppression improves.

The careful selection of ferrite material is critical when designing a ferrite core. Depending on the impedance characteristics at the operating frequency, the behavior of a ferrite core changes. With Cadence PCB design and analysis software, you can design, simulate, and analyze ferrite core functions in your circuit.