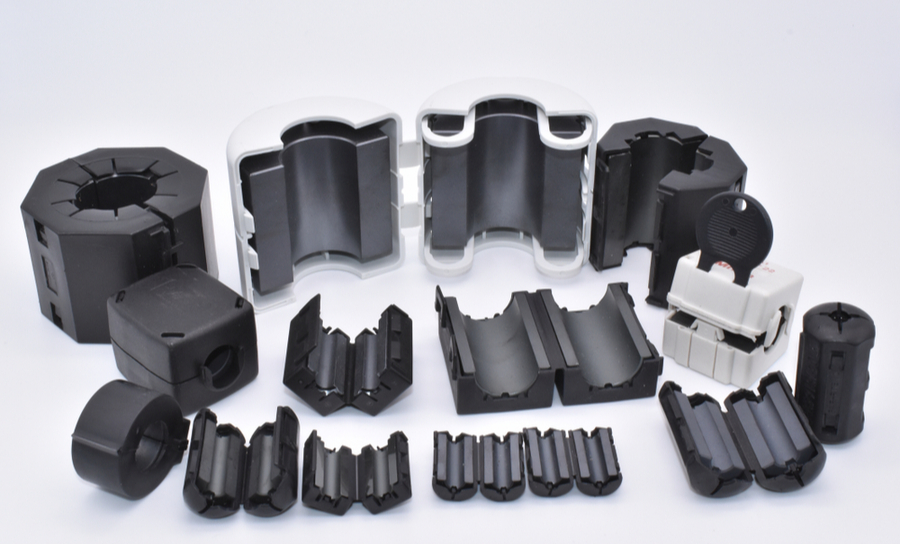 When we think of ferrites, discovery and technological progress are probably the last words that come to mind. Yet, the discovery of hard ferrites or magnet material gave ancient navigators the “lodestones” that they needed to locate magnetic north. The properties associated with hard ferrites triggered the curiosity that led to the early research into electromagnetism by Oersted, Faraday, Maxwell, and Hertz. During the 1930s and 1940s, more research led to the commercial production of soft ferrite passive components that enabled progress with inductors and antennas.

Today, power applications and our continual quest to suppress electromagnetic interference depend on the use of highly permeable soft ferrites that consist of ceramics blended from a wide range of metal oxides that form a magnetic core. The operating characteristics of ferrites depend on kinds and ratios of the metal oxides. Most ferrites consist of either a manganese-zinc blend (Mn-Zn) or a nickel-zinc (Ni-Zn) mix. Because Mn-Zn ferrites have high permeability and a low specific resistance, the ferrites remain limited to frequencies of 1MHz or less. Ni-Zn ferrites have low permeability and a high specific resistance and work well for noise suppression. 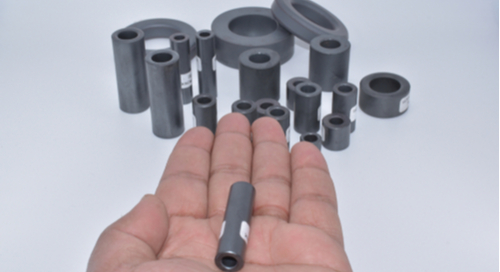 Working with ferrites requires an understanding of the types of circuits they work well on.

We can use soft ferrite chokes and clamps to reduce radio frequency interference (RFI) in an electrical conductor. For that reason, ferrite chokes can attenuate interference for switched mode power supplies. Ferrite chokes--or beads--attenuate high-frequency EMI in a circuit by working as a low-pass filter. Only low frequency signals pass through a circuit. Unlike a traditional low-pass filter that works for a wide band of frequencies, ferrite chokes and clamps only attenuate frequencies that occur within the ferrite’s resistive band. Wirewound ferrite chokes provide more design flexibility with a high magnitude of attenuation over a wide frequency range, lower dc resistance, and higher current ratings. While chip ferrite beads offer value, the devices have a limited attenuation and frequency range.

When we place two halves of ferrite around a conducting wire--such as a power cable, we have a ferrite clamp that provides an inductive impedance for signals traveling through the cable. Ferrite clamps and chokes follow Faraday’s Law in that a magnetic core place around a conductor induces a back electromagnetic force (EMF) in the presence of a high frequency signal. Given the high permeability of ferrite, the material offers less resistance than to the flow of magnetic flux in the conductor and--as a result--the ferrite absorbs noise.

Match the Best Ferrite Choke or Clamp to the Application

Because ferrite chokes and clamps are resistive, the devices can cause voltage drops in a circuit. The resistive properties of ferrite devices also may cause unwanted heating as high frequency energy dissipates. Always check the manufacturer’s specifications for the maximum DC current, and the DC resistance rating. Any ferrite choke or clamp must have a DC current rating more than twice the value of the required current for the rail. Design teams can use PCB design software and design rules to determine the correct placement for chokes to avoid voltage drop issues. 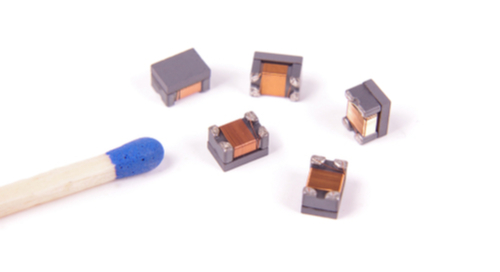 Because ferrite chokes are inductive and capacitive, circuit designs must also account for “Q” or the reactance of the inductor divided by the ac or rf resistance plus any dc resistance found in the choke windings. Chokes that have a high Q can create unwanted resonance in power isolation circuits. PCB design software provides the analytic tools to find the approximate value of ferrite choke inductance and to determine the resonant frequency cutoff.

The suite of design and analysis tools available from Cadence is here to help minimize the difficulty of your manufacturing process. Utilizing OrCAD PCB Designer is a great way to give your designers the layout capacity they need to finalize designs in a seamless manner.