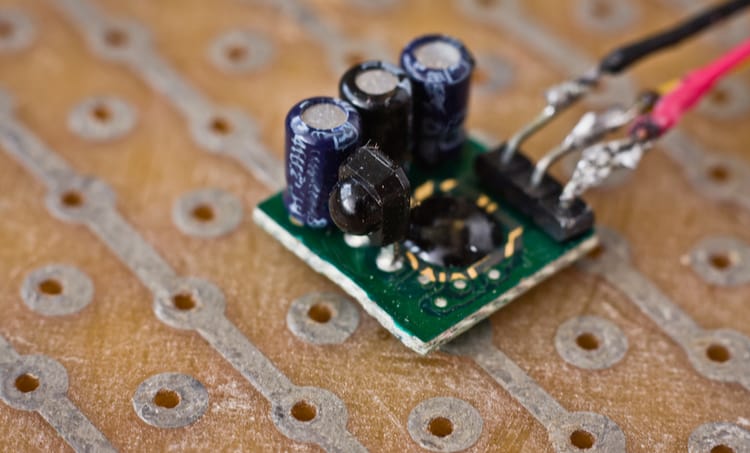 Simple circuits with photodiode bias can be used to gather sensitive optical measurements.

Your next optical system will need some kind of detector, and photodiodes are a standard detector element used to convert input light into an electrical signal. A photodiode is just like any other diode in that a voltage can be applied across the terminals. However, it’s also a light detector, and the input light in a photodiode generates a current.

When designing a circuit to collect and measure the current from a photodiode, it should be obvious that the current can also be controlled by applying some photodiode bias. The photodiode bias you use will determine how the device responds to input light, i.e., whether the output current is linear or nonlinear. When you need to integrate your photodiode into a standard detection and measurement circuit (i.e., with an amplifier) here’s how you can ensure you get the desired linear or nonlinear output.

To better understand why you might want to apply photodiode bias in an optical detector circuit, take a look at the standard diode equation with additional current generated by input light with optical power of P. In the equation shown below, the total output current is just the sum of the photocurrent, equal to PR, where R is the photodiode’s responsivity (measured in A/W). The remaining quantities in the photodiode have their regular meaning in the standard diode current equation.

Note that all photodiodes have some input optical intensity at which nonlinear effects begin to become apparent, and the above equation assumes we are operating with a linear optical response but a nonlinear electrical response.

The input optical power generates some electrons in the photodiode junction which then move away from the junction in reverse bias (thus the negative sign). By applying some bias, you can increase or decrease the reverse bias current. There are three regimes where the photodiode bias can be used to control the output current and how the photodiode responds to input light:

How to Apply Photodiode Bias

When you’re designing a photodiode circuit, the application of bias does not depend on the way in which the signal from a photodiode is collected and read. The typical way to use a photodiode with bias, whether with discrete components or in an integrated array, is to use a transimpedance amplifier. A typical arrangement is shown in the circuit below. 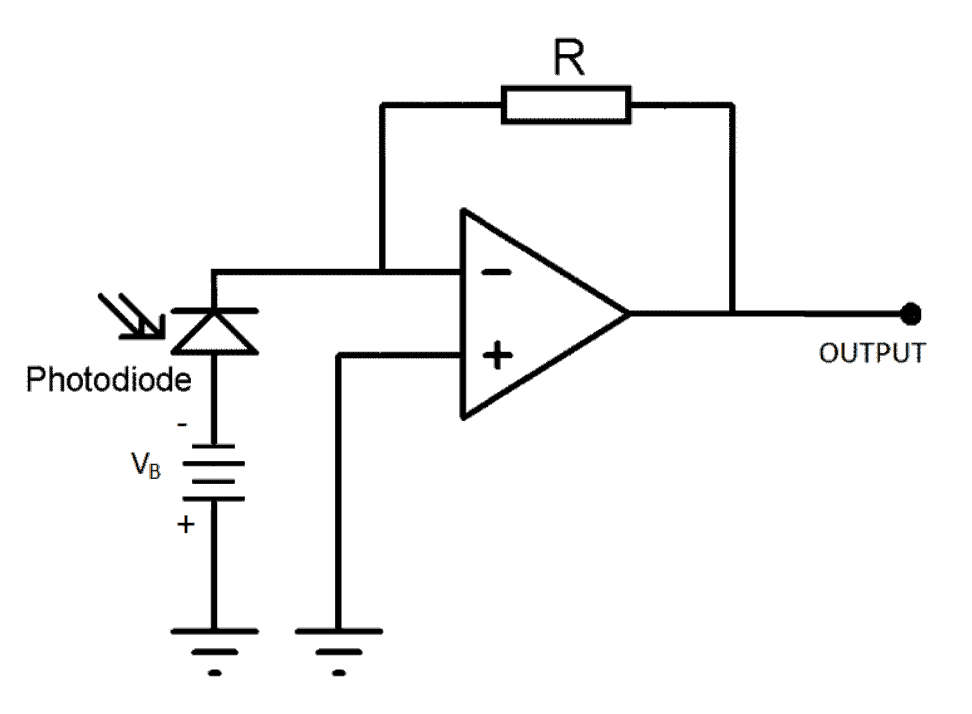 In the above circuit, the applied bias puts the photodiode in reverse bias, so we are operating in photoconductive mode. This circuit could also be used with high reverse and an avalanche photodiode, which would provide high gain for detecting low-level optical signals. To run the circuit in forward bias, simply flip the voltage source around.

Even though a photodiode is an optically linear circuit, it is also an electrically nonlinear circuit. Because of this, a photodiode needs to be designed by simulating a load line for the photodiode circuit. By adjusting the value of the resistor, you can extract a range of input light intensity values where the output current is linear.

To do this, you need a SPICE simulator with SPICE subcircuit models for your components. The important simulation involved here is to sweep the value of the photodiode bias and simulate the output current for different input light powers. This also requires placing a parallel current source on the photodiode circuit to simulate the device’s responsivity and input optical power. To learn more about this process, read this article for guidelines on these simulations.

When you need to design an optical detector circuit, you should use the best PCB layout and design software to lay out your board and ensure you apply the correct photodiode bias. Allegro PCB Editor includes all the PCB layout tools you need to capture your photodiode circuit, place components in a PCB layout, and verify the position of optical elements in 3D. You’ll also have access to advanced design verification tools and field solver utilities to analyze the behavior of your high-speed and high-frequency electronics.