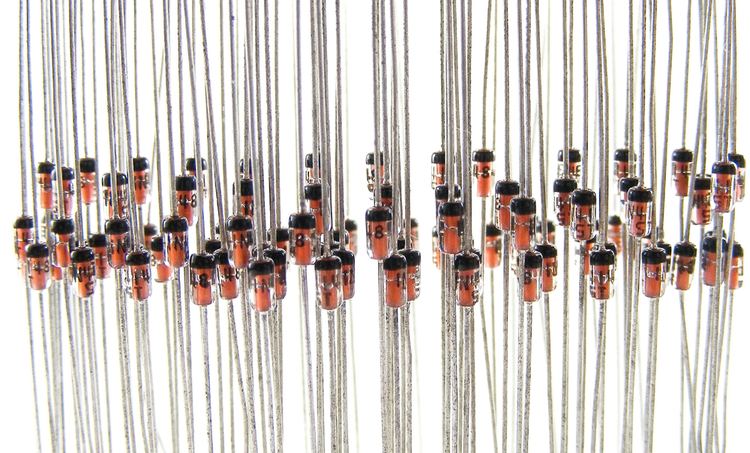 A small-signal model for a diode gives you a quick way to analyze nonlinear circuits.

When you’re a physicist or mathematician, you spend plenty of time taking series expansions of different functions. Engineers sometimes need to do the same, but they often don’t know it. One instance where you really need to take a look at series expansions is when you are examining the behavior of nonlinear electrical components and systems. Doing this makes your job of analyzing circuit behavior much easier.

To start, let’s look at the equation for the current in a diode as a function of voltage drop across the diode:

Current in a diode as a function of voltage drop across the diode. Please define n, k, and T

Admittance of the diode at its operating point.

Small signal model for the current in a diode as a function of its admittance and voltage drop V near the operating point V0.

This equation basically defines Ohm’s law for a diode within a small range of voltages. If, for example, you send an AC signal with small amplitude across the diode, the above equation tells you the relationship between the voltage and current. Simply plug in the function for the AC voltage, and it will give you the current. This enables the use of Kirchoff’s laws to analyze the current in a circuit with a diode near the operating voltage, including circuits with reactive components.

Why Use a Small Model?

There are two reasons to use a small signal model for circuit analysis in nonlinear circuits:

To see how this is helpful, consider the following circuit: 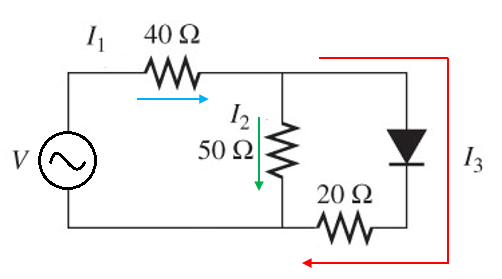 Example circuit with a diode.

If you try to calculate the total current in the circuit I1 using series and parallel rules, you’ll find that this current is a function of the voltage drop across the diode. The voltage drop across the diode is then equal to Vd = V - V40 - V20. This gives a complicated transcendental equation for I1 as a function of the current in the remaining components. Using a small-signal model allows the standard Gauss-Jordan matrix technique in SPICE simulations for linear circuits to be used to determine the voltage and current in every component (both for DC and AC inputs).

The other reason to use a small-signal model is to avoid the need to consider harmonics generated for AC signals. Mathematically, the current/voltage relationship in a nonlinear component can be approximated using a Taylor or Maclaurin series, which gives a high degree polynomial. For an AC signal, taking powers of the input voltage will produce higher-order harmonics of the AC input.

When the AC input is small enough, the generated harmonics will also be small and can be ignored. Otherwise, at large AC input, the current will contain extra harmonics that will be seen in the time domain and frequency domain. More complex methods like harmonic balance analysis are needed to consider the full AC behavior in reactive nonlinear circuits in the frequency domain.

The methodology used to describe diodes at a specific operating point can also apply to other components. The same series expansion and operating point technique can be used to approximate linear behavior in:

Small-signal models aren’t limited to individual components. Any circuit or N-port network that contains at least one nonlinear component is a nonlinear circuit. Therefore, the overall relationship between inputs and outputs can be described with a small-signal model. In terms of modeling with your circuit design software, you can construct a phenomenological model for a component and include it in a different schematic or circuit. You only need to examine the relationship between each input and output in your nonlinear circuit; what happens within each component is less important.