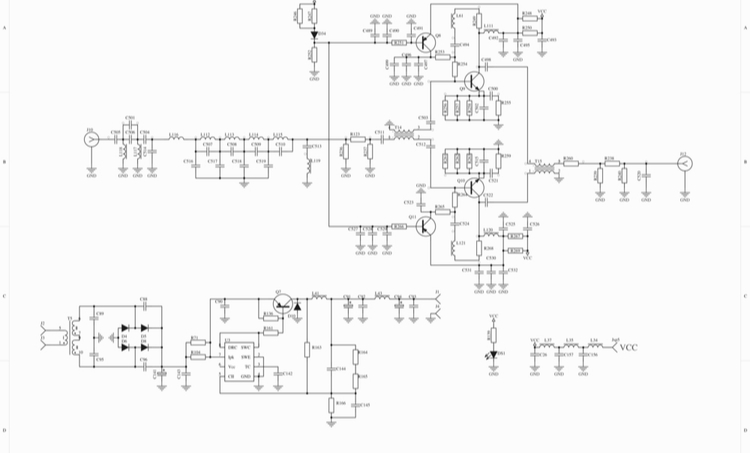 This RF power amplifier can use harmonic termination to engineer the output frequency content.

Reading through amplifier classes can be like reading through the alphabet, and the list of specifications on power amplifiers can be confusing. If you look at the output waveforms from different power amplifiers, and you recall your lectures on Fourier series for periodic signals, then you’ll know some amplifier classes use some basic waveform engineering techniques to produce a desired output. How can you create a desired waveform from your amplifier output, either at the PCB level or package level?

Enter harmonic termination. This simple technique is used to engineer the output waveform from a power amplifier by adding or removing some harmonic content. The standard way to do this is to take advantage of transmission line resonances on the input or output of your power amplifier circuit. This allows different harmonics in the amplifier output to be tuned in order to produce the desired waveform. Here’s how to take advantage of transmission line resonances as part of harmonic termination. Where Do Additional Harmonics Come From?

The only amplifier class that is intended for driving in the linear range is a Class A amplifier, where the output is simply an amplified version of the input sine wave. Ideally, there is no additional harmonic content in the output. Classes AB, B, and C can be thought of as having rectified linear output, but the positive and negative polarity signals can be recombined to reconstruct the input sine wave.

Power amplifiers for some RF products, such as Class J and Class F power amplifiers, run heavily in the saturation regime with some DC offset, and the additional harmonic content provides higher effective efficiency. Waveform shaping is performed by providing resonances at specific frequencies, and by removing certain frequencies from the output. This is the central ideal in harmonic termination.

If you can exert control over an infinite number of harmonics in the amplifier output, then the efficiency of an amplifier will approach 100%. In practice, strong control is only practical at specific harmonics, and only some output harmonics will dominate. Using a series or tank LC circuit is an effective way to provide resonance at a particular harmonic in the output spectrum. Integer multiples (even or odd) of the fundamental harmonic can also be controlled using a shorted transmission line with defined characteristic impedance.

Placing a series LC circuit as a shunt element from the gate input to ground, or from the output to ground, will provide resonance at a specific frequency. In other words, the impedance at this frequency will be zero, so current will be shorted to ground. If an LC tank circuit is used, the impedance at the desired frequency will be infinite. These circuits provide a simple way to tune the output waveform by strengthening or removing specific harmonics of the sinusoidal input.

LC tank circuit placed as a shunt element to amplify the voltage of a single harmonic on the output.

The 2nd and 3rd order harmonics are most important for waveshaping as they will have the highest intensity, thus any LC circuit needs to be designed as a bandpass or bandstop filter for these specific frequencies as part of harmonic termination. Note that the line connecting to the load is also a transmission line and will need to be designed with the desired characteristic impedance.

In this strategy, the goal is to design a transmission line with a length that provides strong resonances at specific frequencies. This is done by considering the input impedance for the line. The input impedance seen by the n’th harmonic can be written as a function of the harmonic number n:

If the line is placed as a shunt element, your goal is to tune such that the input impedance at a desired harmonic is infinity or zero. The same condition will apply to the next higher even or odd harmonics. The same idea applies to a series line between the transistor output and the load, although the load impedance needs to be included.

Simulations involving resonant transmission lines in harmonic termination can be rather complicated as the output and input capacitances on power transistors are highly nonlinear. In general, the gate and drain-source capacitances of a FET increase as the gate-source voltage increases. This is a known effect in GaN HEMTs and MOSFETs, and simulation models need to include this source of nonlinear capacitance when simulating amplifier behavior. This also complicates the use of harmonic termination in multistage amplifiers that are operating at saturation, which also requires use of load-pull analysis to maximize power transfer.