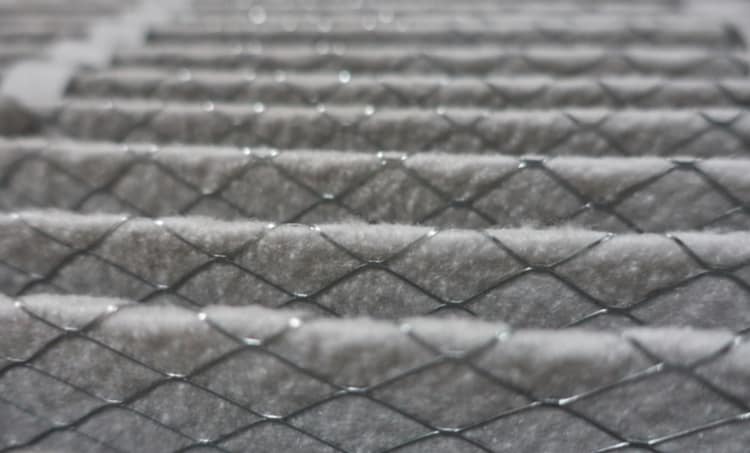 Keep your circuits as clean as the air in your house with a bandpass filter.

Filters are critical circuits for any engineer to understand, and they have simple mathematical representations that help designers visualize their functionality. As part of filter design, simulation, and evaluation, a Bode plot is a basic tool for visualizing a filter’s output for a harmonic input. In particular, for linear time-invariant (LTI) systems, a Bode plot shows the transfer function for a circuit, which is a basic part of simulation of causal systems in PCBs and integrated circuits.

A Bode plot is simply a logarithmic plot of the transfer function for a circuit. This includes a bandpass filter Bode plot, which can be used to view the resonant or non-resonant behavior of a system. There are a few important points that can be determined from a filter’s Bode plot:

The transfer function for a circuit can be calculated by hand using Kirchoff’s laws and Ohm’s law, or it can be determined from a SPICE simulation. Note that transfer functions are only defined for LTI systems, although there is plenty of research literature on nonlinear time-dependent representations for transfer functions. For a simple linear circuit like a bandpass filter, it’s easy to calculate a Bode plot, as shown in the following example.

Example for a Series RLC Circuit

Perhaps the simplest bandpass circuit you can construct is a series RLC resonant circuit, where a resistor, capacitor, and inductor are placed in series. This circuit provides bandpass behavior with gain inside a narrow bandwidth. The maximum gain and phase of the signal depends on the value of the resistor in this network. Finally, the output from this circuit, which is normally taken across the capacitor, can be connected to a load component. The load impedance then determines the exact transfer function in the system, which can be visualized in a Bode plot.

The circuit below shows an example of a series RLC circuit with the output connected to a 20 Ohm load resistor. The load is arranged in parallel with the capacitor, i.e., the filter’s output is taken across the capacitor. The series resistor R will determine the level of damping in the circuit and the circuit’s transfer function, as well as the total power delivered to the load.

The bandpass filter Bode plot below shows when the resonance occurs for various values of the series resistor R. We can see strong resonance at R = 0.2 Ohms, which is to be expected as the damping in the circuit is proportional to R. At larger values of R, we see low-pass filter behavior; this is because the capacitor will have the highest impedance at low frequencies, so all the input voltage will be dropped across the capacitor and load resistor. We can also see that phase reversal occurs beyond the resonant frequency, i.e., the output and input are nearly completely out-of-phase. 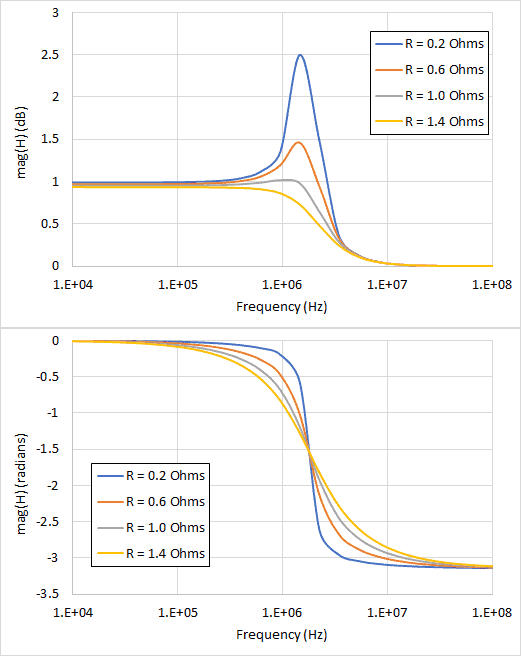 Although the output is taken across the capacitor in this example, it could also be taken across the inductor. In this case, we’d still have a resonance at the circuit’s natural frequency. In addition, we’d have high-pass behavior above the resonant frequency, and the same type of phase reversal seen above at low frequencies. At high frequencies, the output voltage and the input voltage are completely in-phase. This is to be expected from Ohm’s law, i.e., all the voltage would be dropped across the inductor because it has the largest impedance. 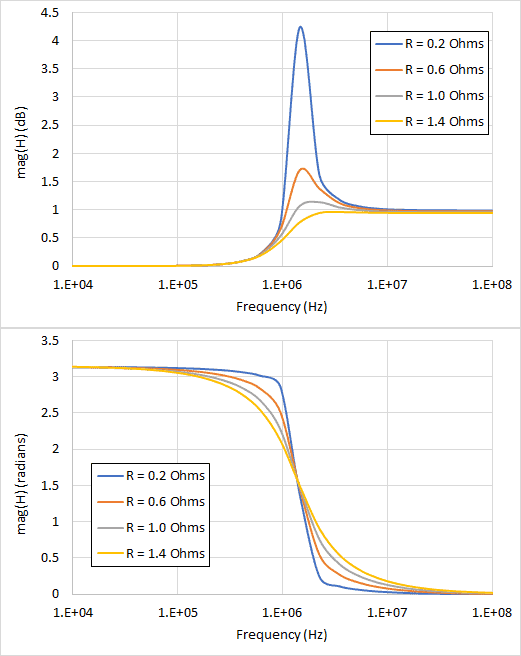 From these two plots, we learn something quite important about series RLC circuits and the phase reversal seen in their Bode plots: The zero output voltage corresponds to complete phase reversal on the output voltage compared to the input. In other words, the input and output voltage interfere destructively and cancel each other out. This is why, in each configuration, no power will be dissipated across the load resistor within a certain frequency range.

After you use the front-end design features from Cadence to build your circuits, the electrical behavior shown here can be viewed in the frequency domain and time domain using PSpice Simulator. You can easily create a bandpass filter Bode plot and many other simulations with a powerful SPICE simulator. You’ll also have access to a range of circuit analysis and optimization features.