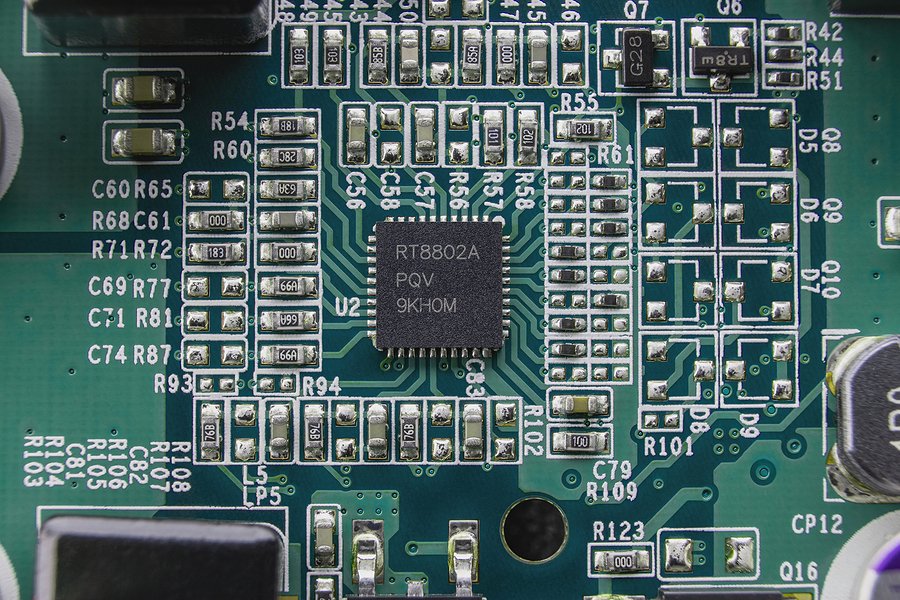 These days, all digital signals run at high speed. The distinction today is whether a digital signal is “fast” or “too fast” in terms of its edge rate. When we examine interface specifications, and we see that signals start to transition within the ns range, it is tempting to slow down these signals so as to reduce possible problems with noise. In a bus like I2C or SPI, it is tempting to place a series resistor to reduce the rise time slightly, but without affecting the data transfer rate.

Should this be done on a slower single-ended bus, and if so, what values of resistors should be used? The answer is “it depends” and it requires looking at the bus capacitance or load capacitance, depending on the interface specification. We’ll look at two types of termination that are cited for interface speed reduction: series resistor termination and RC termination.

If we think about how RC circuits work, we can more easily understand how a series resistor or an RC snubber/low-pass filter will affect a signal transition. Digital logic circuits are nonlinear with typically low output impedance and high input impedance. The input impedance is capacitive, which is why you will see a specification for a load capacitance when looking at signal transition times in some component datasheets. An example for a GPIO bank is shown below.

In the above example, for a load capacitance of 20 pF, the maximum rise time of 3 ns translates into an equivalent series resistance on the load’s input pin of 150 Ohms (using an RC time constant calculation). So, if we were to increase the resistance or capacitance on the bus, we would expect the rise time to increase by a proportional amount (assuming a lumped element bus). This is the correct motivation for RC termination, and a similar idea applies at the source side for series resistor termination.

This involves placing a resistor in series with the source’s I/O pin. The idea here is to slow down the transition between two voltage levels for a digital signal. This is appropriate in, for example, where the source simply switches much too quickly to be useful. You might see this in some advanced processors, and it is common in FPGAs.

The typical resistor size can be as low as 22 Ohms or as large as 100 Ohms, depending on the bus capacitance and the rise time value for a rated bus capacitance. Make sure to check your datasheet for this specification.

There are some guidelines stating that a series resistor slows down a digital signal transition through impedance matching. This is not the mechanism by which the transition is slowed.

Instead, the addition of the resistor applies damping that increases the bus time constant because it is effectively in series with the bus capacitance, bus inductance, and load capacitance. In fact, if the bus is longer, but not so long that propagation is observed during the rise time, this reduces the edge rate as well by applying more capacitance.

In an open-drain specification, like I2C, any series resistor should be small or omitted and instead the value of the pull-up resistor should be increased if the signal needs to be slowed down. In the case where it is believed that impedance matching is needed on a particular source output, a series resistor will be cited as an impedance matching element. While this is technically correct, it is not something you do in practice except in specialty logic or discrete RF systems that require a specific system impedance (more on this below).

An RC termination circuit is applied at the load end as a low-pass filter. If this is applied, it should be used instead of series termination, not in addition to it. The usage of RC termination as a parallel terminating element effectively increases both the resistance and capacitance of the input pin on the load as described above.

RC termination on a single-ended net.

This termination only slows down the signal once it reaches the load end of the trace. Therefore, if this is used to slow down a fast rise time signal, the reduced edge rate will only be observed at the load end of the trace, while the source end will still look very fast. This means the signal can still create EMI and crosstalk during propagation.

When to Not Use Series or RC Termination

One reason it is appropriate to use an RC circuit or series resistor for termination is that the interfaces are not terminated at a specific impedance. In other words, in single-ended interfaces like SPI or I2C where this termination might be applied, there is no impedance specification.

Series termination or RC termination should not be used on certain interconnects in the following instances:

In single-ended buses like SPI, the source simply has low impedance (or it switches between low and moderate output impedances) while the receiver has some rated capacitance that acts as a high impedance load. These systems do not need to rely on impedance matching, so it is appropriate to add series termination on the source side/RC termination on the load side. The exception is when the bus is electrically long, which requires comparing the bus length to the transition time.

Make sure to understand which type of interconnect you are using to ensure termination does not impede signal transmission. When you need to place series termination or parallel termination at the ends of a PCB interconnect, make sure you use OrCAD, the industry’s best PCB design and analysis software from Cadence. OrCAD users can access a complete set of schematic capture features, mixed-signal simulations in PSpice, and powerful CAD features, and much more.