The thing that distinguishes the Internet of Things from regular things is that IOT devices communicate with you and with the other things. One of the main thrusts of 5G is to enable our things to have better communication. There are exceptions to the rule but generally, this calls for wireless technology that favors low power consumption over high data rates or long links. Let’s have a look at the wireless local area networks in play for this space.

Wi-Fi is the All-Purpose WLAN Solution

Wi-Fi is a great place to start. There are many flavors that satisfy the requirements. Traditional protocols under the IEEE 802.11 umbrella include the abgn protocols. Dollar for dollar, these are a performance bargain due to the maturity of the technology. One of the caveats to this class of radios is that b and g use the crowded 2.4 GHz spectrum while a uses 5 GHz. Using the n spec will be more costly since it uses multiple radios to cover 2.4 and 5 Ghz. The data rates increase in reverse alphabetical order. Most routers support all of these amendments to the 802.11 spec. 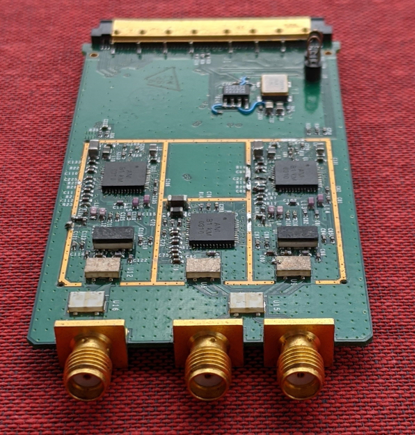 Image Credit: Author - A Wi-Fi board with three receivers and two transmitters.

The IEEE went through more amendments of the Wi-Fi spec and periodically consolidated them. What came out of it was 802.11.ac which they decided was confusing. The router manufacturers had been combining the above letters so the backward compatible version might have been called 802.11.abgnac. So, the marketing term for the ac amendment became known as Wi-Fi 5. Adding 1 through 4 was more of a retroactive step on the previous iterations.

The letter combos continued with the 802.11ad amendment which introduced the 60 GHz spectrum. Data rates soar above the previous iterations so this became WiGig. The physics at 60 GHz are a challenge. The short wavelength ends up having very short range. It can basically replace an HDMI cable.

The revisions keep on coming as the IoT applications go beyond a TV mounted on the wall. There is promise for interactive gaming headsets. AR/VR can be more immersive when the cord is cut. This, along with the whole IoT explosion, has led to a flurry of amendments. The specification body has used up the two-letter designations that start with “a” so we have ax for Wi-Fi 6.

Meanwhile 802.11ay extends the capabilities of ad.  It’s not easy to keep track of all of the improvements. There’s more on the way that will be using two-letters that start with b. The goal is to allow everything they can think of to connect using the Wi-Fi pipeline. Your entry point on the alphabet soup will determine the cost of the radio portion of the circuit. The most popular types are available in module form for quick implementation.

Bluetooth is the Choice for Audio/Video Applications

The main application of Bluetooth is streaming audio. It uses low power and has low range making it ideal for the job. Initially, a standard was developed for Bluetooth but it has morphed into a special interest group with thousands of members. It’s a pay-to-play deal where the relevant patents are licenced to any producer that wants to use the technology and the trademark. 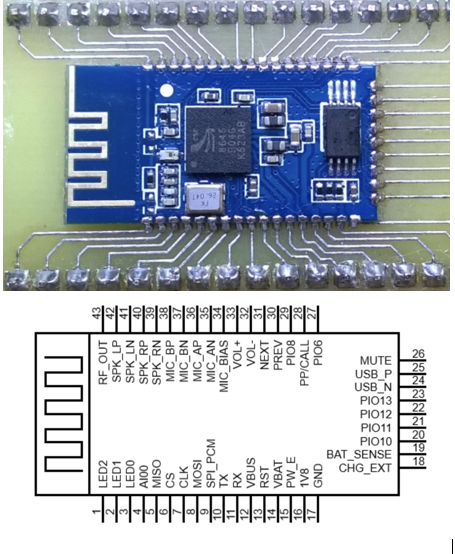 Image Credit: Bois83 - A Bluetooth module and the schematic symbol of the radio chip.

Like, Wi-Fi’s original A-band, Bluetooth occupies slices of the crowded 2.4 GHz spectrum. The radio-range is measured in meters as it replaces the wire between a microphone and an amplifier for a wireless mic or between a transmitter and a powered speaker. The actual source of the content sent to the speaker will likely come from other wireless protocols or over a cable.

The specifications have evolved over the years. About ten years ago, when a low-power Bluetooth Low Energy (BLE) version came along, I jokingly called it “Greentooth”. This is when Bluetooth started to make sense for use in cell phones. Uses include access control, pico-networks of closely spaced computing devices and wireless gaming controllers among other things.

Since then, more incremental speed has been offered, security has been enhanced and a number of other efficiency improvements have focussed on the IoT market. We’ve added the notion of “smart” and moved from the 4th generation to the 5th with Bluetooth 5.2 reigning as the current state of the art. The enhancements continue to help with encryption, location detection, rate and range and other quality of service features.

Zigbee is a lot like Bluetooth with a few differences. For one, Zigbee is still under the auspices of the IEEE with their 802.15.4 specification. The frequency varies by location so you’ll have to know your market(s) and design accordingly. A dual-frequency implementation will include the usual 2.4 GHz spectrum and a sub-GHz channel specific to the locality. The main thrust is the ability to create a mesh network that can expand the reach well beyond a single pair of radios. This is something to look into for the smart home.

Most Zigbee devices are battery operated. The spec was written for mobility. Low power consumption is a hallmark of these devices. In order to qualify, a product has to be able to work for two years on the same battery.

The ecosystem includes three levels of functionality. Starting at the top a Zigbee Coordinator is the brains of each network and there is only one unit in the network that serves this purpose. The security and data storage of the network is housed within the Coordinator.

The Lieutenants of the network are the Zigbee Routers. They act as repeater stations. This function can be assigned to several different items that run off of the wall power. Being a router is generally incidental to these types of devices. Always-on devices like security cameras and thermostats will fill this role.

Finally, the bottom rung is occupied by the Zigbee End Devices. This is where the low-power requirements are in play. There is often a considerable amount of sleep time for the End Devices since they are not used to relay data from one thing to another. When you want some natural lighting in a room, your smart speaker will tell the blinds to raise. The blinds will never tell a soul. 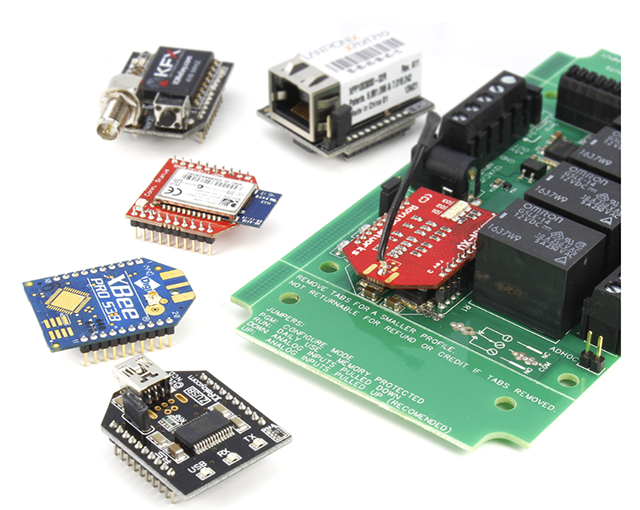 NFC is the Touch and Go Winner

Near Field Communications (NFC) are featured in point of sale and entry access. A smart card with no power of its own gives up the embedded data that leads to a transaction. It works by scavenging power from the card reader. NFC is a close cousin of RFID with the main function of turning a phone into a wallet. Touchless payment is obviously a fast growing technology in today’s world.

Encryption is obviously important but, with a range of around three centimeters, it is such a small network that it’s pretty hard to hack. Besides smartphones and doors, NFC can be built into laptops, cameras, watches and other mobile electronics.

A popular application is to embed information into a poster so that passers-by can touch their device on a spot that provides additional information. Like a QR code, the information isn’t much and it only goes one way. Typically, we’re talking about a link to a website. Nonetheless, the NFC chip with the matching network and the antenna are a piece of work. 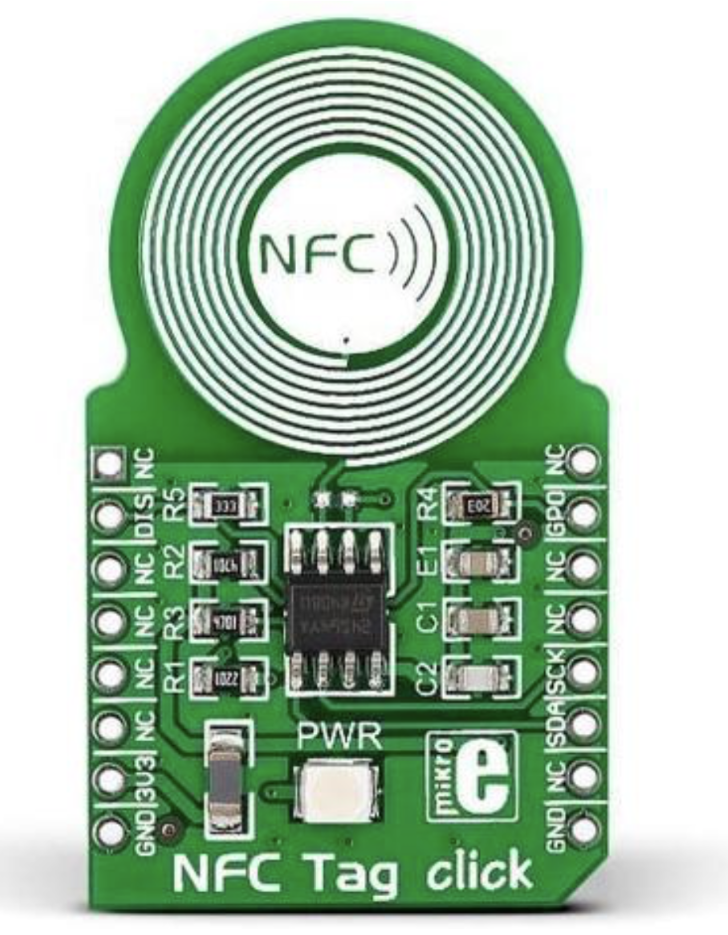 There are at least two things in common with all of these technologies. It is a sure bet that there will be controlled impedance transmission lines. The other commonality is that the main drama in the layout will have to do with power delivery.

It will be taken for granted that you can create a single-ended 50 ohm trace. It will be sufficiently wide to achieve the impedance target. Ground will be poured around the traces to  isolate the transmission line from other traces. The islands of ground pour on the surface will be stitched to a continuous reference ground plane below the traces. The placement will be worked out so that these are the shortest possible connections.

Now, the hard part. Providing sufficient power seems like it would be easy. Put a big shape between the power supply and the radio and call it good. Nope. That big shape is a big radiator. You actually want to have enough of a trace to supply the device and no more than that. A carefully calibrated trace will go around the board and connect the bypass caps of that voltage together. Then, a little trace will connect the cap to the VCC pin.

Some devices will require star routing of the power net(s). In this case, a single capacitor is responsible for bypassing two or more power pins. The thicker trace routes to the cap and multiple traces route to specified voltage pins. It isn’t random but rather very specific as to which power pins are connected to which capacitor. The location of the ground via also plays a part.

Quite likely, the RF engineer and the Power Integrity engineer will both be simulating their respective circuits. Antennas are always tricky and iterative. In mobile devices, the power gets as much or more scrutiny. Cost is a key driver of designing these RF boards and modules. The layer counts generally run from two to eight layers using common materials. Construction will use plated through hole vias unless the chip set requires HDI stack-ups.

There are many turn-key solutions on the market so it may be most efficient to license someone else’s technology or make use of existing modules for the wireless link. If you are doing your own design, there are fees to pay to play for each type of radio. You also have FCC requirements and other regulations to deal with. Designing analog circuits requires a capable CAD solution to manage these requirements.