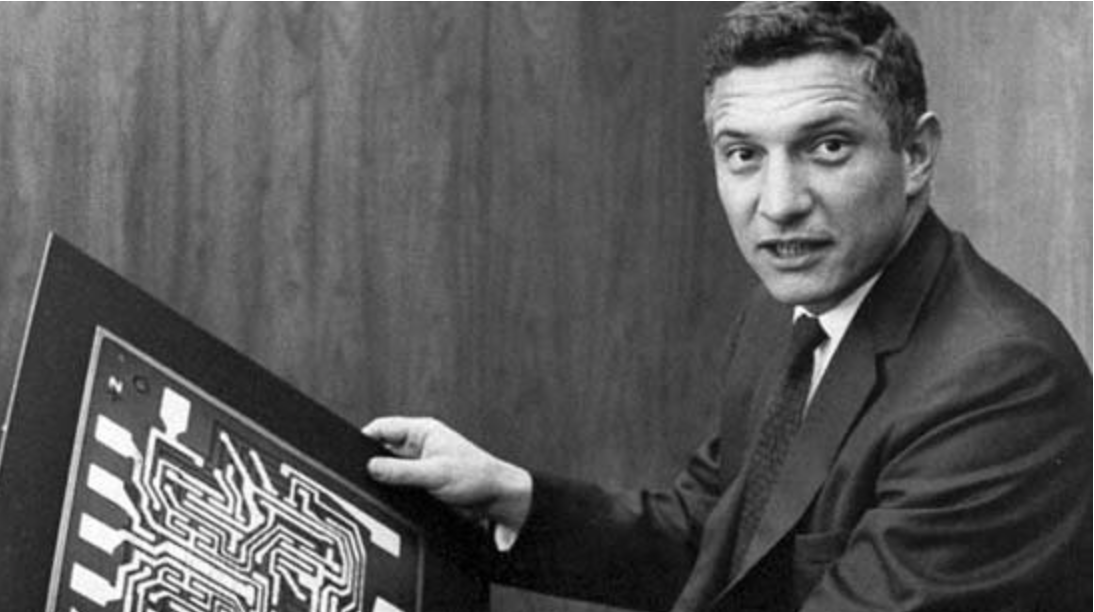 Image Credit: Britannica - Robert Noice as a Young Buck in 1959

Two gentlemen (or maybe not so gentle) named Steve are a good place to start. Jobs and “Woz” who planted Apple’s seed in 1976 come to mind. The “traitorous eight” who ditched the irascible William Schokley’s lab to form Fairchild Semiconductor in ‘57 and who put the ‘Silicon’ in “Silicon Valley” should get a nod. Hewlett and Packard did a start-up way back in 1939.  Even those two pioneers owe a debt to the real founders.

Silicon Valley wasn’t always known as such. “The Valley of Heart’s Delight” was the nickname for a lush patchwork of orchards that came before. While the city of San Jose was founded way back in 1777, the founders of Silicon Valley were working on the technology even then but they were a continent and an ocean away. 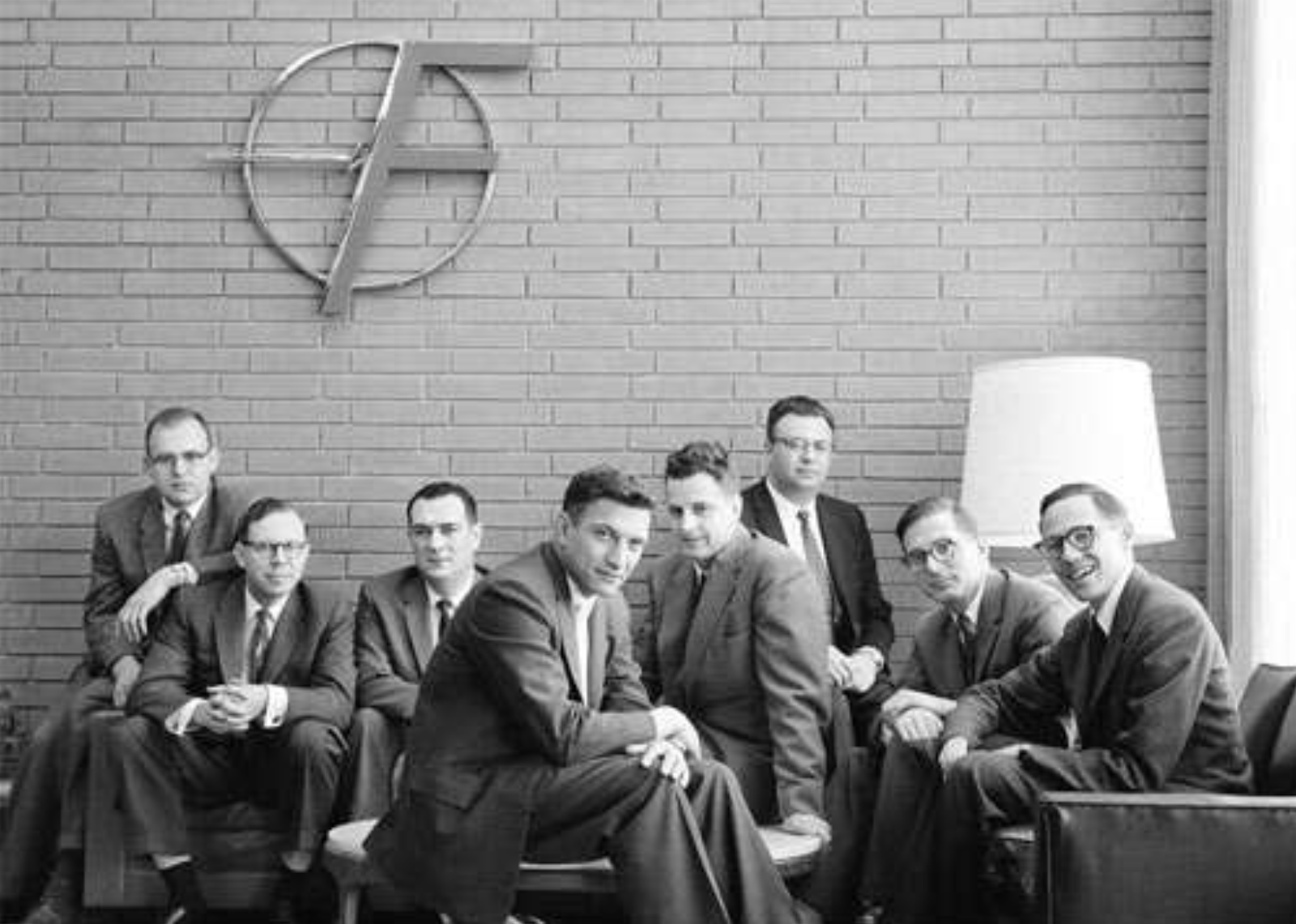 Image Credit: The Computer History Museum which is two doors down from the Microsoft office where I’d be working in normal times, the Traitorous Eight include Intel founders (1968) Gordon Moore and Robert Noice.

1800 AD: The Year of the Battery - When “Everything” Changed

Set the way-back machine to the time of Alessandro Volta (1745 - 1827). Remember that name. At least remember the Volt. His battery was a vast improvement over the Leyden Jar which was more of a capacitor that stored a bit of static electricity. Within six weeks of Volta’s announcement, a pair of Brits used his Voltaic stack to separate water molecules into hydrogen and oxygen thus discovering electrolysis. From that point forward it was game-on for the field of electrochemistry.

A Frenchman named Joseph Fourier (1768 - 1830) added a chapter to Isaac Newton’s math book but also brought us the Law of Conduction based on another branch of Newton’s work. Fourier analysis is still a thing for programmers of today and will be for those of tomorrow. The way we move discrete non-linear data is based on his genius thoughts.

Georg Ohm (1789 - 1854) expanded on the knowledge of the time. Aside from Ohm’s Law on electromagnetism, he also passed down Ohm’s Law of hearing. While not a perfect paper, it made the connection between the mechanical properties of sound waves and the electrical impulses that our ears feed to our brains. We have another pair of “spectrum analyzers” on the front of our heads too, we call them eyes. Meanwhile Ohm’s name survives as the unit of measure for our resistors

Michael Faraday (1791 - 1867) took an even deeper dive into electromagnetism. The value of every capacitor carries on his name. Doubling as both a Physicist and a Chemist, he invented the electric motor and the dynamo at a time when the height of technology was based on steam power. As an electrochemist, he came up with the notion that every type of material has a specific inductive capacity. He is noted as one of the most brilliant minds of his time. 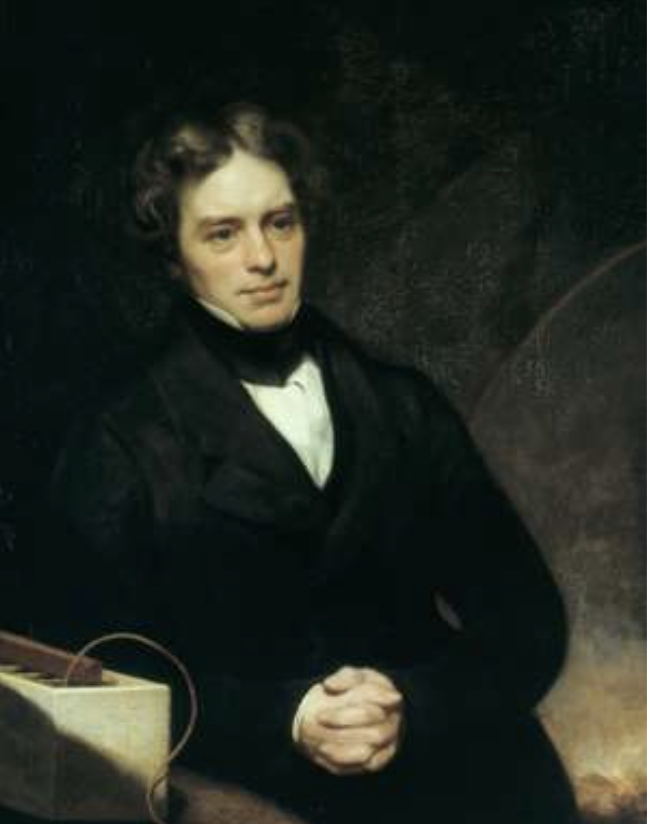 There may be a bit of puffery to that last statement since I got it from Britannica.com and he is a son of the much venerated kingdom. Basically, all of these facts and figures are scraped from there. The reading level suits the effort and scholarship that I want to put into this material.

Why Are Women Seldom Mentioned in 19th Century Scientific Developments?

Where the encyclopedia gets very thin is in the mention of the women in science of the time. The Universities of “The Enlightenment” otherwise known as the Age of Reason were basically a boys club. Go figure. There were mothers, sisters and wives who provided a foil for their sons, brothers and husbands but the same symptoms of neglect persist to this day.

Margaret Cavendish, the Duchess of Newcastle upon Tyne (1623 - 1673) was noted for her contribution to physics. Note that Margaret’s life corresponds with Isaac Newton’s. That moves her back in the timeline to the same degree that we have moved forward since then. Nonetheless, it marked the beginning of the age.

Laura Bassi (1711 - 1778) gets a little bit of column space for being the first woman to attain a Professorship at the University of Bologna. She’s another exceptional person who predates the final thrust of the Enlightenment. Britannica notes that the scientific ladies of the time would write about their ideas under a manly pseudonym. It doesn’t seem fair but that’s how history is written. I’d still recommend a Britannica subscription if you are so inclined.

Inductors Resist Changes in Current with a Diversion to the U.S.A

Electromagnetic induction was moved forward to a more practical level by an American named Joseph Henry (1797 - 1878). While Faraday beat him to the punch on the discovery of induction by about a year, Henry introduced the concept of self induction. Another all-rounder, he helped with the invention of the telegraph and also figured out that sunspots are cooler areas. While he takes a back seat to that guy on the one hundred dollar bill, his claim to fame includes creating the most powerful electromagnet of the time. Our circuits require inductors and their values are measured in Henrys.

Jumping back across the pond, a British fellow named James Prescott Joule (1818 - 1889) laid down the first law of thermodynamics regarding the conservation of energy. According to this law, energy is energy whether it is mechanical, thermal or electrical; and one type can be converted to another or likely two others since a transformation of any type is likely to have some spillover into another form.

His work with William Thomson (who became known as Lord Kelvin) established the “Joule-Thomson effect” whereby refrigeration became a thing. Joules are a unit of measure adopted by the SI (International System of Units) that is equal to the work done by one newton acting through one meter sort of like a foot-pound but neither of those are the accepted units in scientific circles.

A French dandy by the name of André-Marie Ampère (1775 - 1836) gave his name to an SI unit of measure that ties ohms and volts together. This is the easiest bit of math so I’ll go ahead and quote that “one amp is produced in a resistance of one ohm by a potential difference of one volt.” 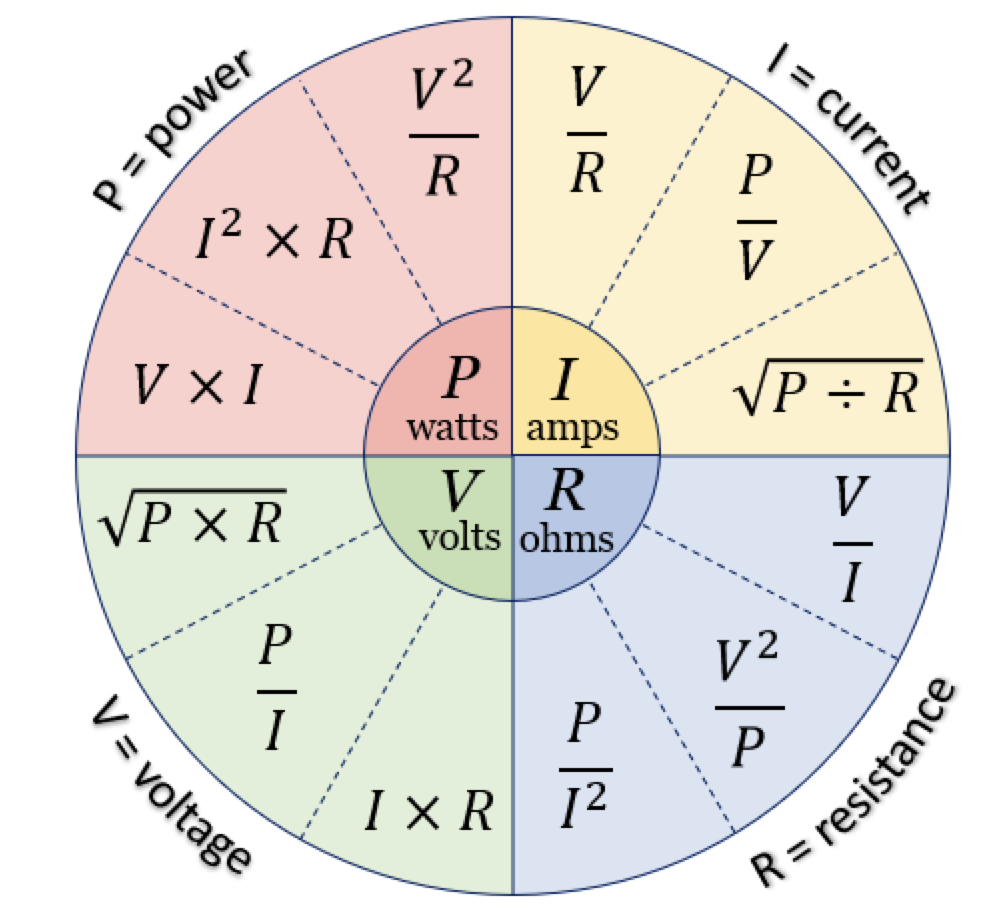 Image Credit: GIGAcalculator - All of the relationships between power, current, voltage and resistance.

Another Frenchman, Charles-Augustin de Coulomb (1736 - 1806) built on Joseph Priestly’s work and established the “inverse square law of attraction and repulsion of unlike and like magnetic poles”. His eponymous SI unit, the coulomb is defined as “the quantity of electricity transported in one second by a current of one apere”.

Watts up? My Time Is Just about up but Let’s Do One More

The final piece of this story is about James Watt (1736 - 1819) who wasn’t so much of an electrical type but made a fortune and a lasting legacy by improving the steam engine. Before that time, the human race had a negligible impact on the planet. Thanks to Watt, we’re now in a period called the Anthropocene Epoch.  Kicking off the Industrial Revolution by mechanizing the work on just about every labor intensive endeavor changed the world - for better or worse. To honor his contribution, the SI adopted the watt that is equal to one joule of work performed per second. All I know is that I want more of those under the hood of my collection of amplifiers.

Amps, watts, farads, ohms, and all of the rest of these things popped up over the cusp of the 17th and 18th centuries much like the computer and internet straddled the 20th and 21st centuries. We stand on the shoulders of giants who stood on the shoulders of the giants before them. I get to have an easy life at my ECAD station because of the explosion of ideas that came out of both of those periods. It’s a good time to be alive.