When you get started in any profession, your first Manager will have a great impact on the rest of your career. An appreciation for the job comes from their passion. Fortunately, my first ECAD Manager was sort of a father-figure. He drove a 15 passenger van because that was the vehicle required to take his family anywhere. A man of faith, he took the edict to be fruitful and multiply very seriously. More than 10 children called him “Dad”.

The rest of us called him Merril. Our job was to design and build hardware for the Department of Defence along with a special project for the Federal Aviation Administration. The FAA project was called Wind Profiler. It was a huge cylindrical contraption, certainly the largest piece of equipment I can remember. Operationally, the Wind Profiler emits low frequency Radar waves straight up that detect wind shear by measuring slight differences in air pressure. More recently, they are also employed around wind farms to protect the generators. 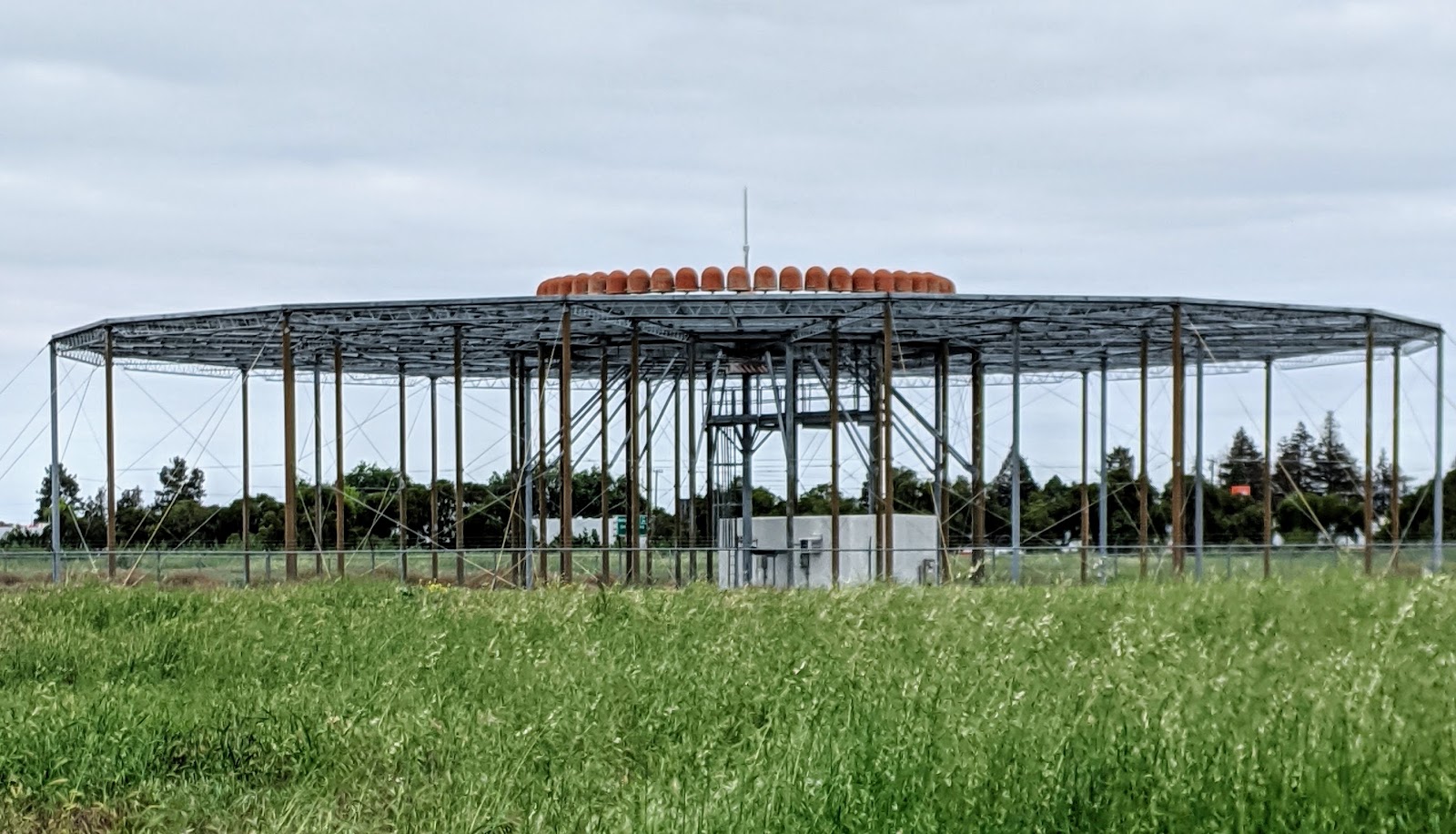 Image Credit: Author - The Wind Profiler radar installation uses an RF amplifier for each of those orange domes, about 50 in all. The “roof” is the receiver antenna.

At the beginning of this daunting project, the main obstacle was the schedule. There was going to be an array of RF amplifiers all the way around in a circle approximately five feet in diameter. Chunky N connectors tied the slightly trapezoidal boards to the antenna array through long cables. The technical challenge was that output power was tightly regulated and spurious emissions outside of the band of interest had to be very low. We had to generate a huge amount of RF power without bleeding over into the rest of the spectrum; not an easy task.

“Failing to plan is the same as planning to fail.”

We realized that simulations were only going to get us so far. We would have to build prototypes and do a real world test and our next iteration had to be the final form. If we wanted a design win, that’s the schedule. We needed a plan. That’s when Merril’s fatherly advice was most clear. “Failure to plan is the same as planning to fail.”

A single board would not generate sufficient power to measure air density. The oxygen and nitrogen that make up our atmosphere are not very reflective to radio waves. One full-scale unit made up the entirety of the preproduction build. Spectrian had their own LDMOS wafer fab. The chip was the same form factor as a Motorola device. This was an insurance plan because our chips were not all that reliable. 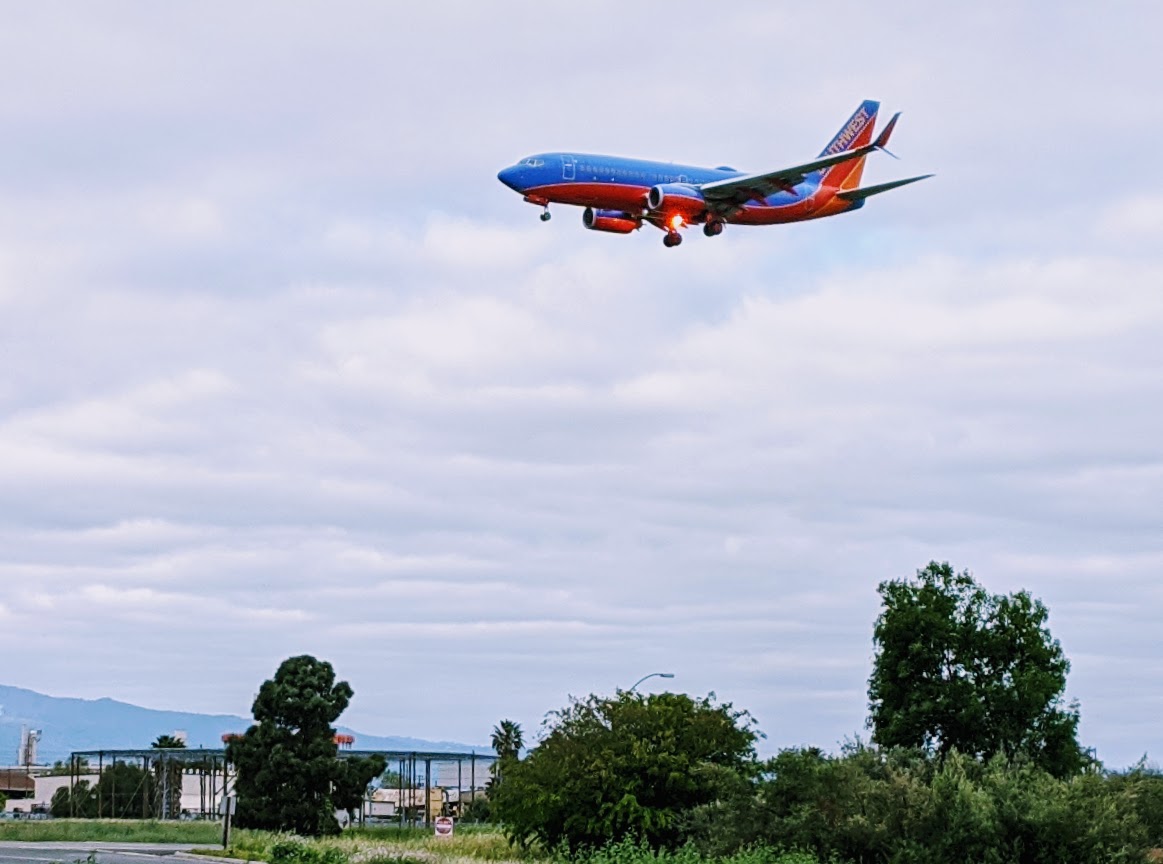 Image Credit: Author - The end customer with the profiler trying to hide behind that tree on the right.

This brings up the second quote to remember. “No plan survives contact with the enemy.” This nugget of wisdom is attributed to a Prussian Field Marshal Helmuth von Moltke the Elder. For sure, Colin Powell used it and most likely Sun Tzu wrote something to that effect in The Art of War. His brilliant summation goes like this: …who wishes to fight must first count the cost.”

Planning and Back Up Planning

Have a plan and have a contingency plan, that’s it in a nutshell. Our contingency plan was the secondary source for the chip but also a parallel effort on another pre-production board. Design by committee is a compromise. A race between two competing teams with the winner decided on the test bench took some risk out of relying so much on simulations. We would design two boards but only one could be used in the prototype. 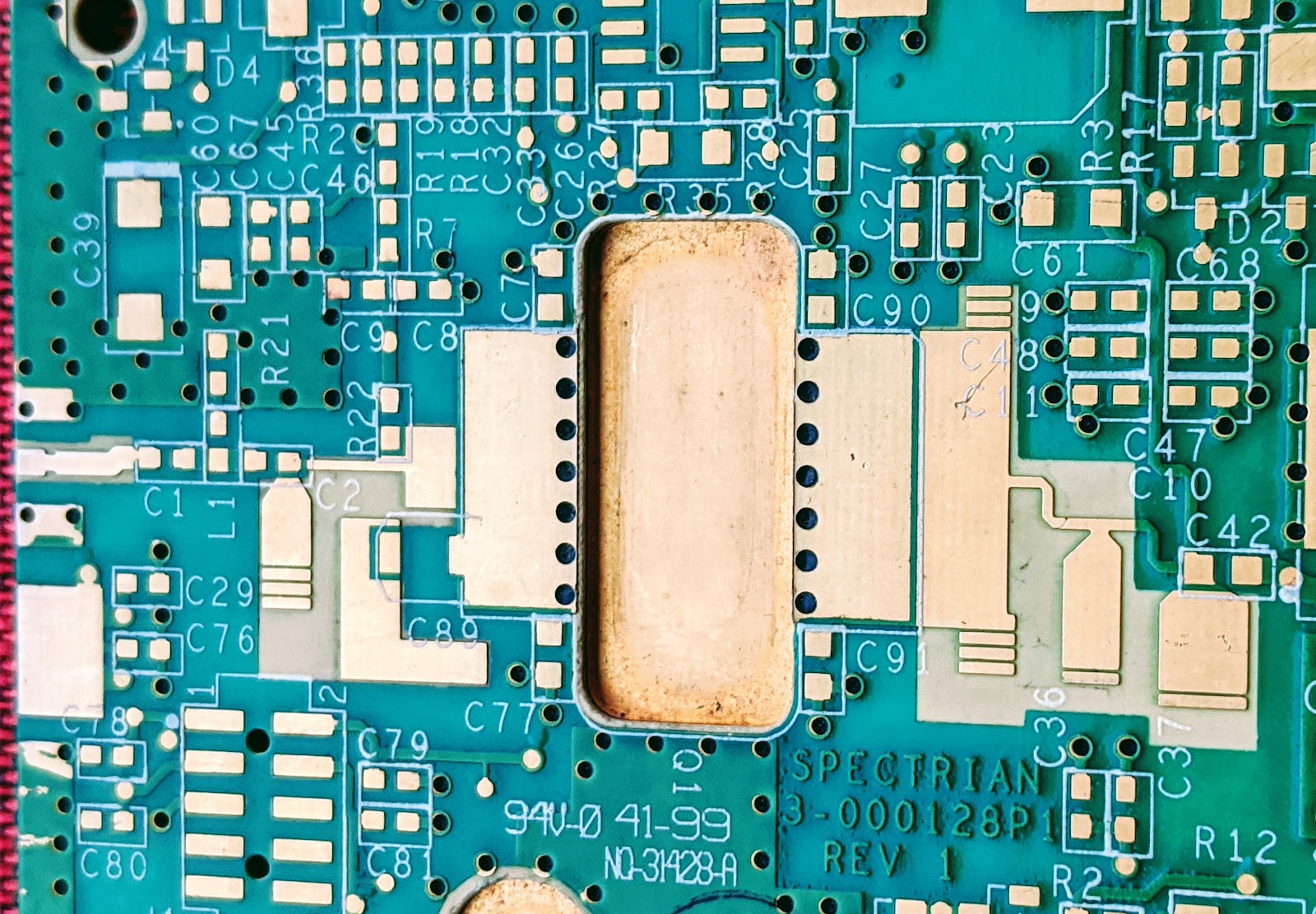 Image Credit: Author - Note the extra rectangles that can be used to alter the board’s performance characteristics. We called them “chicken dots” but they account for uncertainties in manufacturing of boards and chips.

In the world of RF amplifiers, a minor difference can have an oversized impact. You don’t even need to add or change a component. A little blob of solder somewhere along the trace can change the characteristic impedance enough to tune the amplifier. Board bring-up in an RF amplifier factory involves a lot more than turning on the power and looking at the waveforms.

Technicians spend time on each board, some more than others in an effort to produce the maximum power with the minimum of out-of-band harmonics. Some component values will be labelled as “select at test”. When the Tech cannot get the board to pass, the Electrical Engineer rolls up her sleeves and figures things out.

There is a science to this where the Engineer can alter the width of the trace in a particular spot to achieve the desired outcome. More extreme than a lump of solder, the use of tuning stubs is a popular solution. The trick is to get the exact width required. Variations in the chips can be accounted for in this way. It takes planning to decide how to allocate the geometry. Image Credit: Spectrian - Note that the tuning stubs are fully extended by soldering metal tabs to the “chicken dots” The boards pictured here are not for the Wind Profiler but are similar in function.

Houston, We Have a Problem - Enter Manufacturing into the Equation

So, we got our work done and presented our competing boards to the wider group. That’s when the bottom fell out of the plan. Someone from the assembly team noted that the N-connector should have been recessed or otherwise set up in a way that allowed for field service without tearing the unit apart. Easily swappable amplifiers was one of the requirements and our plan wasn’t quite so modular.

They asked Joyce, our Mechanical Engineer how much room she could give them. More would be better. She replied that it would take her “a couple days” to figure out the exact geometry of the approximately 20 x 30 mm slot. She would have to re-engineer the housing while we added a few more corners to the RF path since the boards were going to shrink as a result. More simulations and all of that.

We cannot make space or time, we have to take space which will take time

The Program Manager complained that we didn’t have days to spare. Merril, remember him (?), asked “Do you need the space?” The Manufacturing Engineer said, “Yes”. So Merrill said, “Then it will be a couple days.” He totally had Joyce’s back and that of the rest of his team as well. What a good Manager. We all worked hard to get it done and the squeeze was going to be passed on to the Fabricator, the Assembly line and Test Technicians. We cannot make space or time, we have to take space which will take time. 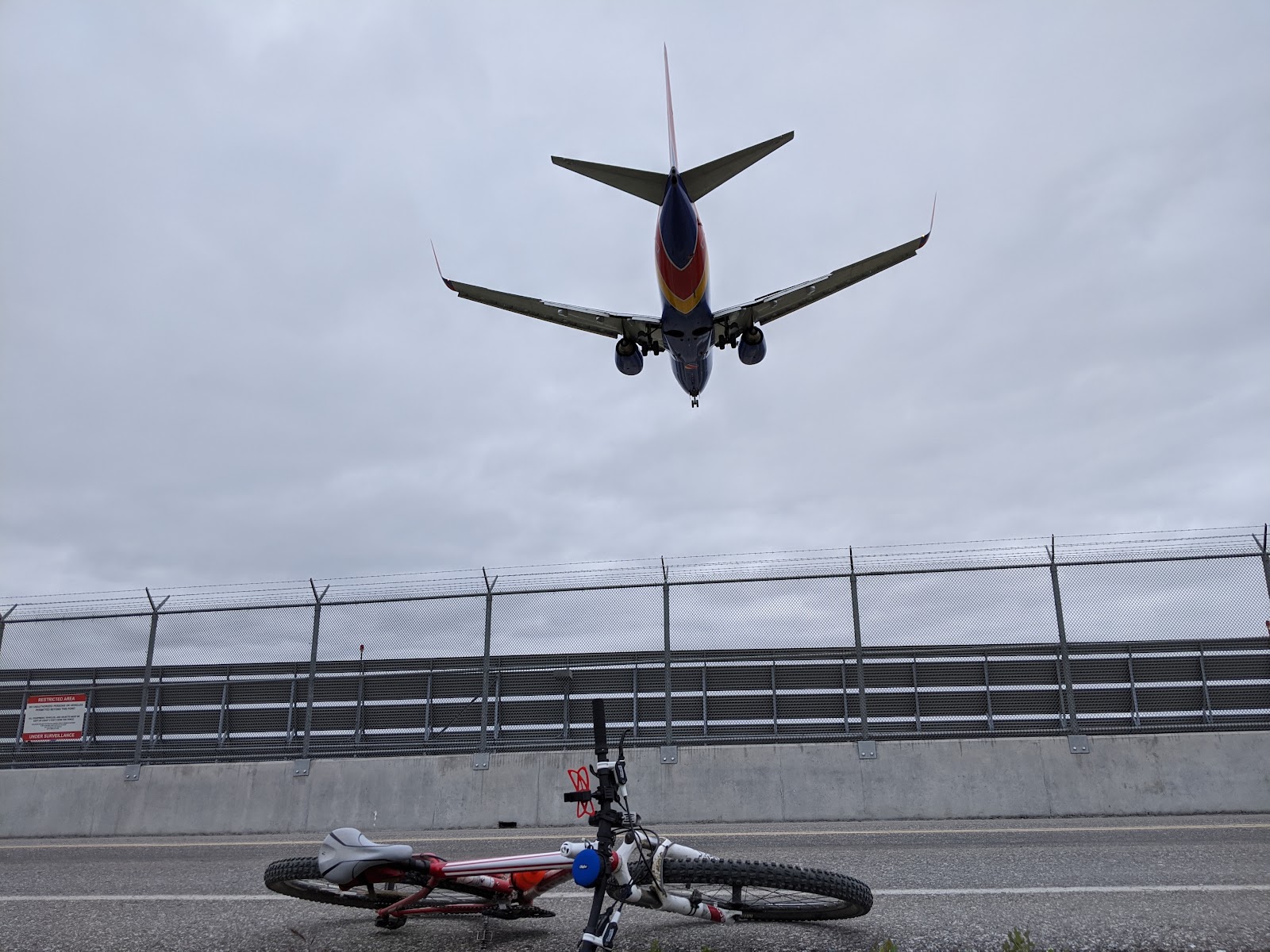 Image Credit: Author - Not all landings can be happy landings.

We had a learning experience. The upshot is that we built that one Wind Profiler and that was it. The test was successful but it was also irrelevant. Another subcontractor stepped into the void and won the socket. The competition is out there and they don’t sleep. We did everything we could except we didn't start with a complete plan. A seven day work-week was not enough to recover.

“We watched our pennies while losing the dollars.”

That fiasco led to a “post mortem”, a term I don’t like. When a giant conglomeration started using that phrase, I suggested the term “lessons learned” but it didn’t stick. I digress. The lesson learned was that we could have rented some network analyzers and hired some temporary technicians or gave our assembly leads a crash course in RF board bring-up to get through the crunch. We watched our pennies while losing the dollars.

There are two possible outcomes in business; a design win or a learning experience. It wasn’t long after that before the Venture Capitalists that funded the company decided that we needed a corporate doctor, a money man to come in and replace the founder as the CEO. It had been seven years since the company founding and the VC’s wanted their money back.

The new guy pivoted the company from Government contracts to building base stations for cellular towers. He also changed the name from Microwave Modules and Devices to Spectrian so people would ask what we did. That gave him an opening to tell our story. As far as funding, he said that we would have an initial public offering or we would “Hit the wall going 100 miles an hour.” No expense was to be spared in order to meet a deadline. We had our IPO the following year.