Being the Manager of a group of people or managing a product development cycle is hard enough when everyone is working in the same location. Spreading them out makes it much more difficult. This issue is a normal part of being in a global organization but these days, it has become everyone’s issue. The waves that are coming across the bow indicate that this arrangement will become more or less permanent even after we get a handle on the pandemic.

It doesn’t have to be a strong headwind to personnel or productivity. Losing the ability to perform management by walking around will be tougher but by no means impossible. Work from home and manage from home are two sides of the same coin. Setting expectations and meeting expectations go hand in hand. Image Credit: Author - As long as you have cellular coverage, you can still manage by walking around.

Thinking back to simpler times under the Qualcomm umbrella, I was exposed to several managers. When a Manager and a Director both left the organization in quick succession, the “three amigos” that made up the ECAD team along with the whole WiFi group found themselves reporting to Jeff Shipee. Jeff was the Vice President responsible for all of Northern California engineering.

He let us know that it was no leg-up for us as individual contributors to be in that spot on the org-chart. He had no time for managing us. His rolled up head-count filled several buildings around the Bay Area and beyond. It wasn’t long before we were introduced to a new Director named Ken Gainey.

Let me stop right here and tell you about a PCB Design. It was a mixed signal board and I was working for two engineers, Jim Proctor and Bernal Arroyo at a company called Spectrian. Jim was the DSP guy and Bernal was the expert on RF. Jim was like me and came to work early in the morning. We got right down to it and put his big ole DSP chip next to the edge connector. Bernal got into the office and saw what we had done. He didn’t much care for that placement. Ha! Image Credit: Author - CAD is a self-contained work space that can go in almost any room.

Fast forward back to Qualcomm, there’s Jim being given a tour of the office by my manager. Of course, we recognized each other and we caught up. He mentioned that his wireless start-up had been acquired by Qualcomm and that he'd be working with us from his location in Florida. Great.

Ok, jumping back to Ken about a year later.  As he was introducing himself, he mentioned that he’d be moving up to the Bay Area from Florida. At that point, I asked him if he knew Jim Proctor. You should have seen the look on his face. He and Jim were the co-founders of the start-up. Me and Ken were instant buddies by association; off to a good start!

Time went on and we needed to fill the Manager position. Qualcomm tapped one of their corporate homebodies, Fernando for the role. The twist was that Fernando was going to stay in San Diego while managing the amigos up in the Bay Area. Aside from racking up frequent flier miles, Fernando also made good use of scheduled emails and occasional calls. My remote manager at Microsoft, (Hi Wayne!) implemented the same policy after the stay-home order hit. Our once-a-week Teams-meeting was augmented with 1:1 time to make up for the lack of office visits. 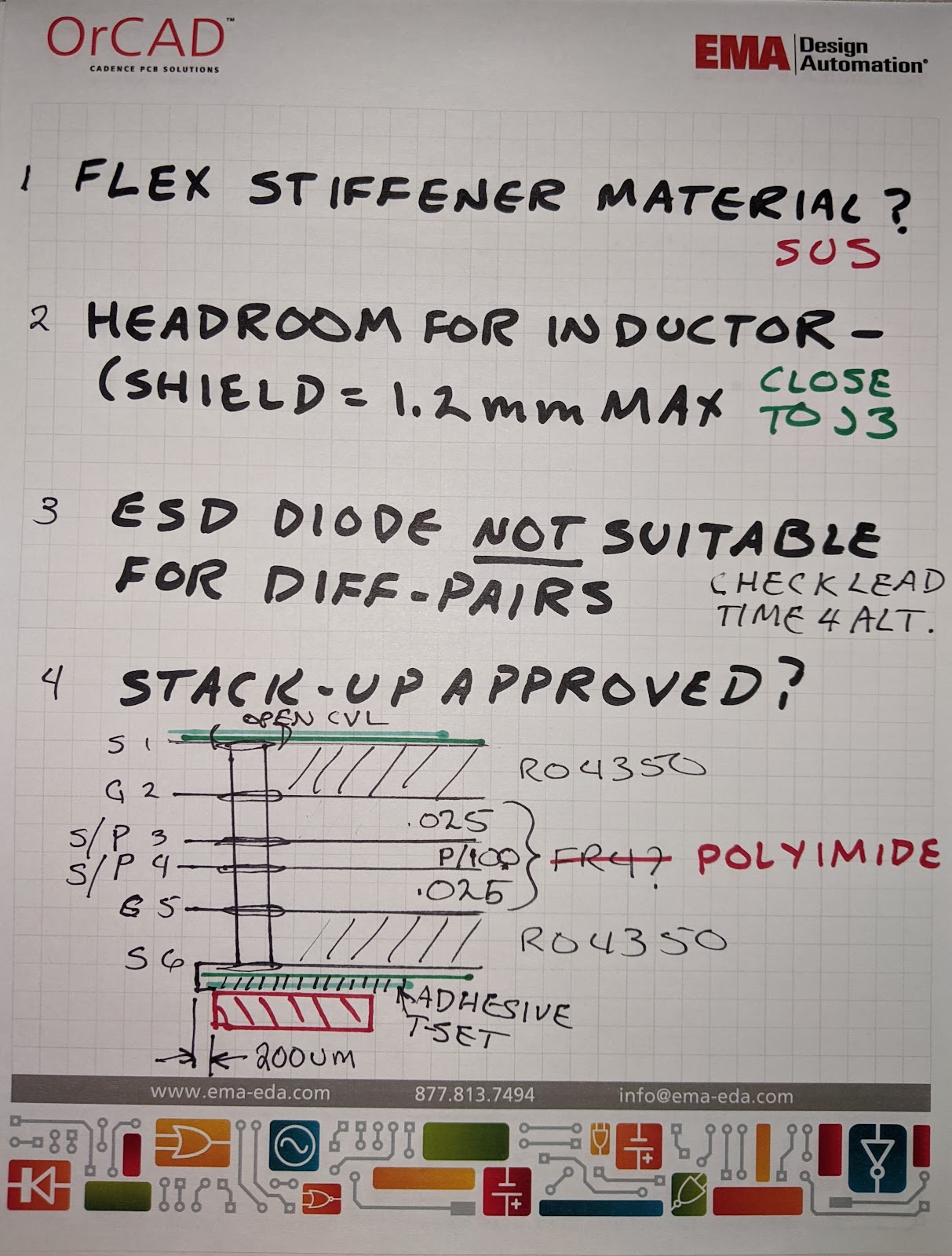 Image Credit: Author - Organize your thoughts in some way so as to have a reminder of what topics need to be covered during limited interaction opportunities.

Having a set time for data-dumps meant that I always wanted to put my best foot forward regarding progress. The more of those milestones I could achieve, the better. There is something different about doing analog boards. It’s not that digital boards don’t see mid-stream improvements. It’s just the way that RF boards are knitted together with many little components.

Analog routing drives the placement and the routing involves lots of carefully placed ground vias along the main signal path. Adding a little shunt or series element might have a larger effect since every trace is constrained to the very minimum of length. While they’re not hard to do, you end up doing them over fairly often. A stub will be more than inelegant; it can break the whole design.

Additionally the various radio chips and their matching networks are almost always packed into an RFI shield. The circuit may change but the shield will not. That’s where the casual phone calls came in. Having a set schedule of touch points between the Manager and Designer plus another open pipeline for the Designer to advise the Boss on any extenuating circumstances allows for the natural flow of information to go on without open loops.

Going too long between touching base can adversely affect the schedule. Meanwhile too much information can be counter-productive. An email should express one key thought or a few that are separated with bullet points. Nobody wants a wall of text. I have a tendency to start reading something down to the point where I have an action item and then I get busy on the task. I might get disrupted by something else before I even get back to the email.

Whether a manager is in charge of staff or driving a product development, they are spread thinner than the individual contributors. Believe it or not, they’re only human. They can forget or overlook things the same as everyone else. Working in the office or the lab helps us remain focussed on the little things.

Working remotely, we should try to use substitutes for the office amenities. We may not have a white board or a meeting room but we can certainly have Post-it notes or some graph paper and our camera. This works both ways. If the effort forms a two way street, we can keep a tight information loop.

A group text thread can be a substitute for informal water-cooler chats. A file-sharing app can stand in for the over-the-shoulder approach to quick status updates. In short, the technology we’ve built out in recent years of social media can rescue our office routines from the perils of social distancing.