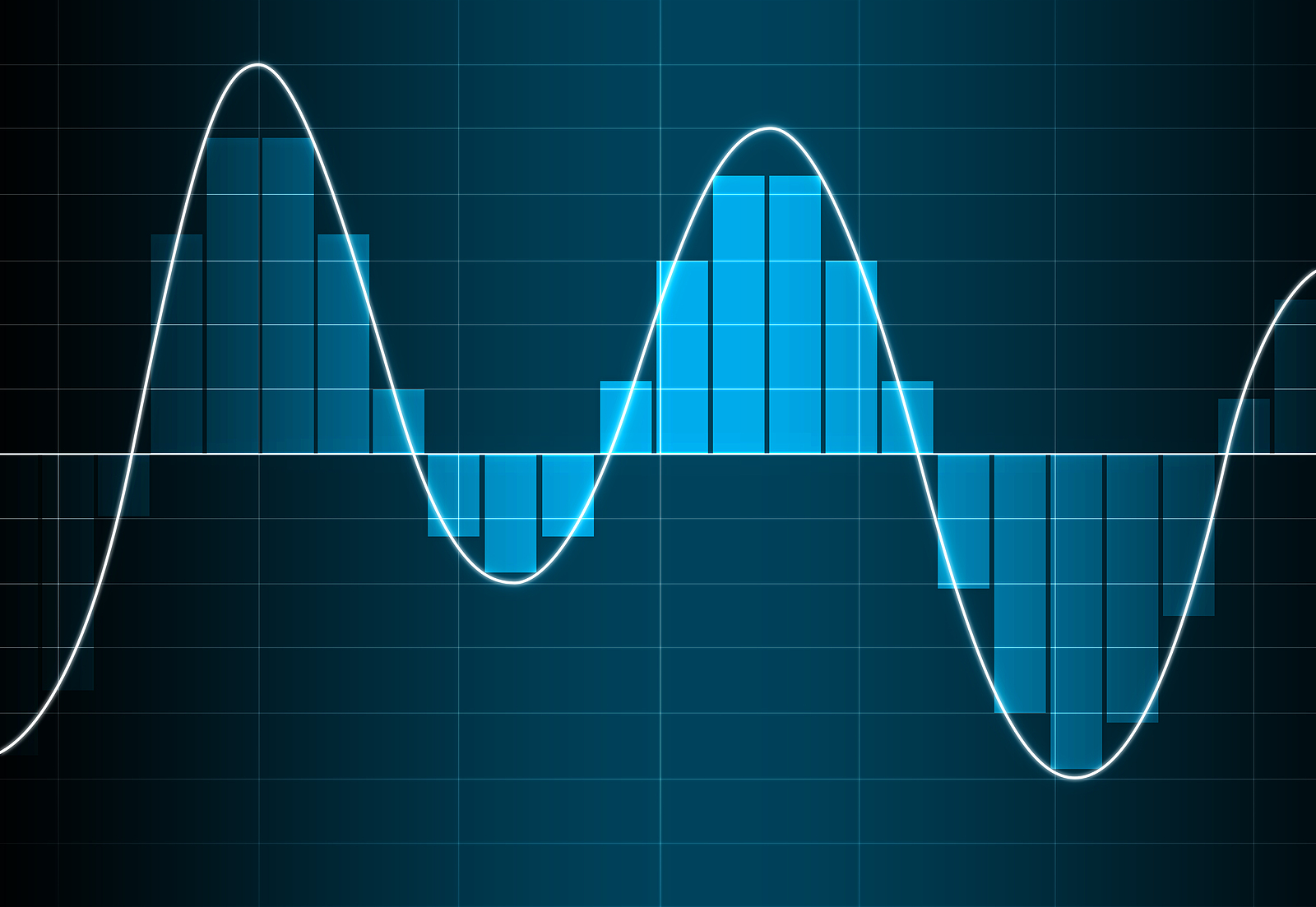 Take a look at any mixed-signal system, and you’ll likely find an ADC/DAC somewhere on the PCB or built into the main processor. ADCs/DACs and their grounding recommendations are sometimes misunderstood, but the grounding strategy for these components is very important for ensuring accurate signal reproduction or synthesis. But there is another aspect of these systems that is sometimes misunderstood: galvanic isolation.

In mixed-signal systems, it is generally advised to not use two separate ground regions with an ADC except in cases of safety or when SNR values in the sensed signal are extremely low. Galvanic isolation is an appropriate strategy to deal with both use cases in ADCs, but how is this implemented in a PCB layout? This article will run over the layout strategies used to implement galvanic isolation with ADCs in a PCB layout.

When applying galvanic isolation to a mixed-signal system with an ADC, the purpose is to measure the signal across the galvanically isolated region in the PCB layout. In other words, you will have two physically disconnected ground nets; the signal being measured will be over one ground region, and the ADC will be in the other region. The challenge here is to transfer the signal across the isolation gap.

Any method that would normally be used to couple a signal across a gap could be used to make a connection to an ADC. Alternatively, in a certain type of component known as an isolated ADC, the ADC can straddle each side of the gap as shown in a section below.

Two of the most common components that are used for coupling signals across a galvanically isolated barrier are optocouplers and transformers. These two components provide different levels of galvanic isolation; typically a transformer will be used at higher voltages because it can significantly step down the voltage before feeding the signal to the ADC on the secondary side. For lower signal levels, an optocoupler might be more appropriate, possibly with some amplification on the output side.

Usage of these two components for coupling across an isolation gap is shown below. In this arrangement, an analog signal is being fed into an ADC, and either the analog or digital signals are coupled across the isolation gap.

Two ways to use an optocoupler to coupler signals across a galvanically isolated gap between two regions in a PCB.

In my opinion, the arrangement on the left is the best way to perform this coupling. The reason is that the analog signal will not experience a phase shift, which is not the case for a transformer. The other reason is that a transformer does not conduct DC, so it only transfers digital pulses during their switching transition, and it will transform the digital signal into a pulse stream. Only the left arrangement should be used with a transformer.

The other advantage of these methods is that they can be used to step down the signal level on the secondary side. Either a step-down transformer is used, or the secondary voltage on the optocoupler is lower than the signal level on the input side. This is how you would implement an ADC for measurement in systems running at high power, such as precision measurement of AC voltage in a power system.

If you are working in a system that requires galvanic isolation, such as you might have when an analog portion of a system is operating at high voltages, you still need to ensure galvanic isolation. Rather than implement isolation with an optocoupler or transformer, there are isolated ADCs that can be used to collect signals and convert them to digital representations. These components function similar to an isolated switching regulator IC: their inputs and outputs are isolated from each other, and there is an internal coupling mechanism that allows the input and output sides to have different ground nets.

An example isolated ADC block diagram is shown below. In this block diagram, the SPI bus on the digital side must be totally isolated from the analog input channels on the analog side. In other words, AGND and DGND are connected to different ground regions (ideally both regions are large copper pours). No signals must be routed across the gap between AGND and DGND. 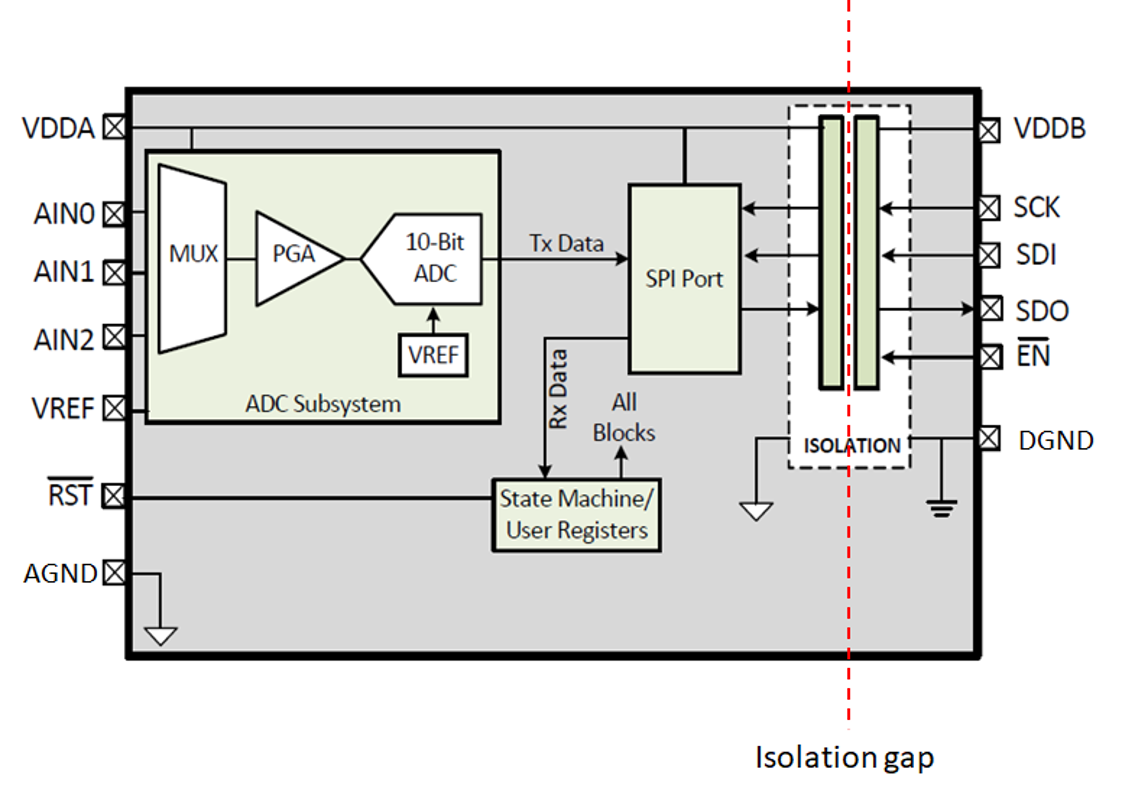 When choosing an isolated ADC, one of the main factors to consider in terms of safety is the capacitance across the isolation gap, and the breakdown voltage across the gap. The former will limit the maximum frequency that can be isolated across the input and output, and the latter will determine the level of high-voltage safety that the component can provide.

So far we discussed ADCs, but the same strategies could be used with DACs. There are also isolated DACs available from major semiconductor manufacturers that are suitable for data acquisition and synthesis applications, as well as power electronics systems. These components are important elements of safety and noise control that follow the same grounding requirements as in galvanically isolated mixed-signal systems.

It’s important to note that, in practical cases, the low-noise use case for DACs will not exist, and the only reason for needing isolation will be for some element of safety. The analog signal produced by the DAC will be anchored to the reference voltage level of the system’s oscillator unless it is intentionally dropped to a very low level. This is one reason why there are very few isolated DAC components available, and the isolation issue is more commonly seen in ADCs.

When you need to design a galvanic isolation strategy into your mixed-signal system, use the complete set of PCB design tools in OrCAD from Cadence. OrCAD includes the industry’s best PCB design and analysis software, complete with a set of schematic capture features, mixed-signal simulations in PSpice, and powerful CAD features, and much more.