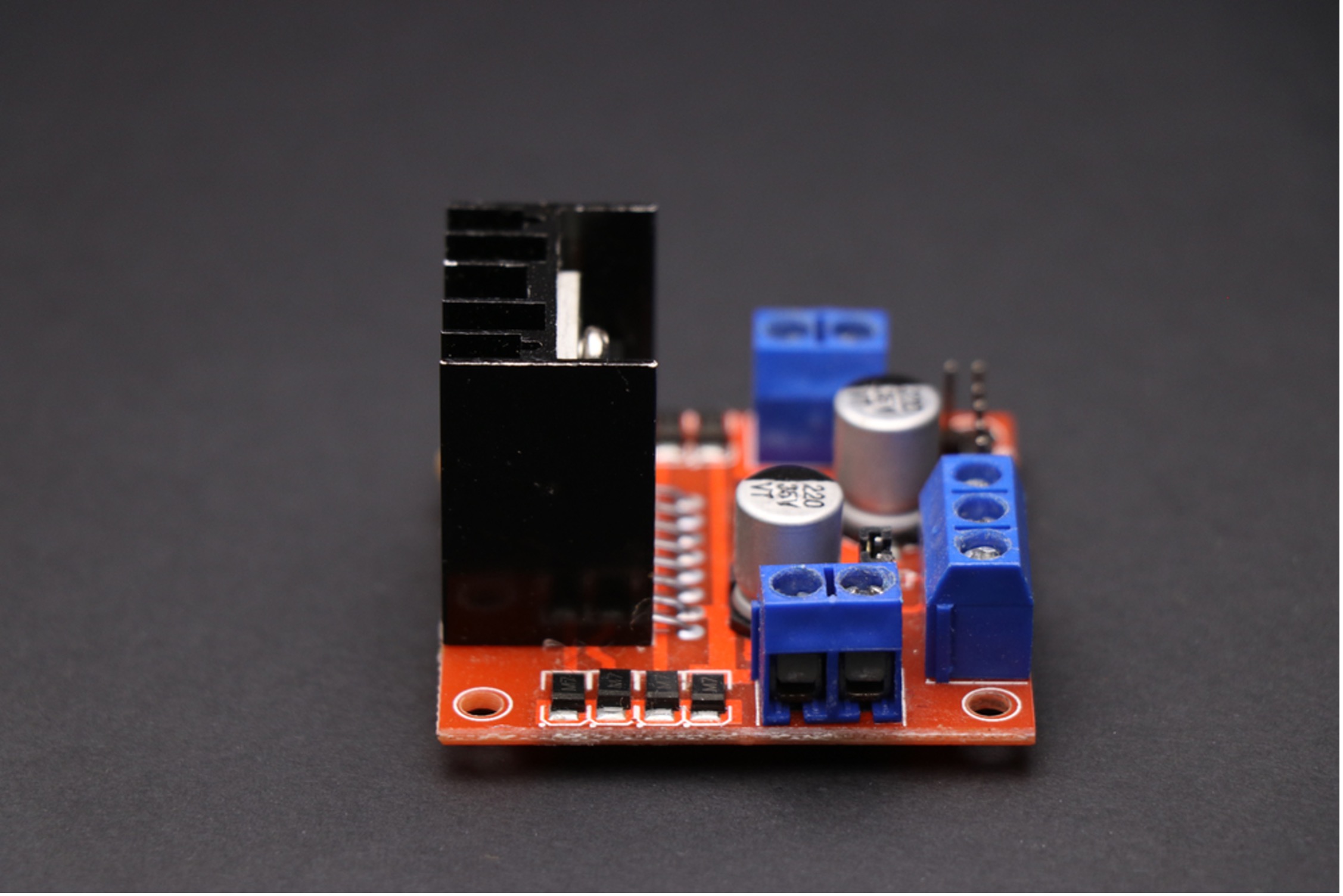 DC motor drive circuits can be packaged in small modules like the board pictured here.

Motor drives, as the name suggests, are used to drive motors and control their speed, as well as direction of rotation. Motor driver ICs are basic current amplifiers that are responsible for delivering the required power to a motor. However, the term “motor drive” could also collectively refer to an overall system that is designed to control the motion of various motors. These systems could also be built from discrete components, particularly when higher powers are needed.

Motor drive circuits and systems integrate multiple components into a single package or assembly. At the highest level, motor drives include the set of functional blocks shown in the diagram below. 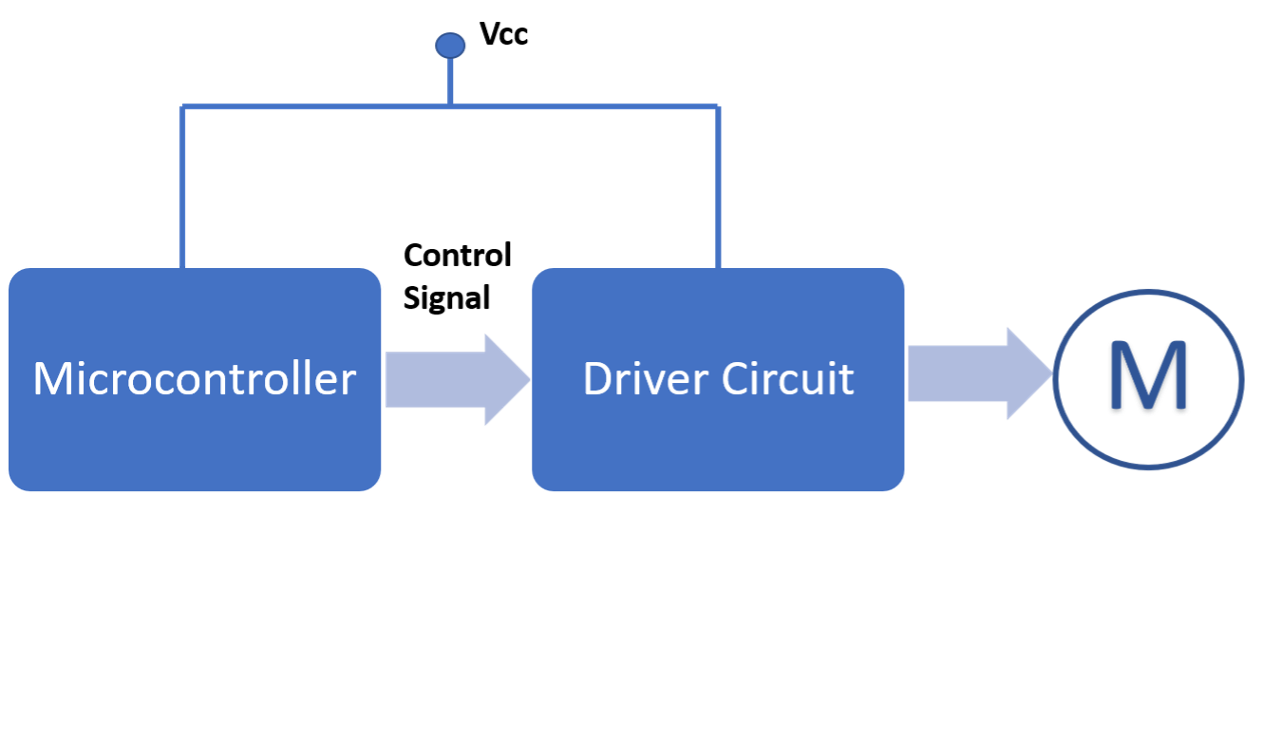 The most common DC motor drive circuit topology is an H-bridge circuit. This circuit is shown below, and its H-shaped topology gives it its name. DC motors can be operated in both clockwise and counter-clockwise directions using an H-bridge by controlling the directions of the driving currents in each of the MOSFETs in the circuit. 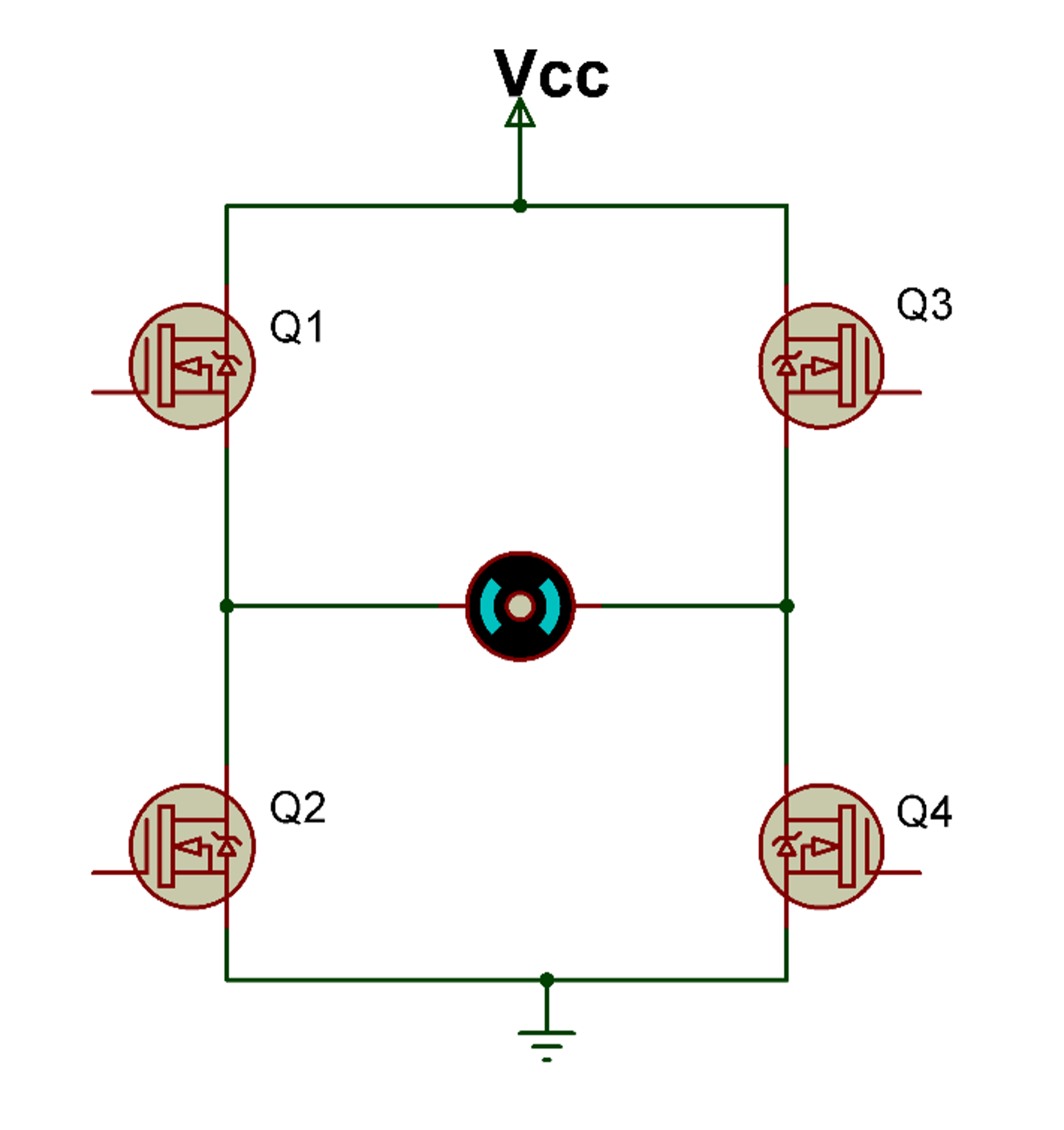 MOSFETs are the most common components used to implement an H-bridge design. Turning Q1 and Q4 ON causes the motor to run in one direction while closing Q2 and Q3 causes the motor to move in the opposite direction. The same driver circuit can be operated with pulse width modulation (PWM), which allows the speed to be dynamically controlled during operation.

H-Bridge drive circuitry consists of the electronic components that connect the PWM or similar digital control inputs to the MOSFET gates. It serves two primary functions:

In addition, several driving circuits have other features such as:

The common driver controller circuits are summarized in the table and image below. It is worth mentioning at this point that all MOSFETs used on the low side are N-channel, but both P-channel and N-channel devices can be used on the high side. 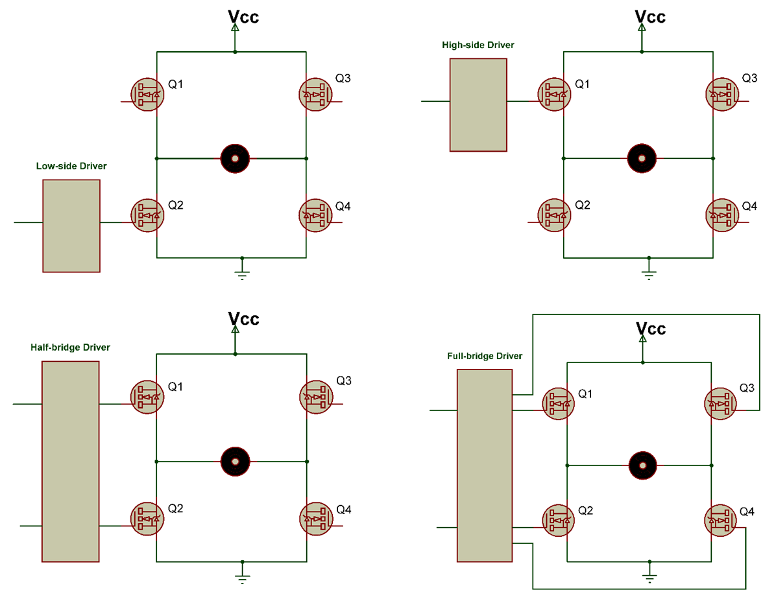 While the process of designing motor drivers based on an H-bridge may seem easy at first glance, it is not without its difficulties. These may occur during either the circuit design phase or the firmware development phase. In an H-bridge circuit, the FETs turn ON and OFF in a diagonal pattern, but this switching cannot happen simultaneously among all FETs.

Dead Time: There will always be a point in time when all transistors will be open. If the top and lower switches are both turned on, there will be a momentary loss of voltage and power, or possibly a short. Dead time can be implemented to prevent this from happening. This is the brief time during which all FETs in the H-bridge are ON. Dead time allows the programmer to delay the opening of the topmost switch until the bottommost one has been closed.

PWM Frequency: Another crucial element that has to be set correctly when designing a motor driver is the PWM frequency. More power will be lost at lower frequencies and vice versa. If the PWM frequency is too high, however, the microcontroller may struggle to provide the necessary PWM signal at the required bias. Furthermore, the gate driver and transistor switches may fail due to incompatibility with a very high frequency. The proper PWM frequency must be set up in the firmware in order to guarantee the motor controller's proper functioning.

EMI: Finally, extreme EMI is also an issue that may arise with certain types of motors, such as brushed DC motors. This is caused by frequent switching of the commutator, and this can inject noise into nearby components. In extreme cases, conducted currents can damage nearby components. Filters and ferrites are often used to shield cables that could pick up this EMI, particularly at lower frequencies where most of the power will be concentrated.

MOSFETs should have some important specifications if they are to be used in motor drive circuits:

To increase the current handling capabilities of MOSFETs used in motor drive circuits, these components will often be placed in series.

The lead inductance and PCB layout are both important for determining the total inductance on the drive path. During startup, excessive inductance can lead to an underdamped oscillation in the drive circuit that can damage or destroy the MOSFETs. As a result, some transient voltage protection is needed on the MOSFETs. This can be as simple as a TVS diode and a small resistor in series with the gate, and a fast recovery diode should be placed across the motor.

When you’re ready to design and simulate your DC motor drive circuits, make sure you use the industry’s best circuit design and simulation tools in PSpice from Cadence. PSpice users can access a powerful SPICE simulator as well as specialty design capabilities like model creation, graphing and analysis tools, and much more.