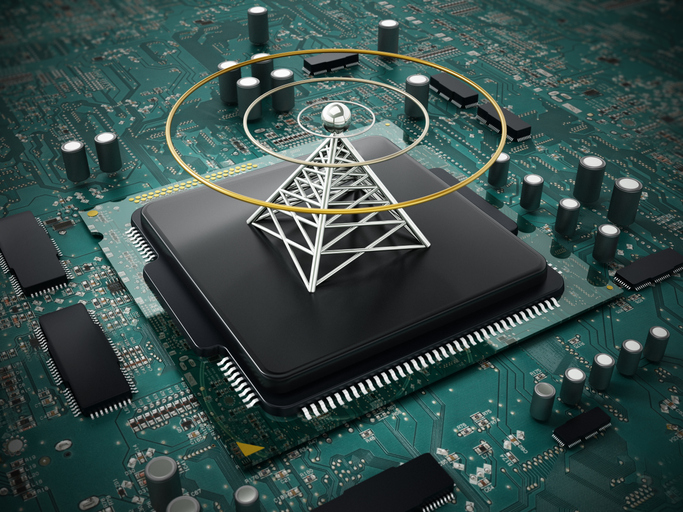 There are many antennas available as off-the-shelf components, and engineers can use there in many systems requiring some kind of wireless communication. The antennas used in PCBs can also be printed, allowing for totally custom designs and unique architectures that are accessible in a single assembly. Then there are PCB-mounted antennas like chip antennas and SoC modules with an integrated radio, which could also require an antenna module or off-the-shelf component.

No matter if your antenna is placed as a printed element or pulled off the shelf, it’s important for PCB designers to know how antennas work at a deep level. The astute designer will soon notice that a PCB contains many elements that can act like efficient antennas. In this article, we’ll present some of the main concepts behind antennas so that engineers can see how to design, select, and place antennas.

Antennas perform two basic functions: they emit electromagnetic waves when provided with a voltage and current, and they receive electromagnetic waves and convert them into a voltage and current. The interconnect that leads to the antenna will need to pass a signal into the antenna or accept a signal from the antenna. These elements are inherently operating in the wave propagation regime (as we will see below), so impedance matching must be enforced.

Antennas can be designed to pick up an electric field or magnetic field, depending on its geometry. The simplest antennas are a single wire of specific length, the size of which will be discussed below. Magnetic antennas use a loop of wire, and the transmitter/receiver element in the system acts like a load that completes a circuit that contains the loop antenna.

The two images above provide a comparison of loop and pole antennas. The pole antenna receives a current from a driver and acts like an open transmission line. After reflection of the far end of the antenna, superposition causes a current wave to form along the antenna. This changing current emits a changing magnetic field; the time-changing magnetic field then generates a changing electric field, and you now have a traveling wavefront emitted from the antenna!

Physical Design of an Antenna

The goal of an antenna designer, both on a PCB or when integrated as an external component, is to define the geometry of the antenna so that some particular operating goals are met:

The physical design of an antenna and its placement in a PCB will determine all of the above operating characteristics.

Antennas generally exploit some wave resonances within the antenna structure to create a strong voltage and current oscillation. This would then give you strong electric and magnetic field generation around the antenna, and the cross product between these would give you strong power emission. So, the problem of antenna design is one of determining the eigenfunctions (resonances) in the antenna structure that will then give strong emission of electromagnetic radiation. 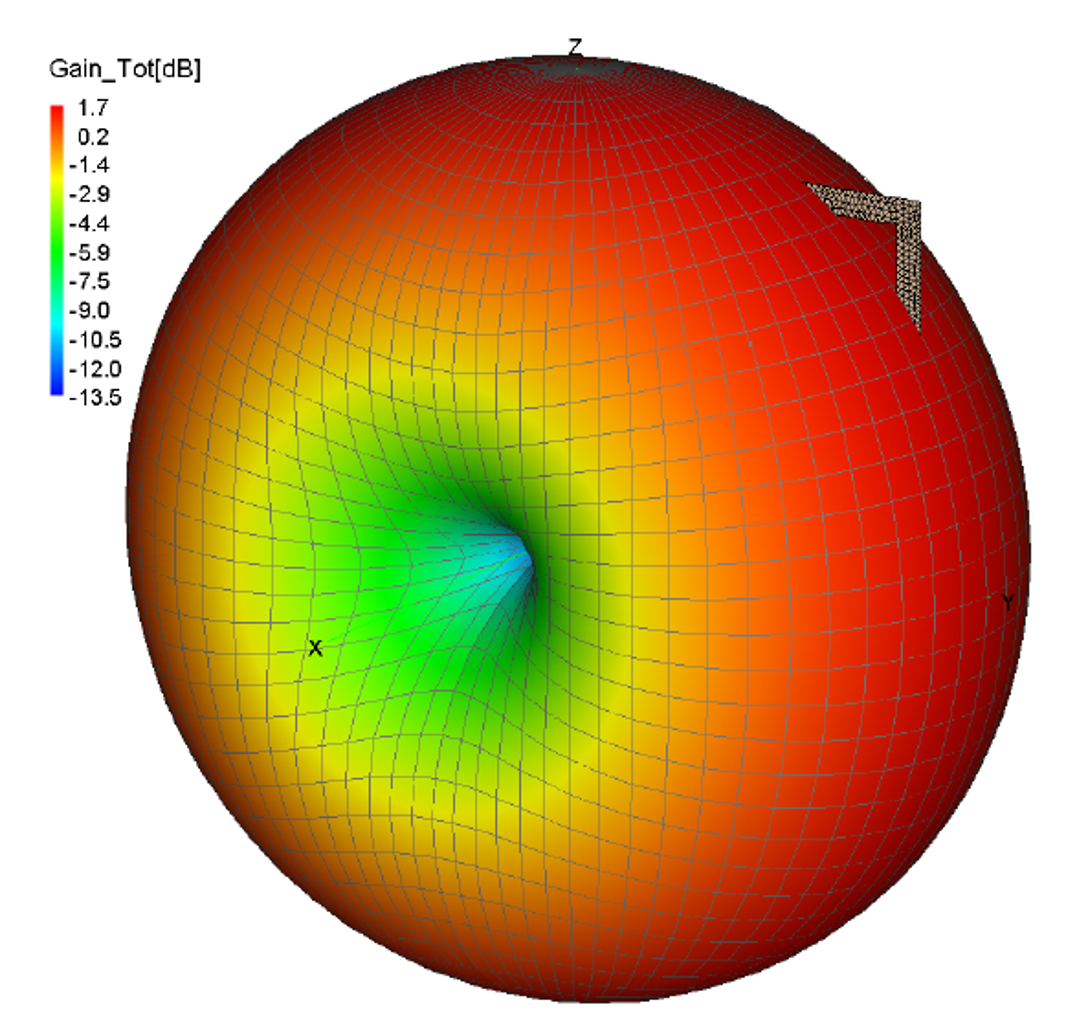 Once the electromagnetic field around the antenna is determined, software can be used to determine the radiation pattern and radiation efficiency. Field solvers for antennas will generally operate in the frequency domain, so these values can be plotted as a function of frequency. This then lets a designer determine the antenna’s emission bandwidth.

The other important aspect to determine for an antenna is the input impedance. Note that antennas can have a reactive component on their input impedance. The impedance will determine how to design a matching network for the antenna, as well as the feedline design used to transfer maximum signal into the antenna.

The feedline needs to be designed such that the return loss along the feedline is minimized at the antenna’s input port. The feedline and matching network design can limit the bandwidth if not implemented correctly, so the designer needs to select the appropriate matching method for their particular antenna. The table below outlines some possible antenna impedance matching methods and when they can be used.

The fact that the transmission line section impedance matching provides high Q matching means that the design can only provide high gain and radiation efficiency at specific wavelengths with maybe 5% bandwidth, depending on the amount of loss in the system. When broad bandwidth is needed for a reactive or resistive antenna, LC filter matching should be used.

Do All Antennas Need a Ground Plane? 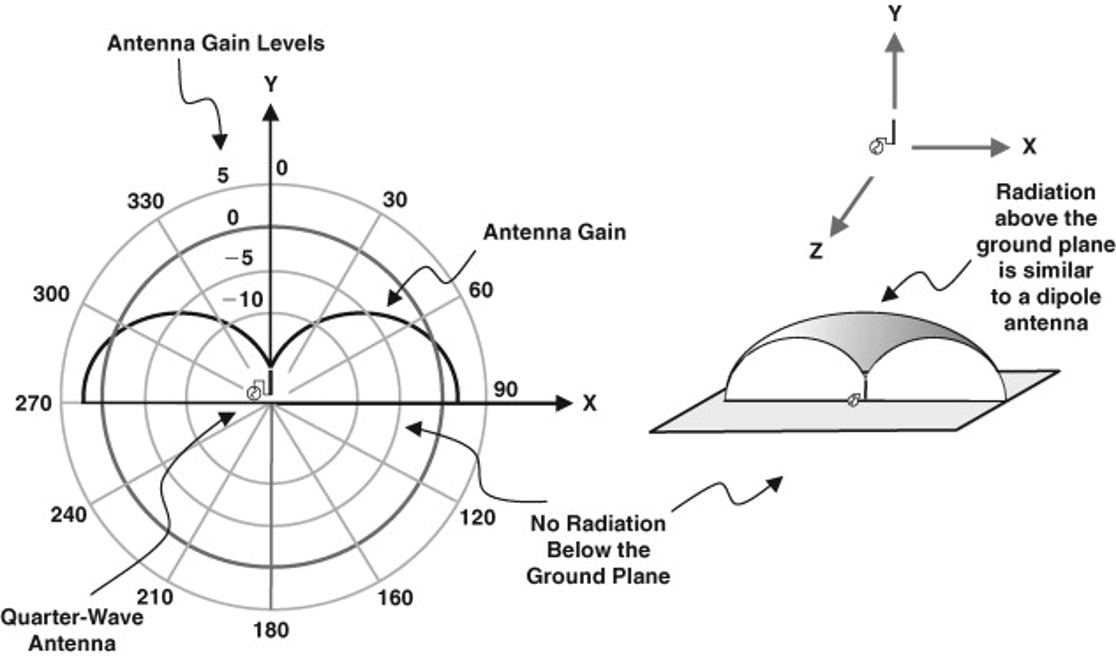 This means that, under the appropriate coordinate system transformation or conformal mapping, an antenna with a ground plane could be re-defined as an equivalent dipole or higher order antenna only emitting into a half-plane. In fact, the multipole expansion technique is used in electromagnetics to approximate arbitrary systems of charges and currents as dipoles, tripoles, quadrapoles, etc.; the same idea applies to antennas.

To see why this is the case, think about how a dipole antenna works in vacuum as shown below. The driver’s equivalent function is to provide a differential-mode current; what is actually happening is the driven side induces its differential-mode return current in the opposite polarity side. This charge distribution across the two legs of the dipole antenna is shown below. The two sides emit together to produce the donut-shaped emission pattern typically seen in dipole antennas.

Voltage and current distribution in a half-wavelength dipole antenna.

When an antenna is placed over a ground plane, the ground plane essentially acts like the negative side of a dipole antenna by providing a location where the electric field can terminate as defined in the standard electric field boundary conditions at conductors. The GND plane causes the emission to be directed into the half-plane above the plane, and it sets the input impedance of the antenna to a specific value that can be matched to the system’s analog front end.

The image below from Wikipedia shows the correspondence between the two situations. The electromagnetic radiation emitted from an antenna above the ground plane reflects off of the ground plane due to the wave impedance discontinuity seen at the ground plane. If we insert an image antenna in the conductor, we can see that the superposition of the emission from the antenna and its image produces the same field at observation point P. 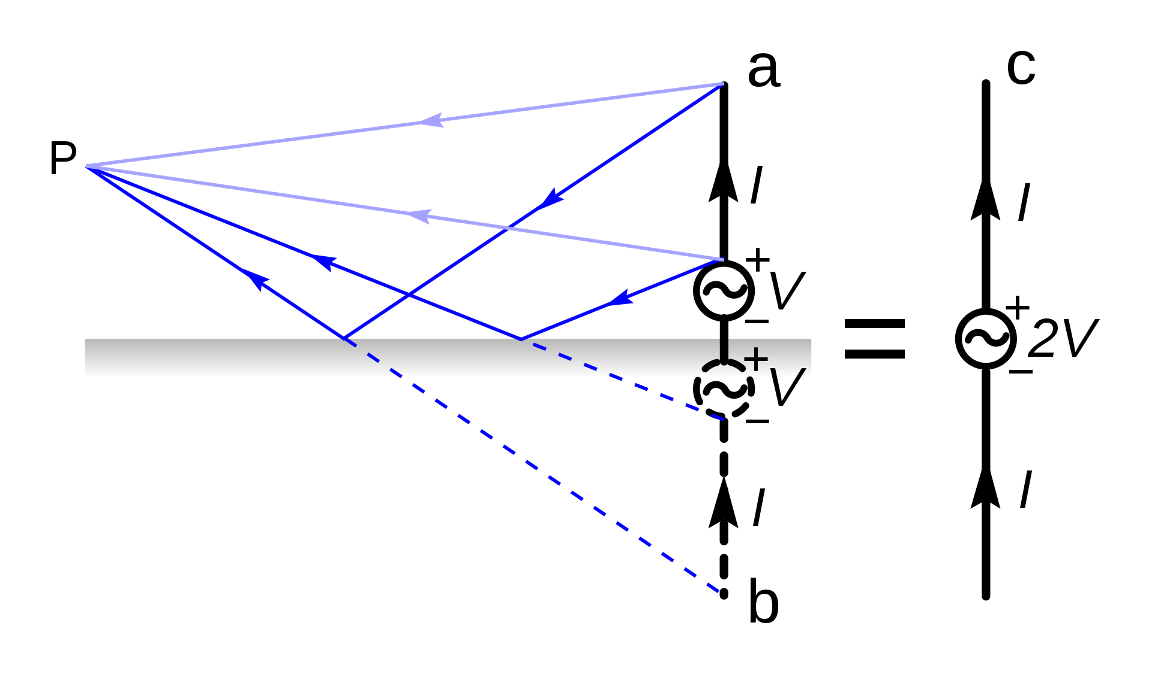 The job of the analog front-end is to form the signal and ensure it transmits between the antenna and the transceiver. In some smaller systems like IoT products, the central processor (MCU) will often have the front-end built into it. The designer will only need to place an impedance matching network and feedline into the antenna. In higher-power systems that do not use an off-the-shelf processor, the analog front-end may be built from discrete components.

In the typical approach to antenna design, a designer will often look at a single frequency (the carrier frequency) when designing antennas, feedlines, and matching networks. However, it’s important to think about the signal bandwidth when designing antennas and channels for these systems. As we discussed above, the feedline and impedance matching sections could limit the bandwidth of the antenna’s reception and emission. The front-end of the system needs to operate within this bandwidth range to ensure reception and emission of electromagnetic energy.

No matter what type of antenna you need to design, make sure you use Allegro PCB Designer, the industry’s best PCB design and analysis software from Cadence. Allegro users can access a complete set of schematic capture features, mixed-signal simulations in PSpice, and powerful CAD features, and much more. The built-in signal integrity tools can help users build and place their antennas within their assemblies and evaluate feedline designs.