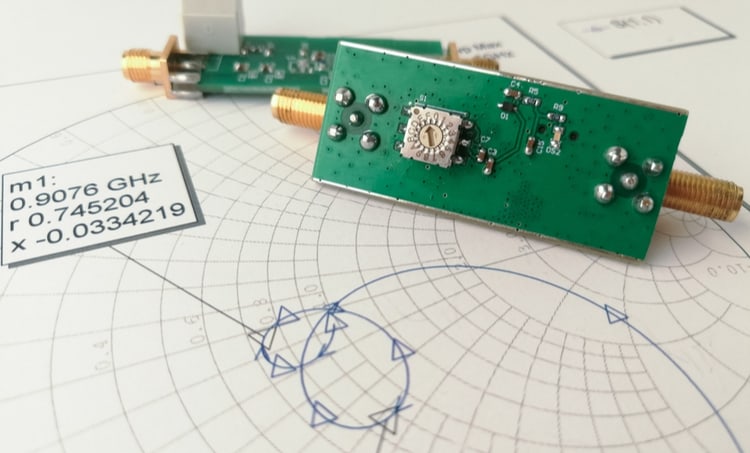 Which one is first?

So, how can one compare impedance vs. resistance? Resistance is the primary quantity students first learn about in their introductory engineering classes. Resistance measures the opposition of electricity flow in a circuit or component and is measured in Ohms (Ω). You will find that resistance is applicable for both AC and DC circuits; its role is to dissipate electrical energy and, in this way, it will limit the current in a circuit to some specific value. In its simplest form, the resistance of a material is given by the following equation:

Here, ρ is the resistivity, L is the length along which current will travel, and A is the cross-sectional area of the material.

Impedance describes the ability of a circuit to oppose AC electricity. Impedance is made up of two components: resistance and reactance. In basic AC analysis, resistance defines a circuit’s power dissipation while reactance defines how the electric and magnetic fields react to each other as an AC signal oscillates, thus reactance is a function of frequency. Inductors and capacitors are the basic components that are used to introduce reactance, but conductors on a PCB will have some reactance as well.

Definition of impedance in terms of resistance (R) and reactance (X)

Impedance is written with the symbol Z and is measured in units of Ohms (Ω). It is a complex number, with resistance being the real component and reactance being the imaginary component. Impedance can also be expressed as a ratio of voltage to current using Ohm’s Law:

If you’re familiar with complex numbers, then you’ll know that the impedance will have a magnitude and a phase. Physically, the phase of the impedance defines the phase difference between the voltage and current. This should illustrate the dual role of impedance: to change the magnitude of the current for a given voltage as well as to create a phase difference between current and voltage.

In a PCB, the impedance of electronic components is used in multiple circuits, such as in tasks like impedance matching, filter design, ESD protection, and suppressing transient ringing. However, the impedance of the layout itself will also be affected by the arrangement of conductors in the PCB layout and the materials used to build the board.

Resistance and Impedance in a PCB Layout

Since all components and conductive elements in a PCB layout will have some resistance and reactance, there are certain situations where a designer will need to anticipate these and account for them when creating the design.

The PCB layout design process can be broadly divided into the following activities:

Among these sets of tasks, the impedance will be affected by material selection and the results will be used in routing. This principally arises in two types of designs: switching power systems and high-speed/high-frequency designs. In power systems and high-speed systems, component placement will also create parasitics in the PCB layout, which will create undesired signal behavior because parasitics modify the impedance of a circuit or components from their target values. In addition, resistance is also important in high-power DC systems, as these systems will experience power loss due to resistance of the conductors, which is also undesirable.

In these types of designs, interconnects are designed to a required impedance value because signal behavior will be affected by the inductance and capacitance of traces in the PCB layout. However, traces for these systems do have some resistance, but it becomes negligible in mid-range frequencies, as the trace resistance will be much less than 1 Ohm.

Since the goal of trace design in a PCB is generally to get close to an impedance target, designers will need to use some equation to calculate the impedance of a trace or a transmission line impedance calculator to properly size a trace in a PCB layout. If the trace will not be used to route high-speed or RF signals, then we worry less about this and focus more on the size of the trace needed to easily route around a board and make connections to components.

In power systems, we would like to deliver power to a component or another system without excessive noise. We also want to make sure that, in the PCB that holds components for a power system, there is minimal power loss and that the system can deliver the required power level efficiently. Another aspect of power systems is their noise coupling; the system should transfer minimal amounts of noise between different portions of the system. The last point is particularly important and potentially problematic in switching regulators.

In general, impedance and resistance affect two aspects of power delivery (DC and AC operation) differently, as summarized below.

The need to minimize resistive losses is the motivation for using power rails and/or power planes to deliver DC power at high current. For AC power delivery, using planes increases total PDN capacitance up to high frequencies and reduces inductance in the PDN, both of which keep impedance low up to the high frequencies required for AC power delivery in high-speed digital systems.

Regardless of how you’re juggling impedance vs. resistance in PCB design, the best option is to utilize the industry’s most comprehensive PCB Design and Analysis platform. With Cadence’s Allegro PCB Designer, you have all the functionality needed to design boards to any degree of complexity while simultaneously evaluating design quality aspects such as DFM. Additionally, dedicated tools for performing PDN and thermal simulations are integrated for easy incorporation into your design package.