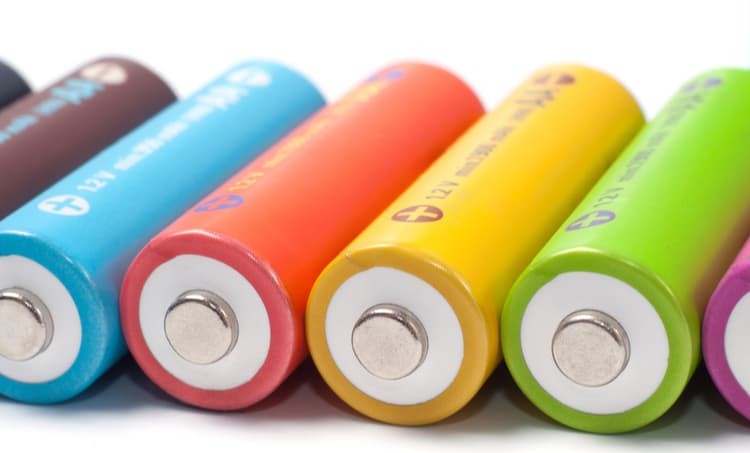 Electrochemistry is all around us and it’s responsible for many of the things that make modern life possible. Whether you’re designing batteries, charging systems, monitoring systems, or just a potentiostat, you should know what the half-wave potential is and why it is important. In fact, the half-wave potential will tell you some important information about your electrochemical reaction, especially in complex reactions involving multiple reactants and products.

If you need to use cyclic voltammetry for design and analysis, the half-wave potential is just one of many things to examine in a cyclic voltammetry sweep. When automating monitoring or measurement activities, or when you’re designing a testing system, pay attention to the nature of the reaction so that your system can get the most accurate measurements. Here’s what you need to know about the half-wave potential and how to design your electrochemical system for measurement and testing.

What is Half-Wave Potential? 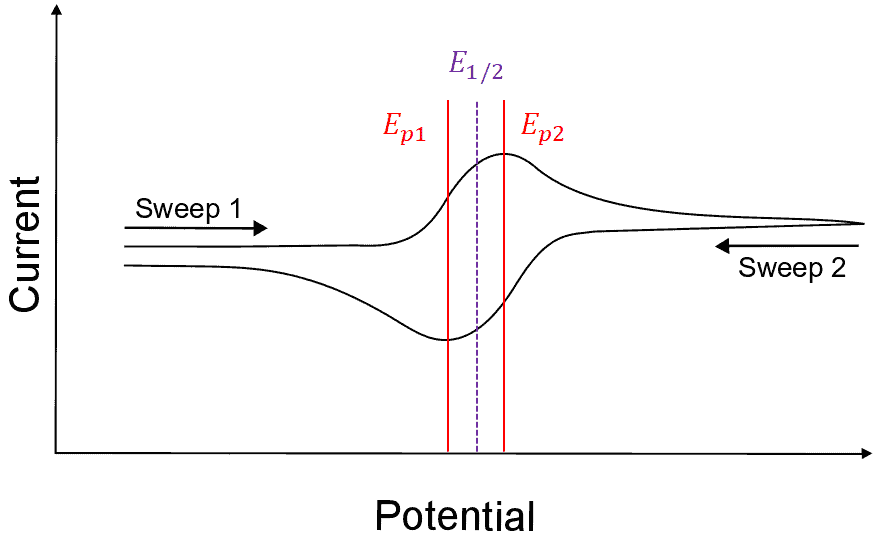 The image above is shown using the US convention, i.e., Ep1 corresponds to oxidation at the anode and Ep2 corresponds to reduction at the cathode. When the applied potential is equal to the half-wave potential, the total current is equal to one-half the diffusion current in the solution. The above potential values on the x-axis are measured with respect to some reference. Textbooks most commonly quote these values with respect to a standard calomel electrode (SCE), although Ag/AgCl or standard hydrogen electrodes (SHE) are also used as references.

There are many textbooks that contain lists of half-wave potentials for various reactions. These reactions are normally specified under particular conditions. In general, the half-wave potential and the current are affected by the following factors in an electrochemical cell:

Because of these factors, half-wave potential measurements in electrochemical cells can be used to determine specific analyte concentrations, reaction rates, and valence states by comparing the measurements with some well-known reference. It’s important to understand exactly what is being measured in these applications as part of designing an electrochemical system.

When monitoring an electrochemical cell, the relevant quantity to be measured is the total current flowing in the cell. This imposes some particular design requirements for these systems:

In this type of modern electrochemical measurement system, everything can be controlled with the microcontroller, which could also interface with a keypad or touch screen for displaying data. These systems can also be designed to connect to a computer through a GPIB connection, where data can be displayed on a graph in real-time. The main task of this system is to collect a current measurement, which can be done with an op-amp circuit.

The block diagram below shows the measurement setup used to collect current from the electrochemical cell. This simple circuit uses a basic op-amp and BJT, and it can be used in a standard 3-electrode cell. 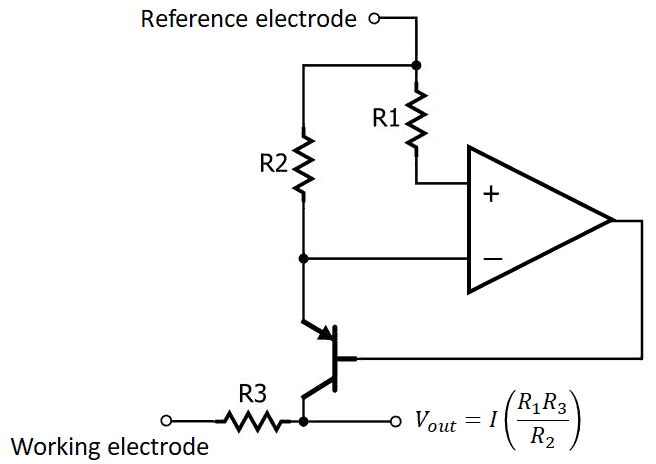 Current measurement circuit for an electrochemical cell in cyclic voltammetry

This amplification stage will accept current from the cell and output a voltage that can be read with an ADC. The above circuit could be improved by adding additional filtration on the electrode terminals.

Before you complete your PCB layout for your monitoring or measurement system, it helps to build out standard circuit models for electrochemical cells and use these in a circuit simulator. The goal in using a circuit simulator during design is to assess signal behavior and the potential/current measurements one would expect to see in the cell. In addition, you can see the real current that would reach your measurement amplifier input, which will help you optimize your amplifier stage for accurate cell impedance measurements.

When you’re designing a system to measure the half-wave potential of an electrochemical cell, you’ll need the best PCB design and analysis software to support your electronics. The Allegro PCB Designer application from Cadence includes a complete set of PCB design and layout features that integrate with simulation and modeling tools. You’ll have a complete set of design features for building and optimizing your next electrochemical system.