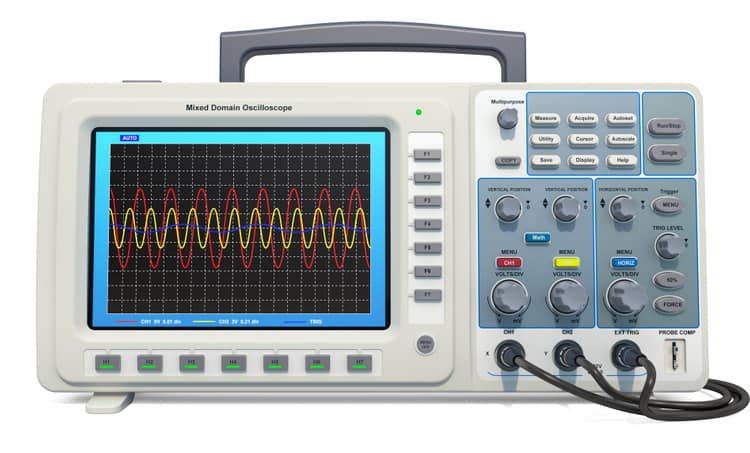 You can simulate the same waveform you might measure with an oscilloscope using nodal analysis in the frequency domain.

Among the various ways to analyze circuits by hand, nodal analysis gives you a simple way to examine the current and voltage distribution in DC circuits. It also works well for simpler AC circuits driven with harmonic sources. However, once we look at broadband sources and general impedance functions, can we still work in the time domain?

As it turns out, it’s much easier to set up problems involving general impedances and broadband voltage/current sources in the frequency domain. By constructing a matrix equation from Kirchhoff’s laws and Ohm’s law, you can derive a functional representation of the current and voltage at different locations in a circuit. DC techniques can easily be used to set up these problems, which we’ll show in a few examples.

Why Do Nodal Analysis in the Frequency Domain?

Because time-domain nodal analysis is limited to harmonic sources with fixed frequency-independent impedances, the results do not reflect a broad range of possible circuits. Almost all circuits do not exhibit flat impedance except in limited bandwidths. For simple circuits with harmonic sources at similar frequencies, the results from harmonic nodal analysis are realistic, but this is not the case with wideband sources and general impedance functions.

This is why it’s better to do nodal analysis in the frequency domain when working with broadband sources in your circuits. This simple technique allows DC nodal analysis methods to be used to solve circuit design problems with general impedances and wideband sources. The downside is that the problem constructed in the frequency domain must be all analytical or all-numerical, ultimately requiring a set of Fourier transforms to get back to the time domain.

Theory of Nodal Analysis in the Frequency Domain

Getting started with nodal analysis in the frequency domain follows the same steps one would follow in the time domain. In short, we want to determine the voltage and current at each point in a circuit using Kirchhoff’s laws, but we leave the impedance of each circuit element as a function of frequency. Because impedance is already defined as a function in the frequency domain, you can easily derive the following matrix equation:

This equation relates the voltage at each node (numbered A to n on the left-hand side) to the various sources in the circuit. The sources are defined in the frequency domain by taking the Fourier transform of a time-domain voltage or current source. In other words, this formalism allows any input source in the time domain to be used in the nodal analysis as long as the impedances in the frequency domain are known. By taking the inverse matrix, followed by an inverse Fourier transform, we know the voltage at each node in the time domain:

Eq. (2): Voltage at each node in the time domain found by solving the characteristic equation shown in Eq. (1).

This gives you back the time-domain solution to the problem at each node in the circuit, which is exactly what we want. Unfortunately, the method shown above is not guaranteed to produce causal results as the Fourier transform of your system will likely need to be bandlimited. This is due to the fact that the inverse Fourier transform defined in Eq. (2) may not have a closed-form integral and would need to be calculated numerically. An alternative method for getting the solution is to work in the time domain directly with impulse response functions.

Beyond Harmonic Sources in Nodal Analysis

Instead of working with nodal analysis in the frequency domain, you can work with arbitrary sources in the time domain using the procedure shown in this section. Your voltage sources can be rather complex functions of time, such as modulated or multilevel bit streams, pulses, and non-sinusoidal periodic functions.

If you know the impedance of each element in the circuit you’re analyzing, you can convert the impedance into an impulse response function by taking the inverse Fourier transform of the element’s impedance function. You can then formulate the system’s characteristic matrix equation in the same way you would in the frequency domain, which is analogous to Eq. (2) shown above. By taking the inverse, we have the following equation:

This definition in terms of impulse responses and convolutions can be used to define a closed-form convolution integral for the voltage at each node:

Eq. (4): Solution to the voltage at a node in terms of source voltages and elements of the inverse impulse response matrix.

Note that the above definition has a causal correction, where the inverse impulse response matrix element Fij-1 is truncated at t = 0. This gives the following process for solving nodal analysis problems for any input and impedance function:

This procedure is a bit complicated to do by hand, but it provides analytical solutions for non-trivial circuits with known impedance functions.