The Santa Clara Convention Center is only an exit away but the technology on display was miles ahead. Listening to Eric Bogatin speak about what’s happening along the return path of a transmission line drew in curious ears like mine. Other people got to see one of my previous managers giving a keynote speech. Chris Cole’s image was on cardboard cut-outs all over the place. His talk was around noon so I missed it.

“After unfurling the blueprint, the vendors were back in their comfort zone - discussing how they would proceed with an actual build.”

Exhibitors included a Maker zone for the “GoFundMe” entrepreneurs to showcase their inventions. Another strong suit was all of the materials vendors. Again, smaller players are showing up with post-space-age materials and plenty of competition in high-speed materials in particular. Getting the scoop on this kind of stuff makes it worth sharing an e-mail address. 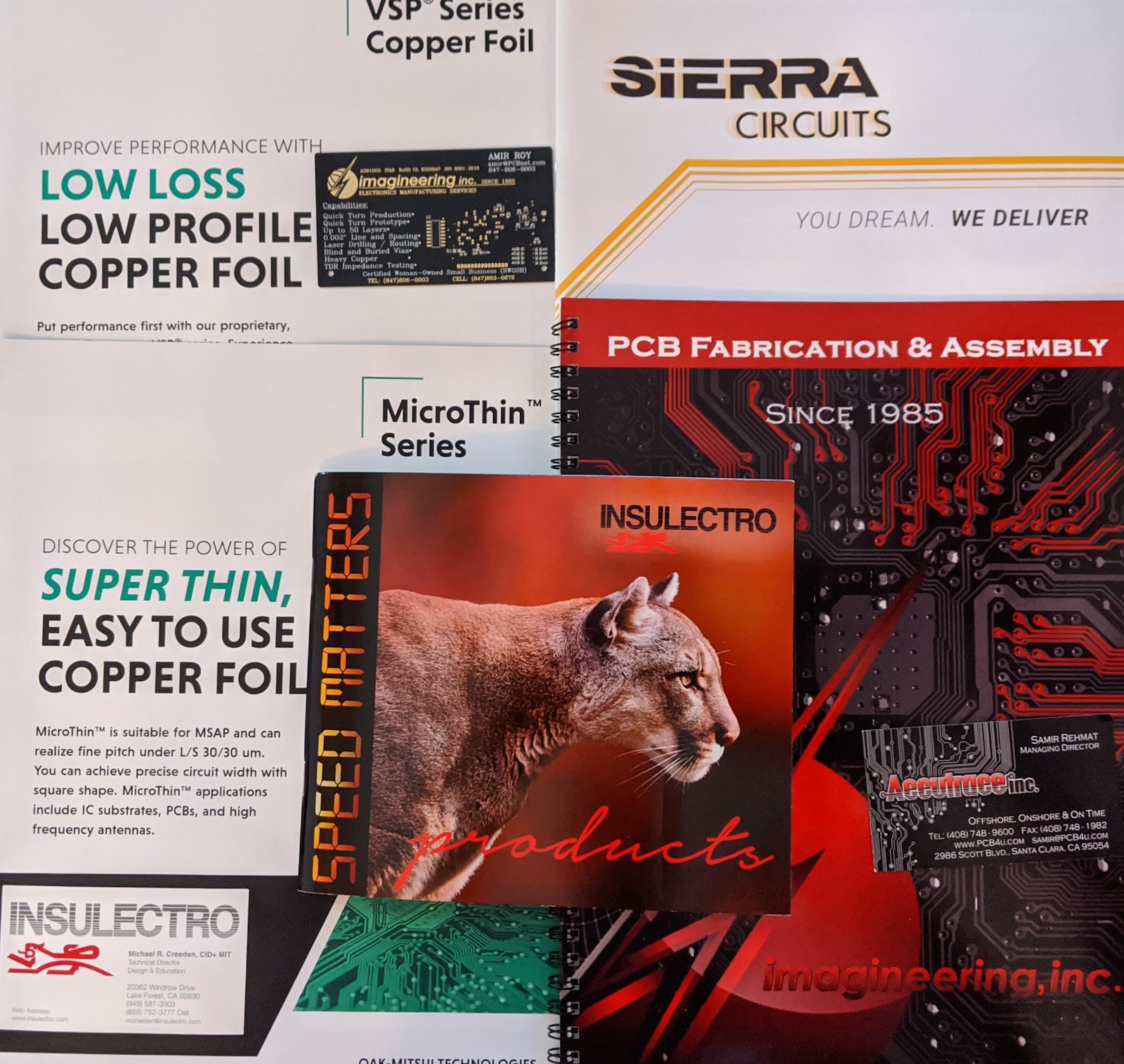 Image Credit: Author - Some of the fliers and pamphlets to be had at the show

Any long view on the trade-show floor would include a sign with 5G on it. Whether they are testing the bit-error-rate or marketing a new type of connector, 5G was a buzzword to watch. Add in the evergreen topic called the Internet of Things plus a slice of autonomy and you get the gist of what was going on technology-wise. Hardware on the leading edge is about supporting machine learning, AI and the internet backbone but they all have their own get-togethers. Software, in turn, supports us hardware people with slick simulation and verification tools. There is no pause button in all of this. 5G is now and there is some number that follows.

Meanwhile, there were only three hours to scour the show floor so I didn’t get into any of the seminars. They tended to concentrate on those same topics that drive high-speed connectivity. Interesting stuff, to me at least. Guess what. That’s mostly what I write about. Maybe, if I keep this up, I could get a chance to stand and deliver at the lectern. I grabbed the available pamphlets and catalogs for posterity along with some swag. 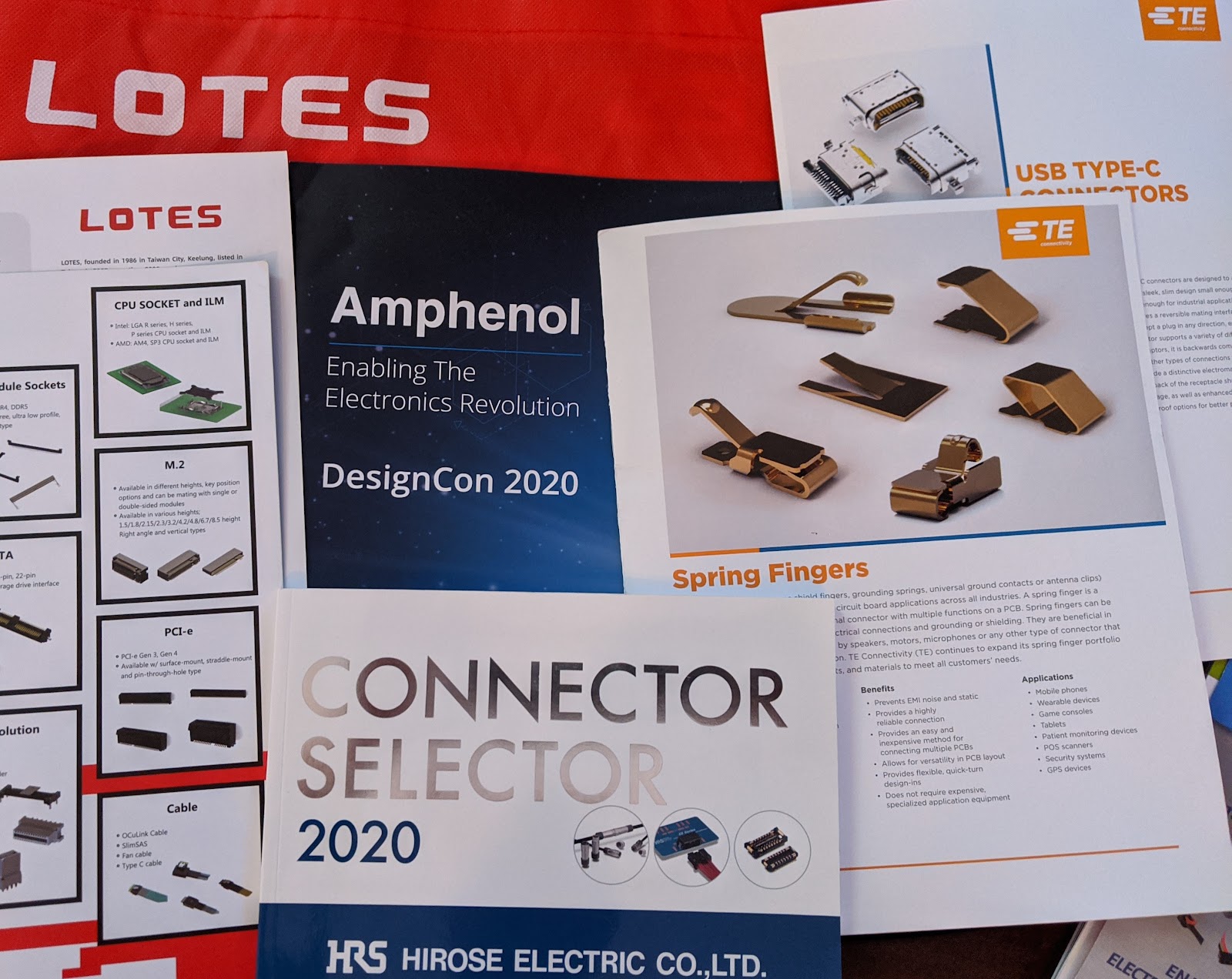 Image Credit: Author - Plenty to see and take home from the connector vendors

Of course, there are always PCB fabrication and assembly vendors to visit. 2020 was no exception. There is usually a burning question on my mind that only they can answer. Whether I’m looking for chunky automotive connectors or a new assembly house for the Chip-On-Board adventure, there must be some kind of focus. Ok, the first time I went to a convention, all I did was try to fill a bag with branded pens. That was way before CDMA (3G) or LTE (4G). We learn as we go.

This time around, the focus was diving deeper into flex and rigid-flex that play a large part in Microsoft’s HoloLens. Turnkey shops that can deliver complete FPC assemblies were getting my name added to their prospecting list. Thinking back, the best time ever was when I brought a rolled up D-size fabrication drawing. This was analog so the EE had some interesting tolerances that were found in the fabrication notes. After unfurling the blueprint, the vendors were back in their comfort zone - discussing how they would proceed with an actual build. Shmoozing is only part of their job so seeing some day-to-day work really got their attention.

Software. You knew this was coming. With Cadence rolling out release 17.4, I wanted a preview. They gave me a quick walk-through. The 3D canvas stood out. They made it more useful than just a visualization tool. The SIP package editor supports die stacking using a flip-ship as the base and other dice attached with wire bonds. This is supported in 3D with all of the mezzanine wire bond cages so you can do interference checking from that perspective view.

The rep there was happy to show me their new Sigrity Aurora SI/PI tool. The breakthrough is that it is more integrated with Allegro. Over the course of my career, I’ve seen the struggle with .dxf files to get their geometry into the simulation package. They made it look easy. That, however, is their job, I’m no longer in the automotive sector but it is great to see support for ISO-26262 as well. It doesn’t need to be said that the automotive sector is going through interesting times. 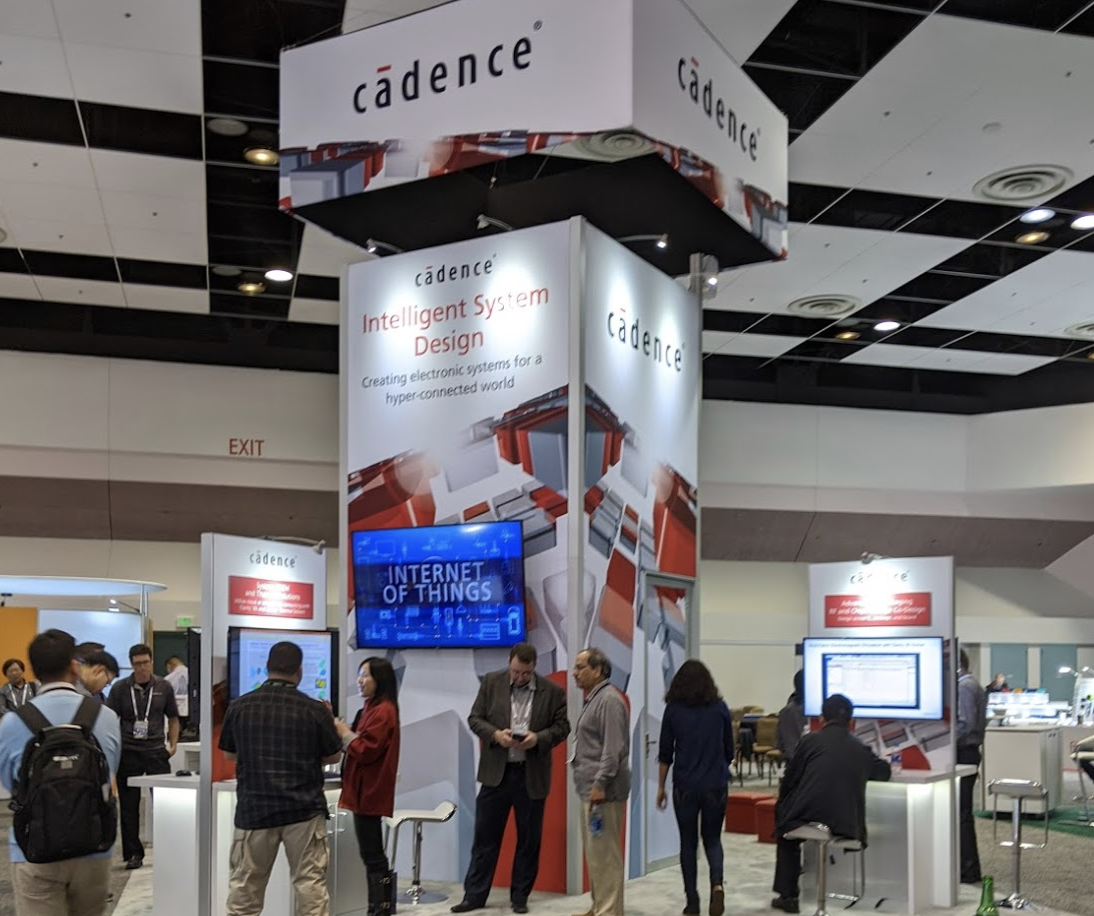 The big ECAD software vendors are all in the process of upping their games. Nobody can afford to stand still. Whether it is Blockchain or 5G driving it, the software (and hardware) is getting stronger with each iteration. PCB layout graphics are wonderful to watch when a skilled technician has their hand on the mouse. Heat maps and other performance metrics come alive on the flat screen.

Someone else does simulations too. I’ve been a long-time follower of Yuriy Shlepnev and his Simbeor THz product. He has a knack for generating great visuals when it comes to discontinuities of various types. I recommend his videos if you’re into that sort of thing. Extending the existing tools is a cottage industry of its own. The web-enabled business makes it a low barrier to entry as long as you have the talent and drive. Independent software vendors are a blessing but you have to find them among all of the other stimuli.

Advancing Technology on the Agenda

That ties in with my last point about going to conferences. Little meet-ups were going on all over the convention center. The expo hall itself was flanked by tables and chairs but also, the hallways and alcoves were thick with places for small gatherings. A few people were doing heads-down work but almost everyone was networking with someone else. Enough exhibitors were serving adult beverages to get the tongues wagging. Do I have to spell it out? FREE BEER!

So, whether you are checking out high technology, looking for a new vendor or just need some new pens, make a pilgrimage to a conference. It is the one chance you have will so many vendors under one roof. Imagine the questions you could ask. There is always something to learn. Just bring your smile and a handful of business cards. Join the fun.e