Working within the constraints of everyday life can get a bit boring every now and then. In order to stem the boredom, I have been playing MMORPGs on my phone these days. There are some important lessons to learn about these games though: getting the best performance out of any character usually requires several prototype iterations where I can determine what skills and equipment would be best chosen to maximize performance.

While I don’t necessarily translate directly the skills in experimentation and prototype management of game characters to flex PCB prototyping, I’m happy to say there’s some crossover so all you engineers out there can take a 10-minute phone break while laying traces. Here are some flex PCB prototype considerations I’ve learned along the way (that may or may not have come from my adventures in MMORPGs).

What Is A Flex PCB Prototype

If you’re accustomed to rigid PCBs, which is the usual FR4 board that’s fitted on most industrial or commercial machines, a flex PCB prototype is something foreign. Flex or flexible PCB is made of plastic-like material, often polyimide that encapsulates the conductive copper strips of the circuit.

Flex PCB prototypes aren’t new in electronics, with the earliest description filed in a patent in the early 1900s. In modern electronics, you’ll find flex circuits in keyboards, smartwatches, mobile phones, printers, and other industrial applications. With the recent trend of electronics getting smaller, the demands for flex PCB prototype design has increased.

Pros and Cons of a Flex PCB Prototype

At a glance, a flex PCB prototype looks flimsy and fragile, as if the components mounted on it could drop off at the slightest pressure. Yet, the demand for designers skilled in flex circuit design is increasing in the industry.

There are few good reasons why companies are shifting to flex PCBs in some of their products. The original intention of the flex circuit is to replace PCB mounted connectors. By replacing connectors, component costs are reduced and the same goes for the risk of bad solder joints at the connector pins.

A flex PCB prototype is also the best option if you’re designing circuits that are to be fitted into a space-constrained enclosure or small products like a smartwatch. Constant movements, vibration and mechanical stress on the product mean using flex circuits is better than their rigid counterparts. 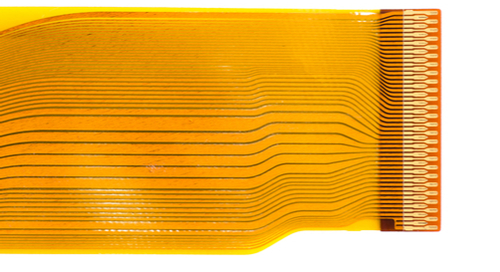 Flex PCB removes the need for a connector.

Despite the obvious advantages of a flex PCB, there are some concerns for designers. Designing a circuit on a flex PCB isn’t the same as developing a rigid PCB. Setup cost for manufacturing flex PCB prototypes is also higher and repair is quite difficult on the fragile plastic material.

Taking on a flex PCB prototype requires different skillsets. If you approach the flex circuit as you did with rigid PCB, you’ll run into hordes of troubles. Due to the flexible nature of the material, you’ll want to ensure that components are not placed near to the bending line.

Both pads and vias should not be placed within the bend areas. It’s also advisable to apply teardrops on plated holes to increase their ruggedness. As the flex PCB prototype could be subject to different angles of bending, you’ll also want to ensure the pads are sufficiently larger than the drilled hole.

It’s also a well-known rule that traces should always be routed perpendicular to the bend line. If you’re routing a bus over the bend area, ensure that both top and bottom traces are staggered alternately instead of on top of each other. Doing so will disperse the mechanical stress evenly on all traces. Right-angled or sharp corners should be avoided on a Flex PCB. Instead, use curves to prolong the lifespan of the circuit. 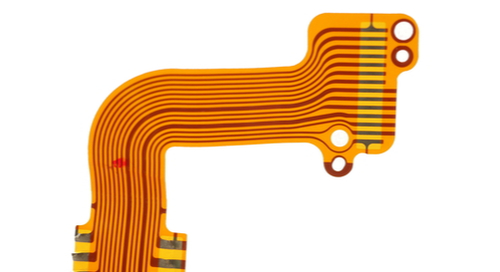 Use curved traces instead of sharp bends in flex PCB design.

A solid-filled polygon plane is a strict no-no on a flex PCB, especially on the bend area. Instead, use a hatched polygon for the ground plane to ensure the circuit remains possible and reduce the risk of the copper cracking.

You’ll also want to note down the nature of the application where the flex PCB will be installed. Factors like the size of the bend radius, and whether it’s a static or dynamic bend will determine the thickness of the material. Generally, the bend radius of a flex PCB shouldn’t exceed 10 times its thickness.

Working with the suite of design and analysis tools from Cadence can certainly provide any flex PCB prototype necessities you might have in your designs. Getting all the help you need, particularly in the form of OrCAD PCB Designer, is key to minimize teething problems in the flex PCB prototype.