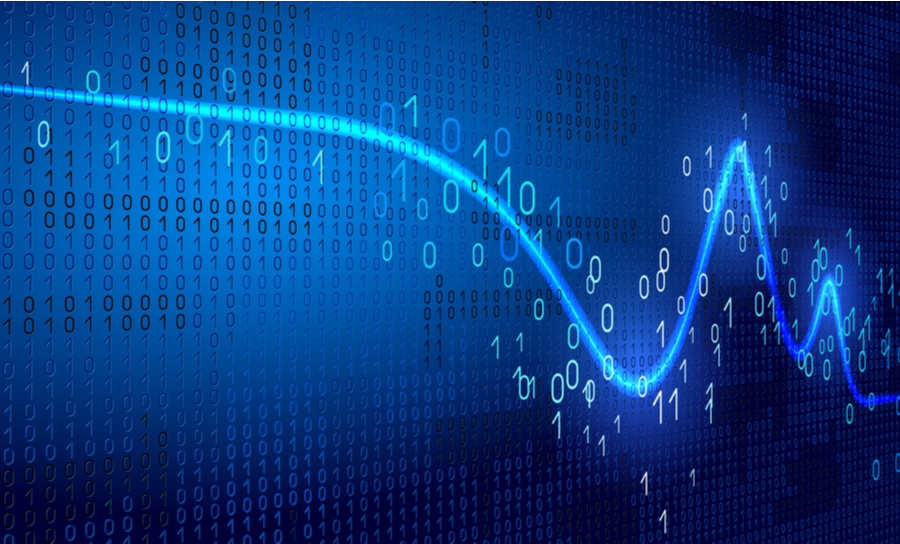 Testing and measurement involves a number of different tasks, and one of the important tasks is noise analysis. In some cases, severe noise in a complicated system can cause a device to fail, and it may not be obvious how noise behaves simply by looking at a discrete signal in the time domain. This is where noise power spectral density becomes an important tool for identifying and describing noise sources.

This standard signal processing technique is often taught in terms of continuous functions, but real measurements of electronic signals are discretized. Here, we’ll outline how to calculate noise power spectral density and how to use this to identify noise sources as part of device testing, EMC testing, or in simulations.

In a previous article, we looked at how thermal noise contributes to the power spectrum and power spectral density of noise measured in a circuit. In particular, we looked at how to calculate the thermal fluctuations in voltage/current over a Thevenin equivalent resistor, which tells you the thermal noise that would be measured at the output of a purely resistive circuit. We also looked at how to calculate the voltage/current fluctuations in a circuit with arbitrary admittance. This is particularly useful for examining the effects of thermal noise in circuit design, especially in low-level circuits.

There are other noise sources to consider in any design, and predicting the effects these noise sources have in other areas of the circuit can be very time-consuming. Full 3D FDTD or FDFD solvers can be used to simulate the time-domain signal one would see at various locations around your device during emissions testing in the absence of thermal noise. These time-domain signals are less useful than frequency-domain power spectra or power spectral densities. In particular, noise power spectral density (i.e., the power from random and deterministic EMI sources) can help you identify which EMI and noise sources in your design contribute to noise measured at specific points in space. This is effectively what is done when testing for EMC certification.

If you have a noise measurement in the time domain, you can convert this signal to a power spectrum and a power spectral density, which can then be used to identify the dominant noise sources. Possible noise sources that can contribute to failing radiated EMC tests are strong transients (both in signals and power rails), unsuppressed clock harmonics, cavity resonances, and radiators with poor isolation. In conducted EMI tests, you might observe strong peaks from all of these noise sources, as well as thermal noise, shot noise, 1/f noise, or other random sources.

Relationship between an example noisy signal and its power spectral density.

For the moment we’ll look at discrete sampled signals in the time domain as these are most often considered in test and measurement, as well as in simulations. However, you can convert the equations below to integrals and use them for continuous signals; we’ll leave this elementary exercise to the reader. The power spectral density for a discrete or continuous signal in the time domain obeys a few simple relations. There are two routes to calculate the power spectral density for any discrete time-dependent function:

Consider an arbitrary time domain signal x(t) that is sampled every Δt seconds. A sampling window contains N samples and has a total time length of T = NΔt. The

Power spectral density in terms of a discrete Fourier transform

A simpler definition is to take advantage of the Weiner-Khinchin theorem, which states that the autocorrelation function of x(t) and the power spectral density are Fourier transform pairs. It is normal to write x(t) as a function of the sample number n. As long as the noise source follows a stationary process (i.e., time invariant), the power spectral density can be calculated with the following equation:

Autocorrelation function for a discrete signal

The power spectral density S(f) is the discrete Fourier transform of the autocorrelation function R(k):

Power spectral density in terms of the autocorrelation function

Because the signal being analyzed is discretized in time, the frequencies must also be discretized. Our signal x(t) is gathered in a time window with N samples, and the value of f in the above equations is restricted to the following a set of N frequencies. The n’th discrete frequency value is defined below and depends on the sampling frequency:

Discrete frequency values in the above equations

When looking to identify noise sources that strongly contribute to conducted/radiated emissions tests (EMC testing), the typical practice is to use a spectrum analyzer, or an oscilloscope that automatically runs fast Fourier transforms in near real time. Similar tests can also be used in board testing by connecting inputs to a channel of interest and looking at signals in the time and frequency domains.

Simply looking at a time-domain trace on an oscilloscope is important for quickly identifying common signal integrity problems, such as transient ringing, problems from excessive transmission line impedance mismatch (e.g., stair-step signal response with digital signals), and excessive losses. Take a look at the image at the end of this article for an example where all three effects are present. The same can be said for power integrity; transient ringing on a power bus can be seen in the time domain. Low frequency noise can technically be seen in the time domain, but it may not be obvious from an oscilloscope trace as it tends to occur over periods that are much longer than your measurement interval.

If you have results that are in the time domain, then you can easily convert them to the frequency domain using the above procedure. However, this only tells you the frequencies of various noise sources, it does not tell you any relationship between them. Causality is an important aspect of nonlinear circuits in that noise from one portion of a system can induce a different type of noise in another portion of the system.

The two noise signals would then be delayed by some time, normally by the distance between the two system blocks divided by the speed of light. Determining causality between different noise frequency components is still an active area of signal processing research and is likely to become more important in a variety of advanced electronics systems.

Test and measurement are an important part of the PCB development process, and noise power spectral density is one of many important points you’ll need to measure. Once you’ve identified noise sources and determined the required design changes to eliminate them, you can quickly modify your design when you work with the right PCB design and analysis software. The design tools in Allegro PCB Designer from Cadence integrate with a full suite of analysis tools. These tools are ideal for designing and simulating all aspects of your board’s functionality.