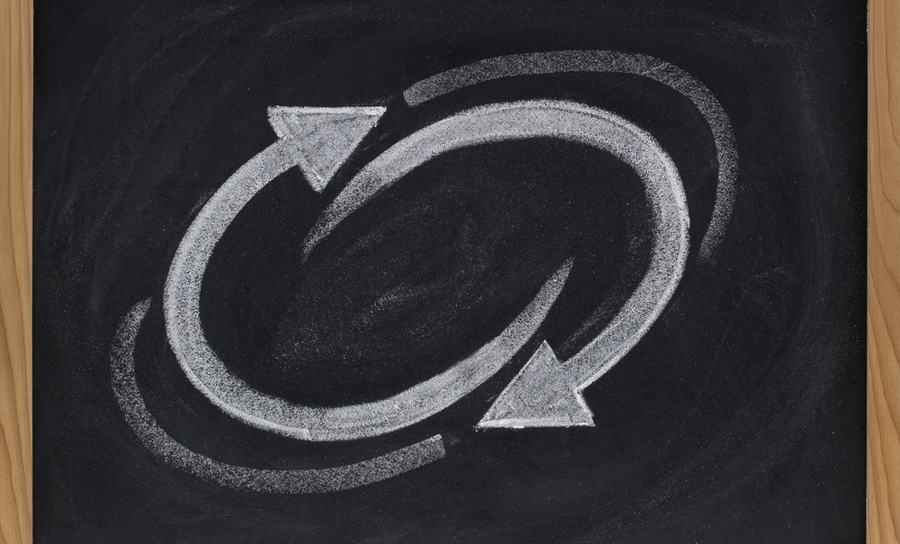 We discuss transient responses frequently around here as addressing the presence of transients is one of many important aspects of ensuring signal integrity. From ringing in a transmission line to switching in digital circuits, transients in any circuit describe the behavior of a circuit as it makes the transition between two steady equilibria. Gaining an understanding of this behavior can help you determine whether your device will function as you intended and whether you should take additional measures in your circuit to ensure a smooth transition between different free-running states in your system.

Analyzing poles and zeros provides an easy way to examine the behavior of your circuits as they switch between different free-running states. One simple example is a digital signal driver switching from OFF to ON; the driven circuit makes a damped transition from 0 V to the HIGH logic level. The poles and zeros of your system describe this behavior nicely. With more complex linear circuits driven with arbitrary waveforms, including linear circuits with feedback, poles and zeros reveal a significant amount of information about stability and the time-domain response of the system.

When most designers discuss transfer functions and Bode plots, they are really looking at the steady-state behavior of a circuit. This tells you how different frequency components in an arbitrary input signal are affected by the circuit after all transient responses have decayed back to zero. This very easily tells you how the phase and amplitude of an input sinusoidal signal are affected by a circuit and what you would measure at the output.

However, a transfer function in the frequency domain does not tell you how the transients in the circuit behave, nor does it tell you the following information:

However, the Laplace domain problem is equally important as this tells you something about stability. First, it shows you how the transient response decays or grows as the system approaches the steady state (if it even exists). Second, it shows you nicely whether the response of the system is stable in the presence of feedback. One example is in linear control circuits, which require feedback to ensure the system remains controlled in a desired state (note that perturbation techniques become important in nonlinear control circuits).

Working in the Laplace Domain

Here, we need to note that transfer function analysis and pole-zero analysis are only applicable for linear circuits. If there are nonlinear circuit elements (such as transistors or diodes), then you can only consider the approximate linear response, i.e., when the circuit is driven at low levels. The voltage or current u(t) in a linear circuit that is driven with a forcing function F(t) can be written as an n-th order linear nonhomogeneous differential equation (shown below). 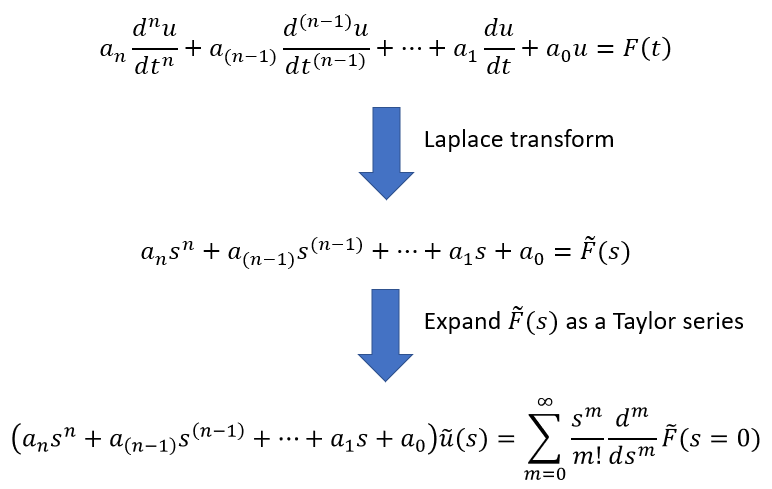 Procedure for determining poles and zeros in the Laplace domain

Note that the coefficients in these equations are real numbers. The system’s differential equation can be transformed into the Laplace domain by applying a Laplace transform to each side of the equation. The right hand side (in the 2nd step) can be expanded as a Taylor series if it is not already a polynomial function. In some cases, the forcing function F(t) can be written as a solution to its own linear ordinary differential equation and converted into the Laplace domain (a simple example is a sinusoid). In this case, the Laplace transform of the right hand side will always be a polynomial and a Taylor series expansion is unnecessary.

You can now define a transfer function in terms of the Laplace variable s. This is normally determined by factoring the polynomials in the numerator and denominator. This is shown below, where z refers to a zero and p refers to a pole. 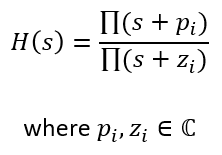 Transfer function in the Laplace domain

Note that the above equation is defined where the initial conditions are zero. Because we are dealing with a purely linear circuit, one of the initial conditions can always be set to zero by applying a translational transformation to the response in the circuit. The remaining initial condition is a real constant that is independent of s, thus it is lumped into the pole terms in the transfer function and only determines the real part of a pole.

Back to the Time Domain

Because the coefficients of the polynomials defined in the numerator and denominator are complex, the poles and zeros must be either purely real, or appear in complex conjugate pairs. If you like, you can use the transfer function to determine the response in the time domain using an inverse Laplace transform using the system’s initial conditions. Let L be the Laplace transform. The system’s response in the time domain u(t) is:

Conversion back into the time domain. Note that the circuit’s response is written in terms of the poles and zeros.

So what do the poles and zeros actually mean for the behavior of your circuits? First, let’s look at the poles in a linear circuit. In short, they describe how the system responds to different inputs. Which response is excited depends on the form of the forcing function and the initial conditions in the circuit. The graph below shows some example poles and how they relate to the stability of the system. 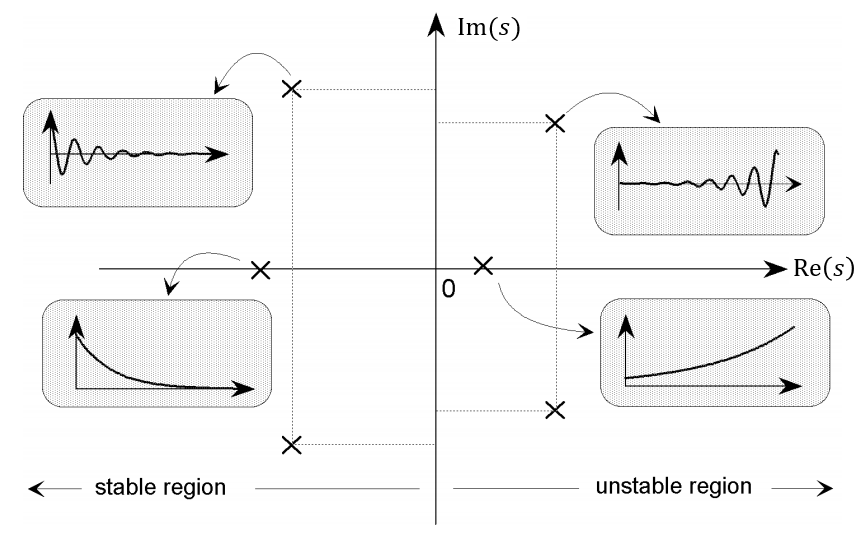 The poles on the left half of the graph always produce a stable response, i.e., the transient response decays to the new steady state in the system. The imaginary part is the damped oscillation frequency, and the real part is the damping constant. This is the exact type of behavior that corresponds to ringing, i.e., an underdamped oscillation, which is shown with the pairs of complex conjugate poles.

There can also be a critically damped or overdamped transient response, which is shown with the single pole on the real axis. This is exactly how the voltage and current behave in different damped oscillator circuits when a digital signal switches between the ON and OFF states. Note that you can use the complex conjugate poles to calculate whether resonance can occur in this circuit when driven at a specific sinusoidal frequency; you can also use a complex pole to calculate the bandwidth around a resonance frequency.

The poles on the right side of the graph show an unstable response. This typically occurs in the presence of linear circuits with positive feedback. In this case, the transient oscillation grows over time and diverges from the steady state. In a real circuit, nonlinear effects set in and cause the unstable response to saturate, or the circuit simply burns out due to the exponentially growing voltage/current in the system. Finally, there can be a pure oscillation; this would occur for a pair of complex conjugate poles lying on the imaginary axis.

The zeros describe exactly what their name suggests; these are the inputs frequencies that produce no response in the circuit. These would appear as a sudden drop to negative infinity in a Bode plot. Note that a zero at the above plot corresponds to DC driving; in other words, a DC signal would produce a zero response and no transient response.

What About Coupling and Feedback?

Note that we haven’t considered coupled equations with a forcing term, which normally arise in the case of linear circuits with complex feedback systems. In linear circuits that cannot be decoupled into a single equation, you are better off applying stability analysis techniques for nonautonomous coupled linear differential equations.

Instability can easily arise in a linear circuit in the presence of feedback. Despite the limitation of transfer functions being limited to purely linear circuits, then can be used to design linear control circuits for a nonlinear circuit be approximating the nonlinear circuit’s response around the desired equilibrium point. Note that this is the same approach that is used with coupled nonlinear nonautonomous systems (i.e., the so-called frozen coefficient method).

Why Work With Poles and Zeros?

This is a fair question; one might wonder why you wouldn’t use a frequency sweep or standard transient response simulations in the time domain. First, a frequency sweep only shows what happens in the steady state when the system is driven with different frequencies; it doesn’t say anything about the transient response. Second, time-domain simulations can also show you the transient response, but it is difficult to determine whether resonance can occur in the circuit. Transient simulations should complement pole-zero analysis; they are great for getting an in-depth view of a circuit’s temporal response after you determine the poles and zeros.

If you’re designing complex circuits and you need to examine their transient behavior quickly, you can easily determine poles and zeros for your system when you use the right PCB design and analysis software package. Allegro PCB Designer and Cadence’s full suite of analysis tools make it easy to determine poles and zeros for your circuits and perform many other analyses for examining transient and steady-state behavior.