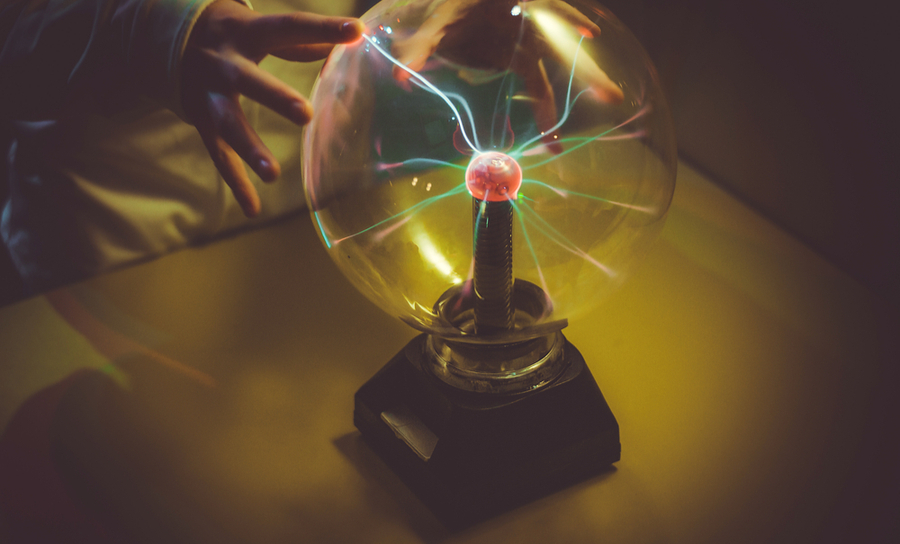 Remember those huge knife switches in the old horror and Frankenstein movies? Switches so enormous they needed a hand-sized grip handle. The scariest switches were those lined up in series, and they operated the torture rack. The mad scientist would be screaming wildly, while throwing each knife switch with sadistic relish, the cries of agony of his victim escalating as the voltage climbed higher and higher with each switch thrown -- what great stage props those knife switches made!

That was the technology of the day when Nicola Tesla floated down the stairs from wherever he came from, to lift humanity into electric light, hydroelectric power, x-rays, the induction motor (which freed women with the washing machine), the Tesla coil, and wireless transmission, to name only a few of our blessings. Insatiable explorer of electrical phenomena and magnetic fields, Tesla not only encountered excessive voltages, he pursued them! It was while toying with the reverse polarity and voltage increase caused by switching, that Tesla made observations that eventually led to his discovery of what he termed "broadcast energy" --- invisible energy that we call "wireless" today.

Why Does Switching Cause Reverse Polarity and Voltage Increase?

Tesla observed powerful blasts when knife-switches were quickly closed and opened in his 3-phase alternating current system. He observed that when the speed of the switch-action is brief enough, and the power sufficiently high, the effects are like lightning.

Reverse polarity and a surge in voltage can occur in a circuit that has an inductor (a coil that creates a magnetic field), and a switch. Switching causes voltage spikes that most devices are not designed to withstand. The moment the switch is opened and the current drops off, the inductor's magnetic field collapses, sending a voltage pulse of reverse polarity across the opened switch contacts.

This voltage is much larger than the source voltage, causing electrons to jump the air gap between the switch contacts, creating an electric arc between them. The arc continues until the energy stored in the inductor's magnetic field is dissipated as heat via the arcing action. This is most undesirable, as the arc can damage the switch contacts, causing pitting and burning, eventually destroying them, and can cause fires.

The Flyback Diode Solution to Switching

Reverse polarity and the surge in voltage across the switch contacts is exactly what the flyback diode addresses. This problem is a real threat in a spectrum of applications, including mobile electronics, battery-powered systems, automotive power supplies, DC-powered toys, products with barrel-jack connectors that are used in cars, and even systems that connect to USB ports.

This phenomenon has been given many names, making this topic confusing for the beginner electronics engineer. In addition to the term reverse polarity, you will also find terms such as "inductive kick", "negative polarity event", and "freewheeling current". If you have ever inserted your car battery in backwards, accidentally connecting the wrong terminals such that you fried your battery, you have experienced the damaging effects of reverse polarity! Hence the need for a flyback diode to protect the circuit.

Of course, the flyback diode was not yet invented in Tesla's time, so he had to develop his own method to address what he termed "contaminating current reversals" that interfered with his lightning experiments. His solution was two-fold: 1) he placed two strong magnets shaped into points at right angles to the spark gap, forming a magnetic field which partially quenched the spark; and 2) he placed two horn-shaped electrodes (horn arresters) on either side of the spark gap. After opening the switch, the resultant reverse polarity current from the coil inductor was pulled by the magnetic field along the horns until they were rapidly extinguished. In this way he achieved a unidirectional impulse of very great power. 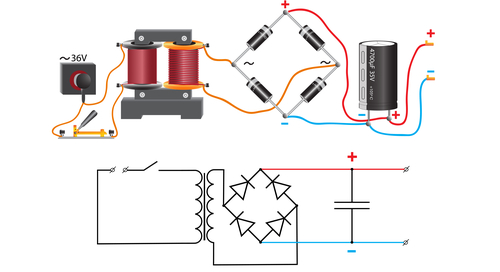 Working through a diode in your design may look like this

How Does the Flyback Diode Work?

The term flyback means a return to the starting or original point of a beam of light (television) or electric current. To prevent the reverse polarity voltage pulse on switch turnoff, a flyback diode is connected in parallel across the inductor. The function of the flyback diode is to allow an electric current to pass in one direction only, while blocking it in the opposite direction. Like a ball check valve for fluids -- the valve allows forward flow, but if the fluid backs up, the ball seats itself and passage is blocked.

If the voltage across a flyback diode is negative (circuit current is flowing and switch is closed), no current can flow from the diode -- it is OFF, or "reverse biased". When the switch opens, the diode conducts current -- it is ON, or "forward biased". As the switch opens and the reverse polarity voltage surge is powered by the energy from the collapsing magnetic field, the inductor and diode momentarily form a circuit. The flyback diode supplies current to replace the current from the battery, and the inductor current does not drop abruptly -- the arc is prevented from forming at the switch.

The flyback diode has been given many names. It is also called a freewheeling diode, snubber diode, suppressor diode, catch diode, clamp diode, and a commutating diode.

Usual industry practice is to test relays and establish performance ratings without inductor coil suppression. When the suppression of inductor-induced voltages is required to prevent reverse polarity during switching, it is recommended that the relay's performance be evaluated with the specific suppression method that will be used.

The flyback diode method of suppressing reverse current provides maximum protection to the solid state switch, but may have adverse effects on the switching ability of a relay. The flyback diode across the inductor is one of the best methods to render a slowly decaying magnetic flux, however, this also means the least net force is available to open the switch armature. Using only the flyback diode by itself can occasionally result in loss of sufficient armature velocity, where the contacts "stick" with the possibility of a contact “weld.” 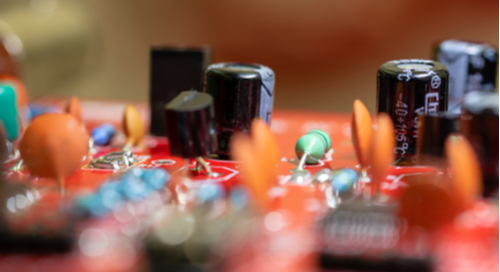 This potential can be completely avoided by using a Zener diode in series with a flyback diode. When the switch is opened, the inductor current is shunted through this series arrangement, maintaining voltage equal to the Zener voltage, plus the flyback diode provides current until the inductor energy is dissipated. The Zener voltage value should be chosen to limit the inductor switch voltage to a level acceptable to the switch rating. This affords the best scenario for both inductor switch protection and relay switching performance.

With all the considerations that PCB designers must juggle while also focusing on time to market, collaboration with global leaders in circuit design will assist your company to make a quantum leap in both creativity and productivity.

With the help of today’s simulation tools, even the most complex Flyback SMPS can be easily simulated. This is done through a vast array of component model parameters available in an over 34,000 component library, as well as strong SPICE features enabling simulation for tolerances, vulnerabilities, and power consumption.

Our Cadence team can help you to optimize your designs and achieve breakthroughs that will make a difference in all aspects of your product lines. Cadence can train your engineers and CAD designers on our automated design and circuit verification software to make their innovations flow effortlessly into finished product designs. But if you’re looking to get started on circuit simulation and modeling parameters, PSpice Simulator is the tool you ought to be looking for.