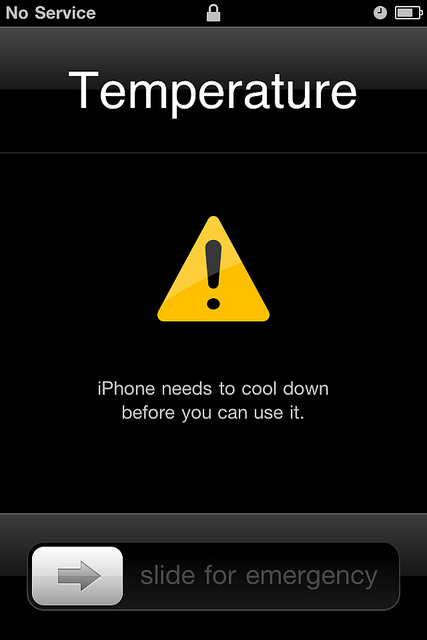 How many times have you noticed your mobile device getting a little warm to the touch? Most of the time, it’s not a big deal. But sometimes it is: A few models of phones have gotten so hot that they have caught on fire, leading to airline bans.

While the odds of having your phone spontaneously combust is extremely rare (about 1 in 10 million, according to battery safety specialist Brian Barnett), it’s happening more frequently these days because of the increased use of lithium-ion batteries.

Cell phone overheating is a problem because we’re demanding more from very small devices. In other words, we want pocket-sized gadgets with the computing power of laptops. PCs often have elaborate cooling systems such as internal fans to keep runaway heat in check. Smartphones don't, which means product designers need to focus on smart design to reduce the problem.

Why do phones get hot?

Why does your cell phone even get hot in the first place? Every electronic and computing device consists of circuits, which contain long, thin wires that conduct electricity. In an ideal world, these would be perfect conductors and electricity would flow through them unimpeded. But in the real world, all materials have some resistance.

When an electric current flows through a conductor, it has to spend energy to overcome resistance. This energy is released as heat that raises the temperature of the entire circuit. The heat dissipates over time and is carried away by the packaging and air surrounding the circuit. But if too much heat is generated too quickly, and if the packaging is too tight, then the heat can build up.

The problem with runaway heat is not limited to cell phones. Computers have central processing units that function with transistors. The transistors switch on and off between states as they run programs and process data. As they do so, they generate heat. The more frequently they switch on and off, the hotter things get.

In the cases of the devices that caught on fire, the problem might lie in the compact design of the lithium ion batteries used. The positive and negative terminals of the batteries touched, leading to combustion.

What are the common culprits?

At its most basic, the more work you make your cell phone do, the hotter it gets.

The problem becomes particularly acute when the device is being strained by running lots of apps or programs. Bluetooth is another big user of processing power, making devices heat up at a faster rate.

Covers can amplify the problem. Though phone covers and jackets make phones look attractive, they are heat traps.

You can tell your cell phone might be getting dangerously hot if it feels too hot to the touch. Unusual bulges or warps are also a telltale sign of trouble. Subtle hissing sounds could be an indication of runaway chemical reactions. Cell phones also work more noisily when strained.

Too much heat can lead to expensive field failures that can take a while to fix. Bad publicity and  warranty charges and recalls are all a cost of field failures. Cell phones and related electronic devices should be designed and manufactured to manage such eventualities effectively.

There are many things consumers can do proactively to make sure cell phones and devices don’t overheat. These strategies include:

Of course, the onus of keeping devices functioning smoothly must not rest on the end consumer alone.

Sound design is good practice in all manufacturing,  especially in electronic devices that pack a lot of punch in a small space.

The pressure is on to design phones that are capable of delivering more and more power. Manufacturers are embracing high-performance batteries such as lithium-ion, and optimizing their design for small spaces. Tolerances are a particularly important consideration, as space to maneuver is limited and the consequences of bad design can be disastrous.

Most phones and devices are designed to have the heat dissipate to the atmosphere, and such dispersion can be accelerated by efficient designs.

While heat is an unavoidable cost of cell phones and other electronic devices, it can be minimized through efficient design and proactive user controls.