High Definition Media Interface is a beautiful thing. Back when 1080P meant something, the HDMI spec entered the scene as an upgrade on the legacy trio or quintet of RCA cables. The number of legacy cables would add up quickly from various sources to the display. The digital revolution after the turn of the century allowed for a more straightforward installation with a less cluttered and accident-prone connection scheme. HDMI also helped us integrate our computers and more advanced gaming systems with our televisions. 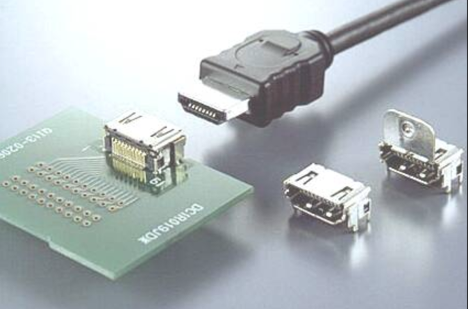 The TV people couldn’t stop at 1080P though. Progress means that the HDMI specification has had to go through a few dot-revs landing on the current 2.1 specification. Support for 4K video at ever faster refresh rates and lots of audio channels have been the leading causes of feature creep. Ethernet over HDMI (version 1.4) is an interesting use-case. We can use short runs of high-speed data (100 Mbit/s) over the same cable so that properly equipped devices can weave content from online with content from a media player or gaming console, allowing a more immersive experience. 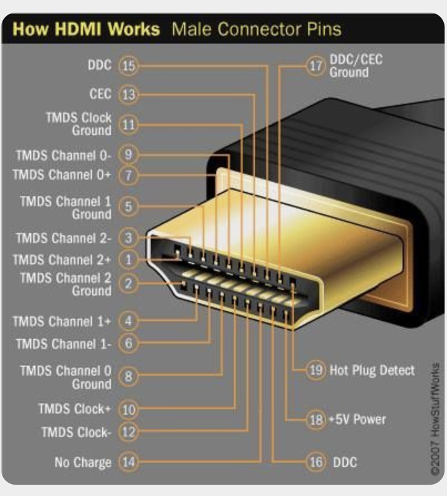 As with USB, someone had to say, “Make it smaller” and so it is with HDMI. The phone holds center court in personal electronics and the same 19 pins have fit in a smaller space. You veteran PCB Designers know what this means. It just got harder as we push deeper into the pain-zone of our fab shop. Tolerances get smaller while the connector body closes in on the pins. HDMI 1.0 used 0.5 mm pin-to-pin pitch. The newer version has 0.4 mm pitch but still has one row of pins that are fairly simple to fan out. Micro HDMI takes the USB C approach with two rows of pins on the same 0.4 mm pin-to-pin pitch.

Impact on the Board

For normal people, the point-four millimeter pitch works out to 16 mils; not a lot to work with. The capture pad on a typical Class 2 via is 18 mils -- not even counting the air-gap “anti-pad” business. Laying down a four mil dam of soldermask between these PCB solder lands leaves us with 12 mils to play with. According to IPC specs, we also shrink the pad down to gain room for soldermask expansion, and that is another 4 mils. Now, we’re down to an 8 mil pad width. That is the typical width of the pin. Where do we put the solder fillet?

We’re making it hard to use the low-tech Liquid Photo Imageable (LPI) mask which uses a process similar to silkscreen. The shop will likely have to resort to a Laser Direct Image (LDI) process which burns the openings one at a time. Mask defined and gang relief are your other options. Note that some fab vendors are ahead of the IPC curve and can get by with 3 mil expansion using LPI process. The four-mil lay-down is still best practice. That requirement is more about adhesion than solder bridge prevention. Every little bit helps at this scale.

Going the Rest of the Way

The smaller version has all of the same circuits but twice the headaches on the fan-out. The four diff-pairs are to be treated like siblings, all the same in terms of length-matching, routing layers, impedance and, via-count. They are fussy! Nothing personal. Display Port is fussy. So is DVI and MIPI and every other camera or display protocol in existence as far as I can tell. Those among you designing graphics cards and/or chips have my respect. Expect extreme constraints that put the design on a one-mil grid to meet the matching requirements. The two rows of staggered pins will allow you to demonstrate your prowess in creative meandering of loosely coupled differential pairs. Stick with the regular size receptacle and connector unless/until you have to down-size.

Fun fact: The HDMI standard includes a 10,000 insertion/extraction reliability requirement for the connector fingers. Selective Hard Gold plating in your fab notes can be a considerable upcharge.

The challenge beyond the physical and electrical constraints is the variety of different versions of HDMI. Whether or not to have the Ethernet option, and an ever-expanding number of frame rates and resolutions. Video in general is tricky to nail down without some routing study cycles. HDMI complicates it all by coming around at a disruptive time in terms of both the supporting hardware and the protocol itself. We still can’t see ten years out. Not surprising that we could not do so a decade back.

My introduction to HDMI came along in the form of Google’s Chromecast so, of course, I have a story. Streaming entertainment from your small screen to the shared experience of the TV is the job of the ChromeCast. It was a small team back in '13, and we shared resources. Resources like me. As a 20%-time project, I got to get away from Chromebooks and back into the dongle zone where space is really at a premium. Given a low price target, a low tech board was also required. Doing more with less is a common theme in consumer electronics. At six layers, keeping all of the parts close together and the routing far apart while keeping everything cool took a little more than 20% of my time.

It was worth it. The little dongle sold like searing birthday bread. According to recent stats, 6% of American households have at least one Chromecast device plugged in and streaming away As a bonus they are getting better at it all the time without the users having to put any effort into the OTA upgrades. Tens of millions sold and counting. Google staffed up allowing me to take on new challenges. I can talk about those maybe in a year or two. That's how they roll.

Image credit: Author Note that this connector wrapped around the PCB with pins on top and bottom.

This gadget presented one of the classic problems in PCB layout. The chip vendor had a beautifully elegant solution for connecting the processor (SOC) to the main memory (DDR). It also has a flash in that big rectangle, a radio, power management, HDMI and USB ports along with incidental circuits in various enclosures.

The SOC to DDR solution was an offset belly-to-belly placement with via-in-pad on both sides with a core via in between. That's it, a double-headed snowman and done. A 1-4-1 stack up was the cheapest solution though we tried a few others.

The thing was that the chip vendor used a 16 mil capture pad for the core via in the reference design. The vendor, ever mindful of our tight price point wanted maximum yield. This was something that they could only achieve with a 18 mil capture pad. The larger pad would have broken the ground plane up beyond what our simulations would tolerate. (This was a long time ago in terms of technological advancement but only a few short years on the calendar.)

What do you do? A sit-down with both vendors to hash out a solution. We ended up relaxing the break-out spec to tangency for the minimum annular ring and only using the 16 mil pad in the specific area and on the necessary layers. Everything else got the mainstream treatment. The project went forward with a minor redesign, and the rest is history.

Then comes the future. Quick, give me a number greater than four. Did you say eight? Great – even if you guessed something else. We’re looking at a time when 4K is the old way, and 8K is what the cool kids are watching. Current plans are afoot to usher in still more bandwidth to continue the pursuit of repeat customers. According to a known reliable source on the internet,

“One proposal to replace HDMI is called Super MHL, backed by Samsung, Sony, Toshiba, Nokia and chip-maker Silicon Image. It’s aimed at 8K video, a new format not expected for several years that offers pictures with 16 times the resolution of today’s best high-definition TV. It’s based on the MHL standard already in existence, but one you’ve probably not come across. MHL sends video over the USB connector on a phone to a flat-panel display…”

For now, that drawer/box/stockroom/warehouse full of RCA, VGA, USB, DVI, Thunderbolt, DP and/or HDMI cables, adapters, converters, splitters and hubs will keep us occupied and connected for the foreseeable wired future. You Firewire people, however, may be on your own.