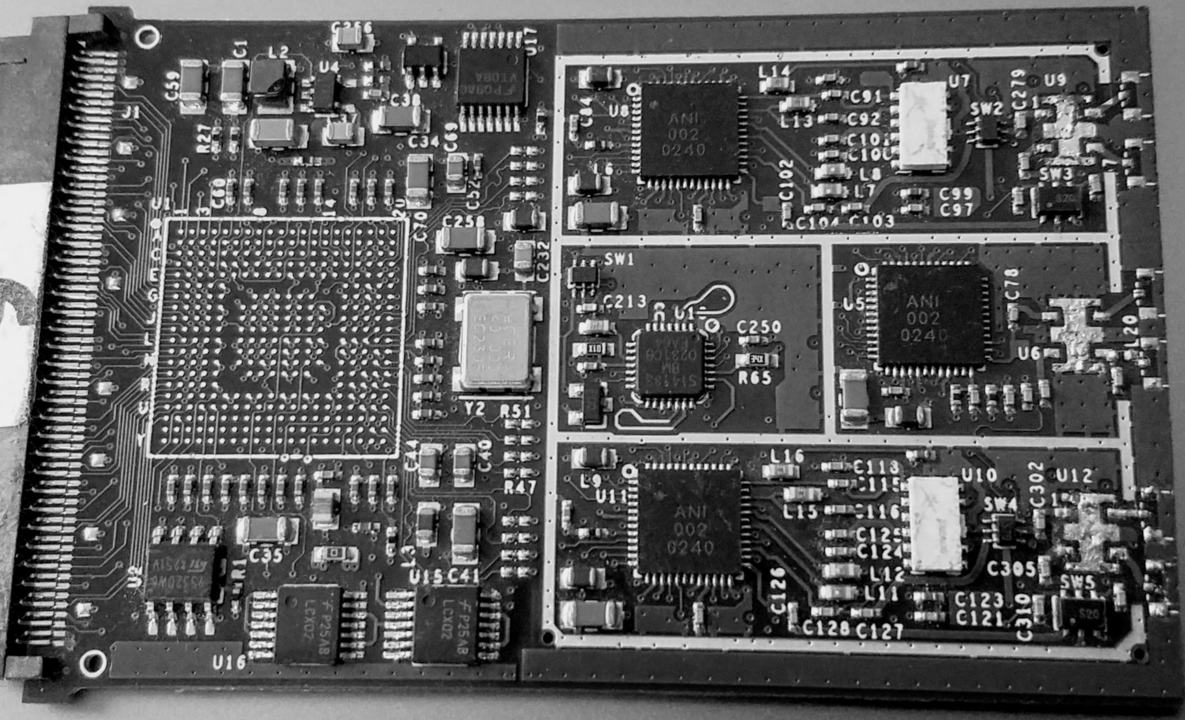 Of course, you know what WiFi is. You can get it wherever money changes hands.  Being WiFi-enabled is a low-risk strategy when it comes to the number of hot-spots you're likely to pass through on a given day. The standard that the IEEE uses to regulate WiFi is the 802.11 document. The numbers are followed by letters like a, b, c, g, and n in some combination to indicate how the device will dice up the available bandwidth. Three of the standards, b, g, and n, use the popular 2.4 GHz space while a and c devices are in the 5 GHz range.

From a PCB layout perspective, you should be taking measures to ensure that you have clean transmission lines at 2.5 GHz. Doubling the frequency to 5Ghz, (not to be confused with 5G -the latest trend in wireless communication) puts even more emphasis on avoiding discontinuities.

Some of the best practices that will help with this challenge are as follows:

Keeping lines short keeps antennas small. The nature of wireless makes every conductor an antenna. Turns in the line are a chance to propagate reflections back to the source which can have a canceling effect on the wave front. Going to another layer is like running the signal into a brick wall. If you must transition to another layer, create a Faraday cage in the Z-axis with a ring of ground vias around the signal via.

Line width matching is harder unless you have a stack-up construction with thicker dielectrics. With High-Density Interconnect, we're restricted to thinner dielectrics. The narrow linewidth RF trace going into a typically wider pad creates an impedance mismatch.

Correcting this mismatch can be simple as moving the reference plane further from the pad. An old guru (small g) trick I use is to create a void in the copper pour on the layer below the pad and make sure the layer below that is also a ground plane. This way, the wider pad sees a reference plane that is about twice as far down as the narrow trace sees. If the ratio from pad size to trace width is even greater, we might use a couple of windows below the SMT pads in order to bring the impedance of the trace and pad into better alignment. Be sure to include fillets on the traces where they connect to vias or pads for a nice organic interconnection.

Analog routing drives placement in terms of the receive and transmit chains. While any capacitor can be considered critical, special attention should be given to those whose value is less than 0.01 uF. Close to the power pin is important but does no good unless the ground pin on the capacitor has a via to the ground plane that is also close. Follow the energy flow from the hot pin through the cap and back to the ground pin on the device. That path is the inductive loop. The power of an RF device cannot stand inductive loops. Taking good care of the power will mitigate the effects of some compromised signal routing you’d encounter below the BGA packages.

Ground pour with sufficient pull-back from the RF trace is usually designed to be 2 or 3 times the line width of the trace. The structure you're building on the outer layer is a transmission line only. The stitching and copper pour on the outer layer are there to protect other pieces of the circuit from the effects of the RF energy. Unless you are routing a co-planar waveguide, the outer layer ground plays no role in the target impedance unless it gets too close. The impedance happens on the reference ground layer just below the trace. More specifically, the controlled impedance happens in the dielectric between the metals. Keeping that ground plane solid under the RF trace is an absolute must-have for the function of your device. Depending on your isolation requirements, a single row of closely spaced ground vias on each side of the RF traces should be enough for isolation.

Beyond the product working in a lab, we have the FCC waiting to bear down on any device that it determines to be a nuisance to other devices or too thin-skinned to get along in an RF war zone. The industry walks a tightrope between broadcast power and receiver sensitivity. WiFi is operating in a crowded spectrum sharing frequencies with everything from remote control helicopters to alarm systems. It’s harder and harder to truly get away from coverage of some kind. Sitting here on the couch, the WiFi sniffer shows nine different wireless hosts if you count the one called “FBI Van”;  About average.

The industry walks a tightrope between broadcast power and receiver sensitivity.

You talk about desense early or you talk about dropped packets later on. There are moments of truth. The industry refers to them as Plug Fest and if you are in the alliance, you get to bring what you made and find out about any interoperability improvements you should make next. I've never been to one, but I doubt that it would be all that festive. If "they" are gathering intelligence, why not you? They are in the alliance for the same reasons we are. Learning from someone else's failures might even be your reason for reading this article. 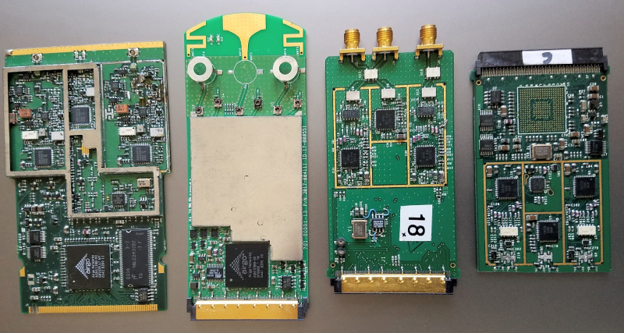 Oh yes, we face failure when trying to integrate three receivers and two transmitters with a baseband device in a form factor that gets smaller every time you turn around. Airgo Networks had some sweet patents in the OFDM space and our WiFi radios were hands-down the best in terms of rate and range. If one company, say Netgear, was to put our latest chip into their modem, then Linksys, Belkin and the rest had to refresh their halo product to keep up with the bragging rights. One design win would cascade like that. Multiple flavors were always in the pipeline.

Back in the day, the laptops didn't come with a wifi chipset. It was a natural for our ASICs to devise a little modem that the carriers could issue so that people could "cut the cord" on their devices. Airgo had a few skews going all the time. Good old USB, PCI, PCIe and a variant of PCI called Mini Card. Oh, then there was half-mini-card because "mini" just doesn't capture the problem with enough desperation.

The Marketing team was doing a great job of driving the 802.11.n specification towards our MIMO technology. That is crazy! There are companies in this space that are so big, their quarterly report would round off the valuation of our 80 person company.  We could be bought and sold without a blip on their radar and here we are driving the specification with our technology.

When it comes to WiFi, there are good emissions and then there are spurious emissions.

Do you know how much margin for error you have when mega-companies have you in their cross-hairs? The CEO had two metrics. One was, "When can I have customer samples?" and the next question was "When can I have 10,000 on a boat?" We were doing some final tune-ups before launching the boatload and something in the chain had broken.  When it comes to WiFi, there are good emissions and then there are spurious emissions.

We had a "spur"; a spike of RF energy at a frequency that was not planned nor was it welcome. These were some motivated and energetic underdogs. We found a problem on a Wednesday. Came up with a solution and tested it on a Thursday, implemented the improvements and taped out a new board on Friday. We also produced artwork for two other SKUs with the same upgrade that Sunday. On purpose.) They’re not going to hold the boat and we can't fill it with just one flavor!

A common attribute among the boards is that they are all highly compartmentalized. The shielding makes it possible to have two transceivers plus an additional receive chain in close proximity to the baseband chip. That was about ten years ago. Today’s leading edge puts this whole deal on about 20% of the PCB real estate of smartphone. Mind you, 100% of a smartphone PCB is still not much.

Those applications often require custom Front End Modules (FEMs). The FEMs are nice because the tricky part of the routing is on the module. Once Qualcom had bought Airgo Networks, (and the patents), I found myself capturing those types of WiFi circuits for customers. We went from those modules down to chips that combined WiFi and Bluetooth to meet customer demand for smaller solutions.  Then, at Google, we were the customer. WiFi has been good to me for the past decade. It has also enjoyed steady growth as the definitive wireless local area network protocol. As it grows in popularity, it shrinks in form factor. 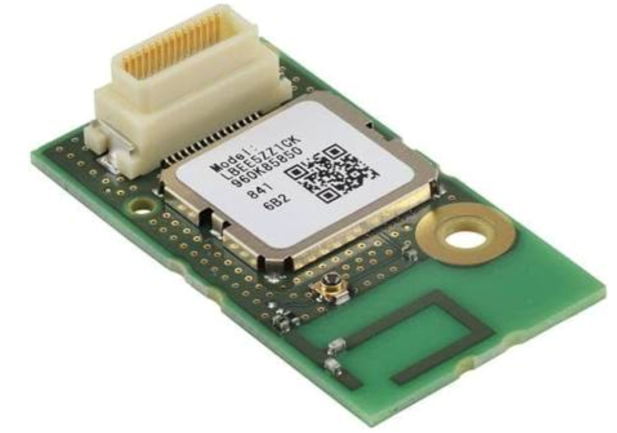 Now, for the rest of us, WiFi is also available in module form factors that require standard connectors to a host of some kind. The per unit price over $20 will dissatisfy some buyers. The 20 week lead time is even worse. So go ahead and buy the six dollar WiFi with that unshielded beauty. See you at the Plug Fest. Seriously, if you’re going to deploy WiFi, take your design in-house or deal with a reputable wireless hardware supplier. Everybody likes a good connection.