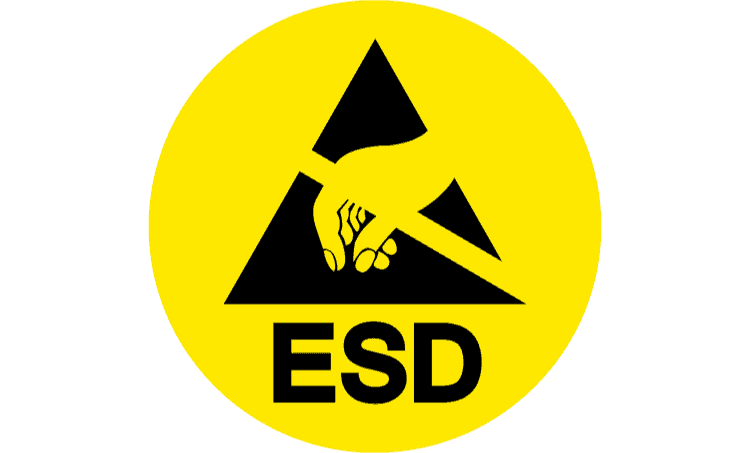 ESD prevention is critical in the electronics industry

Electrostatic discharge (ESD) occurs when any charged body attempts to become electrically neutral. During ESD, the static charges stored in one body rapidly get transferred to another at different electrical potentials through direct physical contact, induction, or arcing.

What Is Electrostatic Discharge?

Electrostatic discharge is the unintentional flow of charges between objects that come into contact. It is spontaneous and can also be caused by non-contact through arcing and coupling. ESD is characterized by voltage, which indicates the potential difference between the objects where the charge is getting transferred. The voltage can be from a few volts to kilovolts. Humans experience an ESD event when the discharge voltage is around 3000 V or higher. However, ESD of a low value, say 100 V or less, is sufficient to induce consequences in the electronics industry.

The Consequences of Electrostatic Discharge

In the electronics industry, ESD is a costly event. Unintentional occurrences of ESD in manufacturing processes can diminish quality and reliability, or even cause total failures.

In certain cases, ESD problems go unnoticed, and a product suffering from ESD issues can go out on the market. ESD-affected components in circuit boards or electronic products start showing problems as time passes and can eventually experience circuit dysfunction. These types of ESD issues are especially concerning in critical applications in the medical and military industries.

Next, let’s take a look at a few of the types of failures that harm ESD-sensitive components.

ESD-sensitive components are susceptible to the following damages or failures when subjected to ESD:

The levels of ESD sensitivity, and subsequent damage, differ with each component. ESD damages are dependent on the ESD component voltage withstanding capabilities and heat dissipation capabilities.

Next, let’s take a look at some common ESD-sensitive components.

Cadence can help you implement ESD mitigation methods suitable for your circuit. Subscribe to our newsletter for the latest updates. If you’re looking to learn more about how Cadence has the solution for you, talk to our team of experts.