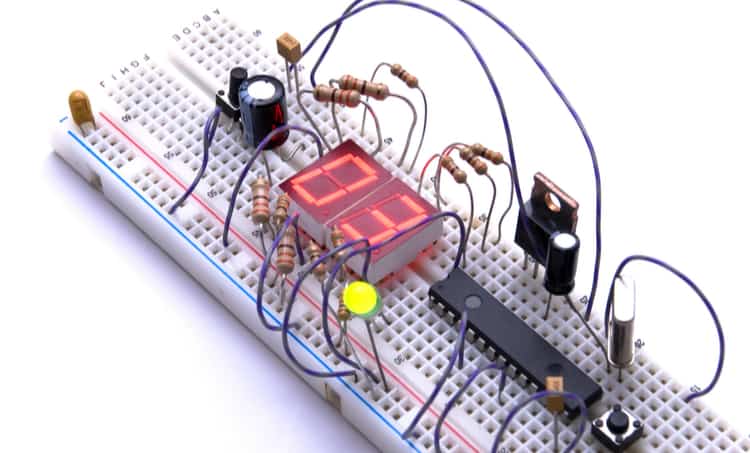 New electronics are sometimes developed on top of an evaluation board, development board, or, for lower speed/frequency devices, by using through-hole components on a breadboard. For simpler designs, such as the breadboard arrangement shown above, you won’t need multiple prototyping runs. The design can be laid out in nearly any way you like and it will probably work as it did on a breadboard. For more complex designs that run at a higher speed/frequency, the design most likely needs multiple prototyping runs to ensure that the signal integrity, power integrity, and functionality match your specifications.

Virtual prototyping methodology is important to ensure your design operates as you intend. Just as you can use simulation tools to help check specific circuits and design choices, you can use simulation tools in your schematic editor to check your overall system functionality after your circuit design is finished. Here is what you should examine in your circuit with circuit design tools as part of a virtual prototyping methodology. The idea behind virtual prototyping is simple: use design software to model a system’s functionality during and after finishing a new design. The goal is to simulate and visualize the system’s behavior in real-world conditions. Ideally, you can identify functionality problems and correct them through an iterative process. These corrections might involve choosing different components, adjusting component values, or changing large portions of a circuit.

Virtual prototyping does not help you prevent errors in your initial design. However, if your design happens to contain errors, either because the engineer or system designer made mistakes, virtual prototyping can help you catch these errors before you start a prototyping run. The end goal is to eliminate design errors that cause a prototype to fail functional testing or in-circuit testing before producing prototypes.

Once design problems are located in simulations, the results can be compared to design specifications, and areas requiring change can be identified. Required design changes should be executed and re-evaluated in a cyclical process until the system reaches the desired specifications. Your simulation tools should give you some trial-and-error sweep features, as you would find in a parametric sweep with a SPICE package. As you design, simulate, and analyze your system, you create an iterative workflow that helps you identify problems and correct them before beginning fabrication runs. 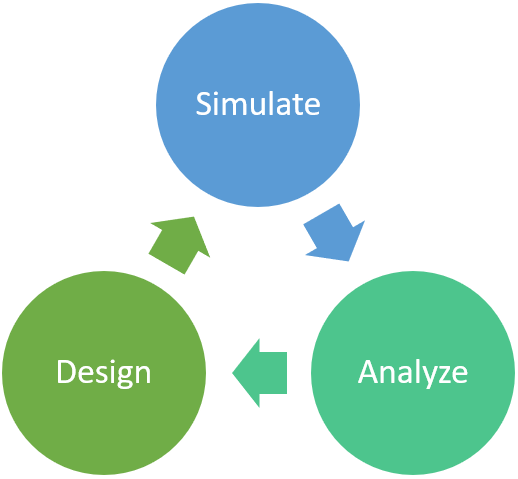 There are two types of virtual prototyping simulations that you should perform during the design phase: circuit-level and system-level. These simulations begin at a granular level, focusing on electrical behavior in individual circuits. At the system level, interactions between multiple portions of a system are examined as well as phenomena in a system that are non-specific to different circuits or electronic components. One great example is mechanical simulations, which include drop testing, vibration simulation and analysis, and fatigue testing.

A circuit-level simulation generally focuses on individual circuit blocks in SPICE simulations or logic simulations. Modern CAD tools with built-in SPICE packages make this type of simulation methodology easy, as you can inspect individual circuits or groups of circuits in your design. Your focus should be on functionality within a circuit block, specifically that the circuit outputs at the desired level, frequency/phase, and other characteristics such as transient response. Component reliability can also be examined in circuit simulations, where electrical values can be compared to component ratings and points of failure can be identified early.

Once you’ve created a PCB layout for a complex system, including a system with mechanical and signal integrity constraints, you can use post-layout simulation and modeling tools to evaluate its behavior and function. This requires different types of software applications:

These simulation tools fall into two categories: signal integrity and power integrity. Your signal integrity tools are used to calculate metrics like interconnect impedance, reflections along an interconnect, crosstalk, return paths, skew/trace length matching, and other important values. These simulation tools are typically field solvers in that they take data directly from a PCB layout and your schematics, but they are not full-wave EM solvers.

Power integrity simulations also use EM field solvers in your layout data, but they focus on electromagnetic behavior on the PDN. Your goal in these simulations is to ensure that your components always receive stable power. The results you see from these simulations can help you determine if ground potential shifts (i.e., ground bounce) or ripple on the power bus will exceed allowed limits and create signal problems. The best simulation tools will use models that couple signal and power behavior in a single application.

Some might simply call this 3D modeling, but it is still an important part of virtual prototyping. Before other physical aspects of the system have been examined in simulations, the product should be examined in terms of its mechanical design and fit to its enclosure. Virtual assembly is the first step in more complex virtual prototyping tasks, as it takes a 3D view of the form and fit of physical components. This gives a design team one last opportunity to modify the physical design before putting the prototype through more advanced simulations. 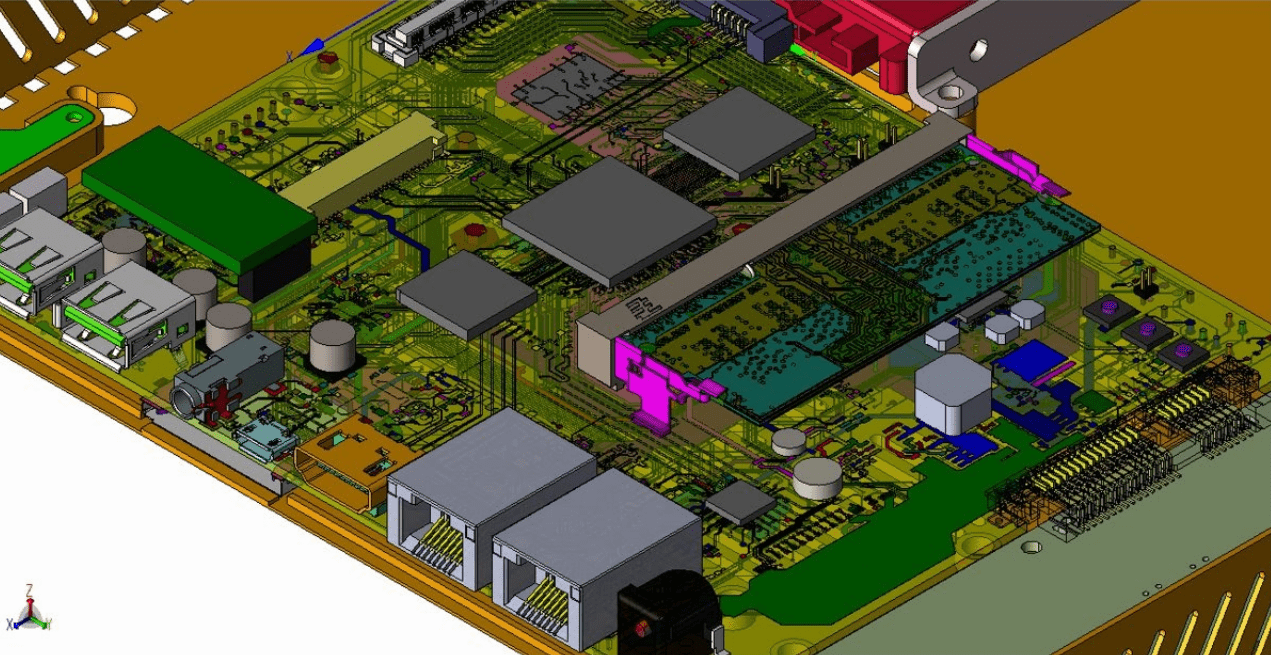 3D mechanical view of a PCB layout in its enclosure

These simulations require examining how electromagnetic waves are emitted from your PCB as it operates. Switching components, analog components, antennas, and other elements emit some radiation as they operate. This emitted radiation can create a complex electromagnetic environment around a PCB that is responsible for noise coupling throughout your system. Important signal integrity and EMI insights in noise-sensitive systems and RF systems can often be gathered using full-wave field solvers. These simulations provide an opportunity to identify major sources of EMI in a system before a prototype is put into EMC testing. 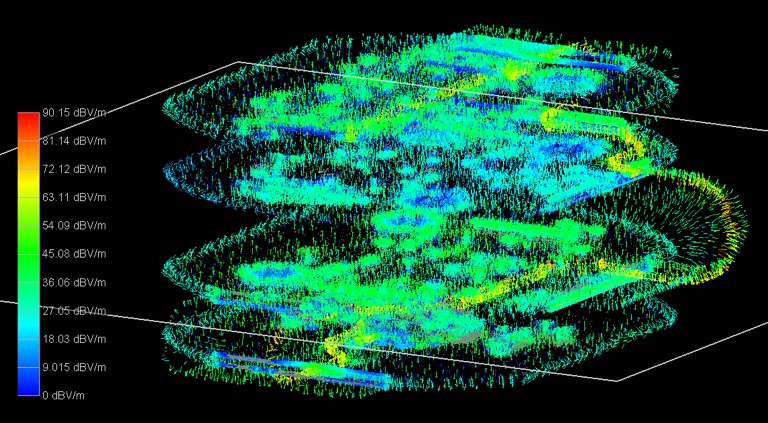 Multiphysics simulations can be used to examine how different physical phenomena couple to each other in a complex system, including IC packages and a PCB. Multiple aspects of system behavior can be examined with these simulations, including things like heat transport through airflow (CFD simulations) alongside thermomechanical stress while a component is in operation. A 3D multiphysics field solver is used to build up these simulations and examine interactions between physical phenomena, as shown in the example with an IC package below. 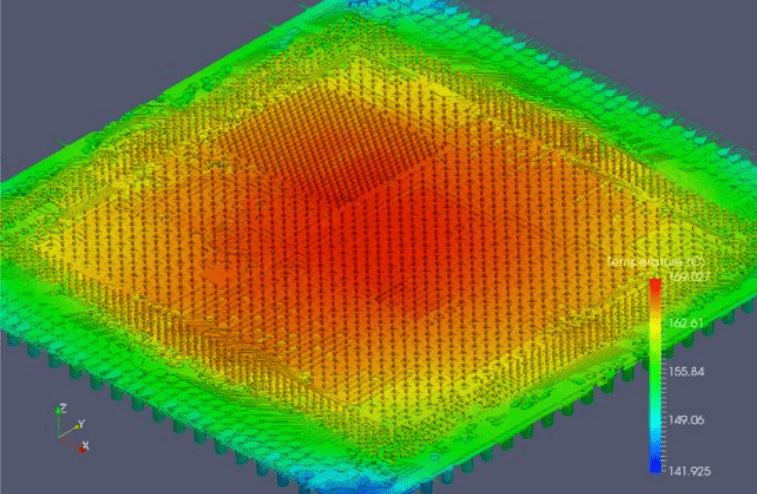 The common thread among these simulation packages is the need to take data from your layout and build a numerical model for use in your simulations. With the right design and analysis tools, you’ll have everything you need to create a pre-layout and post-layout simulation workflow.

When you need to design your circuits and simulate their behavior in a virtual prototyping methodology, PCB design and analysis software help make this process easy. The front-end design features from Cadence integrate with the powerful PSpice Simulator to create the ideal system for circuit design and evaluation. Once you’ve created a PCB layout, Cadence has a suite of SI/PI Analysis Point Tools for post-layout verification and simulation. You’ll have access to a full suite of design and optimization features.