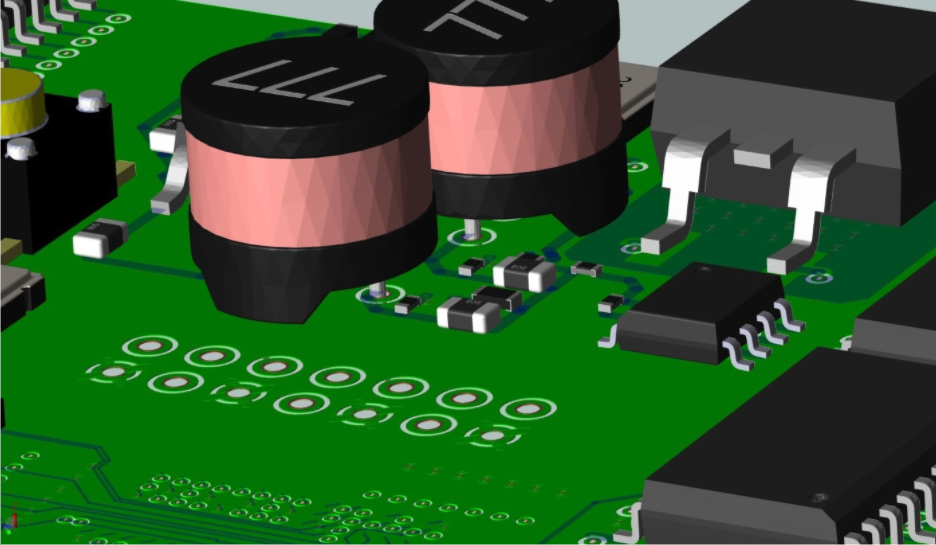 An internal PCB ground plane with top-mounted components and traces.

My first experience debugging an electrical ground was trying to figure out why the lights on our motorcycle trailer kept blinking. I figured something was wrong with the bulbs, but my father patiently explained to me the necessity of a robust ground connection to complete the circuit. As it turns out, relying on the metal of the trailer hitch for a ground connection was not the best plan, and with the simple addition of a ground wire to the connector, the problem was fixed.

Providing a good grounding system for a printed circuit board is perhaps one of the most important aspects of a PCB layout. There are digital, analog, chassis, and earth grounds, and their functions are all important to the overall performance of the board. The ground system in a circuit board will do everything from holding a steady reference level to providing a clear return path for signals and current.

We’re going to take a look at single-point vs. multipoint grounding in PCB designs and what you need to know when connecting the grounds in your next layout. Single-Point vs. Multipoint Grounding—Which Is Which?

There are many different grounds that can be used on a printed circuit board and one of the most common examples is digital ground and analog ground in a mixed-signal board. The grounds will need to be connected and how this is done depends on whether or not your design needs single-point or multipoint grounding. Let’s explore these two types.

Circuit boards with their different grounds physically separated from each other are referred to as single-point or “star” grounding. This approach is usually used in lower frequency applications and has one point on the board where the grounds are all tied together. In the case of a split ground plane, the digital and analog ground planes would be tied together at one point between the splits.

This grounding strategy is used for circuit boards that operate at higher frequencies. Instead of each ground circuit having its own connection on a plane that ultimately ties together at one point, all of the ground connections share the same plane. The different circuits are all connected to one reference ground plane through low impedance connections. The shortened connections help to reduce the EMI that can be created at higher frequencies.

Single-point grounding systems operate better at lower frequencies while multipoint systems work better at higher frequencies. In many cases, there are mixtures of single-point and multipoint grounding in the power delivery network of the board. There are some important points to how the grounding system is connected, though, that must be kept in mind in order to avoid problems, and we’ll look at that next. 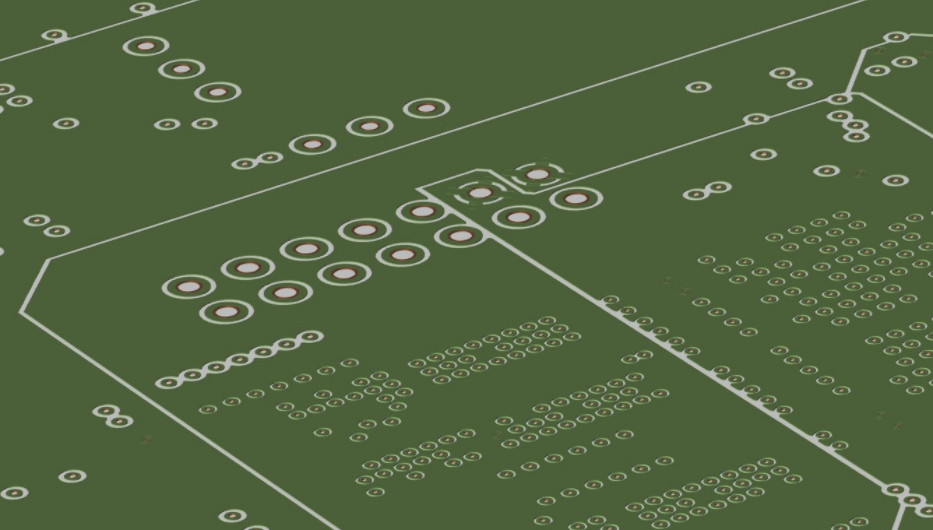 A split plane set up on a circuit board.

A single-point grounding system can create a problem if all of the return currents flow through the single point. This can interfere with the normal flow of high-frequency currents throughout the ground plane and, in turn, radiate EMI. In many cases, it is better for the different circuits to share the ground plane and provide a different return path on another layer of the board. It is also important to keep the signals close to their return paths to reduce the magnetic loops that they will cause.

Another problem with separating the plane is that it can cause ground current loops. By embedding traces or splitting the plane, you may block the return path and inadvertently create the loop. It is better to keep the ground plane whole and avoid creating situations that can block the return paths, such as high-density areas of vias, slots, or other plane obstacles. If there are to be separate digital and analog ground planes, it is often recommended that they be on separate layers of the board that don’t overlap to help minimize capacitive coupling between the two.

In PCB design, it is normal to look at all of the unrouted nets on the board and give trace routing the highest priority in your workflow. But, in reality, each signal has a return path that must come back to the source through the reference plane. If the ground plane has not been designed correctly to conduct those return paths, then the performance of the signal will be at risk. It is imperative, therefore, for layout engineers to consider both the routing and the grounding of the design together.

A single trace that is incorrectly routed can cause problems for that one signal, while a poorly designed ground strategy can risk the operation of the whole board. Having said that, let’s look next at some best practices for designing a ground plane. 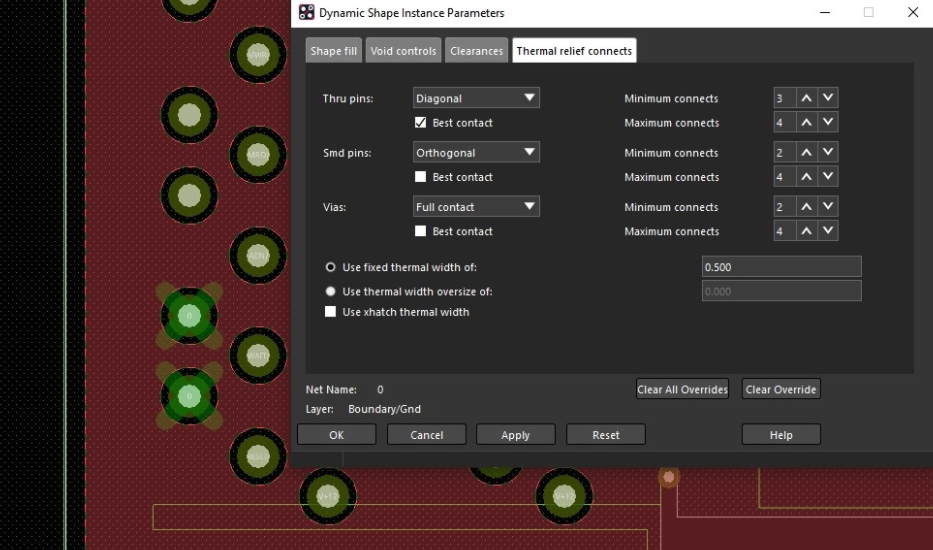 Before layout can even begin, the board will have to be set up with all of the correct parameters and settings. Part of this process is to set up the layer stackup configuration for the board by weighing the manufacturing costs against the routing density and signal integrity requirements of the board. Sensitive signals will require a stripline layer configuration, there may be multiple voltage supplies that have to be routed, and as we have discussed, the grounding of the board will also be a factor.

As the board is being laid out, the strategy for creating the ground planes will need to be decided on. Usually, ground planes are created through a process called pouring copper. The designer will draw the outline of the plane, and the system will form the plane based on the parameters that have been set up for it. In the picture above, you can see an example of these parameters in the Dynamic Shape Instance Parameters menu in Allegro PCB Editor. Thermal relief connections are being set up, and there are additional tabs for setting up clearances, voids, and fill patterns of the plane. These parameters can also be changed on existing planes, which is very helpful in creating split planes when you need different parameters between the two.

With the plane strategy in place, the designer can proceed with the trace routing. Here are some basic rules to remember while routing traces that are coupled with a reference ground plane:

There are plenty of rules that a designer needs to follow in order to design a circuit board with a good single-point or multipoint grounding system. Fortunately, the PCB design tools that you are using have a lot of functionality built into them to help.

The Constraint Manager in Allegro showing the parameters set up for a power net.

Setting up Your Design Tools for Ground Plane Generation

As we mentioned earlier, the ability to control how a ground plane will be created or altered is easily done using the Dynamic Shape Instance Parameters menu. There are other aspects of power and ground nets, though, that need to be controlled as well. These include the trace width and spacing used during routing as well as what type of vias will be used. The Constraint Manager in Allegro gives designers the ability to set up all of these different parameters.

As you can see in the picture above, ground and power nets have been grouped together in a net class where their different parameters can be easily controlled. Using a spreadsheet-style interface, the Constraint Manager gives the user complete control over nets, components, and many other aspects of the board from electrical attributes to manufacturing rules. The Constraint Manager can import or export its rules, making it easy to quickly set up the constraints for a new design by leveraging existing rules from another design.

In addition, Cadence gives its users plenty of other features to help with the design process. IPC-2581 is a bi-directional interface that can receive board layer stackup and other design parameters set up by a PCB manufacturer and then send out completed manufacturing files and information.

Cadence has included many other helpful features in Allegro that can help with the design of your PCB grounding system. You can learn more about designing a robust power delivery network in this E-book.