It is well known that two can be better than one, as combining resources usually brings about a better result. There’s an old proverb that affirms these benefits: “If either of the two falls down, the other can help them back up”. Even poker recognizes the strength of two by usually requiring a pair of jacks or better to open the hand with. And in electronics, we also see this rule of two at work with differential pair routing being used instead of a single trace.

Routing diff pairs can be difficult though, as they have specific rules that must be followed in order to ensure the performance of the signal. These rules dictate details such as the diff pair’s trace widths and spacings, as well as many other aspects such as how the traces are routed together on a circuit board. Even the fact that the designer has to route two separate traces for each signal can have a big impact on how the rest of the board is routed if there are a lot of diff pairs in use. Let’s take a closer look at diff pair routing and some of the potential problems that you need to be aware of in this summary of differential pair routing guidelines. The Basics of Differential Pairs in PCB Design

Before we start looking at the potential difficulties and solutions of differential pair routing, let’s take a moment to review the basics. If you are involved in PCB layout, then you are already familiar with single-ended signaling, even if you haven’t heard that exact term used before. Single-ended signaling is transmitting a signal on a trace and then using a common reference for the signal’s return path. When we route a bunch of traces on the board and the ground plane provides the path for the signal returns, that is single-ended signaling. This is how the majority of PCB nets are routed.

However, there is a catch to this type of routing: as transmission line speeds increase, single-ended signaling can be victimized by some problems, including the noise of cross-talk and electromagnetic interference (EMI). Here is where differential signaling can help.

Differential signaling uses two complementary signals to transmit the one data signal, but the second signal is inverted from the first. The signal receiver uses the difference between the inverted and non-inverted signals to decipher the information. Using differential pair routing to transmit signals has some important benefits, starting with a reduction in noise and EMI:

Diff pairs also have another advantage over single-ended signaling in that they can operate at lower voltages. A single trace must operate at a higher voltage to ensure that its signal-to-noise ratio (SNR) is enough to resist any incoming noise. Since the diff pair is more immune to noise, it requires less voltage, which provides some additional benefits:

As you can see, there are a number of benefits to using differential signaling on a circuit board, but there are also some costs to consider as well.

The Problems Associated with Diff Pairs in PCB Layout

There are a lot of benefits to using differential pair routing as we have just seen, but there are some drawbacks as well. The first and most obvious problem is that you have to route two traces for each signal. Not only does this double up the amount of routing on the circuit board, but with the additional rules in place for diff pairs, it can take up even more space. Let’s look at some of the diff pair difficulties that designers have to contend with.

One of the big advantages of diff pairs is that noise and EMI are canceled out by having the signal represented by two equal signals of different polarity. But if the lines aren’t equal in length, this equilibrium can be destroyed and may in turn create common-mode noise and significant EMI problems. The greater the rise and fall times of the signal, the worse the problem can be if the lines are of unequal length.

The pair will couple better with each other the closer the traces are. However, when the spacing of the traces changes, so does the differential impedance resulting in a mismatch and additional potential for noise and EMI. To prevent this, the pairs must be routed together and at the same widths, which can be a problem when routing around obstacles on the circuit board such as vias or smaller components.

To get the best performance out of diff pair routing, there are a few basic rules that need to be followed, which we will discuss next. 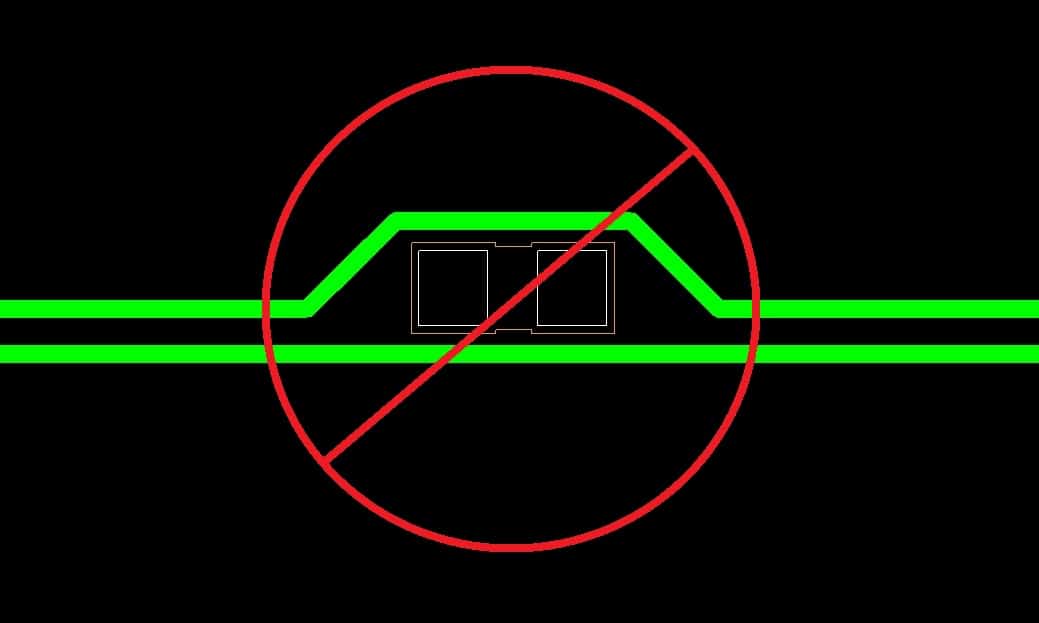 To get the best signal performance and integrity on your circuit board, here are some differential pair routing guidelines that PCB designers should give attention to:

The two traces of the pair need to be clearly identified as a diff pair for the layout team so that they are routed together across the entire length of the signal.

A successful diff pair should result in the lines closely mirroring each other. To do that, consider these ideas as you route:

As discussed previously, the lengths of the two lines in the pair must be the same length. To achieve this, you may have to put small sections of trace tuning into the shorter line to equalize them. Although this will alter the symmetry of the lines slightly, the length is more important. If the unequal lengths are because of non-symmetrical pad locations, try to add your trace tuning in this area of the lines.

Although there is a lot to remember when routing diff pairs, your PCB design CAD tools typically have a lot of capabilities to help you configure the layout for diff pair routing. 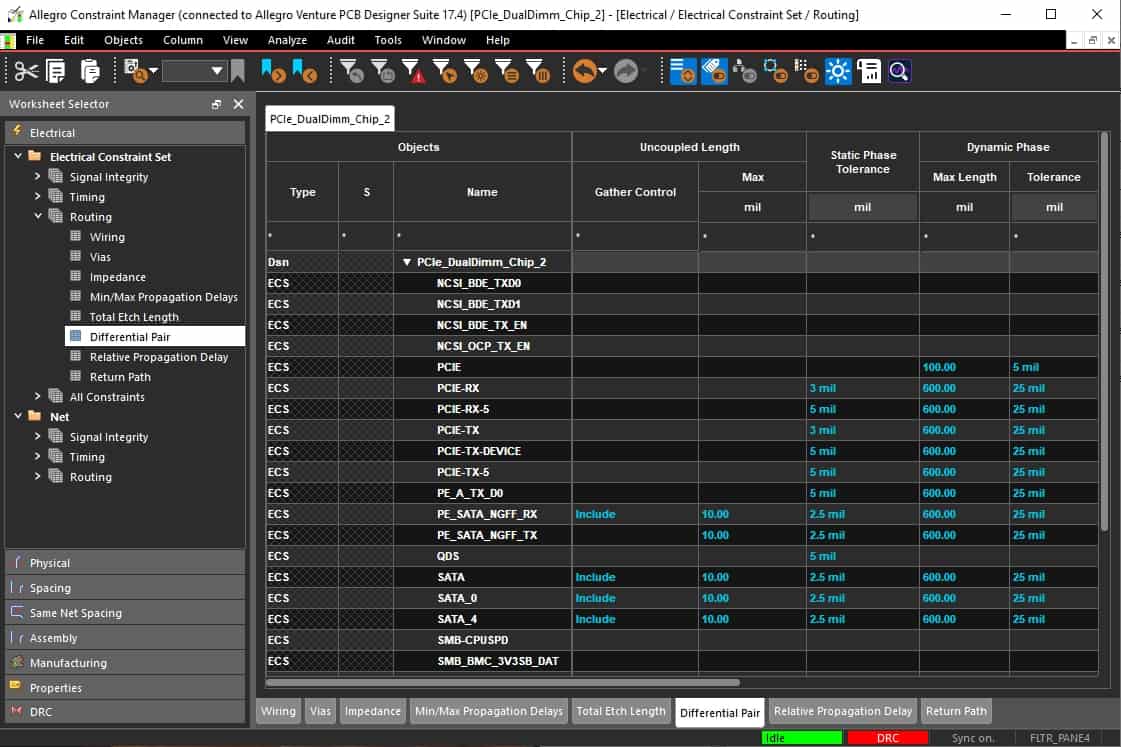 At one time, PCB layout designers would have to route differential pairs manually. This required a lot of effort to ensure that the lines maintained their symmetry, and altering the traces after they were routed was a nightmare. Thankfully, tools like Cadence’s Allegro PCB Editor have automated diff-pair routing tools that maintain the proper widths and spacings of the pair while they are being routed. In addition, there are rules and constraints that can be added to govern all aspects of the differential pair.

In the picture above, you can see the Constraint Manager used in Cadence’s PCB layout tools to manage the different design rules including the diff pairs. These rules include the width of the traces and their spaces, how long the traces are permitted to meander, and the topography of routing including how the pad enters and exits. By using tools like these, you can enter all of the pertinent rules for your differential pairs to ensure that they will be compliant with the needs of your circuitry.

For more information on differential pair routing guidelines and high-speed PCB design, take a look at this E-book.