As I was scrolling through videos on Facebook, I came across one where a kid solved a Rubik's cube in 7 seconds. It brought back memories of my similar attempts as a kid. While I could solve for one side after some struggle, I never made it as far as getting all the sides right.

There seem to be specific techniques for how to move the cube according to the patterns you see on it. Without those techniques, the difference between solving for one side and six sides is very different. These differences are like the linearity of working with DC voltage vs. the complexity of the AC voltage. Despite AC voltage being more complex, this article will guide you to a better understanding.

So, What Is AC Voltage?

The difference in potential between the positive and negative terminal is expressed in volts. Thus, the term AC voltage is used to determine the value of the potential difference between terminals where alternating current flows. 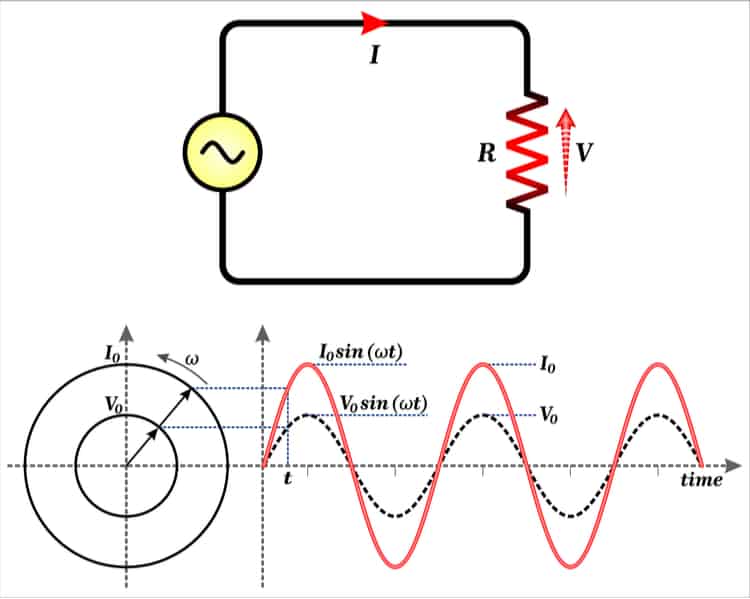 An AC source powering a load.

When plotted on a chart, AC voltage takes the shape of a sine wave. In one cycle, the AC voltage starts from 0V, rises to its peak, passes back through 0V to its negative peak, and rises back to 0V. As the AC voltage value varies throughout the cycle, it is expressed in its peak (Vpeak) and root-mean-square values (Vrms).

Vpeak refers to the maximum amplitude of the sinusoidal waveform, while Vrms is derived via the following formula:

Vrms is also identified as Vac. It represents the equivalent voltage delivered by DC. In the US, the mains delivers 120 Vac while the UK uses 230 Vac.

How Is AC Voltage Generated? 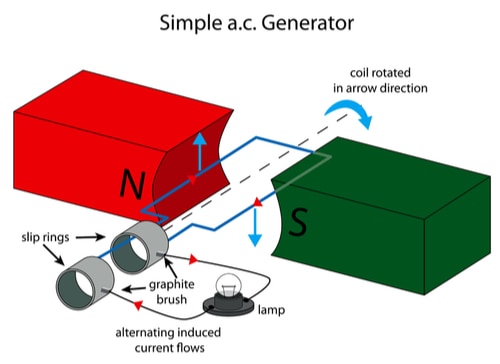 AC voltage is made possible thanks to Faraday’s Law of Induction. The law specifies how electric currents can be induced in a moving coil as it cuts through magnetic flux at the right angle. The current change is proportional to the rate of change in magnetic flux.

AC alternators or generators are components built based on Faraday’s Law. They involve rotating a loop of conductors across a magnetic field. As the loop cuts through the magnetic field, the current starts to flow in one direction and it reaches the maximum when the loop is perpendicular to the magnetic field.

How Resistors, Capacitors, and Inductors Work with AC Voltage 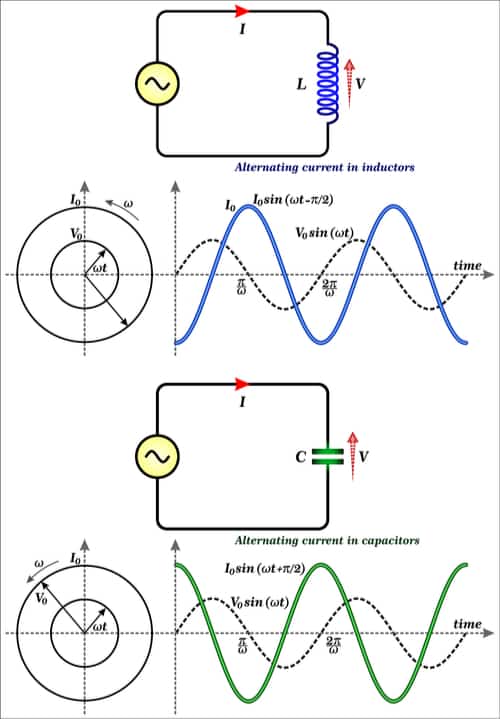 AC in inductors and capacitors.

Just like the difference in solving a single side vs. six sides of the Rubik’s cube, circuit analysis involving resistors, capacitors, and inductors becomes more complicated with AC. Unlike with DC voltages, the behaviors of these components are no longer simple when used with AC voltages.

The measurement for resistors is expressed as impedance (Z) in AC circuits, instead of resistance (R) for DC circuits. There is no difference to the resistive value, regardless of the amplitude or frequency of the AC voltage. The terminology difference exists because of how the phasor difference is considered when expressing resistance as a function of voltage and current.

What’s more interesting is the behavior of capacitors and inductors when AC voltage is applied. These components behave like an open and short circuit, respectively, with a DC source, but that all changes with AC. Capacitors store and release the charge as AC voltage rises and decreases from its peaks. This behavior causes the voltage to lag the current by 90 degrees.

When operating with AC voltage, the resistive property of a capacitor is defined as capacitive reactance, which has the formula:

Given that AC voltage increases the complexity of circuit analysis, it helps to use a PCB design and analysis software that’s capable of pre-calculating complex circuit parameters. OrCAD’s Mixed-Signal simulation tool allows you to analyze the behavior of the circuit when the AC voltage is applied. Having these tools at your disposal in the design process can increase the quality and reliability of your designs and help to make sure you get them right the first time.