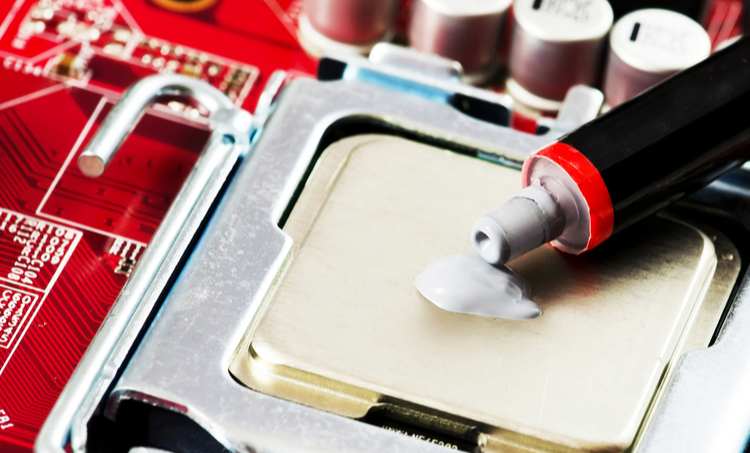 Applying thermal paste to a CPU on a PCBA

Is it not funny that during the midst of the winter almost nothing compares to a warm fire? The opposite also appears to be true. On a sweltering day, a dip in the pool is a small slice of utopia. I suppose coolness can only be fully appreciated when it is used to mitigate heat and vice versa. Of course, there are many ways to mitigate the temperature of your body with respect to the current environmental temperature in which you may find yourself. And the particular heat transfer facilitator selected determines whether your body endures temporary inconvenience or is exposed to more dangerous risks; such as hyperthermia or heat stroke.

Controlling temperature or the flow of  heat is also important on circuit boards. This is true for manufacturing as well as operation. Regardless of whether your board uses through hole components and/or the more compact and increasingly more implemented surface mount technologies (SMTs), the soldering process is dependent upon temperature change and heat transfer.

For components, one of the greatest concerns is removing heat or thermal dissipation. Although heat sinks, pads and vias are included for this purpose, often thermal paste is used, as well. Let’s take a look at why and when is thermal paste needed to facilitate heat transfer for your design. This question is easier to answer by first understanding what thermal paste is and how it is used during PCB assembly. What is Thermal Paste?

The most generic definition for thermal paste is that it is a paste chemically constructed to allow for heat transfer. Its composition is a liquid polymer, that may include urethanes, acrylates, silicones and epoxies. The most typical function for thermal paste is as a filler between two surfaces to provide a solid interface and increase the volume of heat transfer between the surfaces.

With this primary function it may be surprising that the heat transfer rate may range from approximately 3W/(m·K) to 13W/(m·K) for non-metallic pastes, which is far below the 385W/(m·K) for 99% pure copper. However, metallic pastes may have thermal conductivities as high as 70W/(m·K). Although these may not seem impressive, thermal conductivity is not the only consideration when using thermal paste during PCB assembly.

Why is Thermal Paste Used for PCB Assembly?

It is well-known that the removal of excess heat from components or parts that tend to generate high temperatures is critical during electronics operation. Heat sinks that can have thermal conductivities greater than 200W/(m·K), are common for these components, which include CPUs, GPUs, power transistors and other high-performance semiconductor-based devices.

During operation, the greatest source of heat on circuits boards is generation by components. And the heat removal techniques implemented are done so during PCB assembly. However, the assembly process itself introduces heat to the board, which also should be a design consideration. There are two heat transfer issues, dissipation and distribution.

Just as during operation, excessive heat can build up in and around components during assembly.
Without a means of effectively removing this heat from the board, parts or the PCB itself could
be damaged or become weakened and threaten component reliability once deployed.

If your board contains through-hole components, then most likely a form of wave soldering will be used to secure them to the PCB. For surface mount technology, reflow ovens which raise the board temperature for substantial intervals (several minutes, in some cases) are used as part of the soldering process. In order to make the best connections, the solder flow requires that the temperature be constant and heat be evenly distributed

As shown above, heat transfer considerations during assembly include ensuring that the board maintains a thermal profile that aids the PCB soldering process in addition to efficient removal.

To be most effective, thermal paste should fill in all of the gaps between the two surfaces at which it is applied. Additionally, it is desirable that the paste not conduct electricity away from the component. Another important consideration is operational lifetime. For thermal pastes, typical ranges are 3-5 years, which means that for many components it may need to be replaced. All of these factors must be considered if it is determined that thermal paste should be utilized for your design.

Is Thermal Paste Needed for Your Design’s Manufacturing?

Now that we know why and how thermal paste is used for PCBA, the next determination is when it's needed for your designs. To help you make this determination, the following checklist is provided.

How to Determine if Thermal Paste is Necessary for Your Design

✅    Does your board include other power components (e.g. power amplifiers)?

✅    Does your board include a power supply?

✅    Is your PCB layout densely populated?

If you can check off any of the items listed above, then your board may benefit from the use of thermal paste to aid your other heat transfer devices; such as heat sinks, thermal pads and vias. The best way to make this determination is by incorporating thermal analysis into your board design, as shown in the figure below.

With Cadence’s comprehensive PCB Design and Analysis package anchored by Allegro PCB Designer you can perform thermal synthesis; such as power distribution network (PDN) design and identify hot spots. And by employing the Celsius Thermal Solver you can incorporate electrical-thermal co-simulation to evaluate distribution and dissipation profiles for components and the PCBA.