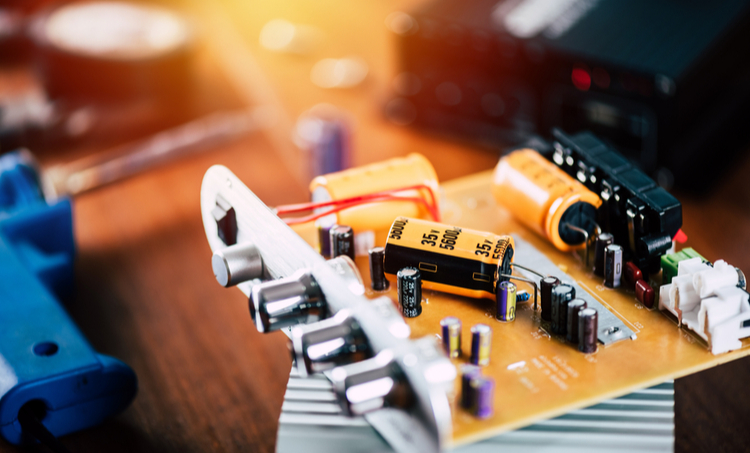 When designing this type of amplifier, you’ll need to determine the gain-bandwidth product, also known as unity-gain bandwidth.

Designing amplifier circuits can be difficult as there are many important parameters to consider. Everything from values of passives to the material parameters for transistors will determine the available gain and bandwidth of the amplifier. While you could calculate things like maximum gain and bandwidth from first principles, there are some easier ways to quantify how your amplifier circuit will behave.

When designing AC amplifiers, one important parameter is the unity-gain bandwidth, which is related to the gain-bandwidth product. This important parameter nicely summarizes the AC performance of an amplifier while accounting for the inverse relationship between gain and bandwidth. If you’re designing an amplifier circuit and you’re performing circuit simulations, you can extract the unity-gain bandwidth from your results with the right set of circuit analysis tools. In this op-amp, we source a sinusoidal signal with a given frequency. The signal frequency that gives AOL = 1 is the unity-gain bandwidth for this op-amp.

At some point, as we increase the frequency seen at the differential input, the open-loop gain will drop down to 1. This frequency is referred to as the unity-gain bandwidth. Note that this definition assumes we are using the standard definition for bandwidth, which carries its own nuances.

Amplifiers for AC applications, such as RF amplifiers, need to be designed to accommodate a specific range of signals, which is often called a circuit’s bandwidth. The term “bandwidth” can be a bit confusing at first, especially to non-engineers. Essentially, the bandwidth of a component refers to the range of frequencies at which the component must operate. In terms of signals, the bandwidth refers to the entire spectral range that the signal occupies. For signals composed of discrete harmonics (e.g., a digital signal), the bandwidth can be infinite, so we have to cut off the bandwidth at some limiting frequency. The same applies to amplifiers; an amplifier can accept any frequency, but its gain will approach zero as the frequency approaches infinity.

What Determines the Unity-Gain Bandwidth?

A number of factors contribute to the unity-gain bandwidth:

For the first two points above, the real bandwidth of an amplifier can be modified by placing reactive component filters in the feedback loop and on the inputs, which will act as filters. For example, placing a high-pass filter on the input moves the lower edge of the bandwidth away from DC and up to higher frequencies.

The latter two points above regarding parasitics are equivalent to the first two points. Parasitics in the PCB layout or component packaging simply add some reactivity to the circuit’s transfer function. These effects don’t become obvious until we get to very high frequencies (mmWave), but they will become more important as more devices start regularly operating in this range. The same can be said for the structure of semiconductor elements, which have their own parasitics (e.g., gate capacitance in a MOSFET). 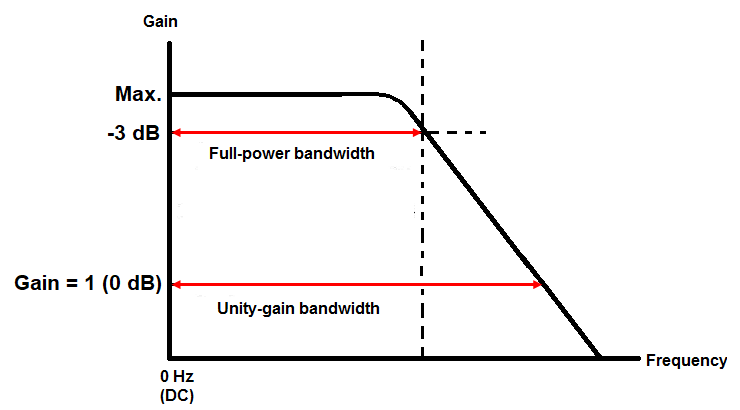 Example gain spectrum for an op-amp showing the unity-gain bandwidth.

Designing and simulating amplifier circuits can be complicated, but the right set of PCB design and analysis software helps make this process easy. The front-end design features from Cadence integrate with the powerful PSpice Simulator, giving you the tools you need to calculate important metrics for amplifier performance, including unity-gain bandwidth. Once you’ve created a PCB layout, Cadence has a suite of SI/PI Analysis Point Tools for post-layout verification and simulation. You’ll have access to a full suite of design and optimization features.