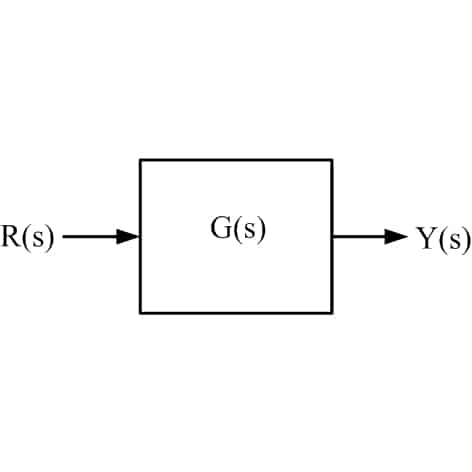 Let’s define the transfer function gain with an example: consider kicking a ball with your palm and bouncing it back and forth. The height to which the ball bounces up and the hand kick we apply share a certain relation. Mathematically, the relationship can be defined as the ratio of height to which the ball bounces to the force of the kick given and symbolizes the transfer function gain at the steady-state condition.

Consider a linear system with input r(t) and output y(t). The output settles to a steady state after transients. Let R(s) and Y(s) be the Laplace transform of the input and output, respectively. Let G(s) be the open-loop transfer function of the system. Provided the initial conditions are zero, the equation is:

The transfer function gain can be defined as the ratio of y(t) at steady-state, represented by

The output y(t) is bounded for bounded input r(t). Now we will find the steady-state output Yss(s) using the final value theorem:

Let’s say R(s) is a step input equal to

. Substituting in equation (6), it is reduced to:

The transfer function gain is obtained as K, substituting s=0.

So the transfer function is given in the form:

where N(s) and D(s) are the numerator and denominator polynomials respectively. K represents the transfer function gain, irrespective of the order of the function.

Every control system designer aims for a stable system, since stability is an important factor for a system to behave as expected. For high efficiency and cost-effectiveness, in some scenarios, we need to pull the system operation up to saturation regions or non-linearities. In such systems, the relative stability is a significant parameter. The relative stability is the measure of how close the system is to instability. It is usually defined using gain margin and phase margin.

The gain margin is usually expressed in decibels:

The Routh Hurwitz criteria and Bode plots can be utilized for finding the gain margin of a stable system.

When you are designing a control system, stability is of prime importance. If you know the transfer function gain of the system, calculating the gain margin is an easy way to check for relative stability. The Bode plots and Routh Hurwitz are some methods to find out the gain margin. The Cadence Design tools can be utilized for plotting frequency response from which the stability can be analyzed. PSpice offers the best simulation tools available to plot the Bode and frequency curves.