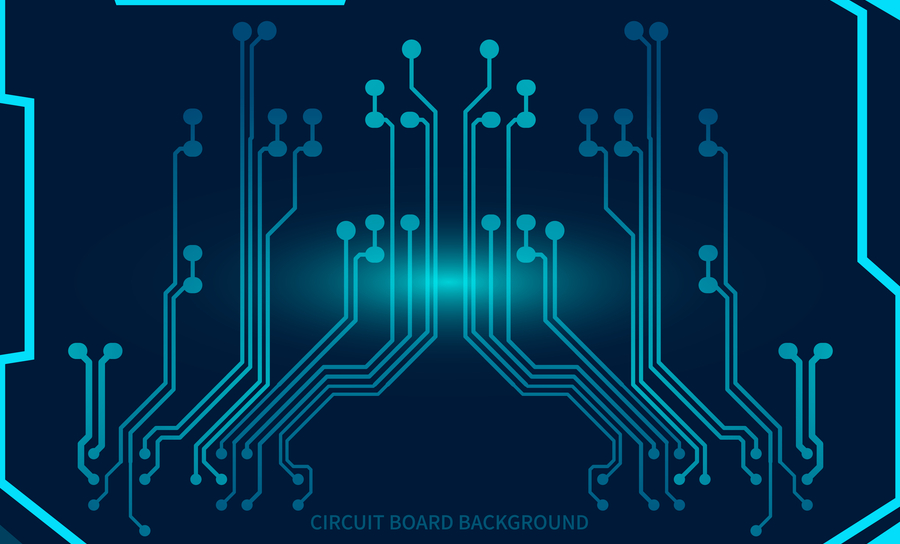 Growing up, like most young boys, I enjoyed watching planes and air shows, learning about airplanes, and building (model) planes. However, my favorite phrase back then was, “It's a bird, it's a plane, it’s Superman.” So, it is safe to say that I have always had a fascination with flight.

However, there are other planes that do not involve flight. These different planes refer to theories on reality, such as planes of existence, and other planes refer to both power and ground. The latter is of particular interest because of their importance to PCB design, functionality, and performance.

Over the next paragraphs, we will discuss planes (not air), designs, and current density as we cover the importance, they all have in common.

What is Current Density?

In the field of electromagnetism, Current Density is the measurement of electric current (charge flow in amperes) per unit area of cross-section (m2). Also, this is a vector quantity, with both a magnitude and a direction. Furthermore, we measure the electric current density in amperes per square meter.

As important as the current density of a PCB is, this is still one area of design that does not get enough attention. For me, the balloon analogy always puts the parameters of current density into perspective. I guess it is because the current density in a PCB trace is much like the pressure in a balloon. You want to fit as much air into that balloon as possible, but if you overfill it: pop!

Well, the same is true of PCB traces in most cases. We want to design our traces to be as small as possible and yet carry the most current possible. However, like the balloon, if we overload the traces with too much current: boom. Though for a PCB, that boom doesn’t just frighten some unsuspecting children at a birthday party. This boom most likely means that the trace and other board components are toast. In other words, PCB failure. 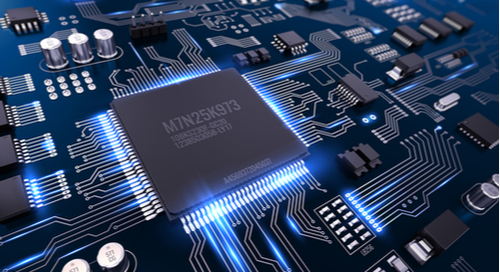 It might seem cool that your circuit board is glowing without LEDs but, we assure you, it should not be.

Before designing or laying your PCB out, it is standard to perform a circuit analysis to confirm that the networks of the system have the proper operational parameters. We want to make sure that the voltage drops, current flows, and impedances meet our objectives.

Now, after these are confirmed, we progress to the actual PCB design phase with confidence that the system will perform as intended. However, there are other aspects to consider once we transition to the PCB design. One of those considerations is, you guessed it, current density.

Plane current density is one of the more essential capabilities of our power delivery network traces. In summary, traces without enough current will cause misconstrued signals, and those with too much will cause detrimental consequences, including PCB failure. However, if you know the current densities of the traces, you can ensure that the current is between these two extremes.

How to Measure (Plane) Current Density

In general, PCB plane current density quantifies how much current or electric charge is flowing through the trace or via. This is, of course, a critical quantity because each material type has a limiting amount of current that it can carry. Furthermore, this refers to the ampacity, which is the highest level of current a conductor can safely carry before deterioration of the conductor takes place.

Also, as I am sure you are aware, the movement of current through a conductor produces heat. This heat, in turn, dissipates into the adjacent areas and is depicted as a power-delivery loss proportional to the resistance of the conductor. Also, the formula for calculating power delivery loss is as follows:

Overall, being able to calculate PCB current density will afford you a better understanding of the power delivery capacities for your PCB. Furthermore, it will also allow you to formulate designs that avoid potential power failures. Although you could just accept the inevitable destructive shortages and smoking boards, by not correctly checking your current density. All jokes aside, checking and confirming current density, undoubtedly, saves you time, reduces cost, and improves reliability as well as design.

I eluded to this earlier that current density levels need to be within tolerance to promote proper PCB functionality. Another analogy that may put this into perspective is the human blood pressure. I believe it is appropriate here because firstly, blood is to humans as current is to a PCB. Secondly, blood pressure is to humans as current density is to a PCB.

In summary, if your blood pressure is too high, you could have a stroke, i.e., human body failure. If your current density is too high, PCB failure. Well, you get the correlation.

Therefore, if you have a current density that exceeds an area's parameters, this will lead to a catastrophic failure. Although it is possible to calculate these parameters manually, it would be both tedious and challenging. Firstly, there are considerations that contribute to the challenging aspects of such an undertaking.

The considerations that make manual current density parameter calculations unwise are numerous. For example, fanouts where current flow distributes among several lines and trace corners. Other factors include induced current from nearby conductors or devices that also have an immense amount of variables and hard-to-calculate areas. In other words, the more variables in your calculations and design, the higher the possibility for errors. 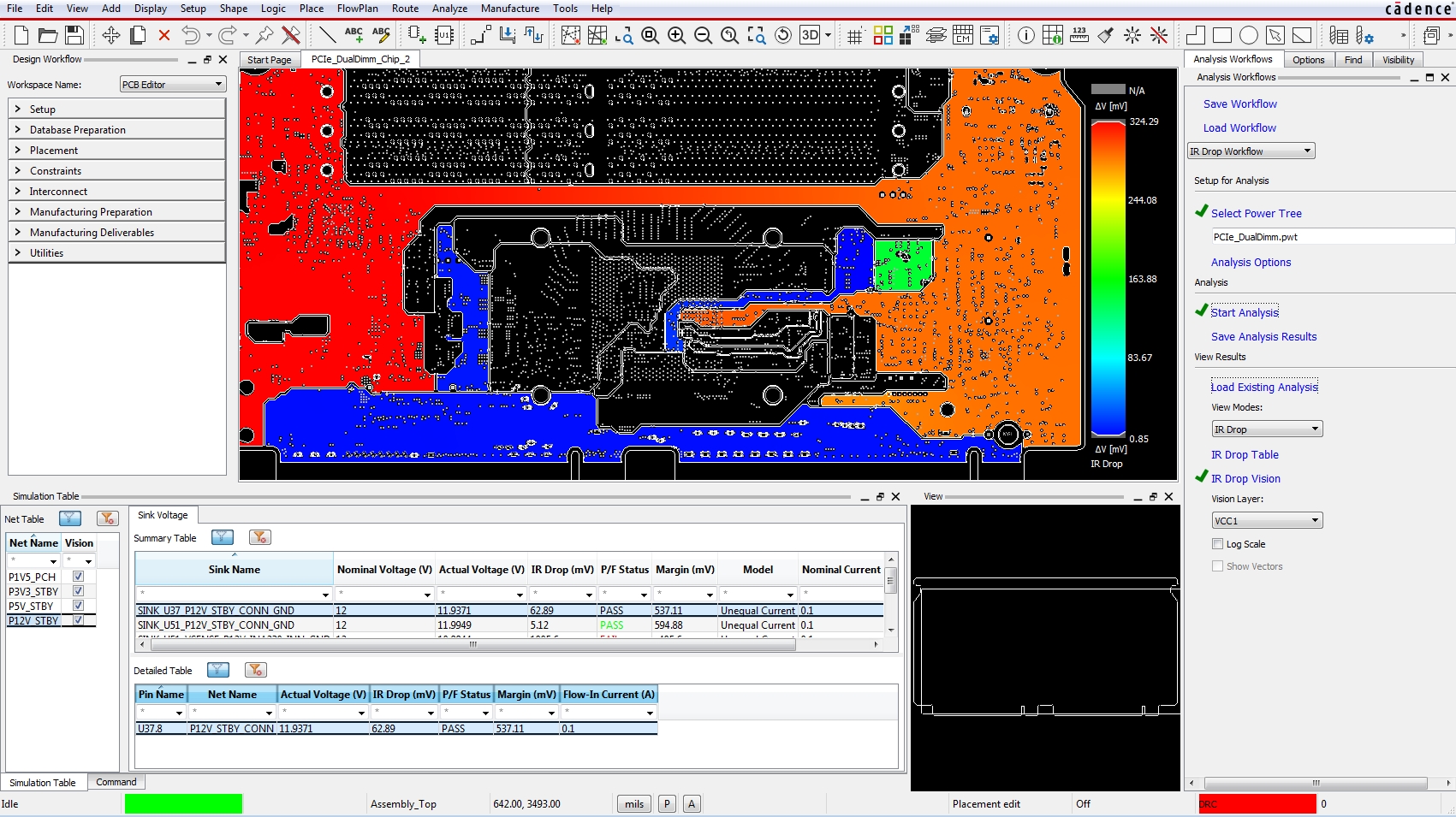 Using proper simulation can make even the most dense boards easily understandable.

However, to avoid those possible errors, we still need accurate checks of our voltages and currents for all traces before passing the board to manufacturing. So, how do we achieve the accuracy we require and the efficiency our design demands?

The answer is simple; we use analyzers and simulation within our PCB design software. Through simulation, you will be able to run tests on your current flow distribution and gain a better understanding of where the potential points of failure might occur. Furthermore, you will also be able to re-design these areas as needed to address those potential problems before the board ever reaches manufacturing.

Current density and current flow affect every aspect of your PCB design. The flow of signals and current is the life of any PCB, and without it, the PCB is just another board.

Proper plane current density strategies are easily achievable with Cadence’s suite of design and analysis tools. Utilizing Allegro PCB Designer enables your designs to maintain adequate voltage without overburdening your board designs with too much power.