Once upon a time, the power would have an entire layer devoted to a single voltage domain. That would be the whole solution to making everything turn on. The definition of "everything" has changed over the years. You used to be able to build and sell a WIFI router. You had a stand-alone video camera apart from your still camera. Your GPS unit was a GPS unit. A clock was a clock and your phone made calls; nothing more. That is not so anymore. Your #phone #flashlight #hotspot #timepiece #calendar #MediaPlayer #reader #GPS #NFC #WiFi #LTE #GSM #5G #Bluetooth #microphone #speaker front and rear camera, gyroscope, data storage, connect-me-to-everything-with-sensors-up-the-wazoo device has a power tree every bit as complex as it sounds and then some. 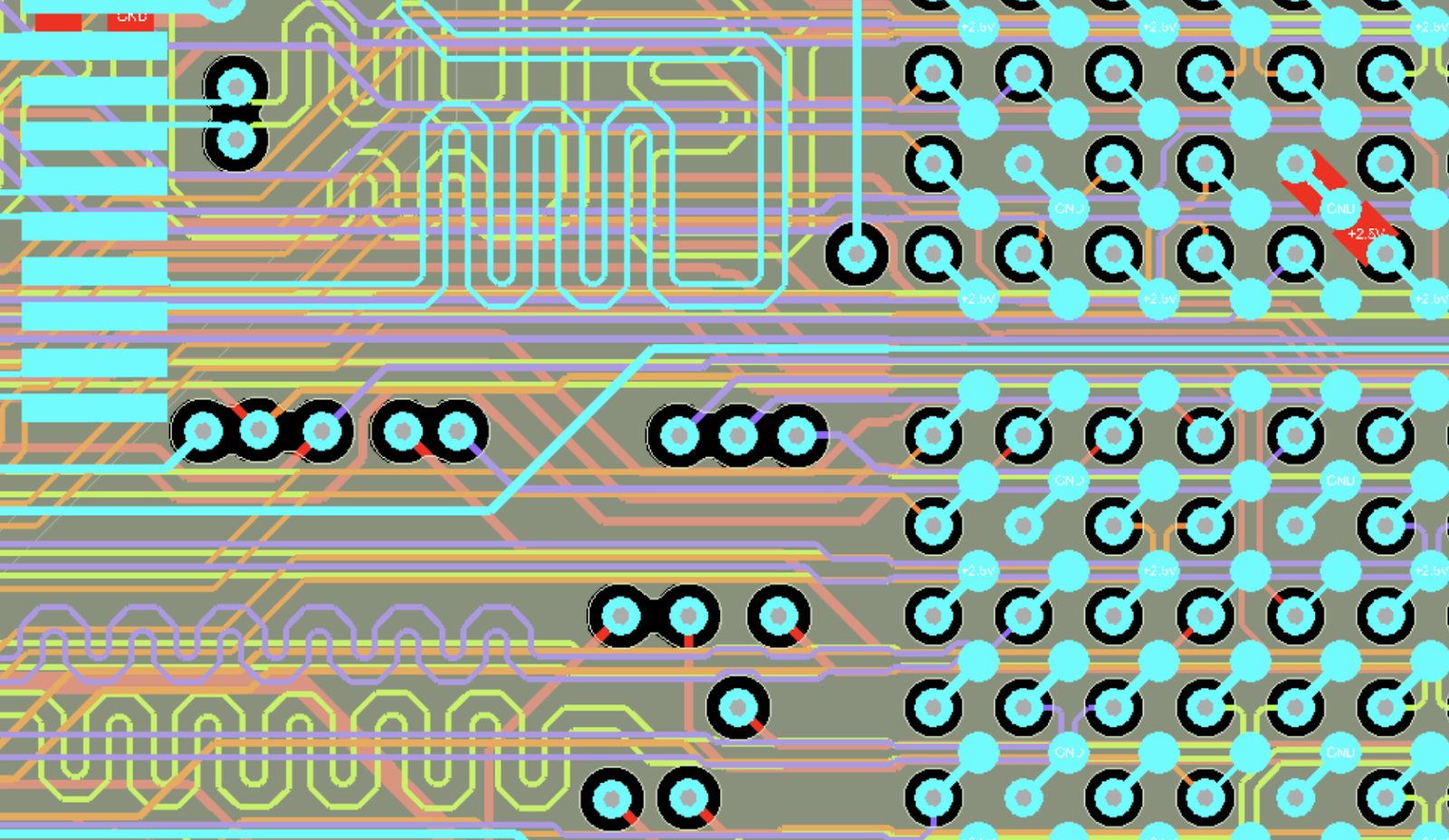 You will likely find yourself somewhere between the two extremes. The smart appliance market is centered around the assistant, and it speaks a few wireless languages, mostly Z-Wave, ZigBee and the venerable Bluetooth. A wise RF engineer told me about ZigBee. The wireless protocol is notable for really low power consumption, so it is a good place to start. With scant milliamps of current draw, thin is in. The problem with driving these devices with a big shape is the radiation from all that copper. Just enough to get the job done is the Goldilocks zone.

ZigBee has both low and high RF power options with the low power driving a 1 milliwatt RF amplifier. Even when we add an RF amplifier to kick it up to 100 mW, the duty cycle means that we're never really taxing the power supply. An EE Times article breaks it down. 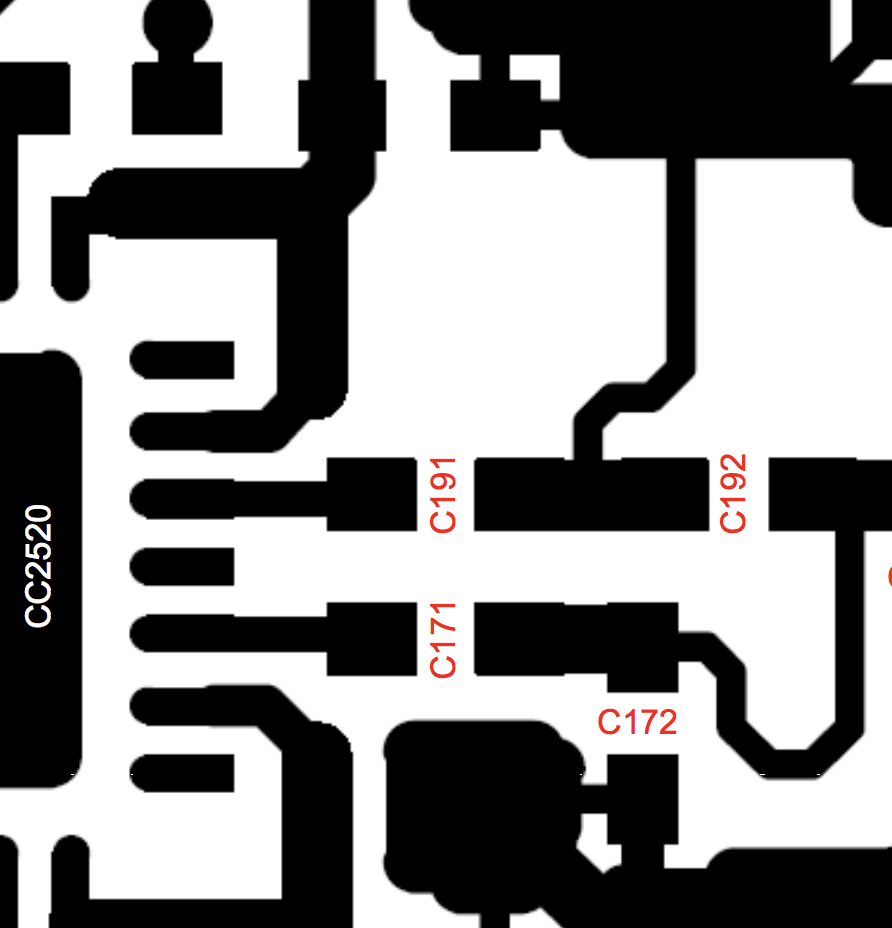 Something that wakes up, sends a burst and goes right back to sleep for 95% of its time can get by with a widened trace from the coin battery to the radio. The view of a reference design from TI shows the power coming to the pins next to C191 and C171 among others. The power flows over a trace is about 0.60 mm wide. There are also notes on the data sheet about which capacitor each power pin or group of power pins should use. This is known as "star routing". The various power pins are on the same voltage as all of the capacitors.

The connections follow a very specific clustering where one cap feeds two pins, and then three other caps feed one pin and so on. Combinations like that are then gathered like a manifold into the main trunk of the power. So we're using one voltage source but segregating it into a few different domains.

(small g) guru advice: It is more useful to highlight the individual power pins of the IC to match hot pin of the related capacitor than highlighting the entire net the same color. The colors help differentiate the connections when the rats nest may not. Maxim has this simple diagram. Bigger devices and modules can have more of the same. It can be tricky to manage verification since all the power pins are connected but not chained together randomly.

Graduating to more complex assemblies, we're faced with numerous devices or higher pin-count controllers and processors to enable the different features. The additional components and/or bigger "brains" will inevitably require more power domains. 3.3V by itself will no longer be enough.

Currents can be Dirty

1.8 volts is a common rail for things like crystals. It is usually a dirty voltage. The device may have an isolated return. The same principle as the star-routing comes into play. You have a ground pin on the mothership device that would like a separate connection to the crystal or at least one that is segregated from some of the other ground pins. Cutting a slot around the crystal that looks like a picture frame except where it is broken to allow the XTAL ground pin to "see" the device but not the surrounding circuitry is a useful technique to keep the noise bottled up. This slot can echo down through a layer or more of the board. If you have flooded ground around the outside of the crystal, you don't want ground a via right there since it will give the noise a conduit to the surface where you're likely to have some sensitive traces.

The life of a PCB designer is full of these little workarounds. Chips inexplicably pin out with aggressors and victims in close proximity. Any net with KHz in its name is likely an aggressor that makes noise at a harmonic that disturbs some other function. Those functions are receive chains first and transmit second. We take care of the RX because it is often at a low level and has a correspondingly low tolerance for noise. The TX is more robust with its bigger signal. Increasing the immunity of the victims is typically done with space and routing orthogonal to the noise source. Ground and stitching vias help seal the deal.

Reducing the impact of the aggressors takes good cap placement for short inductive loops. The datasheet will always require the cap to be close to the power pin. If there is a ground pin next to the power pin, then the same two nets on the capacitor make for an easy and effective location. Burying the voltage plane inside the board also helps contain electromagnetic radiation.

A lot of other devices also want their own voltage and usually get it from a switch mode power supply (SMPS). These are great noisemakers and should be placed near the load pin(s). They work by turning off and on with a duty cycle that creates an average voltage that is different from the input voltage but is very spiky. The spikes are smoothed out by a capacitor on the input and a capacitor/inductor combination on the output. The LC filter on the output is especially critical. The inductor holds a charge in its coils to be released downstream while the SMPS is in the off state. The capacitor regulates the rate at which the inductor discharges. The two of them define how much current you get and how quickly it is available to do work. They are well suited to low power devices and are far more efficient than linear power supplies. The efficiency of the SMPS will be north of 90%.

Linear power supplies are the old-school TO-220 packaged regulators with the big screw hole on the tab for fastening the device to the chassis or a dedicated heat sink. While the SMPS makes 3 volts out of 5 volts by turning off 40% of the time, the linear regulator will draw the 5 volts and provide the 3 volts at the same amperage by bleeding off the other 2 volts off as heat. That would be 60% efficiency and a lot of weight in passive and/or active cooling. In return, you get very clean and reliable power with a linear regulator.

There are special rules for when alternating current (AC) is brought into an enclosure. It has to be stepped down with a dedicated power supply that is set off from all of the other components by a moat in the copper pours. The Regulator Engineer has a lot to say about every aspect of the power supply and keeping it isolated from the DC section of the product. This may help explain why so many electronics rely on a wall-wart or dedicated power supply built into the cable. AC comes in, DC goes out, and everyone is happy. 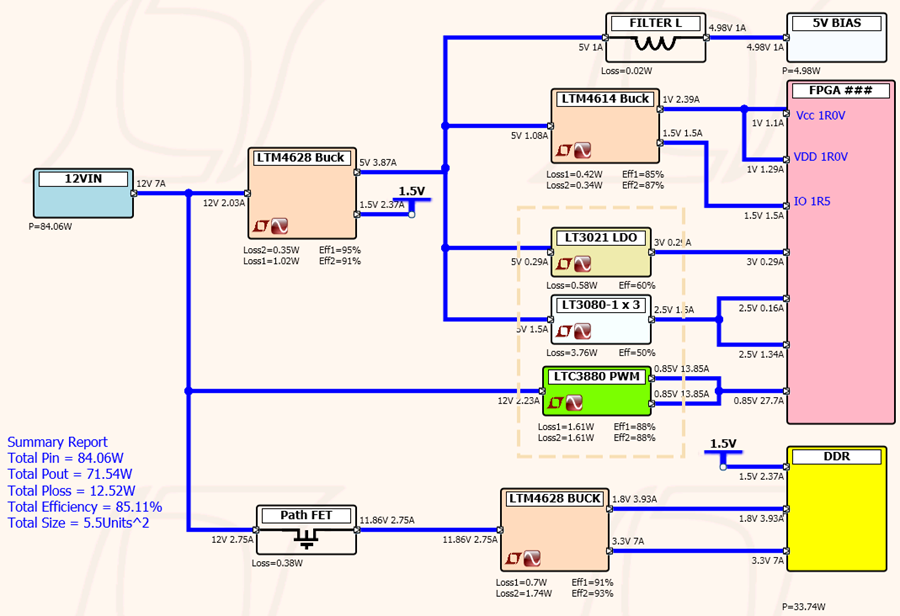 Analog Devices has this fairly simple Power Tree that includes the voltage and current draw summarized down to wattage numbers. This is helpful in determining how much copper is going to be needed for each power pin. We can incorporate minimum line widths and via quantities without over-designing the board. Severely overdesigned is better than severely under designed but not by much. Each of the boxes on the power tree will likely also involve a sense circuit. Sometimes, there is a resistor between the power and the sense circuit. Other times, the sense is simply a thin line taken from the flooded copper pour.

We pass our best efforts on to the PDN Engineer. The Engineer makes a few tweaks or a wholesale redesign depending on the outcome of the simulations. They are triggered by voltage droop on one or more domains. Their software can see the hotspots, and we can try to cool them off with a sliver of metal here or there. A few innocent vias around a choke point can disrupt the balance. Don't be surprised if it takes a few iterations when there are a lot of competing requirements.

Once we get to an all-systems-go condition, we have to try to keep everything as pristine as it was when the SI/PI team signed off. This effort often runs parallel to the high-speed and/or high-frequency design work. A good (or not too busy) SI/PI team will take another look at the end. I try to get them dialed in a few days before the wider design review. Their fixes can be complicated but cannot be ignored.

When you click on a pin and the line width is so big that your entire screen fills the color of the trace, you know you've got the trunk of the tree. The mainline power enters the board through a connector. In the case of our example tree, 12V at 7A multiplies out to 84W. What if it were 10x that? There are two potential avenues to massive current density. One is heavy copper. The fabricators are doing amazing things with 3 to 4-ounce copper. The other is to use two or more layers - relying on multiple vias for the load sharing. It's hard to make the two shapes carry similar current since one of them will always be the path of least resistance. 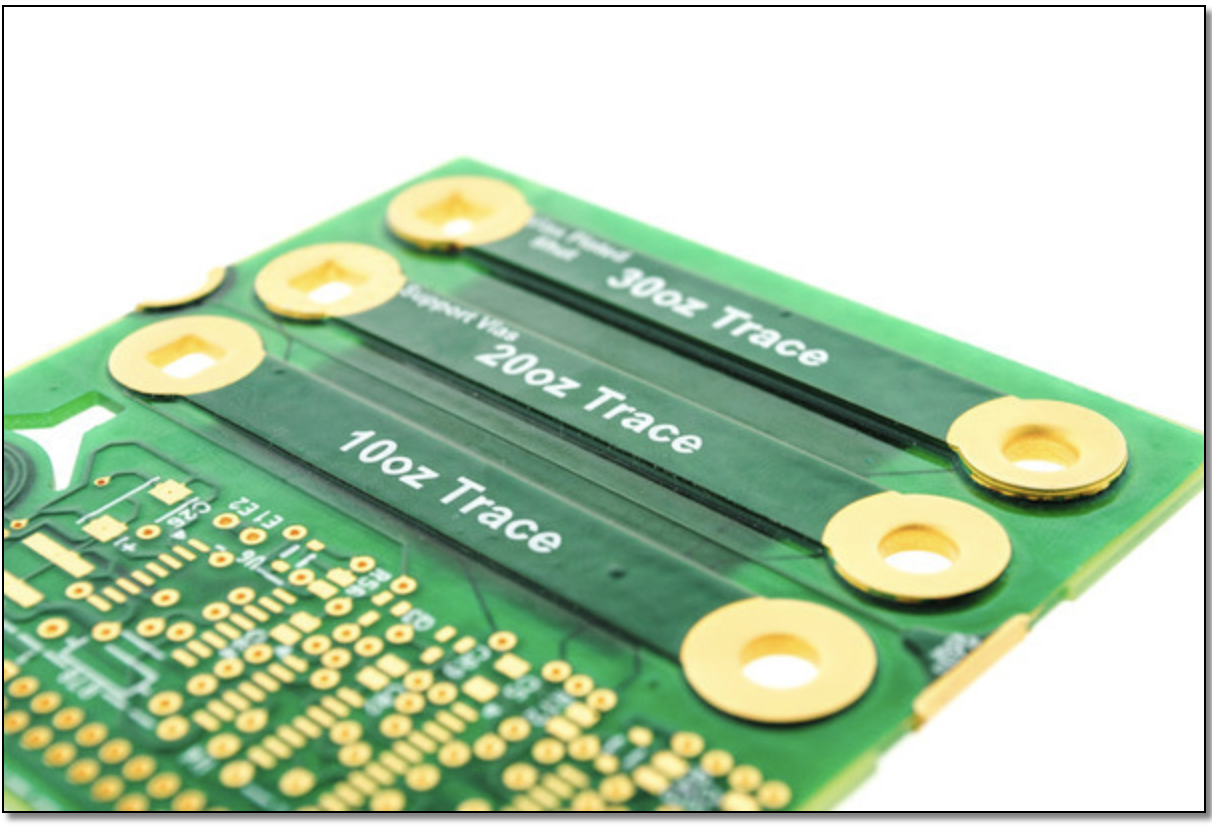 Bus bars and wires can be solutions when you have to move a lot of power from one end of a big board to the other end. It is just another component of the schematic. So-called Extreme Copper plates up even thicker for things like Electric Car batteries and Military/Industrial applications. As you can see, shapes come in all sizes and eh, shapes to meet different needs. Everything from fire safety to FCC approval will define the shapes of things to come.