DesignCON ‘21 Was One Of The First CB Related Conventions In The Covid Era. The Changes Are Apparent.

How awesome it is to be among people again, and not just people, my people, the ones who design boards and those that support them. It has been too long since a gathering of PCB Designers and related professionals was held. DesignCon 2021 was a brief, cathartic moment, a cautious baby-step towards exploring what’s new in our industry.

Lucky me to be issued a media pass. It opened one more door, the one to the press room where a few other people were tapping away on their laptops. I was a little out-of-place with just my phone but I’ll know what to bring if I get lucky again. Wow, free hand-sanitizer on a carabiner so you can hook it to a belt loop. The other perk was two carts with coffee and tea so I had one then the other.

After several years of being held in Santa Clara’s convention center, DesignCon 2021 moved to downtown San José. The immediate area is a bit of a food-desert until Original Joe’s opens at 4:00pm. It would have been wise of me to get the free lunch but I was chatting up the vendors with entire rows to myself. I hope that they move it back to Santa Clara next year since that one is only two miles from my house; walking distance. 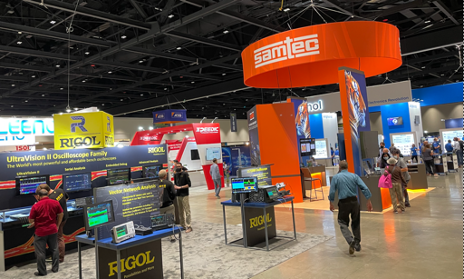 Figure 1. Image Credit - Author: There was the typical variety but the biggest displays were again by the connector vendors.

You may have heard about a mass shooting by a long-time employee of the Light Rail system back in May. Well, since then, not one trolly has run the route. It takes a little longer by rail but it would have been nice to avoid the drive and the $20.00 parking fee. I’m not trying to be insensitive to the victims and survivors, just stating that a tragic and unforeseeable event shut down the public transit option.

Travel difficulties related to Covid 19 also affected vendor participation with some of the booths unoccupied because of company policy against unnecessary travel. Polar was one of the outfits that I wanted to interrogate but could not for that reason. If there was an upside to the lower headcount, it would be that the vendors were not swamped. Getting their attention was easy. People were respecting social distance and not massing together.

Perhaps, the vastness of the San José McEnery Convention Center compared to the crowd was by design. Otherwise, they overshot on the amount of space needed. The images I’m sharing are a best effort at making it look cosy. The break-out sessions seemed to be roomy by design as well. You get what you pay for and I only went to a couple of the free ones. My goal was to bring home some data sheets and technology road maps that will be of use to me as a designer who is once again in the consumer electronics sector. 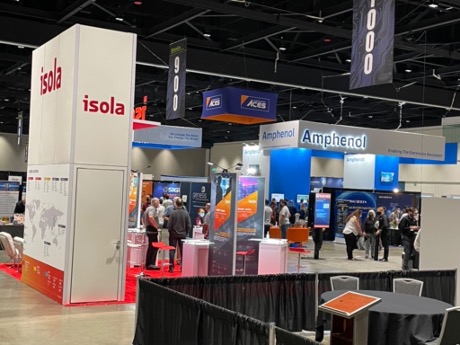 The folks at Isola were promoting their new materials. After all of these years in the RF business, they are taking aim at the high-speed digital market. Of course, they want the top of that market, the data centers. They have a newfound focus on thin dielectrics as well as the smooth copper finishes required for the 100 Gigabit per second and over applications. Those people and many others have my e-mail address now so here comes the advertising blitz.

I had a pre-planned meet-up with someone who has been messaging with me for over five years now. That’s just how long Linkedin keeps the messages. Robert Finley, CID12 was very gracious as I was giving him tips that you will not find in any tutorial. Let’s say that I’ve developed a number of odd habits working in the shielded confines of analog designs.

There was also a chance meeting with Brian, an antenna guru that was on the Chromecast team back in the day. The rumor that I’d heard is that he “called in rich” one day. That’s Google-speak for early retirement. The fact is that he joined a start-up in order to change the world for the better. He’s just that kind of a guy so it wasn’t too surprising to learn.  Like I said, it was good to be around my people. 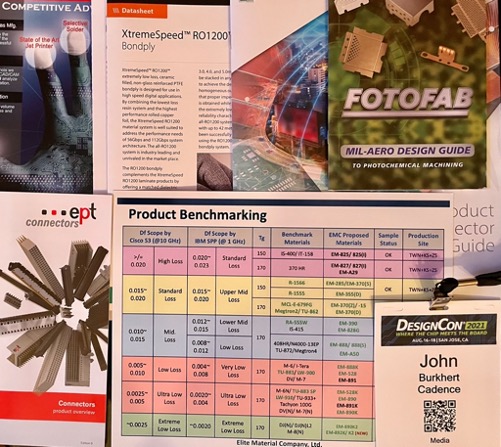 Figure 3. Image Credit: Author - A collage of printed material from the expo.

The most unusual part of the exhibition was a pair of autonomous cars. It was nice to see Velodyne Lidar sensors mounted to the self-drivers. Most people would be surprised at how many printed circuit boards there are behind the lens-ring of one of those things. The inventor of the mechanical lidar is very creative. Those of us who know the usual PCB design rules would not have come up with anything like what he did.

In any case, the chance to gather some information and mingle with like minded people was a welcome relief from the isolation that we all endured in recent times. When all of this started, I kept going into the office until Microsoft made staying home mandatory. My favorite Cadence reseller, EMA Design Automation, had a booth at the convention. It was the closest I’ve been to an office in over a year.

DesignCon 2021 is officially in the books and will likely be a template for PCB West in early October. Lots of space, security and technology for the ones brave enough to venture out. While not up to the pre-pandemic level, the gathering was good for me. The promoters were good to me so I hope they came out ahead on the deal.

As an addendum, trolly service came back on line for the NFL season so we are once again connected by rail.