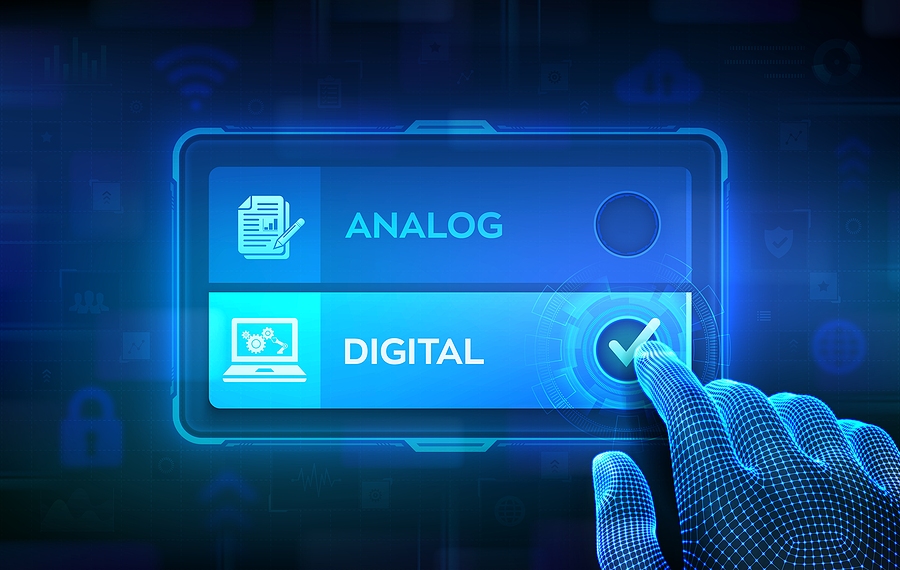 ADCs are the backbone of mixed-signal systems as they represent the border between the digital and analog worlds. Many components like microcontrollers and SoCs might contain an ADC built into the component, but for some applications, it may be preferable to use an external ADC. This is especially true for precision measurements, where high accuracy is needed for a low-level signal in a noisy environment. The general application area for this usage is in sensor interfaces, but this spans into areas like motion control, scientific measurements and monitoring, and many other areas.

An ADC has several important specs to be considered before jumping into a particular component. In this article, we’ll look at some of these specifications with an eye on selecting a component for precision measurements in a mixed-signal system. As we’ll see, sample rate and resolution are not the whole story, and there is some analysis of signal behavior needed to ensure your ADC selection can provide the required accuracy for signal reproduction.

In the following list of specifications, we’re considering an individually packaged ADC that you would place separately from the main processor in your mixed-signal system.

The first two specifications that designers usually look at are sample rate and resolution. If you’re sampling a moderate level signal with high SNR value, then you can usually pick an ADC based only on these two specifications. However, there are instances where many other specifications take precedence as the goal is very accurate signal reproduction or noise rejection.

One technique that can be used to remove frequency content above the Nyquist frequency is to over-sample the input signal and digitally remove the higher-than-Nyquist components with an anti-aliasing filter. This is one way to balance the need for noise rejection with high resolution. If you expect noise to be present at higher frequencies than the Nyquist frequency, make sure to include an anti-aliasing filter in your signal chain.

All ADCs have an input range, which is essentially the maximum and minimum voltages that can be measured as a peak-to-peak value. When we compare the ADC’s input range to the actual dynamic range of the signal to be measured, it is possible that the ADC is only using a very small number of bits to measure the signal.

To see why this is important, take a look at the graphic below. Here we can see that, when the input sine wave has low amplitude, it could fall between a small number of bits. In such a case, the signal readout will not accurate represent the time-domain characteristics of the signal because the effective resolution is very low. 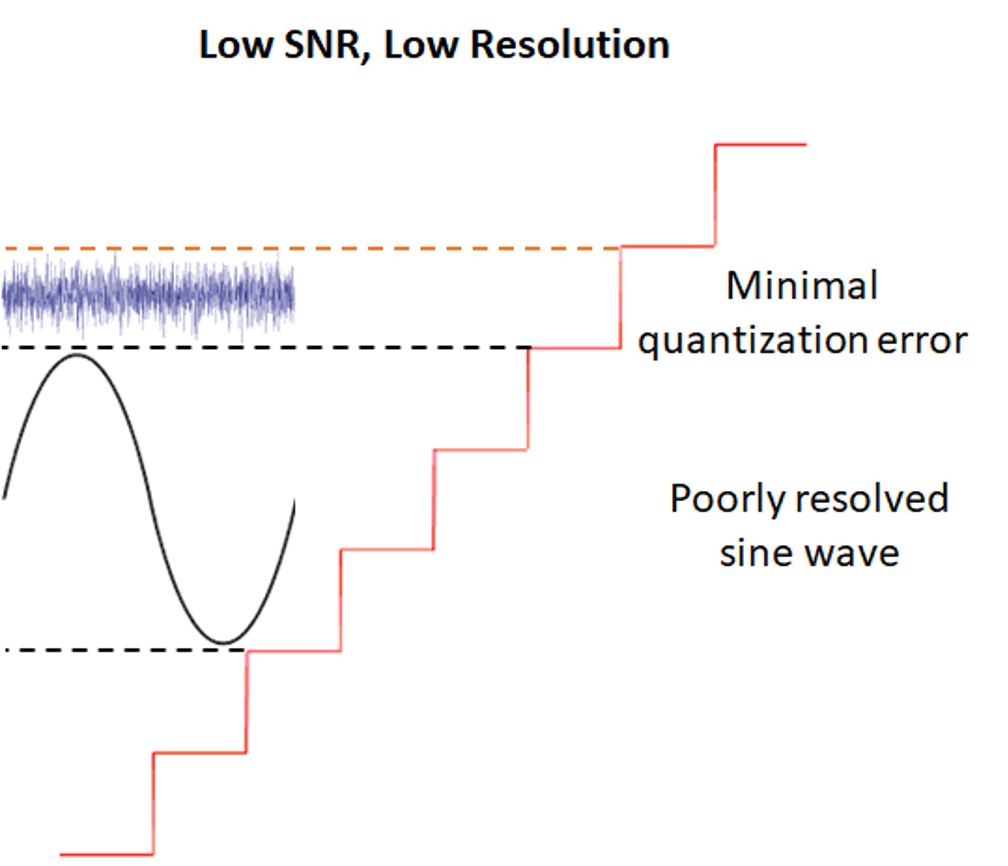 To compensate for the above situation, your instinct might be to select an ADC with higher resolution. Unfortunately, this might lead to quantization errors, especially if the analog SNR value is low. We can see this situation with a signal and noise (same SNR as above) in the graphic below: 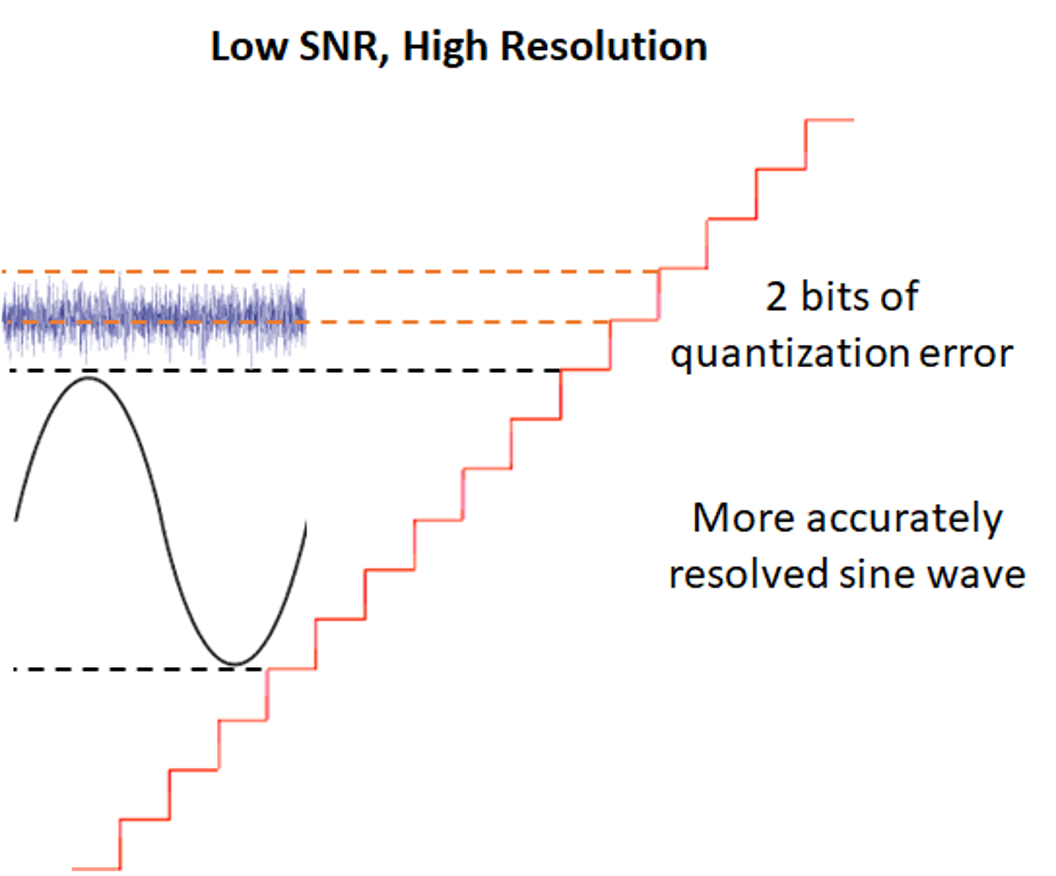 The number of bits that is actually used for measurement in the above situation is more appropriately known as the effective number of bits (ENOB). This value can be calculated using the SNR value with noise and distortion (SINAD, in dB) with the following equation:

If there is no noise or quantization error, then SINAD = 6.02*(number of bits) + 1.76, and ENOB will be exactly equal to the number of bits used to define the ADC’s resolution. In general, ENOB can be a positive real number (non-integer) in real systems. For high-SNR signals that have a large dynamic range, you will not have problems with quantization in high-resolution ADCs, but only as long as the ADC’s quantization step is larger than the noise figure.

If you want to increase measurement precision for a low-SNR signal by increasing ENOB, there are three options:

#1 is generally impractical when the SNR value of your signal is low because the quantization range will become much smaller than the noise dynamic range. As a result, you end up with huge quantization errors. A better approach to measure low-SNR signals is to use #2 and #3 together. It is quite common to see complex filtering stages in devices that require measurement of a harmonic output from a sensor, such as in precision motion control and tracking.

In general, most designers will be aware of single-ended ADCs, where the input is referenced to the GND pin on the ADC. These types of ADCs are built into microcontrollers or other processors. However, there are also differential ADCs, where the input is a differential pair. Note that a differential ADC could be used to sample a single-ended signal by tying the negative polarity terminal to GND as long as this difference signal falls within the ADCs dynamic range.

Some ADCs will have multiple channels that can be used to sense multiple signals in the same component. These channels are normally sampled sequentially (in succession), although there are some ADCs that allow simultaneous sampling of their channels. Because sampled data is normally output from these devices over a serial interface, the output data will be provided to the system controller in frames and you may need to write a custom driver to retrieve sampled data from each channel. 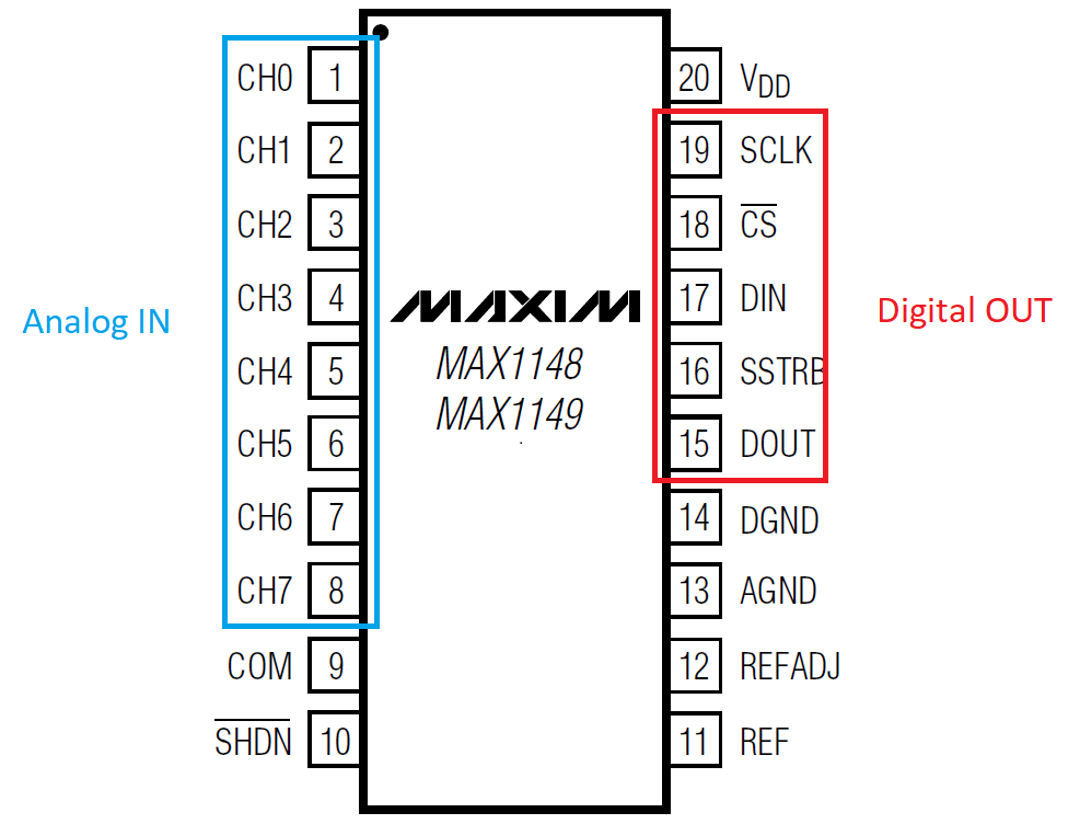 In the ratiometric method, the voltage source used to power the component and its readout circuitry is also used to set the reference voltage. The reference may be stepped down to the required value with a precision resistor divider (see the diagram below for an example). To learn more about ratiometric ADC referencing, read this article[1] . 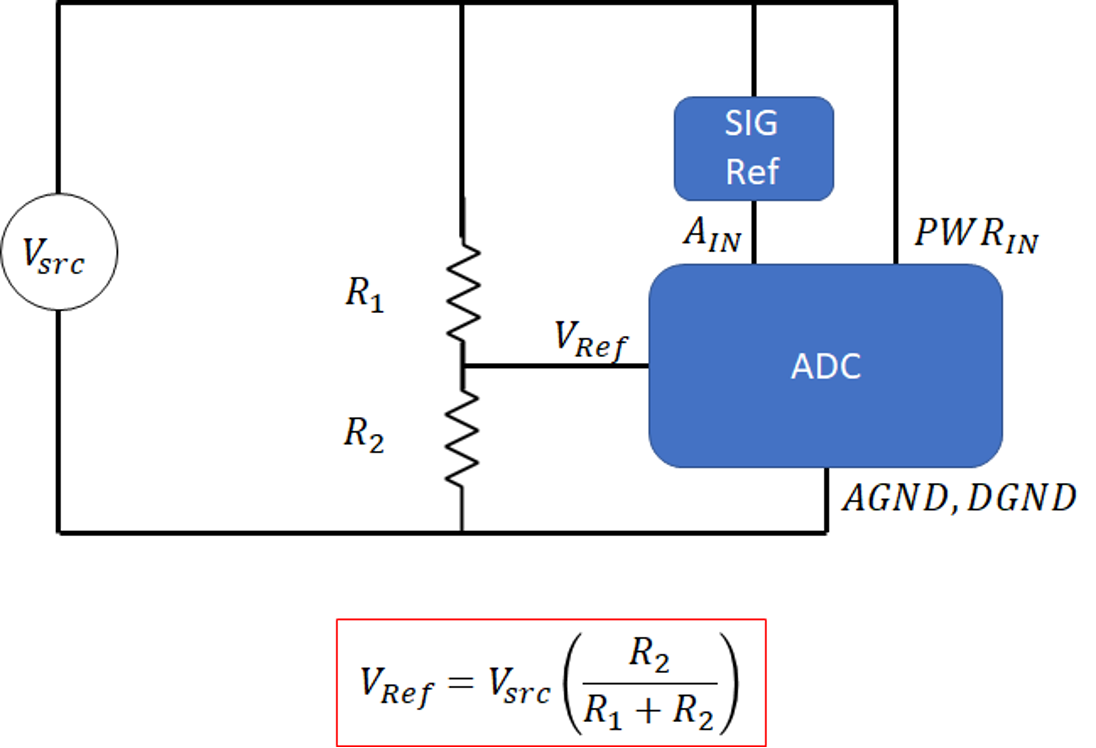 External precision reference chips are a much better option when high precision and better immunity to thermal fluctuations are needed. These chips can be very rugged with low drift and low temperature coefficient, so they will be much more stable than the power source used in the system. For some analog applications in harsh environments, such as aerospace and automotive, a precision reference may be preferable as they can help ensure accurate measurements without an additional temperature correction scheme.

Once the input signal has been converted into a digital number, it needs to be output through a digital interface to a processor. The following output interfaces are normally available:

If you do some proper floorplanning around the output interface, you will not have to separate the digital and analog grounds into different sections and reconnect at one point. In fact, it is recommended that you not do this except in certain cases where frequencies and analog SNR values are low. We’ll discuss this in another article on PCB layout for ADCs.

When you need to select your ADC, place components, and route signals in your PCB layout, make sure you use Allegro PCB Designer, the industry’s best PCB design and analysis software from Cadence. Allegro users can access a complete set of schematic capture features, mixed-signal simulations in PSpice, and powerful CAD features, and much more.