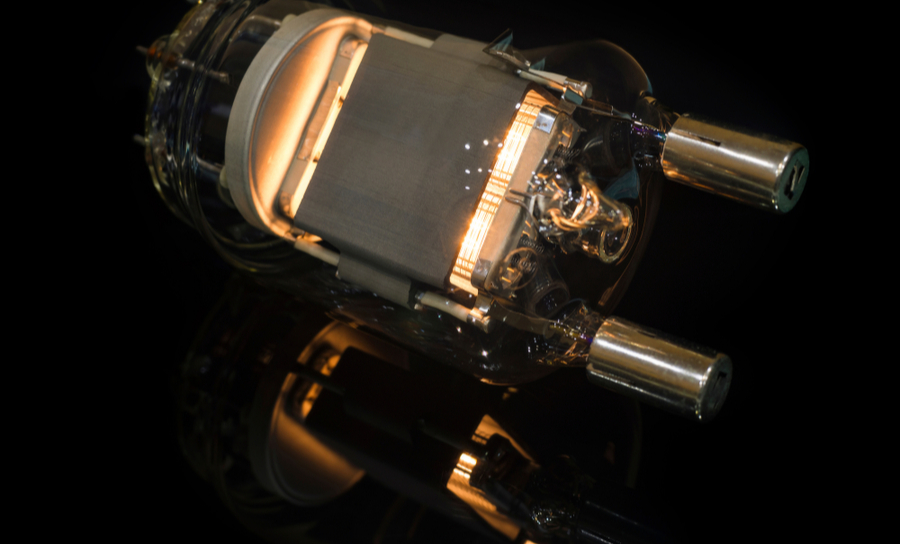 Hysteresis is one of those concepts with a fancy name and a deceptively simple meaning. Many physical systems, including plenty of electronic components, exhibit hysteresis. In essence, the state of the system depends upon events that occurred in the system at all previous points in time. Although this might sound like an odd occurrence, it is common and very useful in a variety of electronic circuits. You can take advantage of hysteresis in analog circuits and even build hysteresis into your circuits using feedback and saturation, providing plenty of useful functionality.

What is Hysteresis Phenomena

An Example: Operational Amplifiers vs. Comparators

Hysteresis in analog circuits is useful for controlling switching in circuits with saturation (i.e., transistors), although it is undesirable in some circuits. As an example, hysteresis can be purposefully added to a comparator circuit as it can be used to set the duty cycle of the output waveform.

If this sounds odd, then you can consider two fundamental (and seemingly equivalent) components: comparators and operational amplifiers. Note that an operational amplifier can be used as a comparator, but not all comparators act like amplifiers, thus the two terms are sometimes used interchangeably. Hysteresis plays an important role in both circuits, and understanding these circuits provides circuit designers with a baseline for understanding the use of hysteresis in more advanced circuits.

If we compare two common ICs with these components (LM324 and LM339), it becomes easier to see how hysteresis plays a role in some analog circuits and can be used to control the desired switching behavior in these circuits.

As an input analog signal continuously changes at the inputs in either circuit, this induces switching behavior at the output. The output can switch at different input voltages in the presence of hysteresis. This difference is seen when one compares the output as the input rises or falls. Similar behavior can be seen when there is hysteresis in analog circuits with other elements, particularly in nonlinear circuits with saturation.

Hysteresis in an Operational Amplifier

Hysteresis in a Comparator 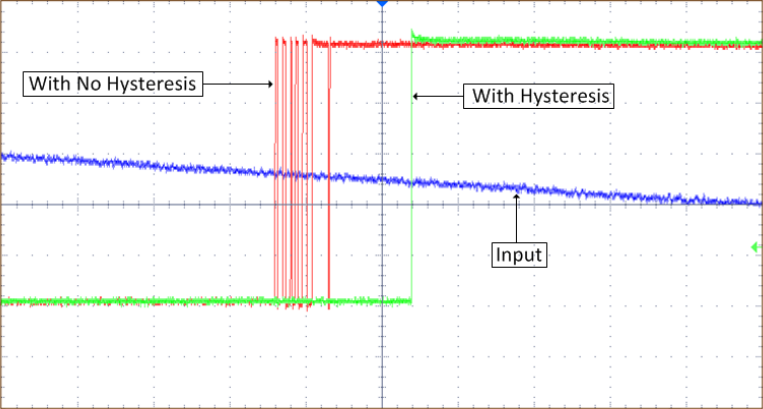 This added hysteresis can also be used to define the duty cycle of the output square wave, depending on the exact shape of the input AC waveform (i.e., charging/discharging capacitor or a sinusoidal waveform). When the input is rising, it forces the comparator to switch at a different voltage than when the input is falling. This is because the feedback loop sends some current from the output back to the input, which changes the magnitude of the signal seen at the input.

The fundamental tool for analyzing hysteresis in analog circuits is a hysteresis loop. In a hysteresis loop, you can visualize how some output characteristic (e.g., the voltage and/or current) changes as the input signal changes over a predetermined range of values. This type of graph can be easily constructed from two temporal waveforms for the input and output signals. When the output is graphed as a function of the input, you should see a loop that is similar to what one would observe with a Schmitt trigger circuit.

Whenever you are incorporating hysteresis in analog circuits, you need a strong circuit simulator that helps automate a number of important analyses like plotting a B-H curve of a core, for example. A B-H curve tells how the magnetic properties of used materials responded to outside magnetic forces. 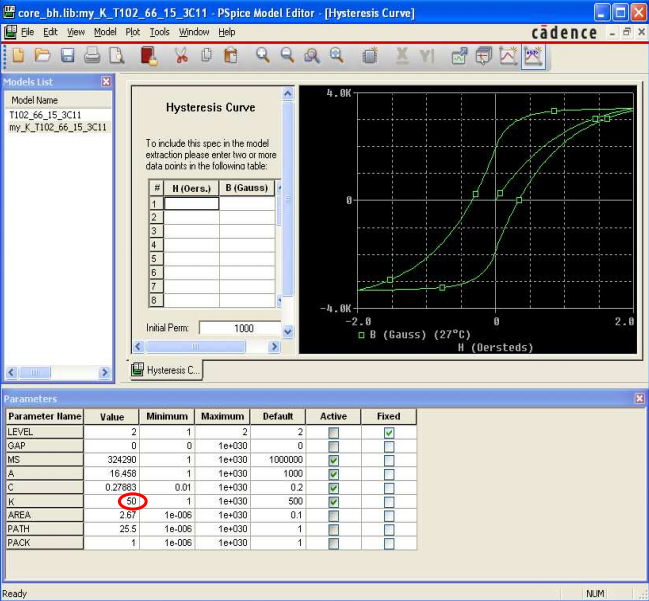 Managing a hysteresis curve is easy with PSpice’s Model Editor

Using PSpice Designer for OrCAD can help you analyze your designs as they become more complex. This unique set of features takes data directly from your schematic and gives you a full view of the behavior of your circuits, even B-H curves can be plotted easily.