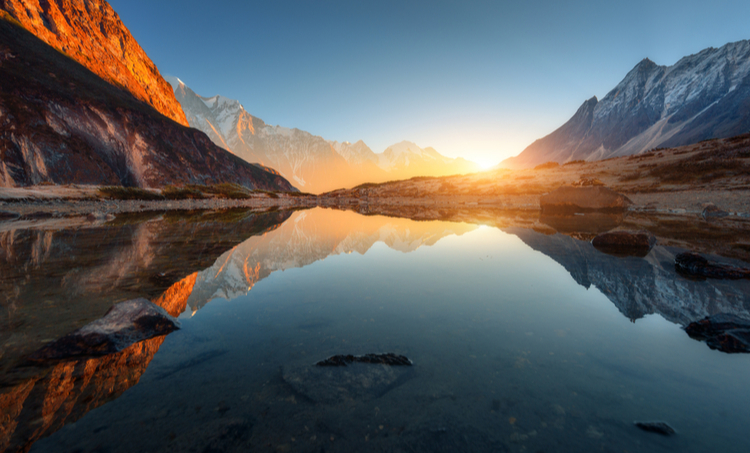 Plane waves reflecting off of water are described with a reflection coefficient.

All transmission lines are media used to direct propagation of an electromagnetic pulse or wave. It doesn’t matter whether we are dealing with digital pulses or harmonic AC waves, an incoming wavefront of an electromagnetic wave can reflect off of the interface between two materials. In optics, we say this occurs due to refractive index contrast. In electromagnetics, we say that this is due to a mismatch between the dielectric constants of the two media. In electronics, this is due to a mismatch in impedances (note that all of these quantities are related!).

Definition of transmission line reflection coefficient at the load.

Definition of transmission line reflection coefficient at the source.

In reality, the reflection coefficient is never equal to zero at all frequencies, which is why we use S-parameters, specifically S11 or return loss, to describe reflections over a broad range of frequencies.

S11 and return loss are closely related; the two quantities are reciprocals of each other. Most RF designers are familiar with the formula for return loss:

The input impedance and S11 (return loss) are both related to the transmission line reflection coefficient. Real S-parameters are complex functions of frequency and can have a complicated set of resonances/antiresonances; an example for a transmission line connected to a 1 pF load capacitance terminated to 50 Ohms is shown below. 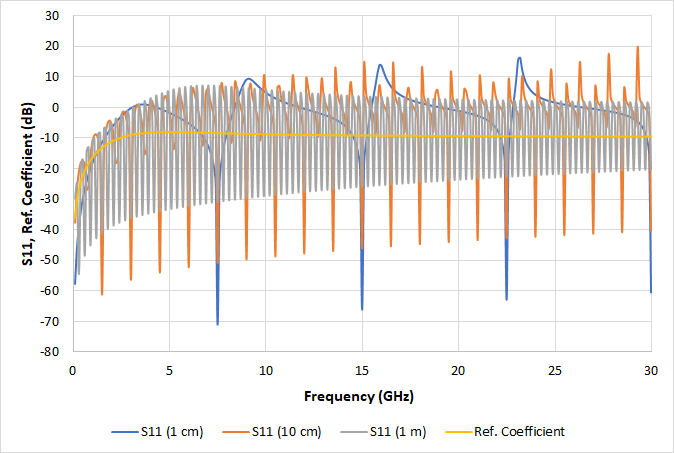 Comparison of S11 and reflection coefficient at the input to a load component with 1 pF input capacitance.

Here, we see that the transmission line acts like a typical resonator cavity and has a definite resonance structure when the line is very short. Eventually, as the line gets longer, losses start to dominate, and the resonances in the S11 spectrum start to disappear.

From the above graph, it should be obvious that if we lengthen the line out to infinity, we’ll find that the input impedance at each port reduces to one of the standard reflection coefficient equations shown above. For real transmission lines operating at practical frequencies, you must describe signal behavior in terms of the input impedance and S-parameters, particularly when the line is short.

S-parameters are the standard tool for describing reflection and losses in a propagating signal as it travels through a channel. If you want to extract all the information needed to understand your interconnects, you can use the following process to determine S-parameters and input impedance of your transmission lines:

With this process, you’ll have the input impedance and S-parameters for transmission lines in your PCB layout without the need to gather measurements.

When you need to analyze signal attenuation and reflection in your transmission lines, you need to use the best PCB design and analysis software. Allegro PCB Editor from Cadence integrates with the S-parameter extraction features in Sigrity Extraction and includes a complete set of PCB design and layout features. You’ll have a complete set of design features for building and optimizing your next high speed/high frequency system. You can also use InspectAR to accurately assess and improve PCBs using augmented reality and intuitive interaction. Inspecting, debugging, reworking, and assembling PCBs has never been faster or easier.