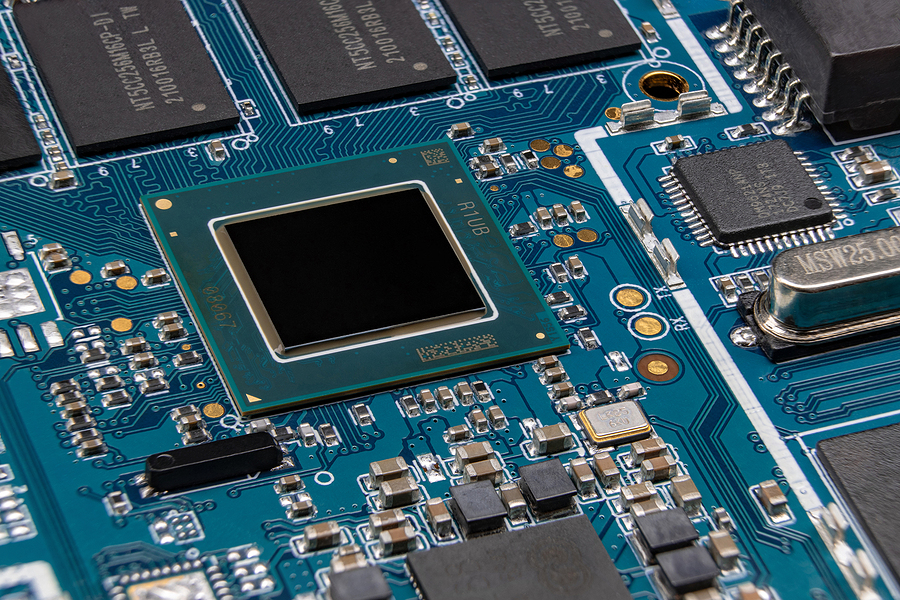 With recent advances in additive fabrication technology and processes capable of copper deposition with very fine linewidths, the substrate-like PCB market is projected to grow significantly over the coming decade, according to market research reports. These designs push features sizes far below what you would implement in an HDI PCB, and they require a new approach to materials and DFM rules to ensure success.

Substrate-like PCBs get their name from the fact that they are so similar to the IC carrier board used in semiconductor packaging. The IC carrier board is a high-tech circuit board bearing one or more chips and other circuitry linking the semiconductor die to the package land pattern. Although substrate-like PCBs are venturing closer to the feature sizes seen in IC carriers, they are still considered PCBs since they have both active and passive components.

These components are considered to be the next generation of high-density rigid PCBs. In terms of linewidth and trace spacing, these components sit somewhere between standard HDI processing and the micron-scale features found in IC substrates. Substrate-like PCBs generally make use of thin wires for routing signals and internal planes for power and ground, just like you would see in a traditional PCB. The main difference is that the length scales are smaller, as outlined in the table below.

Where Are Substrate-Like PCBs Used?

One of the major drivers of substrate-like PCBs has been the mobile device market. Electronic devices like tablets, smartphones, and wearables are getting more sophisticated in terms of overall device construction and the design of the internal PCBs. This means the internal chipsets are getting smaller in order to pack more features into a smaller area. In addition, newer enclosure designs and larger batteries are forcing a reduction in board size.

As an example, Samsung and Apple recently implemented substrate-like PCBs with linewidth/spacing of 25/25 μm and 30/30 μm in their devices. Substrate-like PCBs for smartphones can accommodate twice as many electronic components as HDI boards in the same space due to the smaller linewidth. The components used in these products have also been getting smaller, with some simpler components and chips being in very fine pitch BGAs packages. The SoCs in these devices are also integrating more functions and having higher I/O density, which eliminates many peripherals that would normally appear in these devices. Chinese smartphone manufacturers Oppo, Huawei, and Xiaomi are also likely to start using substrate-like PCBs in their products.

Thermal conductivity in substrate-like PCBs matters primarily due to the application area, not because they can have trouble dissipating heat. With mobile being the big driver of substrate-like PCBs, the chipsets and environment where they are used create high temperatures in the board and components. Materials targeting the substrate-like PCB market need to have high thermal conductivity to ensure heat can be moved away from hot components. These boards will often use a thermal interface material that bonds the board to the enclosure, causing the device enclosure to act like a large heatsink.

Substrate-like PCBs still use standard interfaces that target a 50 Ohm trace impedance (or a differential value) for high-speed traces being routed on the PCB. Because layer counts can be very thin, the Dk value needs to be chosen appropriately to set the linewidth to the required size. Larger Dk values will require smaller linewidths to hit an impedance target for a given layer thickness. For a 1 mil thick substrate material, a 50 Ohm microstrip trace would require a width of approximately 2 mil (50 μm) on Dk = 4 in the substrate.

Substrate-like PCB materials are pushing Dk values lower to enable wider single-ended traces where needed, but this also enable thinner layers without pushing linewidth values below the typical minimum available in substrate-like PCB fabrication processes. These are some of the same considerations one would weigh when designing with high-frequency materials in standard PCBs.

When you’re ready to design your HDI PCBs, substrate-like PCBs, and packaging, use Allegro PCB Designer, the industry’s best PCB design and analysis software from Cadence. Allegro users can access a complete set of schematic capture features, mixed-signal simulations in PSpice, and powerful CAD features, and much more.