Mixed signal circuit design revolves around the way data is stored and transmitted between the two modes.

Electronic inputs and outputs can be represented as either analog or digital signals, depending on the mechanism by which the component accepts and sends a signal. While either format has its individual strengths, the true power in analog and digital design arises when the two styles are married. Individually, both of the signal systems can communicate only within their respective domain, but through the use of a digital-analog or analog-digital converters (DAC and ADC, respectively), it is possible to interface between the I/O of components that otherwise would be locked into a single mode. This union allows a tremendous amount of flexibility in design and development, offering users the best of both worlds when it comes to data acquisition, storage, transmission, and other essential signal characteristics.

However, there is no such thing as a free lunch in mixed signal circuit design. The combination of analog and digital circuitry needs and operational requirements can lead to a design that is fighting its own performance if the designer is not careful. To ensure best practices are maintained for both analog and digital systems, some seemingly paradoxical design tenets will have to be employed. Though this mixed signal approach may differ from a traditional board layout, the ultimate goal of maximizing signal integrity remains the same.

Mixed signal design refers to the integration of digital and analog circuitry within the same board. Broadly speaking, analog signals originate outside the domain of the board and have to be translated to digital signals; this excludes digital signals transferred in the form of a myriad of different data protocols. While mixed signals can coexist, care must be taken to properly insulate aggressor and victim signals from one another to prevent unnecessary noise. Typically, it is analog signals that are more liable to the effects of digital due to the latter’s fast-switching nature rather than vice versa. During design, this manifests as the central philosophy behind the mixed signal design: isolation. The layout should take note of the analog and digital circuitry, which is ideally demarcated by the engineer in the schematic.

Layout planning is crucial for any design, but takes on extra performance for the realm of mixed signal design. Boards without mixed signal constraints do not typically have to worry about the interaction between signals in such an all-encompassing manner. While layouts take the precaution to avoid excessive coupling or routing too close to switching nodes in power systems and other common aggressor lines, mixed signal planning can feel like the collision of two distinct boards being forced into the confines of a single space. To alleviate this, design needs to encourage separation between the analog and digital circuitry as a central step of the layout placement preparation stage.

While there are many factors to consider and balance during layout, designers can begin by dividing the board into digital and analog regions. A layout in this fashion also dovetails with the I/O functionality of analog and digital, respectively: the high-impedance analog inputs and high-speed digital outputs will gravitate towards the opposite edges of the board, forming an easy-to-follow design flow. From there, the most aggressive or sensitive signals should be placed as far away from the center as possible to minimize the possibility of interaction. Working inward from the extreme ends of the digital/analog divide, the more centrally located circuitry and components will be those less susceptible to any coupling, crosstalk, etc., ultimately arriving at the crossover point between the analog and digital systems.

How to Resolve Layout Issues in Mixed Signal Design

There are numerous layout techniques to encourage best practices for signal propagation in a mixed architecture. The issues encountered during design can operate between the system level (beginning with floorplanning/placement) and the physical features of the board, up to and including the interconnects. Some common implements used to isolate analog and digital in a mixed signal board include:

The question that flows naturally from the isolation of the digital and analog ground is how to tie them back together. Generally, a single node will represent the union of the two reference voltages, but the implementation can be seen as a choice between digital-in-analog or vice versa. The former philosophy lends itself to much better performance, as the analog ground is far less likely to experience significant transient voltages (for the reference plane) at any given moment. Whether slow or fast analog speed, analog signals by nature have significant bands on the total fidelity when it bumps against the upper and lower limits of the technology. Digital has no such reservations and is able to rapidly climb and dive to high and low voltage thresholds within nanoseconds. By designing the overlap in the circuit around the more constrained of the two reference planes, it’s much easier to ensure that the more vulnerable signals are adequately protected. 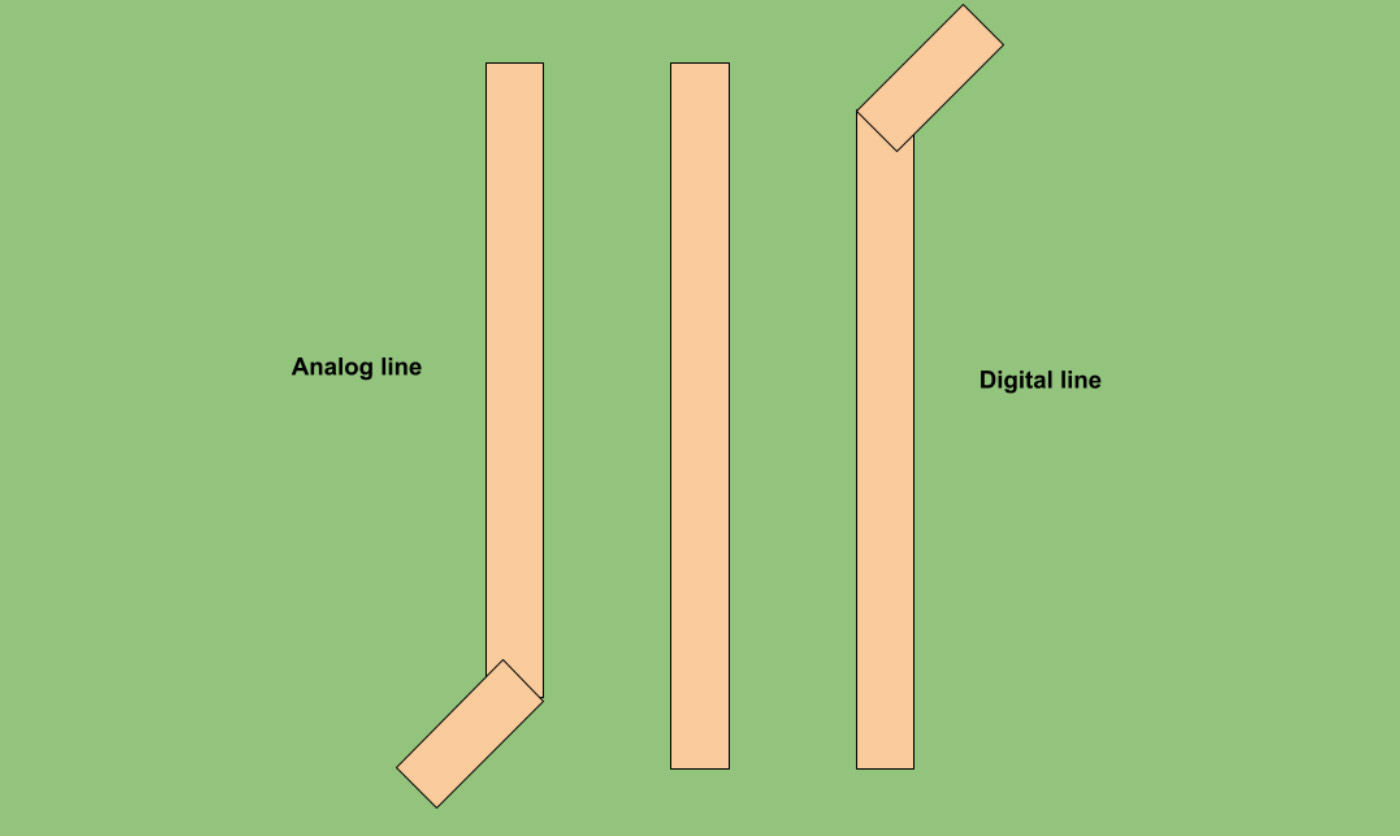 The Overwhelming Importance of Ground in Mixed Signal Systems

The return plane takes on something of an expanded role with the presence of the two functionally similar yet separate grounds. Minimizing the return path while providing a consistent reference is a major design factor in any practical board design; overlooking or overriding the ground plane’s role to constrain the energy of the electric fields is a significant cause of EMI leakage and other thermal and electrical issues. If that wasn’t concerning enough, an insufficient ground may lack the ability to regulate temperature as a thermal sink, resulting in damage to the components or board, or even worse, surrounding operators and property. Although the ground plane design is key for any board, designers need to understand the additional wrinkle that mixed signal considerations offer to the calculus.

The role of ground can be a significant point of discussion during the design process. After all, if ground is ground, what is the purpose of the respective ground for each side of the mixed signal? While properly designed reference planes are for all intents and purposes identical to any other, the problem arises from the inherent noisiness in fast-switching digital signals. Without mitigation techniques, this noise can easily couple with the more sensitive analog signal return paths, resulting in unstable performance.

Perhaps the most dangerous attempt at solving the two grounds of a mixed system is designers fashioning a return layer with a gap separating the two ground planes. While the impetus behind the decision may seem sound, the reality is that a gap in the reference plane coverage causes return currents to form much longer and circuitous loops, resulting in EMI emissions that could lead to failure during testing. Even worse, return paths for an analog or digital device may find their most unintentional (from the perspective of the designer) direct route through the pins of the alternate mixed signal mode. Seemingly small adjustments, such as reshaping the copper planes/shapes to narrow the space where analog and digital references meet, can have the effect of making high-density current areas, leading to possible material stress and failure if the design lacks the ability to adequately remove heat.

Large, unbroken planes with a minimal concavity at the perimeter allow current to adequately spread through the plane while following its path of least impedance. The only additional consideration that needs to be made for a mixed signal system is the interaction between the digital and analog ground. Assuming layout has roughly separated the analog and digital circuitry, with a particular emphasis on the most incompatible I/O analog and digital signals, routing over either of the two reference planes should be identical and lack any meaningful distinction. 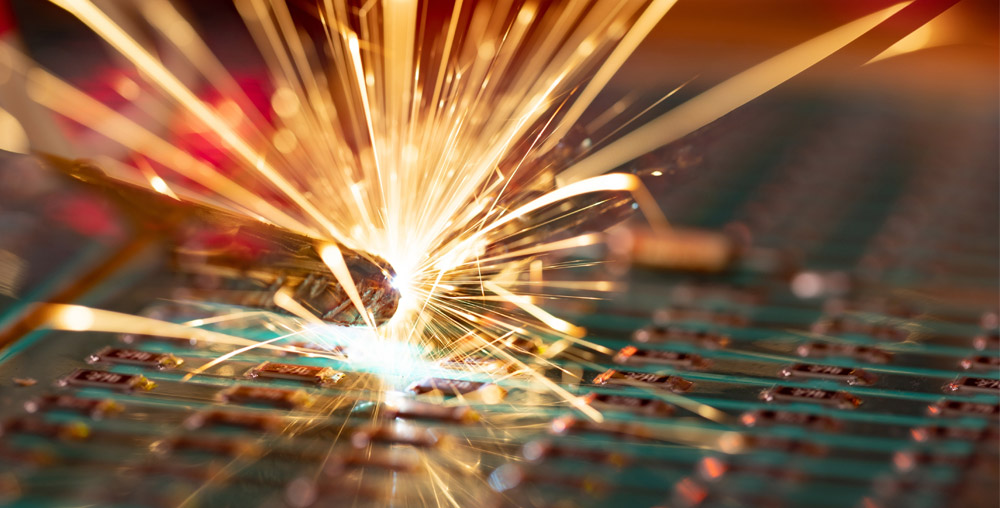 Inadequate ground design is not always this exciting, but it can be equally destructive.

Mixed signal circuit design does not differ tremendously from standard design – even the greenest of designers likely have some level of familiarity with the underlying concepts. Whatever your level of expertise, Cadence offers a comprehensive PCB design and analysis software package that can cover all the needs of mixed signal circuit design. As PCB feature density and complexity of design trend upwards, OrCAD PCB designer helps ease the design process; with its intuitive UI, designers don’t have to sacrifice features and power for an easily navigable software layout solution.